Posted by Sama in Fashion On 8th January 2018
advertisement

Desmond Napoles knows what he prefers in life, he knows what he desires and most importantly the 10-year old is comfortable in his own skin. Wanting the world to follow his steps and give them the confidence to accept themselves the way they are, Desmond has started a drag club exclusively for kids with no adults allowed. 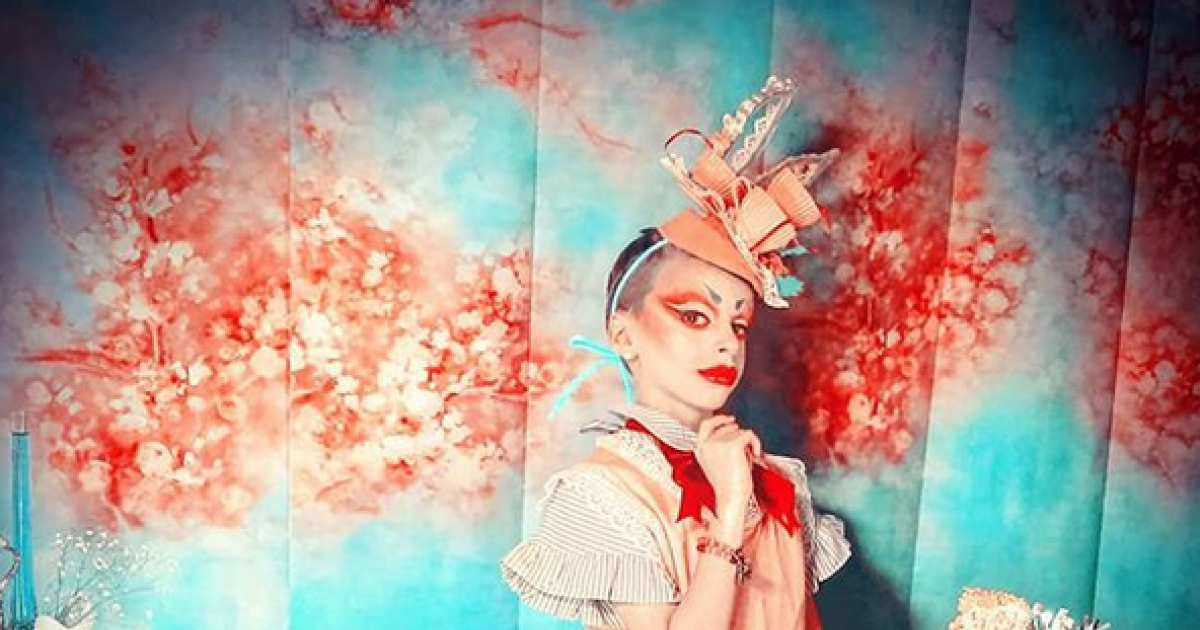 Drag clubs are nothing new in New York, but whats new is a drag club for children which is made by Desmond Napoles, 10. Desmond first expressed interest in dressing up at a very young age, getting support and expression of freedom from his parents the young child has made a drag club. 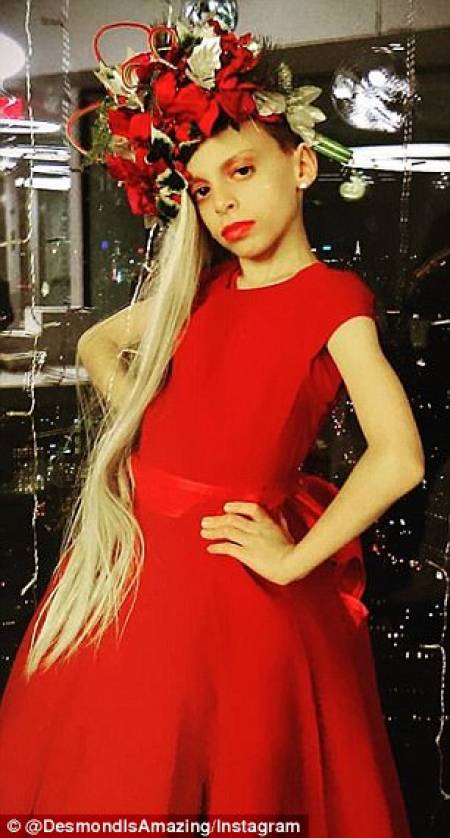 In order to encourage people to come out of the closet and live their true selves in life, this 10-year old boy is defying all the odds and teaching some very valuable lessons of life. Hailing from New York Desmond is better known by his drag name "Desmond Is Amazing."

Be Who You Are

Believing that there are more kids like him out there, Desmond wanted them to feel comfortable in their own skin. In an effort to do so, he has made a drag club for kids "Haus Of Amazing," this is first of its own kind where no adults are allowed. 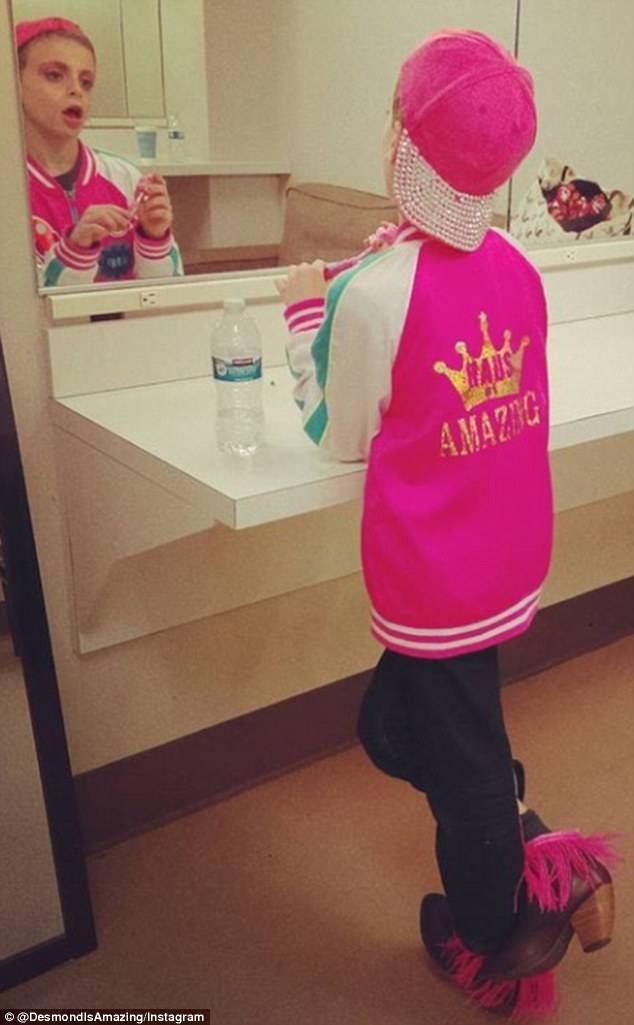 Putting On His Own Mini Fashion Show

Talking about his own journey of true self-discovery, Desmond said that when he was younger he would use his mom's t-shirts, bed sheets, bubble wrap and towels to dress up. He would experiment with these dressing up as fashion icons and walking around the house in his mom's heels. He said, "Ever since day one...ever since I was able to walk, I used to take my mom's towels and take her heels and clomp around the house.[I'd] put the towel on my head, wrap a towel around my body and walk the runway down my house." 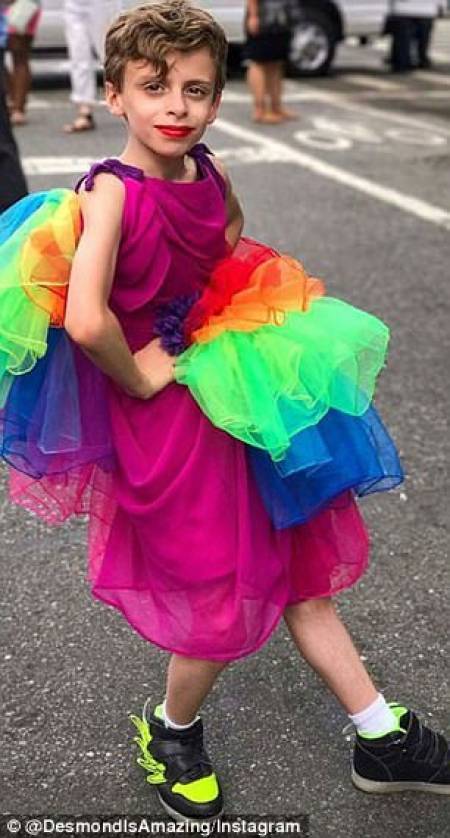 Growing up Desmond had a happy and loving childhood surrounded by dolls, colouring books and toy cars. On his sixth birthday, Desmond received an Elsa costume, enchanted by the beautiful dress, Desmond started to ask his parents for princess costumes for gift. 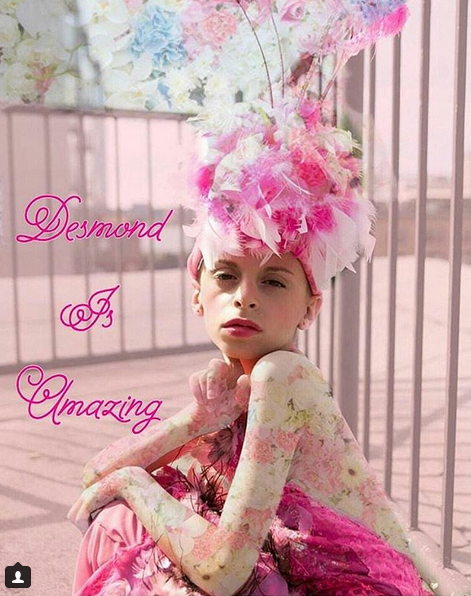 Worried about their son's choice of dressing, Desmond's parents consulted a therapist. The therapist gave the best advice to the parents suggesting them to do nothing and let their son develop naturally, exploring his own tastes and true self in this journey. 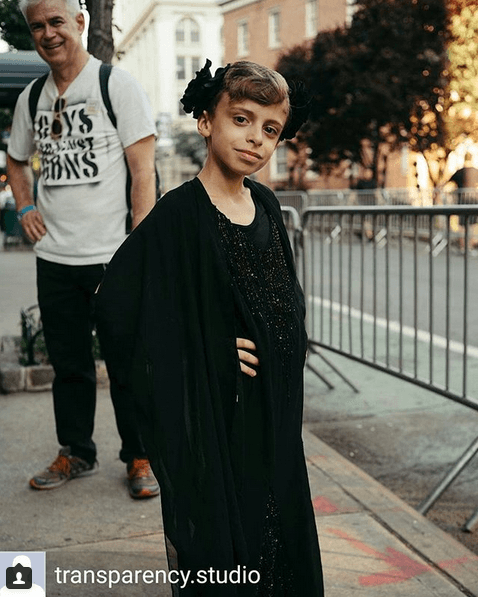 Getting Famous For His Rainbow Tutu And Sparkly Gold Beret

Desmond's real-life dream came true when he got a chance to play a drag role in a music video featuring his hero RuPaul and B-52 lead singer Fred Schneider. Understanding the importance of being true to one's self, Desmond recognized his own passion. 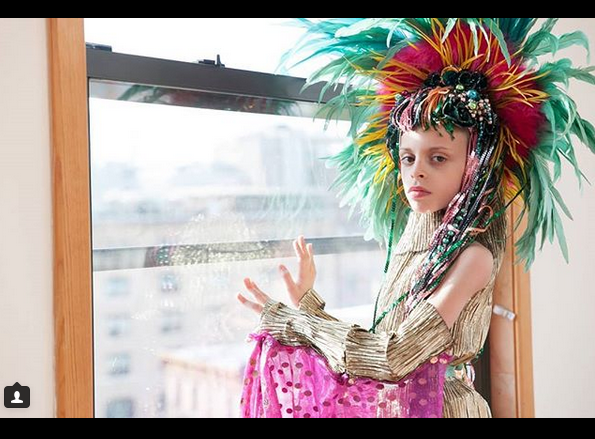 Desmond first gained recognisance when he participated in the Gay Pride festival in New York wearing a rainbow tutu and sparkly gold beret. Desmond instantly got fame for his unique sense of clothing.

Desmond had a Facebook page with a name "Desmond Is Amazing" by his friends and family. The page described his journey of drag artist. Later Desmond decided to use the same name as his stage name. Desmond calls his friends 'Amazies.' 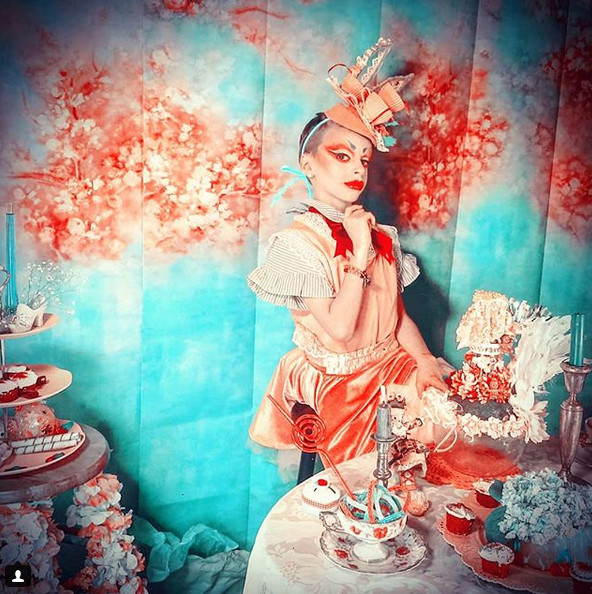 Publicizing the launch of his club "Haus Of Amazing" on Instagram, the post read, "The Haus of Amazing is the first and only drag house exclusively for drag kids who are doing AMAZING drag. Stay tuned while we continue to create this positive, encouraging, and safe online community for all drag kids to connect with one another, share photos, videos." 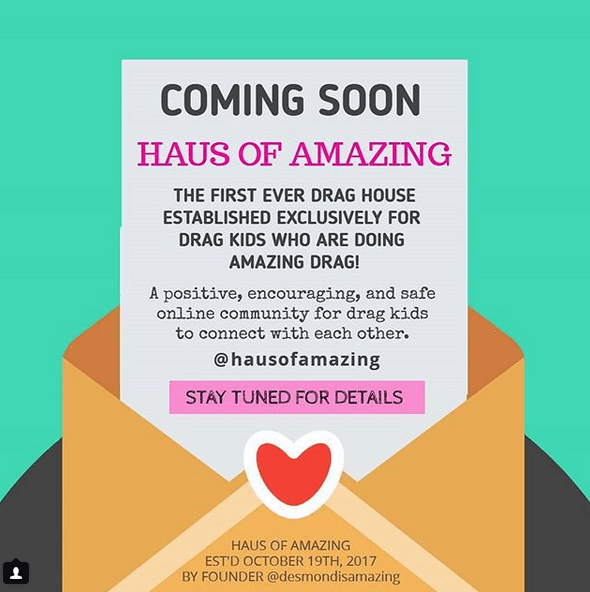 Talking about his inspirations, Desmond named some of his idols whose footsteps he aims to follow in life. The young artist said he is most influenced by the colorful club kids of 1990s NYC nightlife, RuPaul and the queens of RuPaul’s Drag Race, the artists Andy Warhol and Keith Haring, the disco divas of the 1970s, fashion designers Alexander McQueen, Comme des Garçons, Vivienne Westwood, John Galliano, Thierry Mugler, and Betsey Johnson, and the Blitz Kids of 1980s' London. Desmond has a fan following of around 16,000 on his Instagram account. 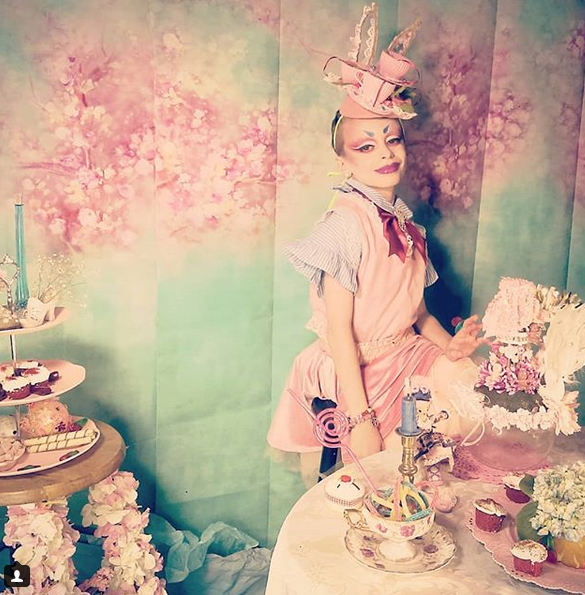 The motto behind Desmond's journey is to help children to embrace their true selves and be happy in their own skin. His page also states, "People should be able to dance, sing, or dress in any way. You can express yourself however you want. It doesn’t matter if you like jazz or rap, ballet or ballroom, dresses or suits. You can just do you. I like Diana Ross. Maybe you do too." 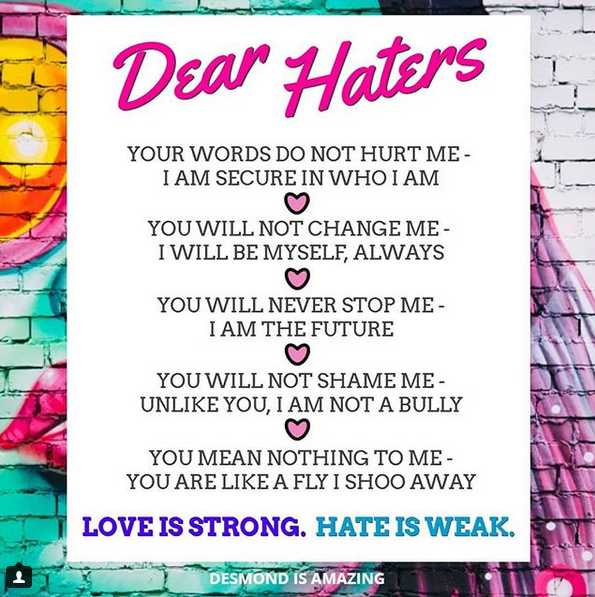 Opening up about her son, Desmond's mom said that their son is not sexually active as he has not reached the age yet. Talking about their son's sexual preferences, they said their son came out of the closet last year. When asked how he knew he is gay, he said, "Well, I started having crushes on boys. So that said, Oh I’m gay because I like other boys. Most boys don’t know if they’re gay until they are 18 or somewhere around that age. And a lot of boys like ladies, but I don’t like ladies. I like boys." 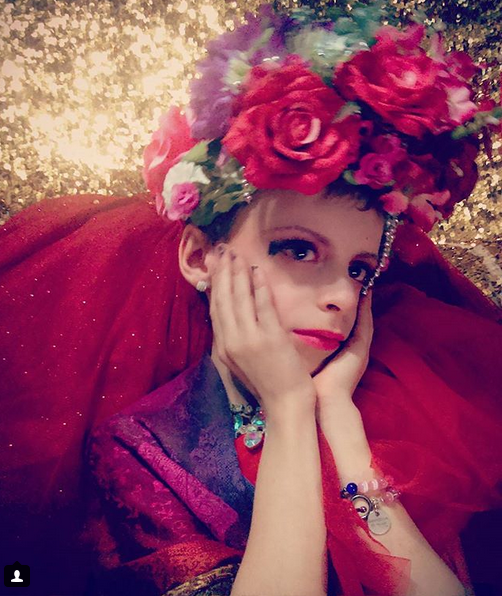 Desmond's mom has acknowledged the fact that her ten-year-old boy is a source of inspiration for thousands of people but at the same time, there are people who are not happy with Desmond's preferences and choices and have made it quite obvious to Desmond's mom in a rather unwelcoming manner. She said, "We get messages from people, like in Columbia, saying: 'We're not allowed to be outwardly [in] drag or gay and it means a lot to see somebody that is.' So there's a positive aspect to it."

Mind Your Own Business, To All The Meanies Out There

Dealing with criticism is never easy for anyone but Desmond and his mom knows how to deal with meanies, she says, "Then there's an uglier aspect where we get a lot of haters and things like that. It comes with a territory and I mostly just leave them alone," she adds. Desmond felt the same and said: "Mind your own business. If you don't like it, don't look at it."