This world is very dark and creepy, we often forget things like that and assume that everything will be fine, that's when something bad happens just to remind us to never let our guard down. One bad incident can reshape your entire life and determine your future, which is why people need to always be careful and suspicious of everything and everyone. 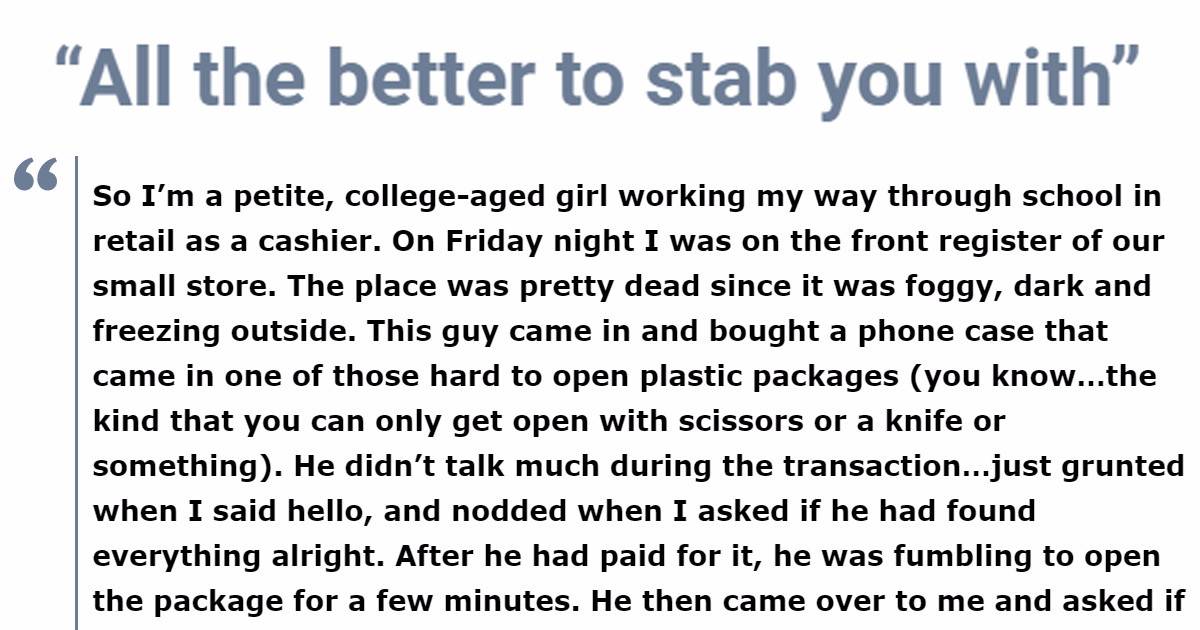 The pervert who broke into our house

This is my mother’s story when I was an infant, my sisters were 3 and 6, and she was still married to my father.

My mother put us to sleep one night and went to bed as usual. My father was passed out drunk next to her. She wakes up a few hours later and gets the feeling she’s being watched and, without making it obvious she’s awake, scans the room. At the foot of the bed there’s a man crouched down on her side. She slowly reaches over under the covers and nudges my father. He doesn’t budge. Her leg is sticking out of the blanket and the man starts touching her feet, then her ankles. She starts pinching my dad as hard as she can. Nothing. The man is moving up her leg, taking his time since, hey, everyone’s asleep. He reaches her knee. pinch He’s running his hand up her thigh. pinch He’s almost to her lady bits and finally, with mighty pinching and persistence, she ‘wakes’ my dad up and he says “What are you doing?”

The creeper gets up and runs. My mom hears the sliding door open. She gets up and checks on us girls, fearing he may have taken one of us. We’re all there, so she shuts and locks the door and checks the front door, then goes back to bed. In the morning she takes a look around the house, inside and out. Nothing has been moved or taken but outside on her bedroom window sill is a tobacco can. That’s harmless right?

It’s full of Vaseline. Apparently this guy frequented my moms window to watch her do what should be private. He never came back, at least not inside.

In winter 2008 I was a seasonal worker at a major book retailer in a large Canadian city on the west coast. For background: Asian woman, about 5’3″, 130 lbs, and was 22 then. Not particularly pretty but possess an approachable resting face and a polite, friendly manner. You are surely shocked that I’m a creep magnet.

Store-opening shift, 9am. I usually worked as a cashier but it was slow so I was sent on the floor to shelve the History section. Ten minutes into my shift, a short and unremarkable man walked up.

“Can you help me find the book that Changeling [the 2008 Angelina Jolie movie about an old-timey kidnapping] is based on?”

I told him that while the movie is based on a real kidnapping case, we do not carry such a book.

“Well, could you recommend some books about other kidnappings?”

I don’t have any recommendations, I said. But I can take you to the True Crime section, and I’m sure you can find something there.

On our way, he asked me a lot of questions about books on kidnappings and serial killers. Strange small talk, but my read was that he was a socially awkward crime buff – the kind of person who thinks someone paid to give you good customer service is someone who will be nice to you and share your interests in any other circumstance.

I left him in True Crime, returned to History. At some point, the guy came back to where I was shelving. He showed me some books he wanted to buy – a small, gruesome stack on kidnappings, serial killers, school shootings. Then he said, “My name is Travis.” He stared at my name tag and said, “Nice to meet you, SleepyBee. SleepyBee. SleepyBee. Now I’ll remember your name.” Hairs on my neck on end, I excused myself and went back to work, cursing name tags. He disappeared. 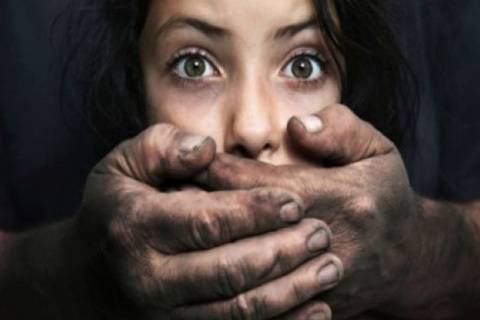 I moved around the whole store a lot throughout the day, shelving different sections and filling in at cash. No sight of Travis over the rest of my eight-hour shift. I assumed he’d left not long after he picked out his books.

At 5:30pm, I clocked out and left the store through the front door. The second I went out the door, I felt someone fall into step with me. “Hi SleepyBee! It’s Travis, remember me?”

Chilled blood. “I didn’t want to bother you while you were working, SleepyBee, so I waited until you finished your shift! Are you going home? I can walk you.” He’d researched many kidnappings and serial killers while he waited for me, he said. Heart hammered. Oh, I said, I have to go to the bank. Stop saying my name, I thought.

The bank was next door to the bookstore. I hoped that there were other people inside, that he might leave if others were around. But no: he followed me inside. The bank had closed so no one was there. “You could use the ATM,” Travis suggested helpfully. Uh, I said, right. He waited for me while I withdrew ten dollars. He held the door open for me as we left the bank. It was already dark outside.

“Do you know who my favourite serial killer is?”

Oh, oh, I said, I forgot something at work, I have to go back right away. I took off, leaving him on the sidewalk and ran inside the store. Found the store manager and the regional manager in the office, gasped out that someone obsessed with famous kidnappings stalked me over my whole shift and tried to follow me home. They asked me call my boyfriend to pick me up, and to go by the register while they sent the plainclothes security guard over to wait with me. Act like the security guard is your friend, they said, so if Travis comes back, he won’t know you said anything and we can grab him; we’ll notify the staff to keep an eye out.

The security guard was bristling for action and trying to play it cool. My boyfriend came and we went home. Travis never returned.

“All the better to stab you with”

So I’m a petite, college-aged girl working my way through school in retail as a cashier. On Friday night I was on the front register of our small store. The place was pretty dead since it was foggy, dark and freezing outside. This guy came in and bought a phone case that came in one of those hard to open plastic packages (you know…the kind that you can only get open with scissors or a knife or something). He didn’t talk much during the transaction…just grunted when I said hello, and nodded when I asked if he had found everything alright. After he had paid for it, he was fumbling to open the package for a few minutes. He then came over to me and asked if he could borrow our scissors to cut the package open.

I said “Sure, no problem”, and as I handed him the scissors, he leaned close to me, his hand sliding over mine as he took them. He looked me dead in the eye and said in a quiet, steady voice “All the better to stab you with” before smoothly walking out and stealing my fucking scissors.

I made sure to double-check the back seat of my car when I got off work that night.

They broke down our front door.

This whole event happened when I was 9 years old. My parents went out for the night and they left me with my 2 older brothers and a couple of their friends. My oldest brother was probably 17 or 18 at the time. My other brother had to be about 11 almost 12. So all together, it was my 2 brothers, 2 of my oldest brothers friends, and me.

It was around 7:30 or 8:00 at night. I had been playing in my room. Out of nowhere, I heard a lot of banging and yelling. This freaked me out and I wasn’t sure what to do, so I of course left my room to investigate. There were 2 men in my living room yelling and flipping out. I quickly went back to my room and shut off the lights and hid under a bunch of toys in my closet.

After about 5 minutes of hiding, someone came into my room. I had a sheet over my closet at the time, so I could kind of see out of it. It was one of the men. He took a quick look around and left out. After he left out, he locked my other brother into my parents room. There was a lot of yelling still coming from the other man in the living room. I couldn’t hear anything that was being said though.

After awhile I got up and walked down the hallway a bit to see what was going on. My brother and a man were fighting on the floor. At this point I took this opportunity to get my other brother out of my parents room. My brother got the phone and called the cops. Meanwhile, my brother’s friend was fighting with the other man on the floor in the kitchen. About 10 minutes later, the cops showed up.

They arrested both of the men. Now you probably want to know why they broke in. Both of these men were drug dealers. My brothers friend had gotten mixed up in it. He owed them a lot of money, and couldn’t pay it. They somehow found out he was at my house that night and decided to come after him. I have no idea why they chose at that time, but they did. Luckily no one was hurt too badly. 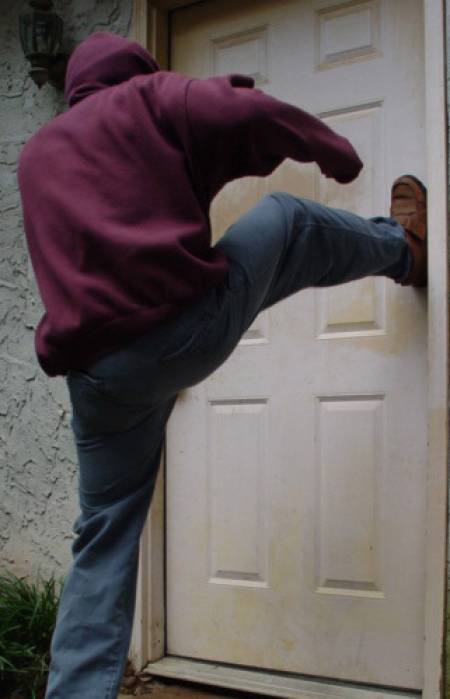