15 Prison Tattoos That Have Hidden Meanings

Posted by in Life Style On 12th June 2021
ADVERTISEMENT

These prison tattoos actually have hidden meanings. Depending on which gangs they've been a part of, how much time they've spent in prison or perhaps even a penchant for gambling, each of these artistic forms of expression have their own symbolic meaning in the system. 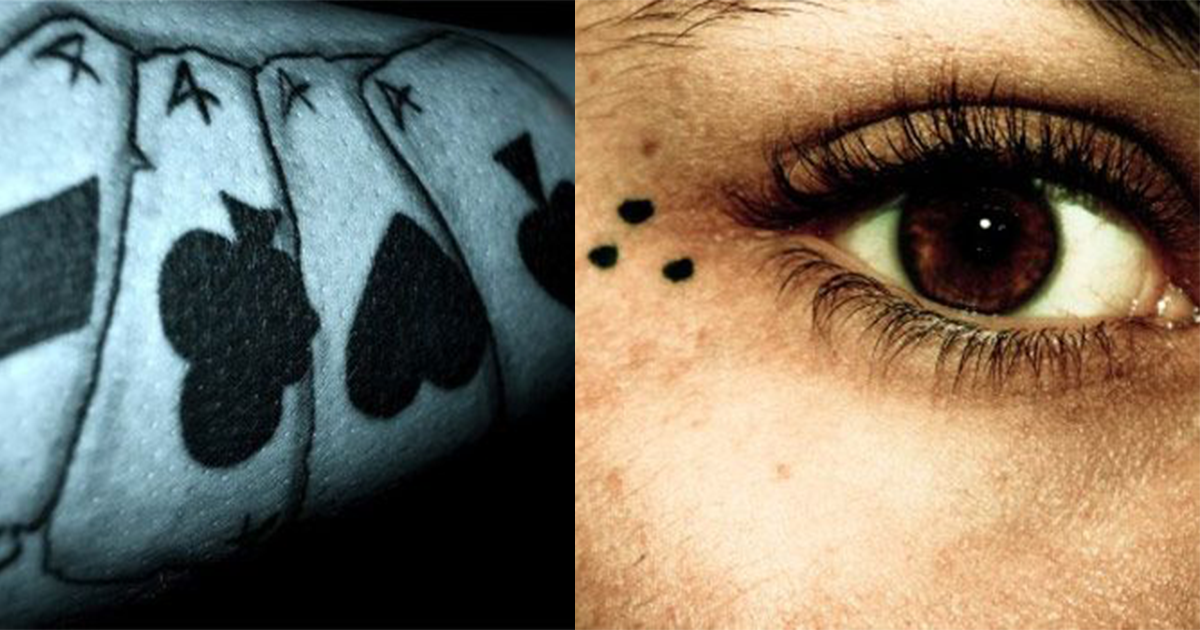 The 5 dots, also known as 'Quincunx', are usually found on the back of the hand or the wrist and signify a convict surrounded by four towers. Popularised in Russian prisons, it signifies the feeling of being trapped and watched.

While Thomas Edison never went to prison, he is known for having one of these tattoos. 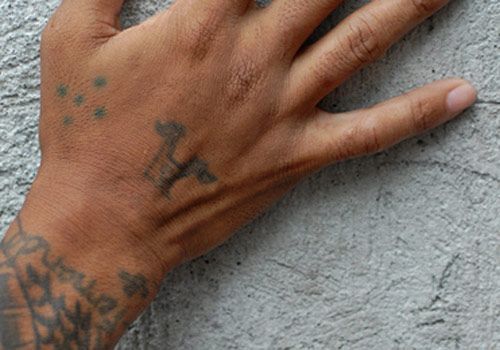 This one is simpler and less symbolic than the above one. The 5 point crown represents the 'Latin Kings' which is the biggest gang in the USA. 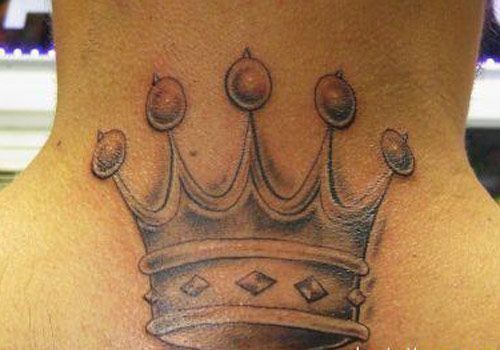 A term that has found itself becoming popular in protest circles recently, ACAB stands for 'All Cops are Bastards'.

It is said to have started with British prisoners. Some reformed convicts however prefer to refer to their tattoos as 'Always Carry a Bible' once they are on the other side of the justice system 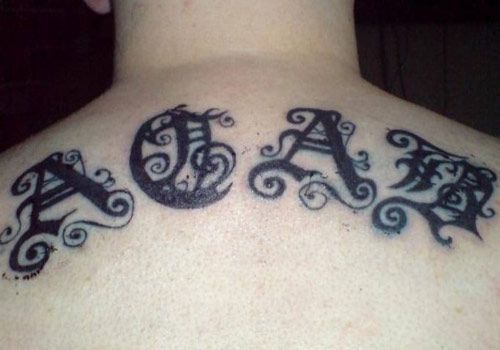 One of the most terrifying prison gangs, AB or 12 represents the Aryan Brotherhood. 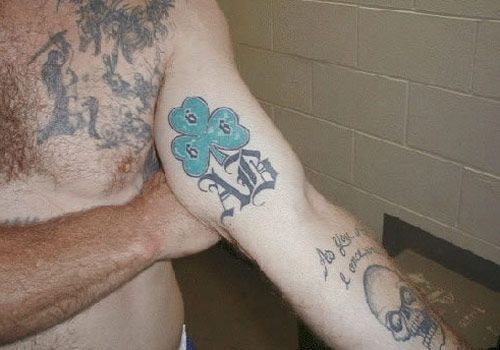 Most commonly spreading out from the elbow, the spiderweb represents spending a long time in prison and being trapped in it like a fly in a web. 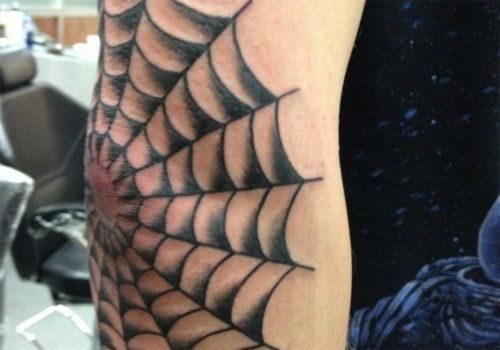 The symbol of the Mexican Mafia, the La Eme, stands for one of the most ruthless US gangs. Working as allies of the Aryan Brotherhood, the two groups work against the Nuestra Familia.

While La Eme is a part of the Mexican mafia, the gang started in Southern California. 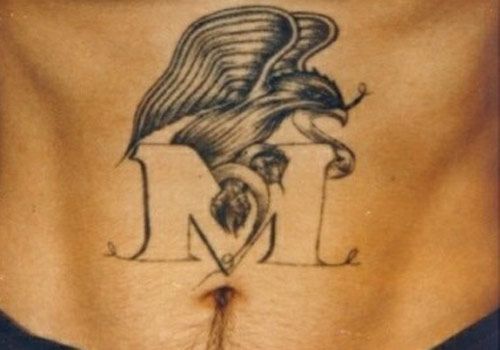 With inspiration taken from a character in a book by Robert Mitchum, this tattoo isn't affiliated with any gang.

Standing for Evil, Wicked, Mean and Nasty simply represents some attitudes of prisoners. Other variations may include Love/Hate, Rock/Roll and Stay/Down tattooed across the knuckles. 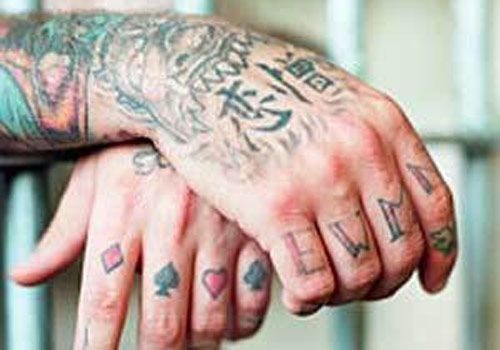 This symbol for the Mara Salvatrucha gang from El Salvador can be found on prisoners usually around their backs or necks. 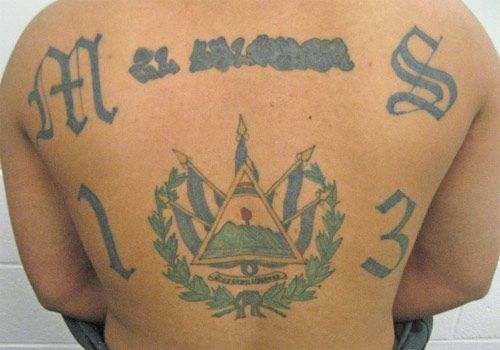 Clock with no Hands

The Clock with no hands is a fairly straightforward tattoo and represents those that have been in the prison system for a long time. Sometimes also shown as a grandfather clock, it can be seen across the wrist or on the arm. 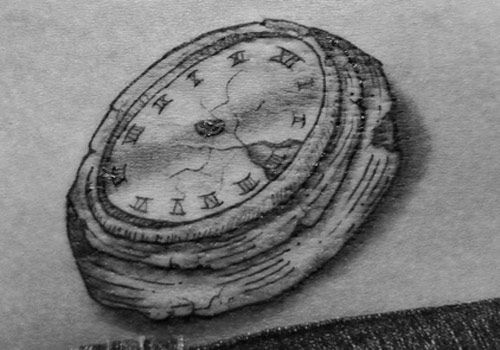 The Norteno tattoo represents the Nuestra Familia which is at odds with the La Eme and the AB.

This gang is also signified by their usual red bandanas. Tattoos may also include a symbolization for the number 14 which stands for the 14th letter in the alphabet, N. 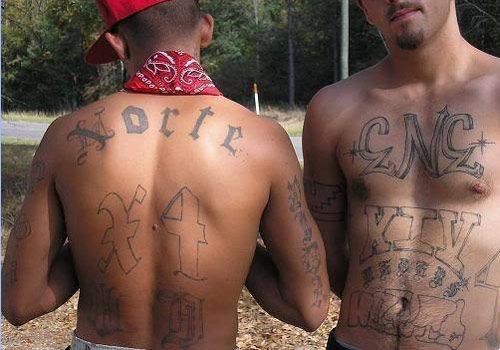 This tattoo represents a prisoner with an affinity for gambling. Initially made popular in Russian prisons, the cards themselves may have deeper meanings.

Spades may refer to thieves, clubs may refer to criminals, diamonds for informants and hearts mean they're looking for a romantic partner.

These tattoos are usually applied against the prisoner's will. 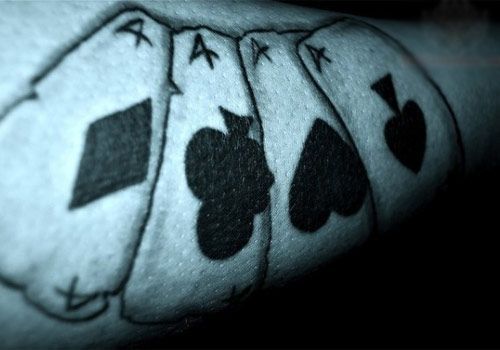 The most commonly known prison tattoo, the teardrop represents 'doing time' in general. 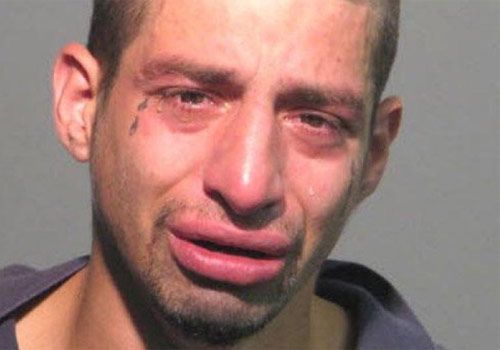 These represent 'My Crazy Life' or 'Mi Vida Loca'. They don't particularly have anything to do with other gangs and just represent the prison lifestyle.

These can usually be seen around the eyes or even on the hands. 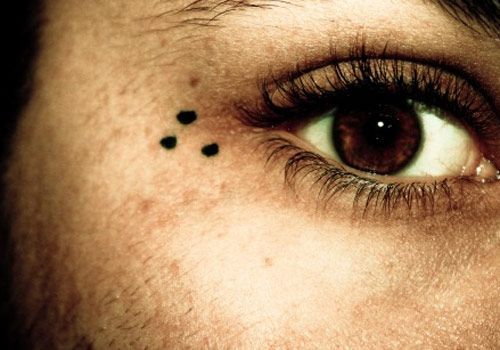