Posted by Sama in Funny On 7th September 2020
ADVERTISEMENT

Parenting is like a ride at an amusement park. During this ride or we say journey we feel all sorts of emotions. Apart from the emotions of love, we can sum up parenting with the emotions of frustrated and overwhelmed too. Now if you say that it is not true, we won't really believe you. It is one heck of a job and every parent out there is trying their best to do the right but it does not really hurt to share a joke or two when it comes to parenting, right?. These parents on twitter are killing the funny parenting tweets game so go through these tweets to give yourself a good laugh. Enjoy! 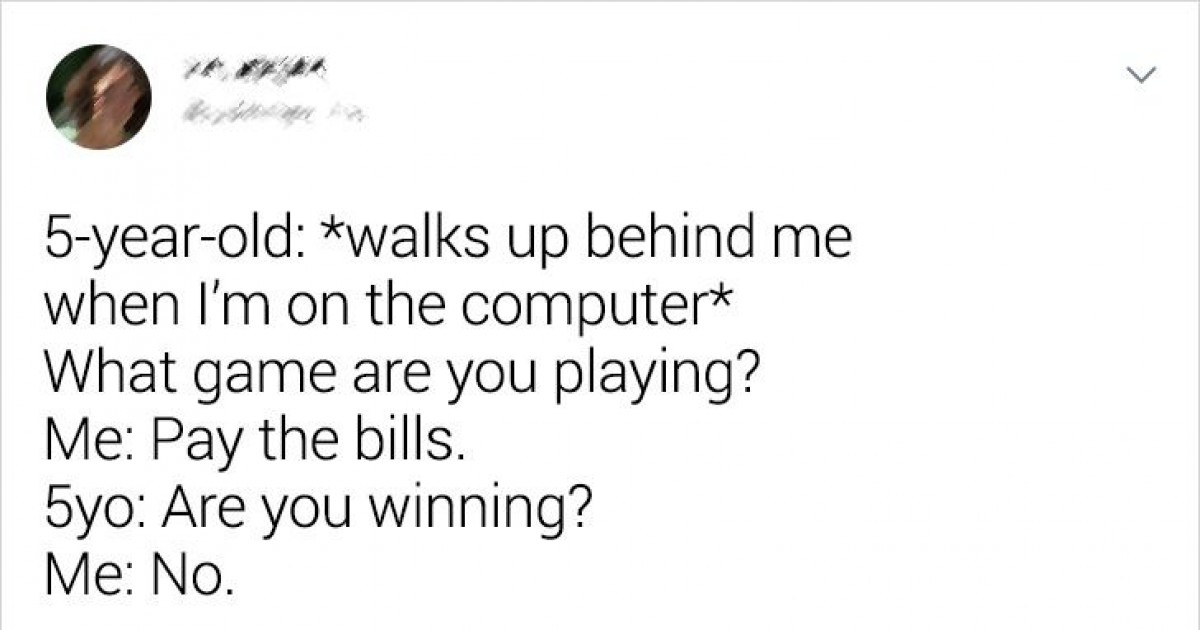 I had to cough but my kids were sleeping so I literally just choked on my own saliva because apparently I choose dying over accidentally waking them up.

My husband and I decided we don't want to have children.

We will be telling them tonight.

My 4 year old son asked me why I was putting on makeup and I said "To make me look pretty." He replied "I don't think it's working."

Audrey (4yo): Daddy! Daddy! Come here!
Me (entering from other room): OK, I’m here. What is it?
Audrey: Can you please leave me alone?

[buying shoes for our kids]
her: which do you like better
me: idk probably our daughter

Me: there’s nothing I wouldn’t do for my child. I would walk through the fires of hell and back for him
Son: can we go to the park?
Me: no, it’s raining a little bit

Me: I’m going to the grocery store...any suggestions?
9yo: [doesn’t look up from kindle]
7yo: I don’t care
Husband: Just get whatever

9yo: Aww, I like the other kind of rice.
7yo: Hey, why didn’t you get waffles?
Husband: *bewildered* You didn’t get granola bars?

This year, I want to be a better mother, but having kids is making that impossible.

Kid: My sandwich has too much peanut butter on it.

Kid: This one has too little.

Me: *makes one just right*

Dinner is a great time for my family to come together to tell each other exactly what is wrong with the meal I made.

*none of them hear*

My 3yo said she wanted to be an astronaut, and I said she had to study hard, go to college, learn a lot of science, and take a physical fitness test, and she shrugged and said, "That's just 4 things." So she's basically a nonchalant motivational speaker.

Me: goodnight monster that eats children who are bad

Wife: [through radio under the bed] GOODNIGHT

If I'm being rigorously honest, the amount of time I spend on the toilet has doubled since having kids.

me *brings toddler his popsicle* What do you say?
toddler: Finally

Husband: [takes the kids and leaves]

Asked to switch seats on the plane because I was sitting next to a crying baby. Apparently, that's not allowed if the baby is yours.

5-year-old: *walks up behind me when I'm on the computer* What game are you playing?

Me: Pay the bills.

[at my funeral]
MY KID: *leans into my coffin and whispers* can i play a game on your phone?