Posted by Sumaiya Ghani in Funny On 13th January 2021
ADVERTISEMENT

Our conversations are incomplete without the use of these oh-so-funny memes. But ever wondered, how these memes would have changed the lives of the people for better or worse. Check out these before and after pictures of our favorite meme heroes and have a little peek into their lives these days. 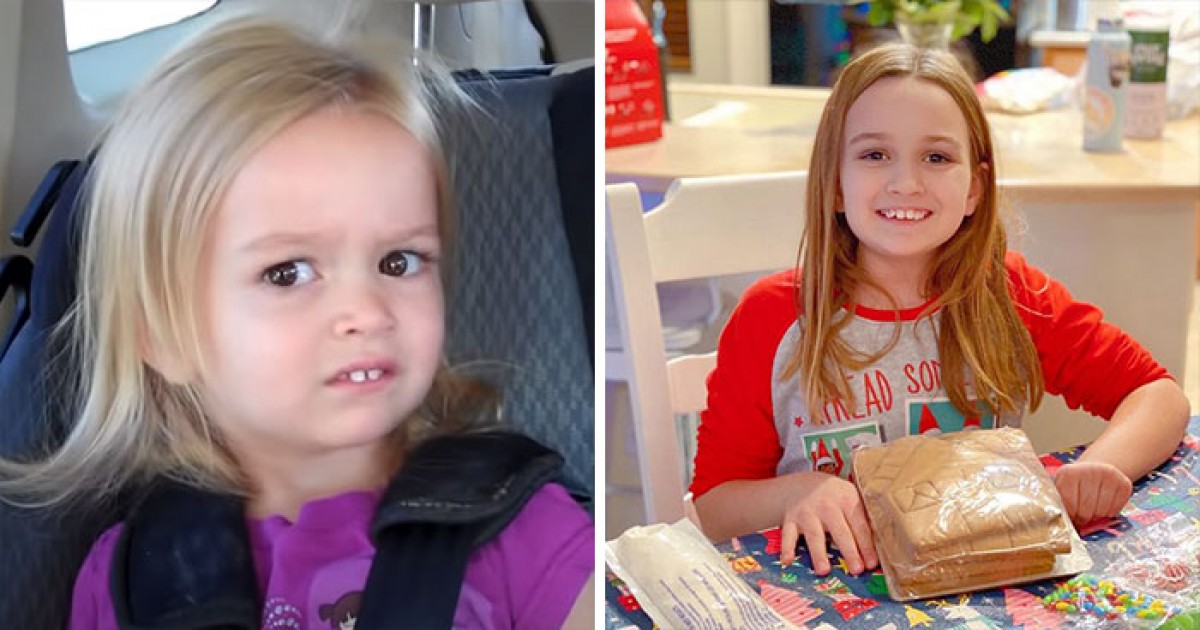 The picture of this baby boy was posted on Flickr in 2007 by his mom Laney Griner who captured the moment when her son was trying to eat sand. It soon became a viral meme with the caption "I Hate Sandcastles," suggesting that the boy had just destroyed another child's sandcastle.

At first, his mom didn't like the context of the meme as she felt it made her son look like a bully as in reality he loved sandcastles. But later when the "Success Kid" meme was created, his mom accepted and loved it.

The meme is the most viral of all the memes and has been featured in various ads, appeared on Hot Topic shirts, Xbox screensavers, and many more. 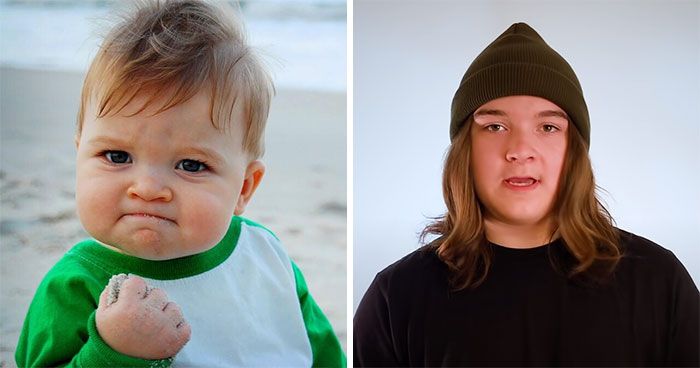 We all know this cat by the name 'Grumpy Cat' but her original name was Tardar Sauce. The picture of this angry cat was posted on Reddit in 2012 and of course, the expressions couldn't be ignored. The cat's grumpy appearance was a result of an underbite and feline dwarfism.

Our favorite Grumpy Cat passed away in May of 2019 at the age of 7. Her official Instagram account has over 2.5 million followers. 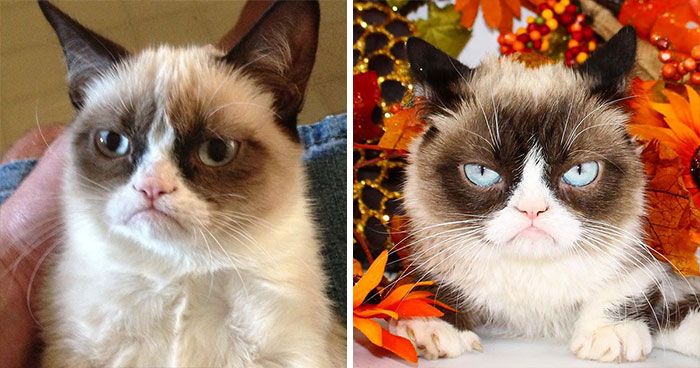 Though this meme got the limelight in 2013, the picture was actually taken in 2010 when the owner uploaded the picture to her blog. The dog is a rescue-adopted Shiba Inu dog Kabosu who got viral for her not so ordinary pose. The photo shows Kabosu sitting on a couch while glaring sideways at the camera with raised eyebrows. Kabosu, 15, is now a celebrity with a big following on her Instagram account. 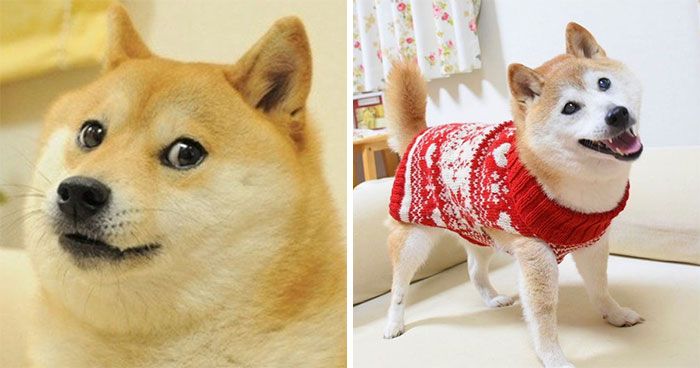 The 'disaster girl' meme dates back to 2004 when Dave Roth, the father of Zoe, captured her observing firefighters controlling the blaze two blocks away from their home in Mebane, North Carolina. The father submitted the picture to a competition run by a photography magazine in November 2007 and won it.

The picture was then published in the magazine and that was the start of it all.

"I'd love for the meme to help me get into or pay for college somehow," Zoe told Refinery 29 a few years ago. "But I ultimately want people to know me for me." 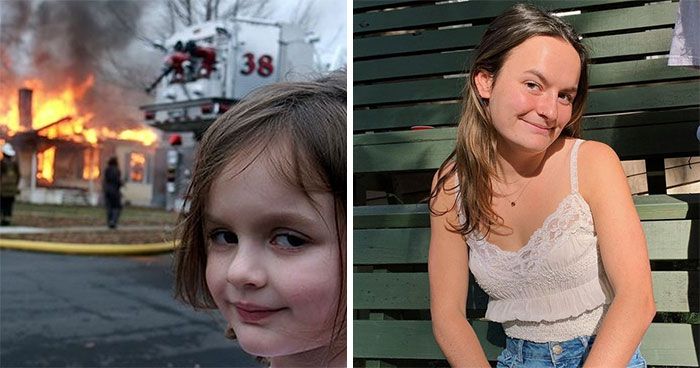 This cute little girl Chloe went viral in 2013 for her funny expressions. The meme came out of a video titled "Lily's Disneyland Surprise… AGAIN" posted by YouTuber KAftC.

The video showed two sisters, Lily and Chloe, reacting to the news of a surprise trip to Disneyland on their way to school. The camera captured the elder sister Lily crying after getting the news while the younger one, Chloe, is seen looking straight into the camera with a disturbed look on her face as if she's not quite sure what's happening.

Chloe is now 10 years old and quite famous with over 580k followers on her Instagram. If you want to peek inside the little girl's life, you can check out her personal Instagram account. 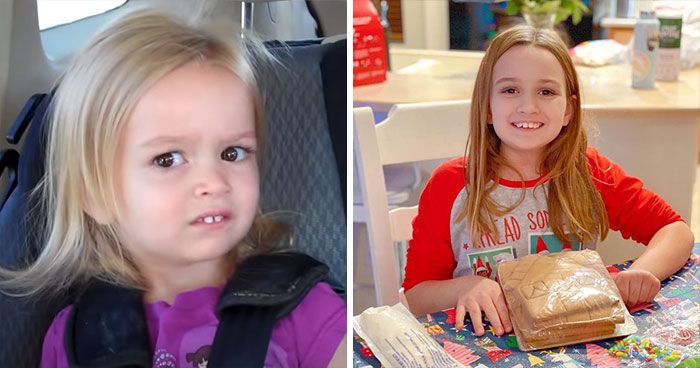 The man in the meme, Drew Scanlon, was a video producer at the popular gaming website called Giant Bomb. The meme "Blinking White Guy" was born in 2013 when Drew was doing a live stream shot. 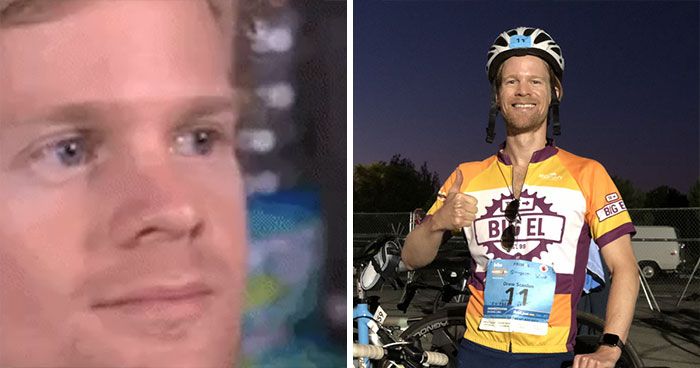 This disturbing meme shows a man trying to hide the pain with a full smile. The man is actually a senior stock photography model, András Arató. His facial expression indicating suppressed pain became a meme in 2011 when the stock photo with DreamTime's watermark was posted on the Facepunch forum.

In one interview, Harold told that this meme was the best thing that ever happened to him and that it opened doors for him. Harold loves it when people remember him from his meme. 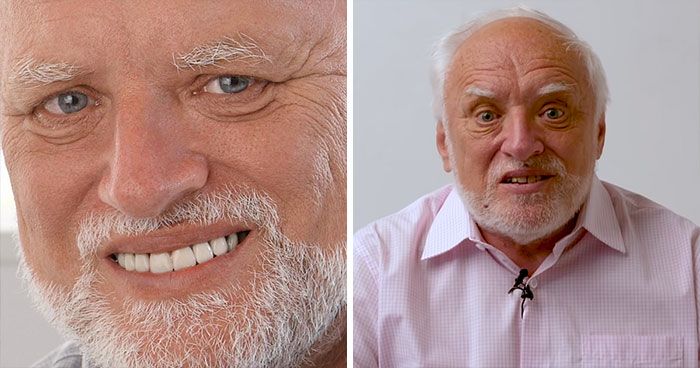 The star of this meme is Kayode Ewumi, who is currently 27 years old. The meme is a screenshot taken from the 2016 BBC Three mini-documentary series "Hood Documentary." In the series, the actor is seen pointing to his head and saying that he finds a woman "beautiful" because "she's got good brains." 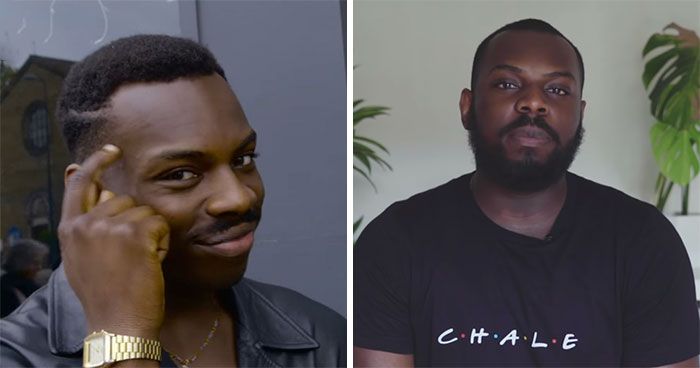 We all have used the Bad Luck Brian meme at least once in our life.

In January of 2012, Ian Davies uploaded a yearbook photo of his friend Kyle Craven to Reddit with the caption “Takes driving test .?.?. gets first DUI.”  Minutes before the picture was taken, Kyle rubbed his face with a sweater to make it red and put on a nasty smile. Kyle got successful as now the meme is used in all the unlucky events. 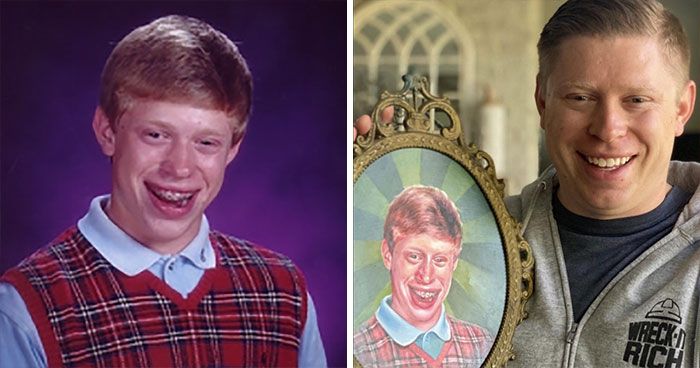 This good-looking dude got famous for being a "Ridiculously Photogenic Guy" for looking perfect even after running miles. Zeddie Smith was running in the 2012 Cooper River Bridge Run when his picture was taken. The picture got famous on Reddit after being taken and posted by computer programmer Will King. 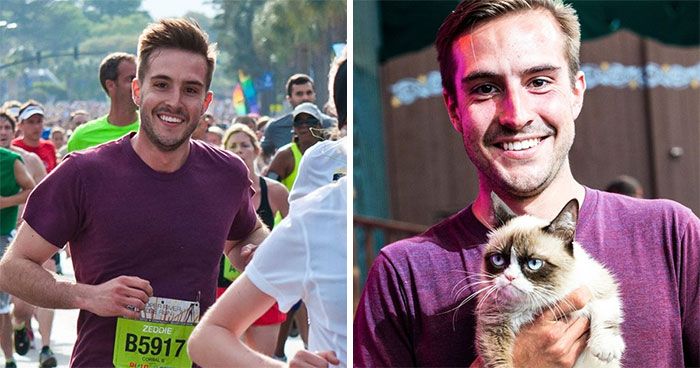 The confused guy in the meme is NBA basketball player Nick Young. The meme is actually a screenshot from a 2014 episode of the YouTube web series "Thru The Lens." In the series, Nick made this face when his mom claimed he was a "clown" in his childhood. 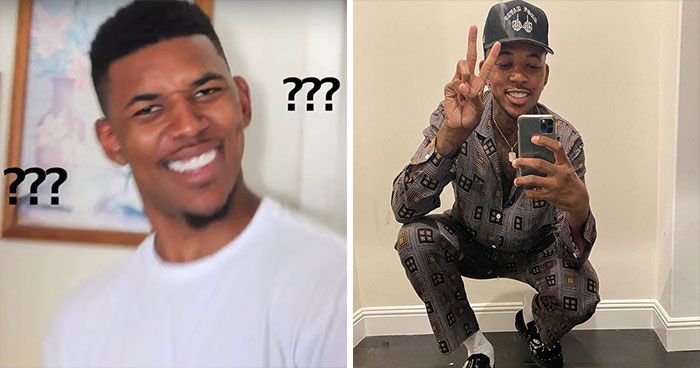 The story behind this meme from 2014 is very funny. The picture was submitted on Reddit by user aaduk_ala who captioned it; "Trying to hold a fart next to a cute girl in class."

The guy, Mike McGee, who looks like he would explode any second, said in an interview to Unilad;

"Well, the guy who took the picture has been a good friend of mine since I first moved out here to Texas, so he knew I was able to make the face anytime I wanted."

"So he wanted to make a funny Twitter caption and told me to make the face. He posted it and like two or three months after he posted it, it took off!" 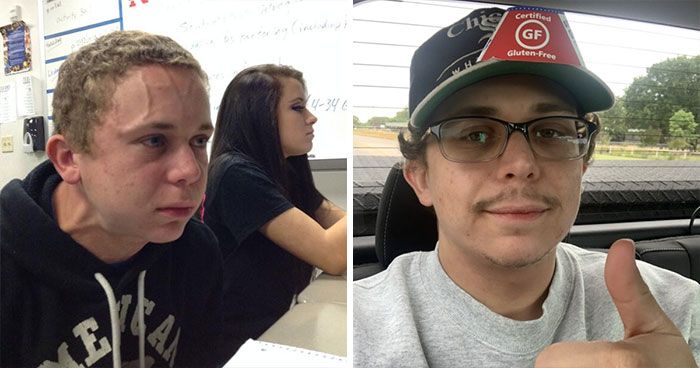 This "First-World Problems" meme sadly sums up our 2020 and is a constant mood these days. But not many people knew that the lady in the meme is actually an award-winning actress from Italy named Silvia Bottini. 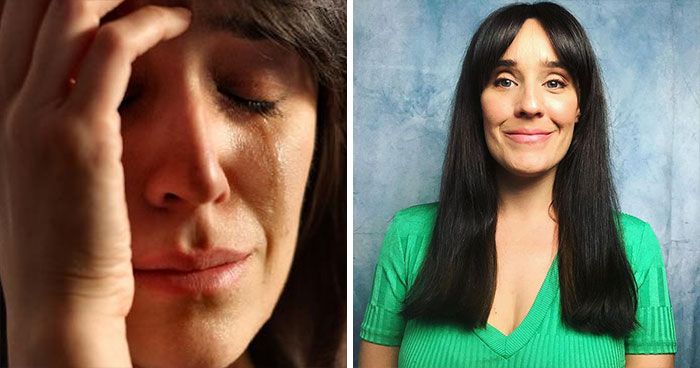 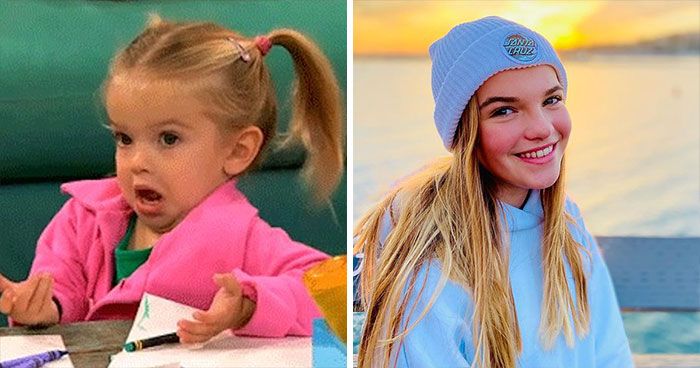 The famous Overly Attached Girlfriend meme started making rounds on the internet in 2012 after a YouTuber named Laina Morris posted a video in which she performs a parody version of Justin Bieber's "Boyfriend" with personalized lyrics that have been perceived as clingy. Laina posted the video after Bieber announced an online sing-off contest to promote his celebrity perfume "Girlfriend."

Things were not easy for Laina after she became part of a viral meme. Since 2012, she dealt with some serious privacy issues, such as strangers finding her personal Facebook page and talking to her friends as well as people trying to access her college records. Laina started feeling anxious and decided to leave YouTube forever in 2019. 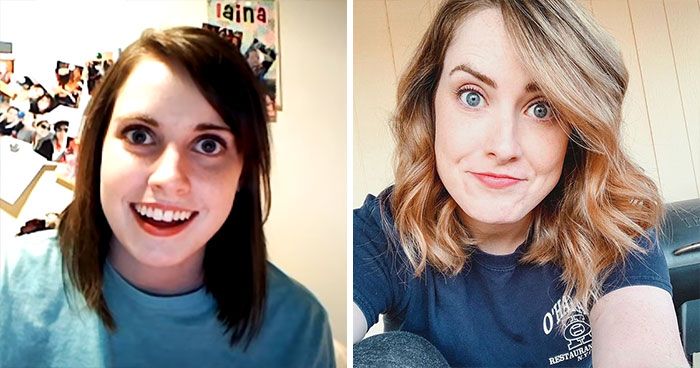 #16 Aliens Are To Blame For Everything (Giorgio Tsoukalos) 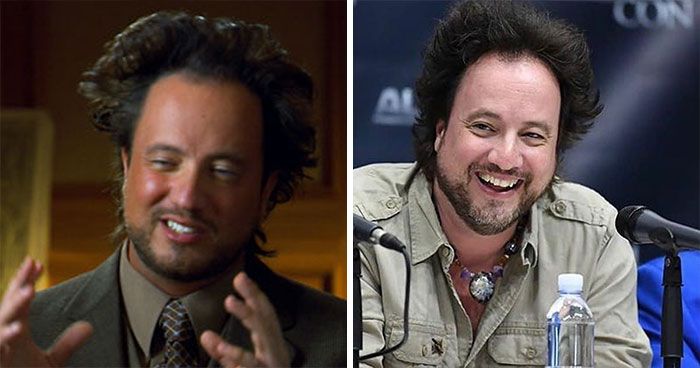 This meme emerged out in September 2013, after the 3rd season premiere of "Key and Peele" aired in the US.

The funny story behind this meme is that this particular episode showed a scene where a character played by Jordan Peele sweats crazily when his girlfriend confronts him about his internet habits. 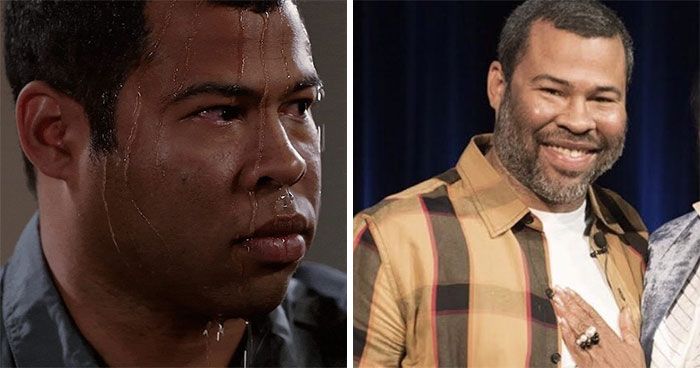 This hilarious meme called "Ermahgerd" (oh my god) started roaming around the internet on March 14th, 2012.

It started off as a post with the caption "Just a book owners smile…" In the meme is Maggie Goldenberger who, at the time, was around 11 years old. The girl told that the picture was created when she was in middle school and she and her friends seriously got into playing dress-up. 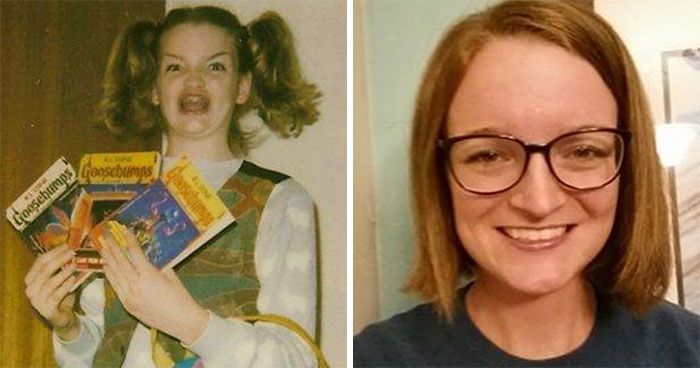 This meme picture was actually the cover of the album "Ma Gangsta" by the rap group Beantown Mafia. The picture got attention after it was posted on Reddit in January 2011.

Blake Boston told in an interview with 'Know Your Meme' that his mom took that picture.

In another interview to RoughDraft TV, Blake said;

"I have no regrets in my life… no matter what I do. I can completely f*ck up on something and I still don't regret it. Because at the end of the day, that makes me who I am, so I wouldn't go back and erase anything if I were to go back in time." 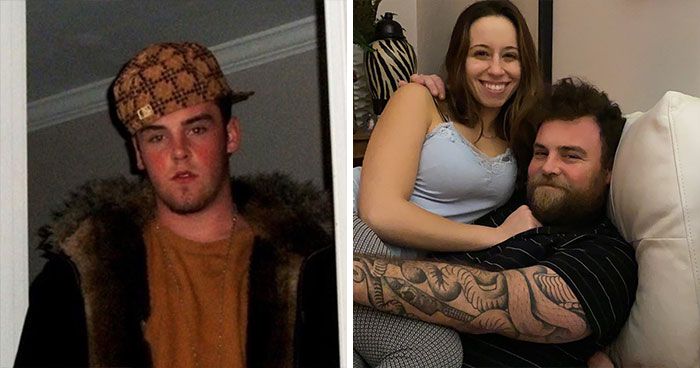 #20 A Schoolboy In A Swamp (Igor Nazarov)

This boy, Igor Nazarov, from Russia, became a part of this meme world in 2016 after he did a photoshoot capturing him in the middle of a swamp behind a desk wearing a suit. Igor actually posed for such a picture to submit it to the most unusual photo contest with the prize of $277. 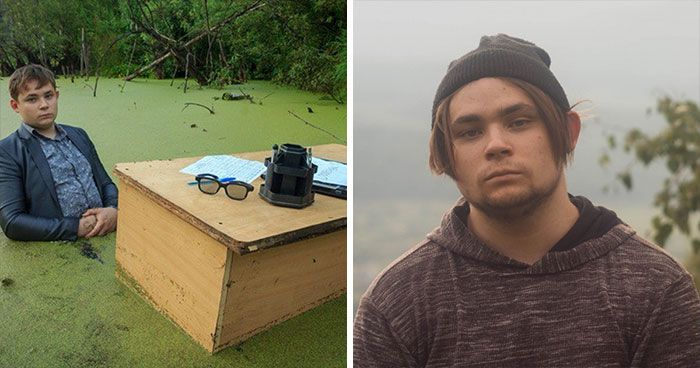 This meme that got the attention by the name "Dramatic Dmitry" is actually taken from the album Paranoia by Russian musician Vladimir Brest. The music came out in April 2011.

In 2013, the musician told Progorodsama;

"I myself am generally positive. However, I want my songs to be attached to these memes. It is also bad that most of the pictures are obscene. All this is seen by children. I don’t want to be a person guilty of degradation and corruption of the young generation." 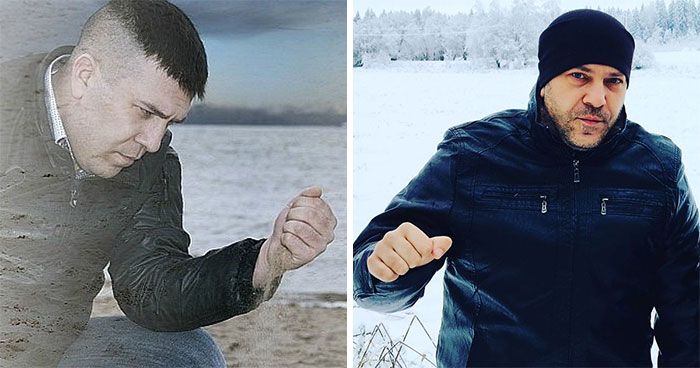 This meme is from 2011, it got viral after being uploaded on a website named Quickmeme with a caption “I got this tattoo for my love of coffee, I got this one because it’s ironic.”

Dustin Mattson, the guy who was the barista, gave an interview to Eater.com where he said;

"I do find it discouraging and disappointing that there was so much exposure brought to an attempt at making a joke of a culinary industry and the professional barista. To me, it's very telling on how we laud farm-to-table food, craft beer, cocktail mixology, but it's ok to have no respect for the specialty coffee world and the people who are committed to it." 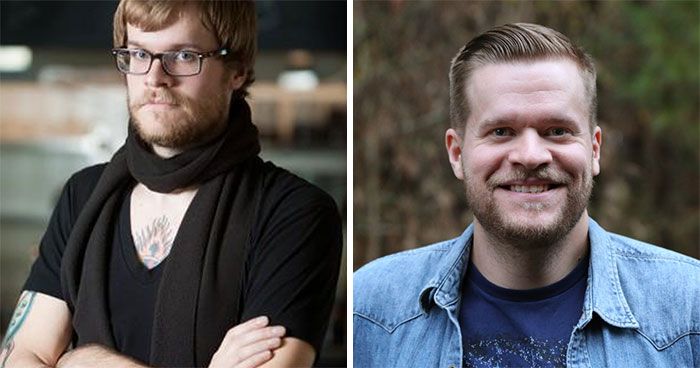