30 Of The Hilariously Bad Pictures That Boyfriends Take

Posted by in Relationships On 18th August 2021
ADVERTISEMENT 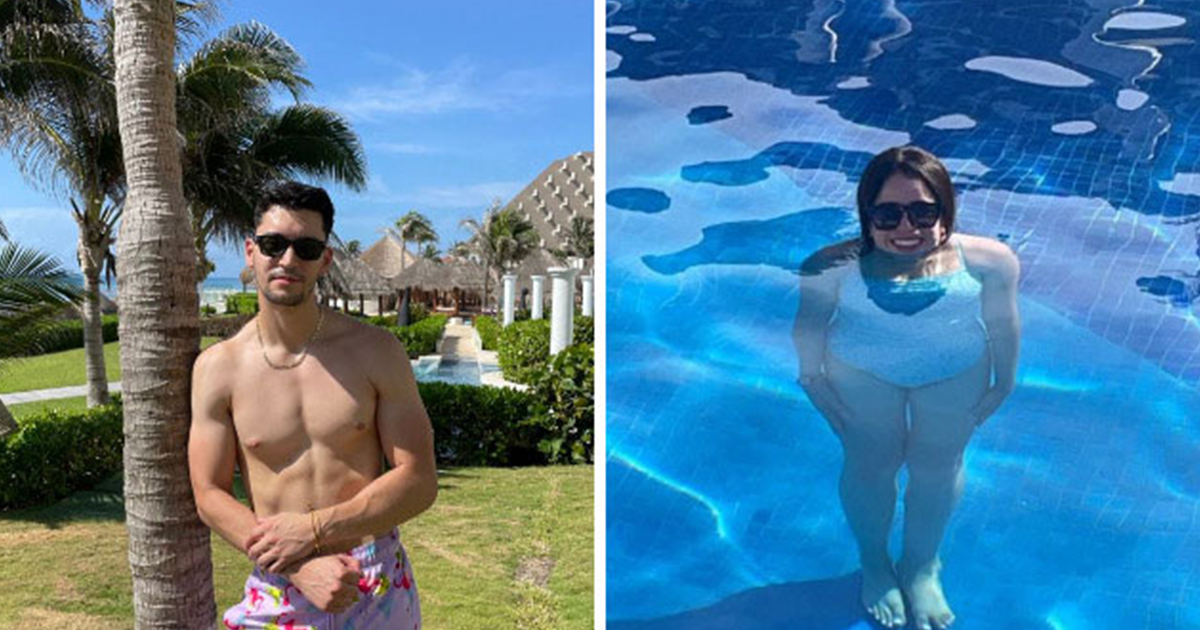 He works at Calvin Klein, she works at Charlie and the Chocolate Factory 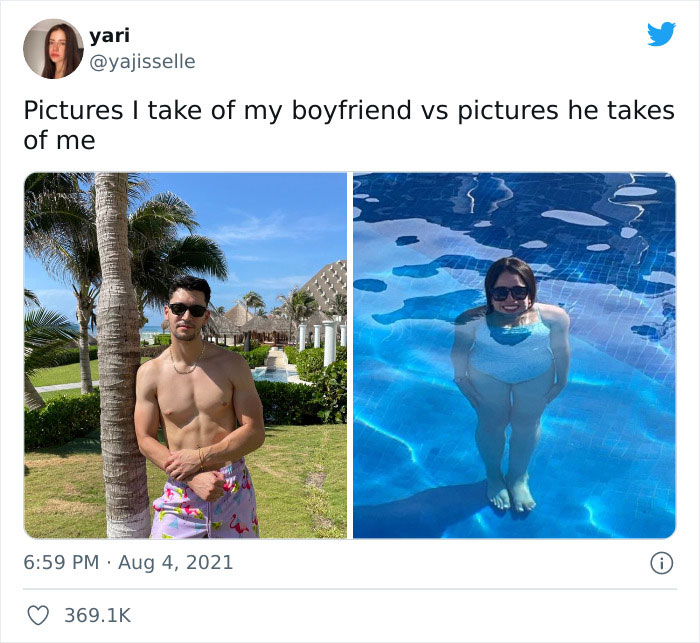 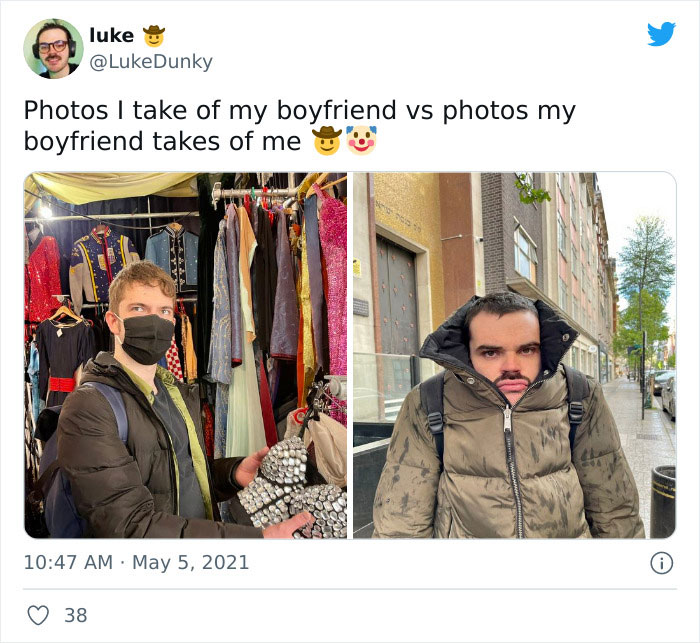 He's a model waiting for his big break, She's a floating head 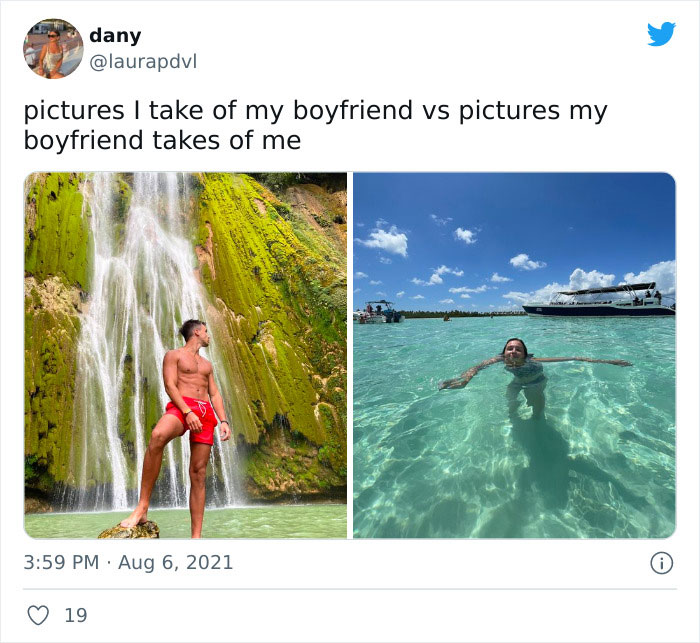 He's a turtle whisperer, She's a...where is she?

He's a man of interesting tastes, She's got none. 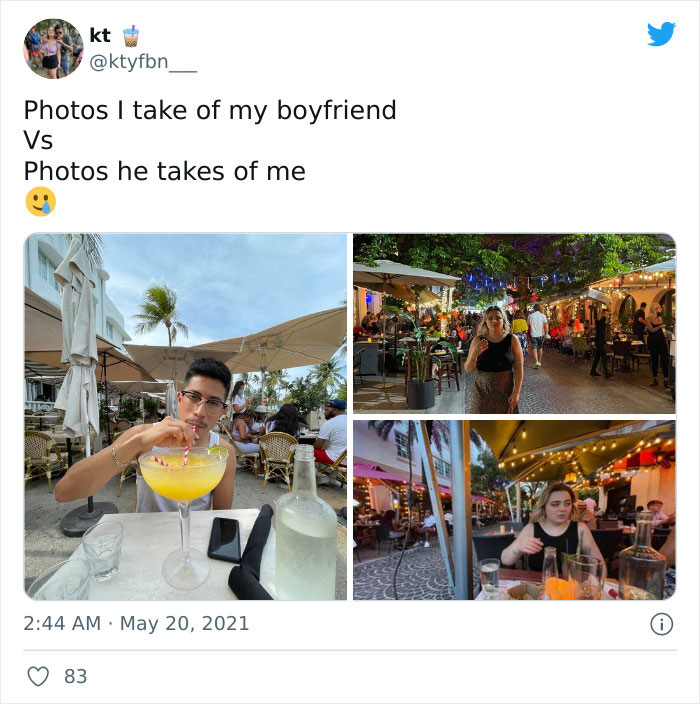 He enjoys a good night out, She's more lights out. 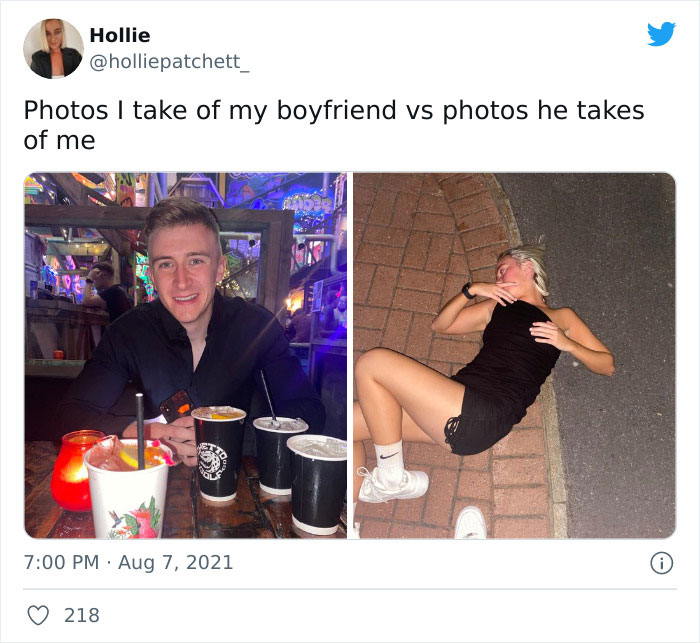 He's ahead of the rest of them, She's not even half a head. 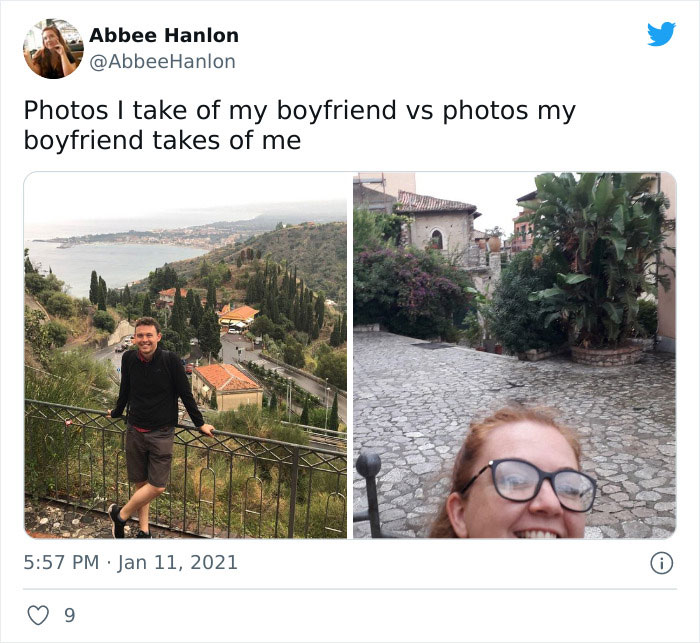 He's basking in that summer glow, His battery is just low. 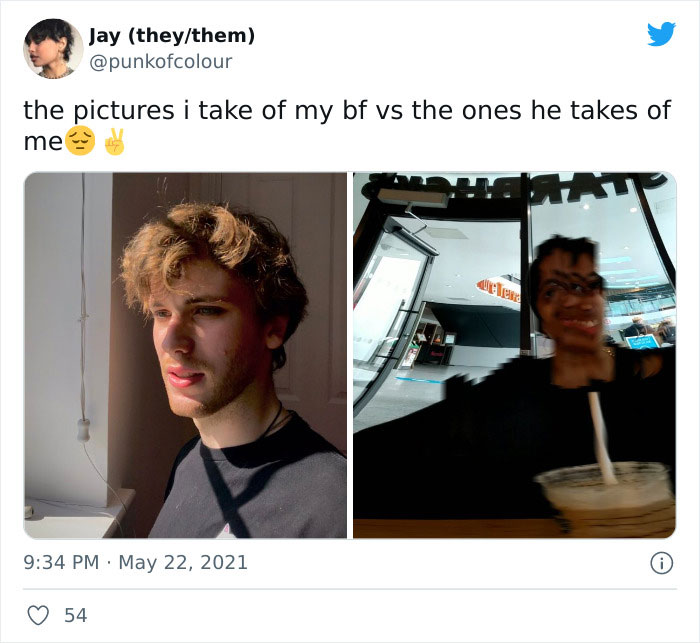 He's the man of the house, He hasn't left the house in 5 days. 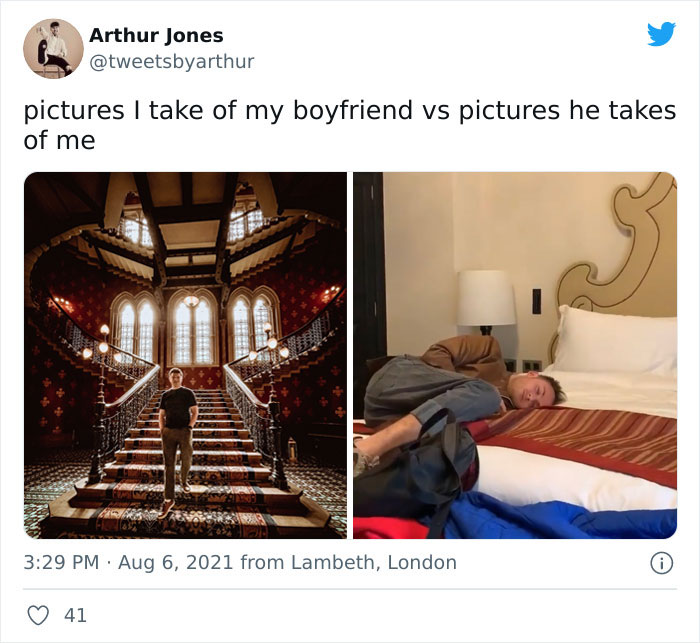 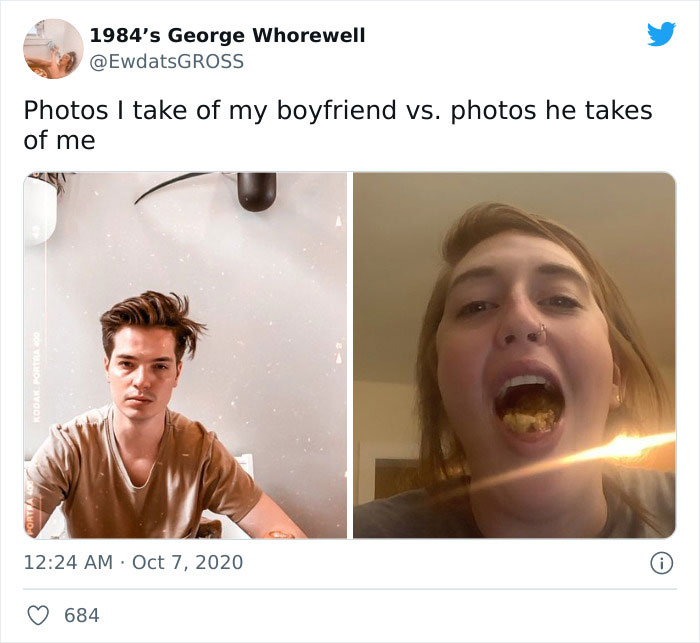 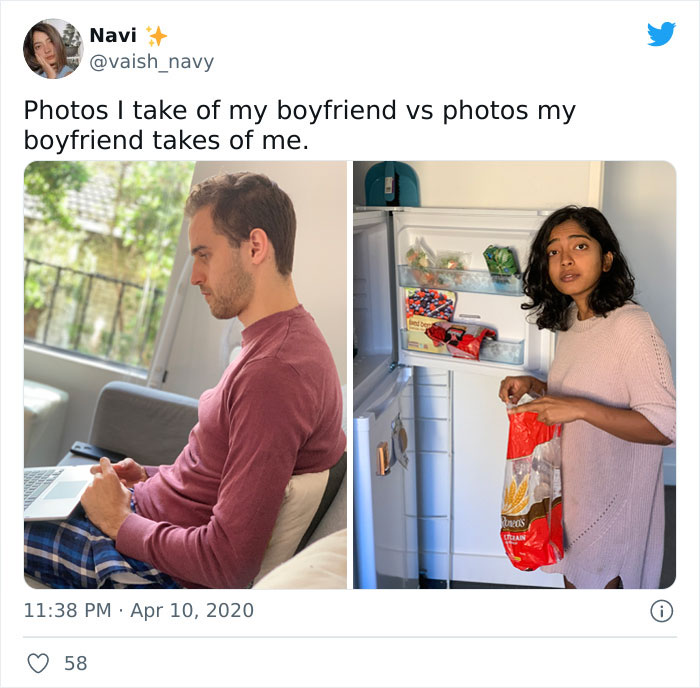 He's a beacon of joy, She's the queen of darkness 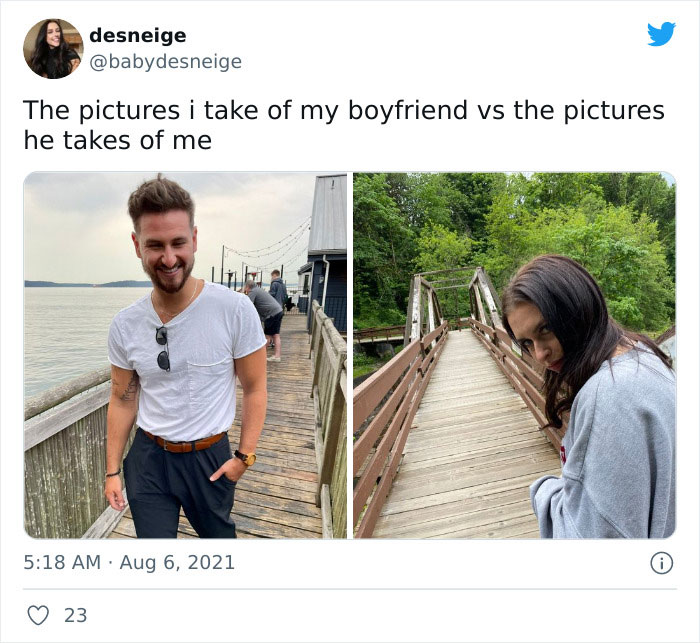 He dresses to impress, she just looks pressed 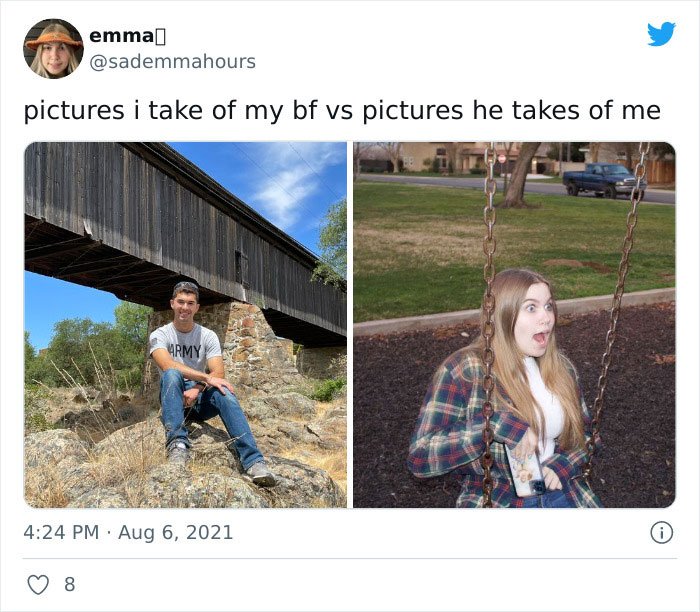 He was a sk8er boi, she said see you later boi 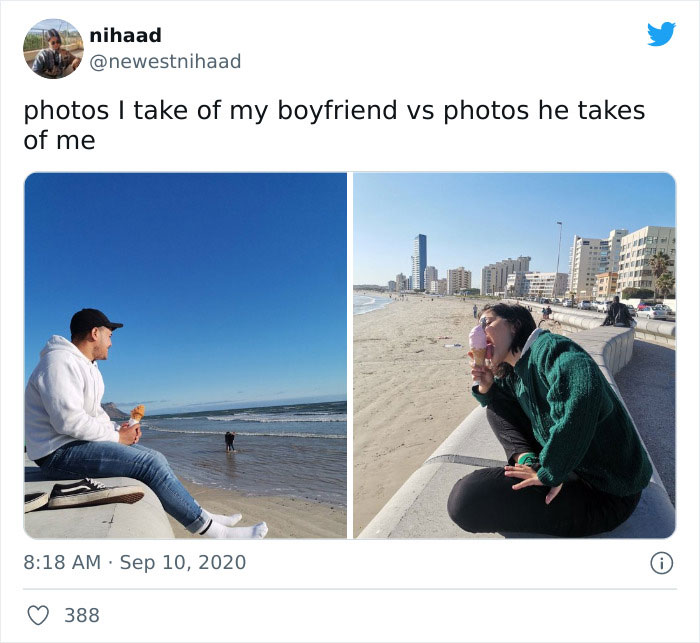 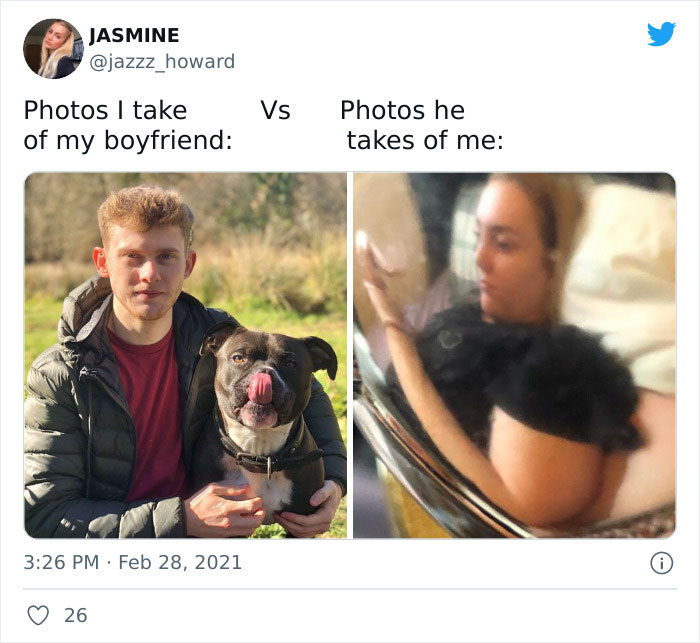 He usually has a great day, She has sh*tty ones.

He enjoys sunny summer days, She enjoys drowning in the water

He likes to smile for pictures, She likes to not even know she's being photographed 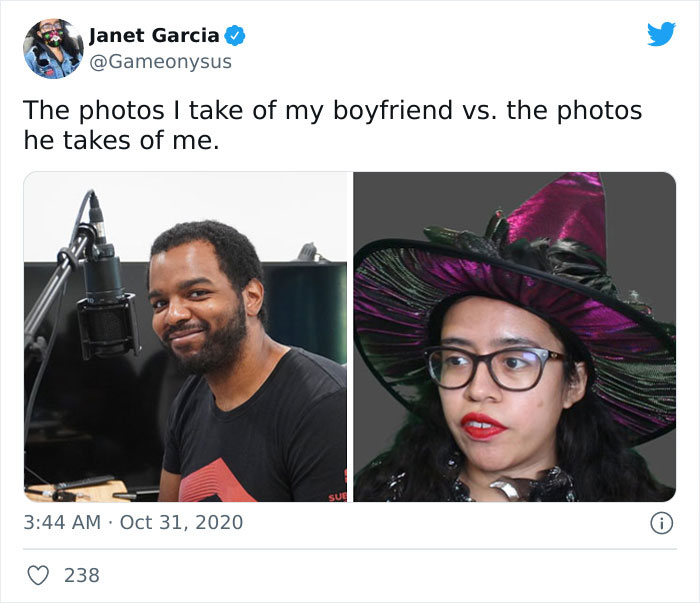 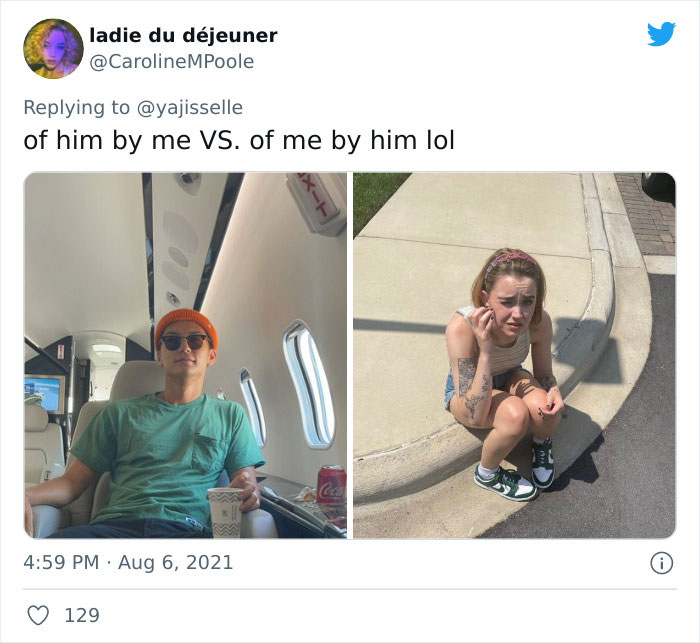 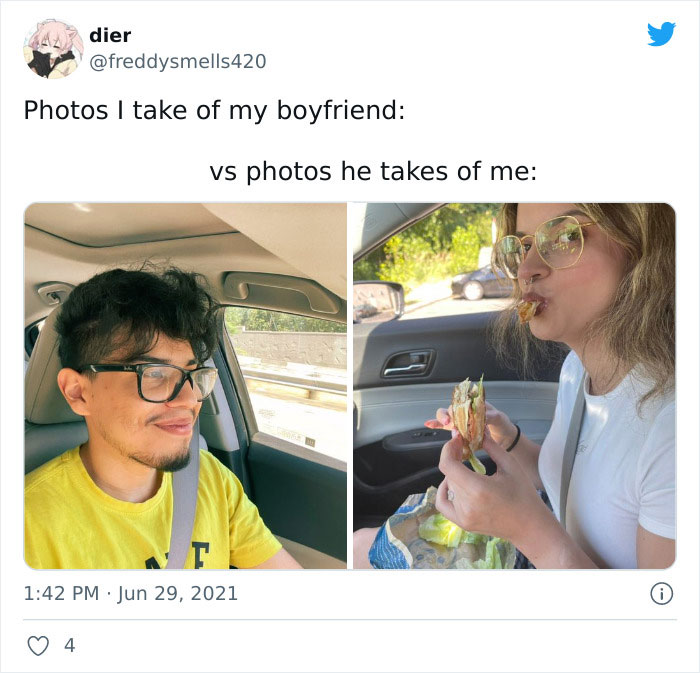 He likes the lighting to be perfect, She likes it when she's not blinded by the sun 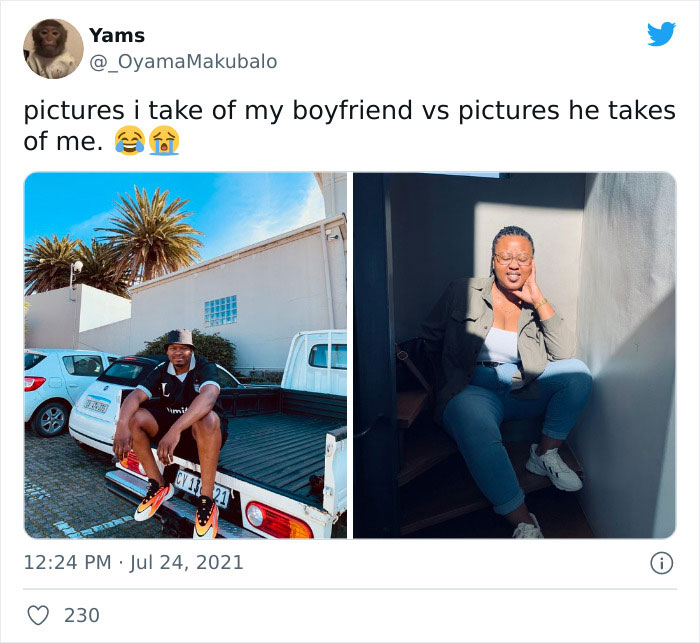 He likes to look artistic, She likes to get her picture taken when she's not taking a massive sandwich bite 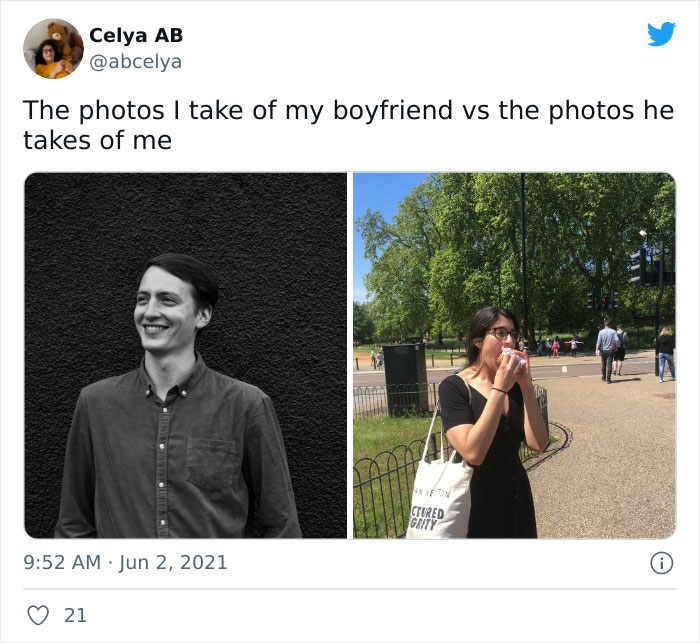 He likes to smile for the camera, She likes to not look like a tiny bald man with perfect eyebrows 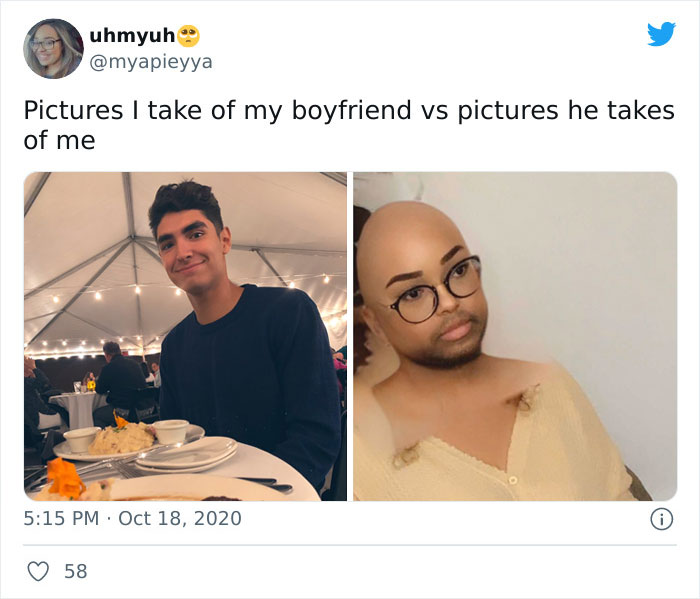 He likes posing in front of majestic waterfalls, She likes to be entirely in the pciture

He likes to see the wonders of art, She likes to be seen, at least a little bit.

He likes a nice drink while simmering in the pool, She likes not to drown in it 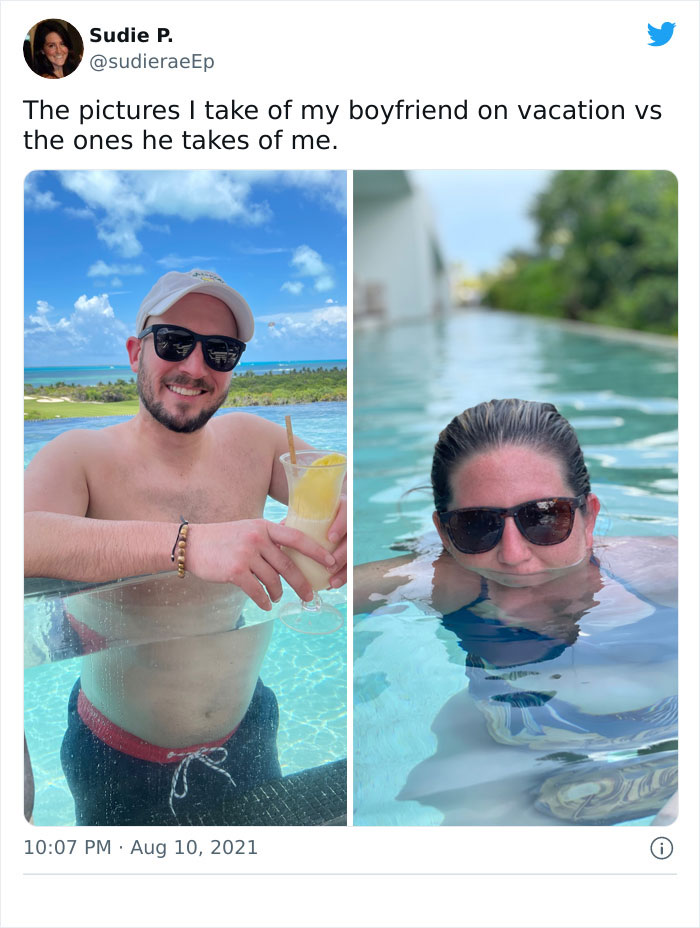 He drinks the things he enjoys, She becomes the food she likes. 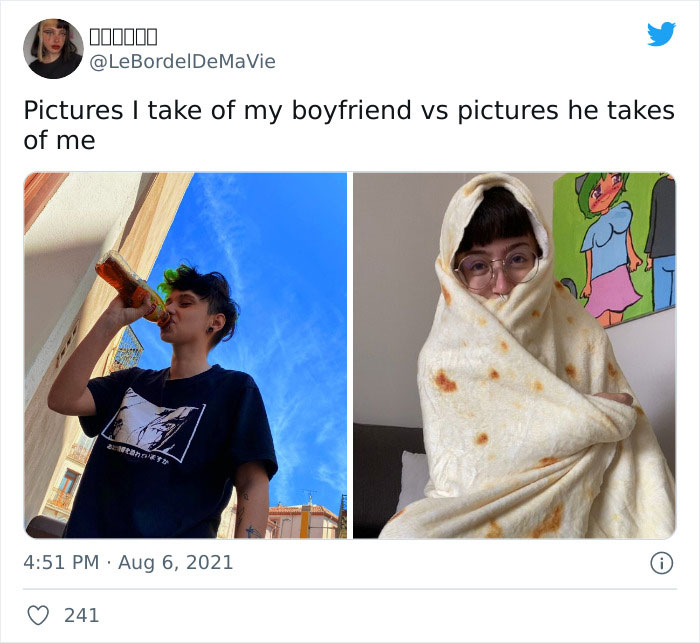 He dresses up for a picture, She would just like to be awake 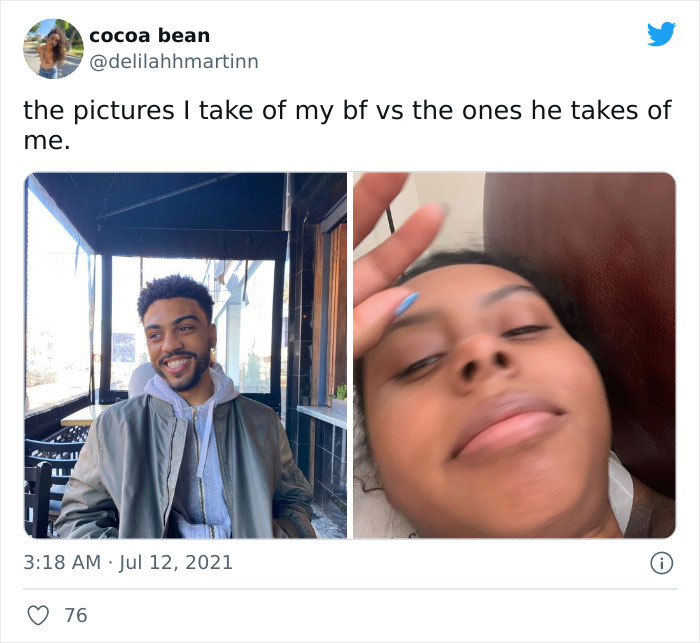 He loves to be her number 1, She'd like to not be second place to cake. 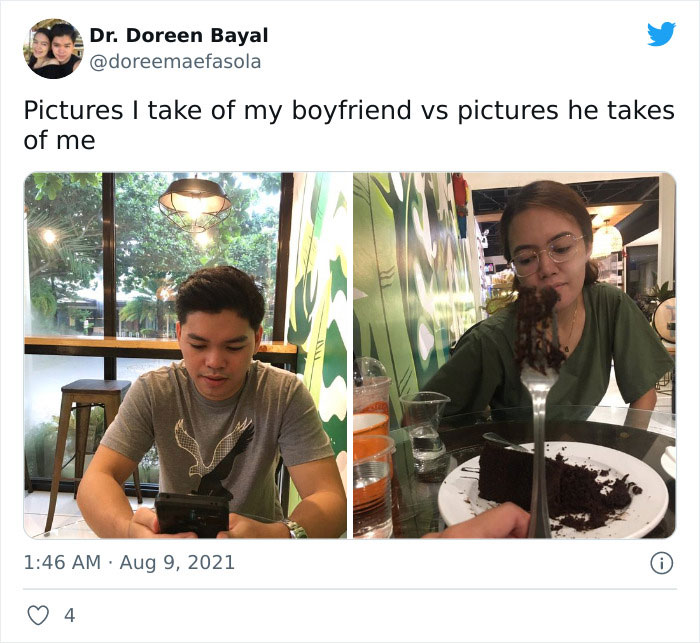 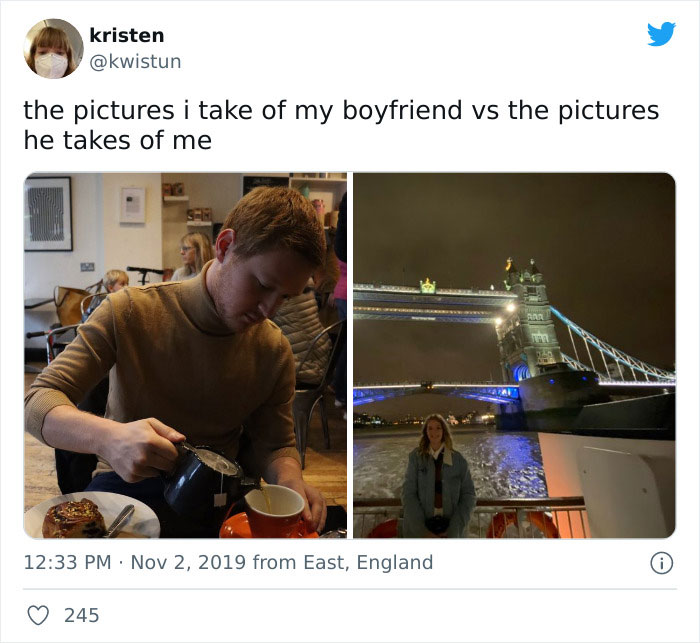