Posted by Zainab Pervez in Parenting On 16th December 2020
ADVERTISEMENT

An Australian blogger mother shares the letter her 8-year-old daughter wrote to the classmate who fat-shamed her. The little girl wrote that she didn't care what other people thought of her. Her mother is being praised for her 'great parenting'. 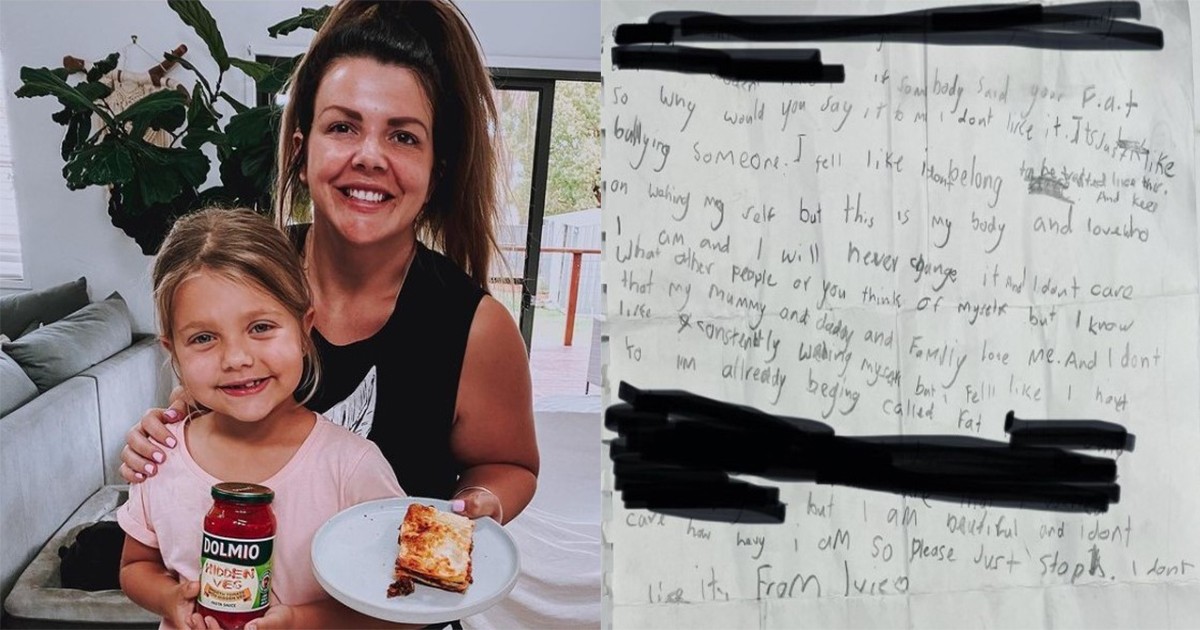 Parenting is a tough job. Taking care of their survival and well-being itself takes it's toll on parents, but to also raise your children as decent humans with a sense of self worth and good morals is the ultimate goal of parenting. As long as kids are small and within our reach we can make sure how kids are doing and responding to tough situations and be there to guide them as well. But when they grow up and go out in the world, interact with new people, make new friends, then we can only trust the foundation we built in their early years and hope for the best. 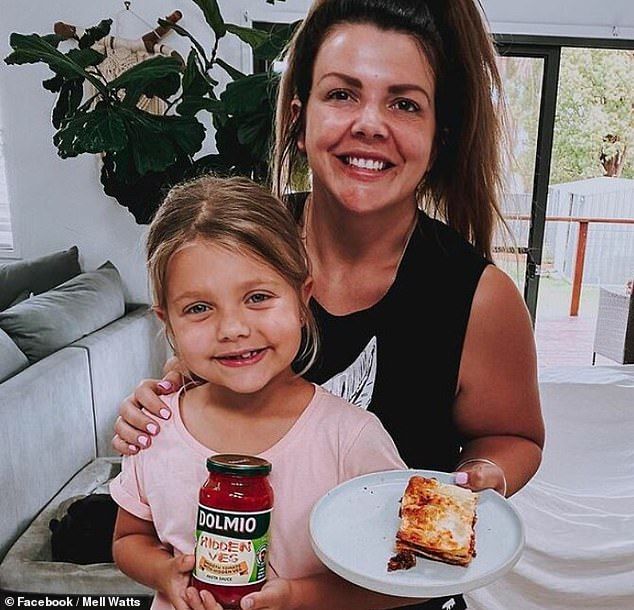 One such parent shares her parenting win with the world. A mom from Australia, Mel Watts shared her 8-year-old daughter Ivie's response to a classmate who bullied her and called her 'fat'.

Ivie, 8-year-old, wrote a letter in response to being fat-shamed

Ivie says in her letter, "If somebody said you're fat so why would you say it to me. I dont like it. It's just like bullying someone". She felt like she doesn't deserve to be treated like this and kept on weighing herself. She says," But this is my body and I love who I am and I will never change it and I don't care what other people or you think of myself but I know that my mummy and daddy and family love me." She doesn't like constantly weighing herself but felt like she has to. She is amazed at already being called 'fat'. She ends the letter with these words," But I am beautiful and I dont care how heavy I am, so please just stop! I don't like it. From Ivie". 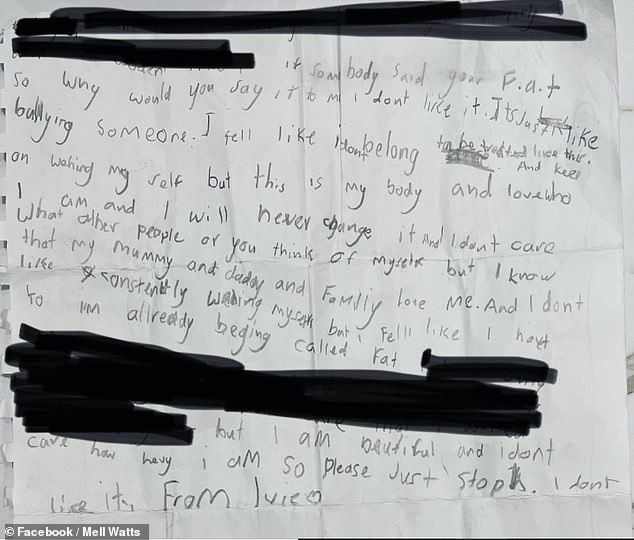 This letter is a very mature response for an 8-year-old. The way she accepts her body and shows love for it with confidence, is something many adults fail to do. This is the kind of body positivity and self acceptance we need in our world now.

Ivie's mother is also proud of the way she dealt with this bullying situation. She even ended the letter with a heart sign.

Mell Watts shared her daughter's letter with the caption, "There are many moments I have worried that my parenting style isn’t working, some of my kids are harder to parent than the next, some are more sensitive and some are much stronger in certain aspects.

I’m not posting this in a bad way, it’s been dealt with correctly.

This letter Ivie wrote to a friend who used an unkind name to describe Ivie, it wasn’t meant in a nasty way, I think it was more of a conversation but the one word stuck with her. It made her feel uncomfortable, stand on scales at home, and question her body shape.

Now the other child involved is a different personality to Ivie, a little stronger, and has a different sense of humor to sensitive Ivie. Both little girls, and both learning their way in the world." 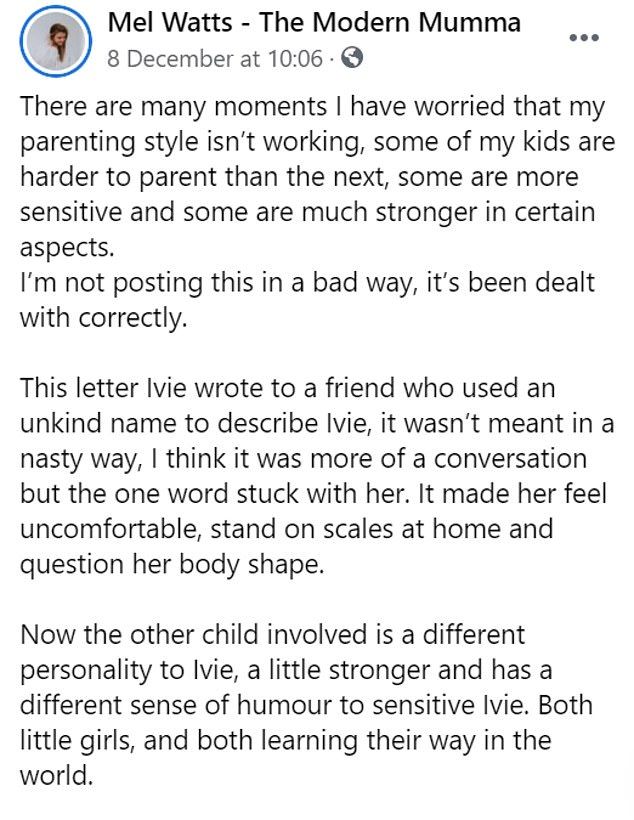 She's proud of her daughter's body positivity and self acceptance

"The way Ivie wrote “but this is my body, and I love who I am. I’ll never change it and I don’t care what you or other people think about myself I know my mummy and dads and family love me”

I’m done. I have mastered parenting and everything else will easy right?

I have always taught my kids to love their bodies, it’s their only body and their only chance to live a Beautiful life. I tell them they need to respect it and their body deserves the respect back.

I’m so proud of Ivie (8) for standing up for her body, and her feelings. I’m also extremely happy that the other girl acknowledged that Ivies feelings were hurt - they were friends again afterwards 💕🧡

She’s still learning to write and I’m so proud how far she’s come this year." 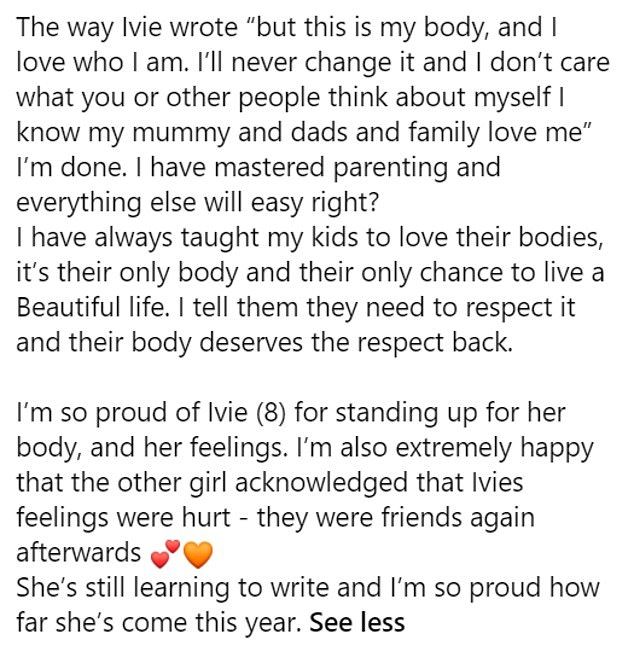 People on Facebook praised the eight-year-old's maturity, as well as Mel and her partner Nolan's parenting skills.

One commenter said," Amazing parenting moment. look at her go!"

Another said," Parenting done right. You should be so proud"

And one praised Ivie, "Well done Miss Ivie. So proud of you!"

Mell Watts is a mommy blogger based in Australia by the name, "The Modern Mumma". She is a mum to 4 kids and juggling life, kids, and marriage. She's a speaker and a writer and loves sweets and caravan trips. 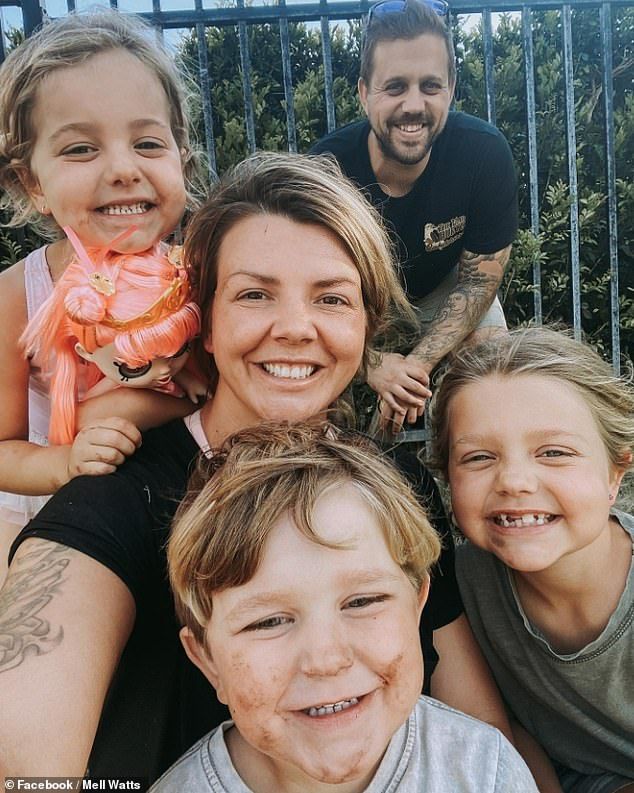