Arctic Walrus Takes A Nap On An Iceberg, Wakes Up In Ireland For The First Time In 17 Years

Posted by Abdul Rafay in Amazing On 24th March 2021
ADVERTISEMENT

Muireann Houlihan, five, and her father, Alan, spotted the walrus. It was discovered floundering on the rocky shores of Valentia Island in Kerry County. The juvenile walrus may have become stuck after falling asleep on an iceberg that floated south from Greenland, according to experts. 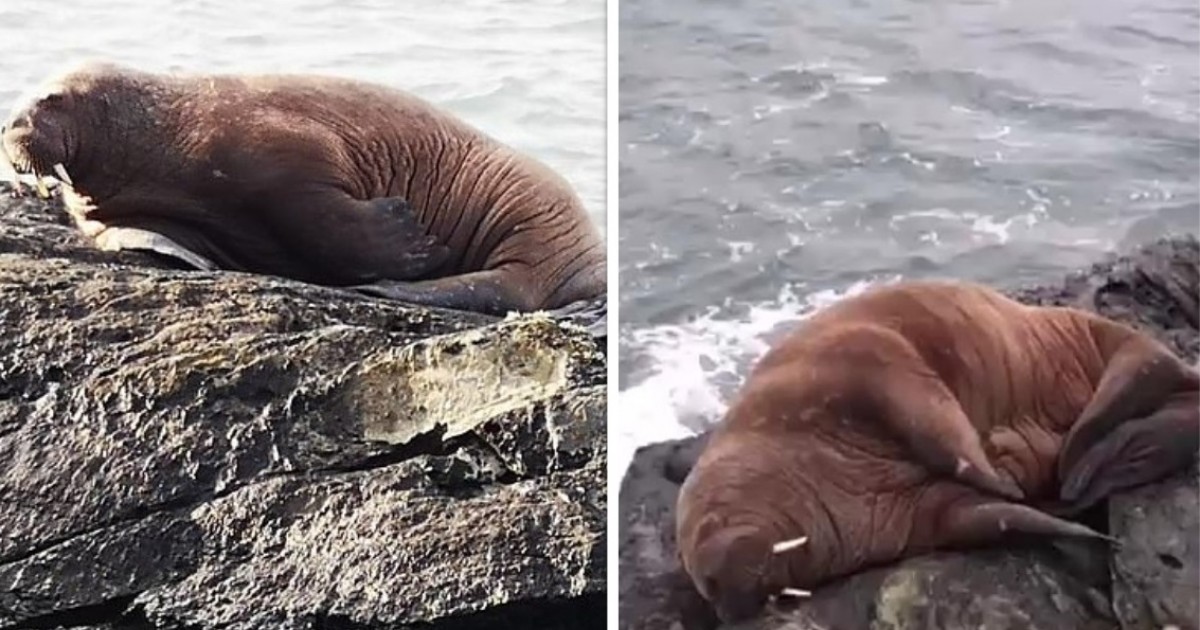 The huge animal was caught on camera as it floundered on the rocks of Valentia Island in County Kerry.

The exact circumstances surrounding the cow-sized beast's arrival in Ireland are unknown, but observers say the two-meter-long animal appeared exhausted.

One expert thinks the animal, which is believed to be a young adult, may have fallen asleep onto an iceberg that drifted south across the Atlantic from Greenland. 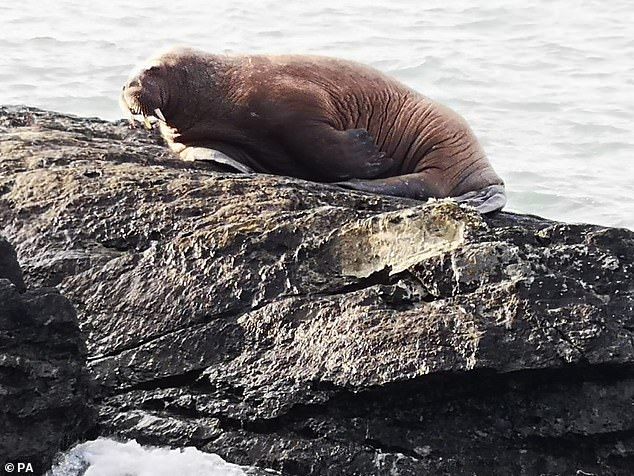 'It's very rare for one of these walruses to be this far south,' Dr. Peter Richardson, head of the ocean recovery at the Marine Conservation Society, told MailOnline.

'It's a long way from home but it seems like a fit, fat, young walrus which may be capable of making it home.

'They are known to travel vast distances but it's so unusual [for one to be this far south] that it's hard to say how it will be.'

He went on to say that there are plenty of mollusks for the walrus to feed in the area where it was found and that the walrus could be in the water, out of sight but still nearby. 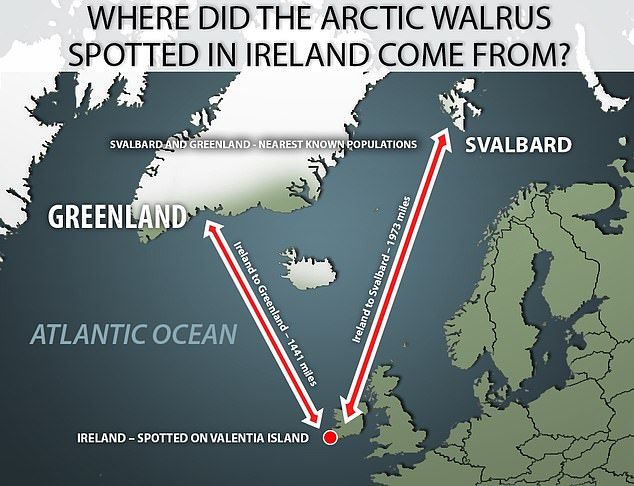 'People should report it to Irish Whale and Dolphin Group if they see it and not approach the animal as they are not the most friendly,' Dr. Richardson adds.

'They can be quite hard to spot in the water but it could still be around. It is well worth people keeping an eye out still.'

The North Pole, northern Russia, and Greenland are the most common habitats for this species. Greenlandic and Svalbard waters are home to the closest population.

He explained: ''Often it is adolescent animals that venture on long trips to find new areas to breed. 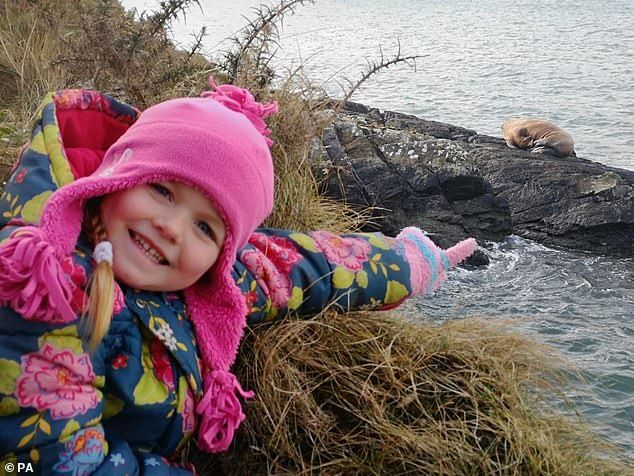 'Sooner or later they have to come to the shallows, i.e. less than 100-200 meters depth, to feed on mussels or clams. They eat up to several thousand clams a day.

'It is lost while it is far from any friends, but I am not afraid that it will die

The walrus is estimated to be a young adult by the Irish Whale and Dolphin Group (IWDG), but the gender cannot be determined because both males and females have tusks.

Its tusks are only about 12 inches long, but an adult's tusks can grow to be 40 inches long. 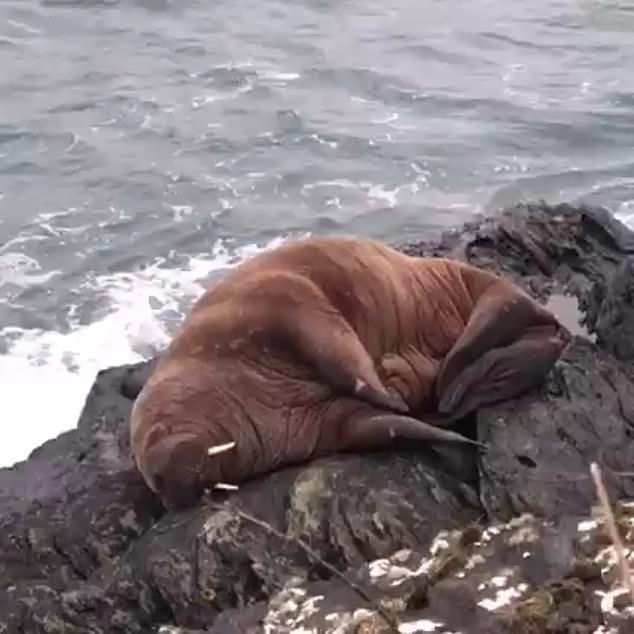 This was only the third confirmed sighting of a walrus in Ireland since 1999, according to the IWDG.

It said: 'The National Biodiversity Data Centre has 11 walrus records but the Natural History Museum suggests this number may be as high as 20 going back over several centuries. Either way, walrus sightings here are extremely rare.

'In mid-February, a walrus was photographed off the Danish coast and comparisons of images leave open the possibility that they may be the same individual.' 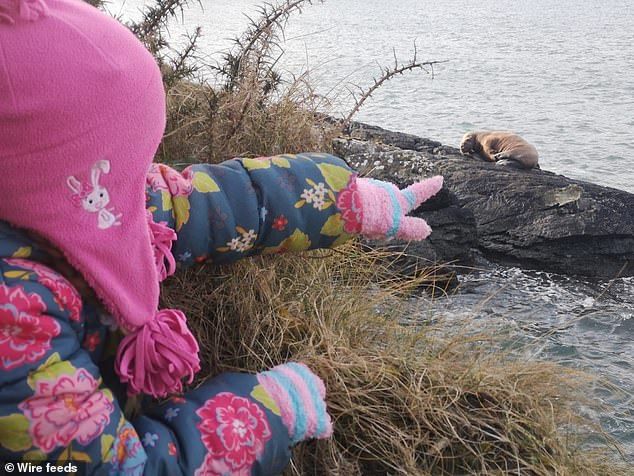 'We would ask members of the public fortunate enough to see it to observe this wayward traveler from a safe distance and to give it the space it requires.'

Alan Houlihan and his five-year-old daughter Muireann were the first to notice it. On his phone, Mr. Houlihan captured footage of the animal.

Other videos were shared online, and the presence of the animal was reported to authorities.

Mr. Houlihan told RTÉ Radio One's Morning Ireland that he and his daughter were out on a beach adventure when Muireann noticed something in the water. 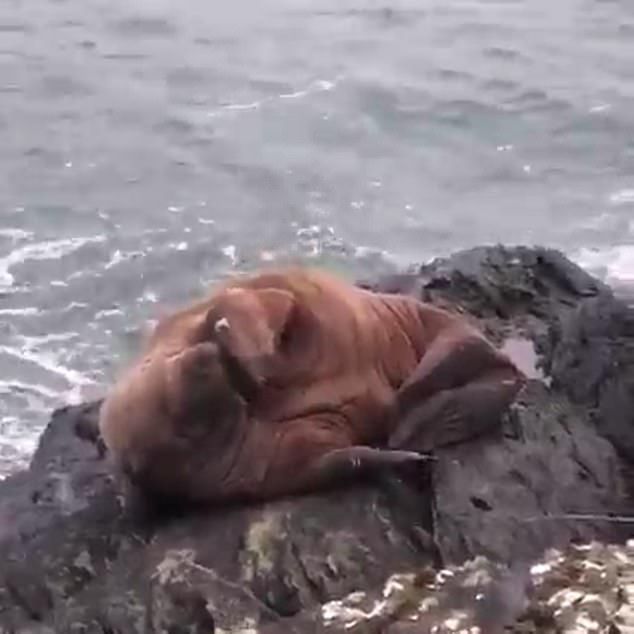 'I thought it was a seal at first and we went down to the water to investigate and I took out the phone and started recording,' he said.

'Next thing it was a walrus! And he breached out of the water and gave us a little show on the rocks — Muireann thought he was just having fun. It was just amazing.

'At first, I didn't [know it was a walrus] but within seconds I knew it was a walrus. It's just the sheer size of it, it's the size of a cow or a bull. I hadn't seen anything like it before, in Ireland anyway.'

Kevin Flannery, director of Dingle Oceanworld, told the Irish Independent: 'He's from the Arctic. I'd say what happened is he fell asleep on an iceberg and drifted off and then he was gone too far, out into the mid-Atlantic or somewhere like that down off Greenland possibly.'

The best thing for the walrus, according to Mr. Flannery, was rest and peace to regain energy before returning north to his native land, a journey of hundreds of miles.

Mr. Houlihan said he returned later in the day to the area, but the walrus had vanished.

On RTE, he expressed his hope that the walrus was eating scallops and resting.

And Muireann has come up with two names for the walrus: Isabelle for a girl and Cian for a boy.