With his newfound Internet stardom and being the center of memes, Father Tim Pelc of Detroit says about his fame, "I'm a little reluctant, if I didn’t have a mask on in these photos I probably wouldn't be as happy. But I'm perfectly happy being the masked avenger here." 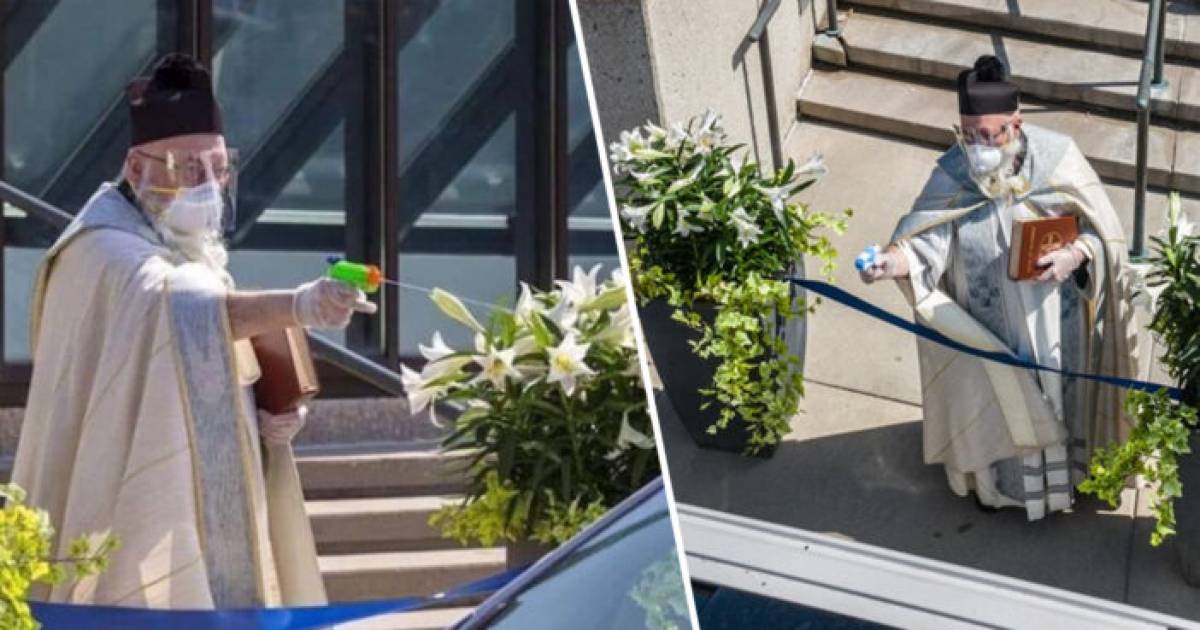 Father Tim Pelc is someone who does not use social media much but recently it has become kind of unavoidable for him. All credit goes to his socially-distanced holy service that has people taking pictures of him and sharing it online. Father Tim has become a meme over these pictures. 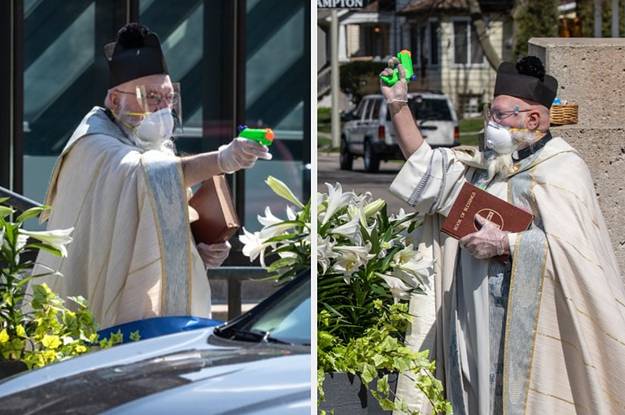 The photos, which were taken by parishioner Larry Peplin, received some attention when they were first posted by St. Ambrose Parish on Facebook in April. But they have recently gone viral on Twitter, and even sparked a Reddit Photoshop Battle.

This sudden fame from the Internet has come has as a surprise for Father Tim who has been giving his services to the parish for the last 30 years. The 70-yar old man is quite happy with his newfound fame and describes himself as a "pretty wacky mind and pretty accepting congregation." 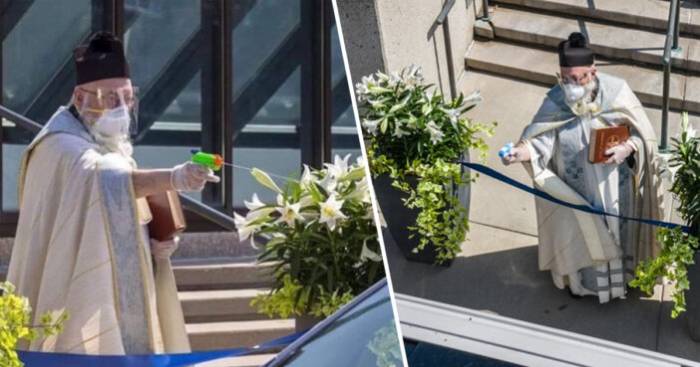 Talking to BuzzFeed News, Father Tim says the whole idea of using a squirt gun was for the kids of the parish as he wanted to do something for them. "The original idea was to do something for the kids of the parish. They were about ready to have an Easter unlike any of their past, so I thought, what can we still do that would observe all the protocols of social distancing?" 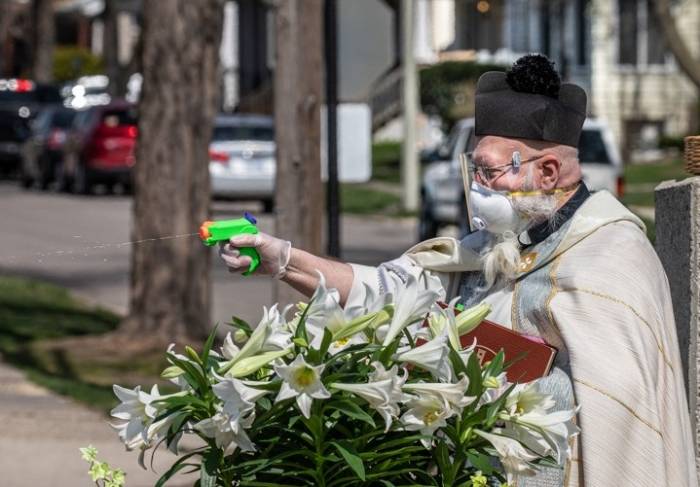 After consulting with his emergency room doctor in Detroit, Father Tim came up with a very unique idea of using water gun to bless his parishioners' Easter baskets from a safe distance.

"He said, 'not only is this safe, this is fun,' and he came with his kids," Father Tim said. "He provided me with all the personal protection stuff that I needed. The sun was out, we had a nice turnout. It was a way of continuing an ancient custom, and people seemed to enjoy it."

Father Tim says he is amazed how far the pictures have spread through social media, "It was a good news story and people were in the mood for something like that."

"It was big in Ukraine, and the Germans are funny, that led to a whole sub discussion about the types of water pistols," he added. "It even had two hits in the Vatican, which sort of concerned me but I haven’t heard anything yet." 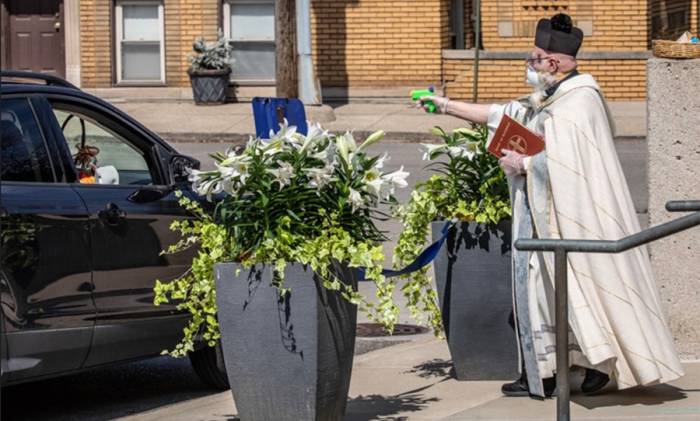 Christine Busque, who is responsible for managing the church's online page says she is thrilled to see how far the pictures have reached and the positive impact it is having on the world and how the world is appreciating Father's trademark thoughtfulness and creative flair.

“People wanted to have a bright side to the things that are happening in the world right now," Busque said. "They saw that, and I think they saw that he cared about his parishioners enough to want to keep his traditions alive but work [within] the CDC guidelines of being safe."

According to Father Tim, the pictures became a hit on social media not only because they were shared on a lighter note but also because these pictures serve as a ray of hope among all the chaos and panic due to the pandemic.

"I’m not objecting to it, this whole idea of combating evil is a good one," Pelc said. "When Jesus dies he doesn’t just lay around doing nothing, he goes down to hell and kicks the doors in, he really wrestles with evil. We all want to believe that the devil is not the most powerful force on the earth and neither is COVID-19."

Father Tim says he is happy that the public is taking lockdown and its measures seriously in his city. "Detroiters are taking lockdown very seriously. Michigan’s got a public face of a lot of people with their assault rifles protesting, but here in south eastern Michigan that’s not the mood I’m getting."

Father Tim and and the St. Ambrose Parish have been honoring the state's COVID-19 victims with blue ribbons tied around trees on the church's property.

"When the lockdown started we tied a blue ribbon on one of our trees and the first week we had six ribbons, then 60, then 675, now it’s close to 5,000," Pelc said. "Each of those pieces of ribbon represents someone who was loved and had a family, it brings tears to your eyes." 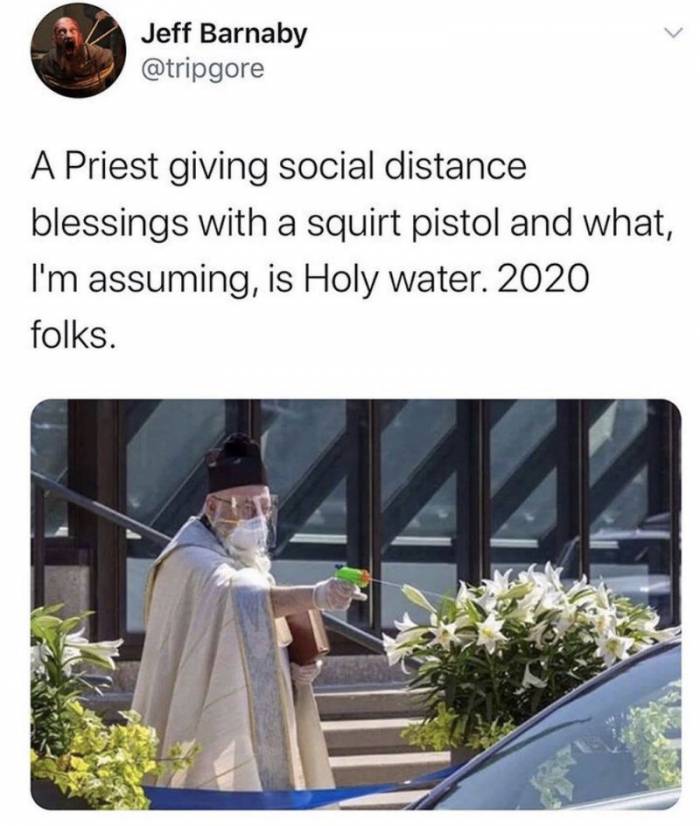 While the church waits to resume their services again, the parish has been doing their services online and their live streams have become quite popular with as many as three masses worth of people watching tuning into a Facebook Livestream, Father Tim said – that the parish is looking at permanent camera placements to broadcast to people even after the pandemic ends.

"We don’t think we can put the toothpaste back in the tube. Our broadcasts equal the number of people electronically as I would have on a normal weekend physically, and that tells me that there’s an audience out there."

Talking about his newfound fame and being the center of memes, Father says he is still getting used to this stardom. "I'm a little reluctant, if I didn’t have a mask on in these photos I probably wouldn't be as happy. But I'm perfectly happy being the masked avenger here." 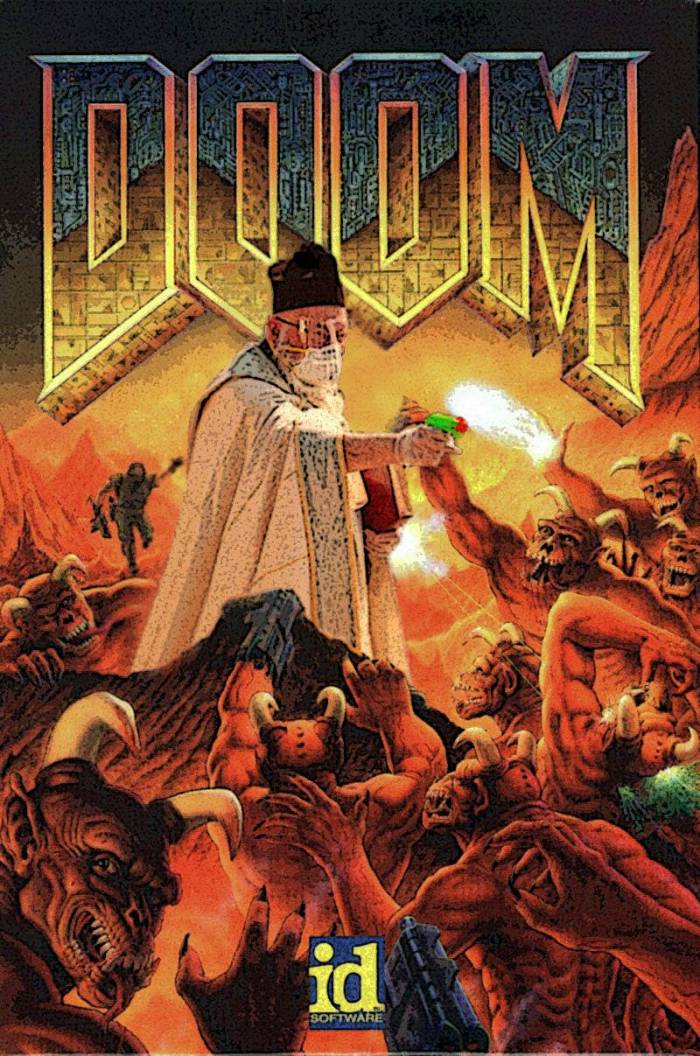