Posted by Sama in Bizarre On 2nd November 2020
ADVERTISEMENT

Umi Sushi, a Buckhead district restaurant in Atlanta, is facing backlash on the internet over a bizarre incident where a black couple was stopped from dining at the restaurant for sporting sneakers. The video has gone viral on social media and many people are now calling out the ban of the restaurant for its discriminatory behavior. 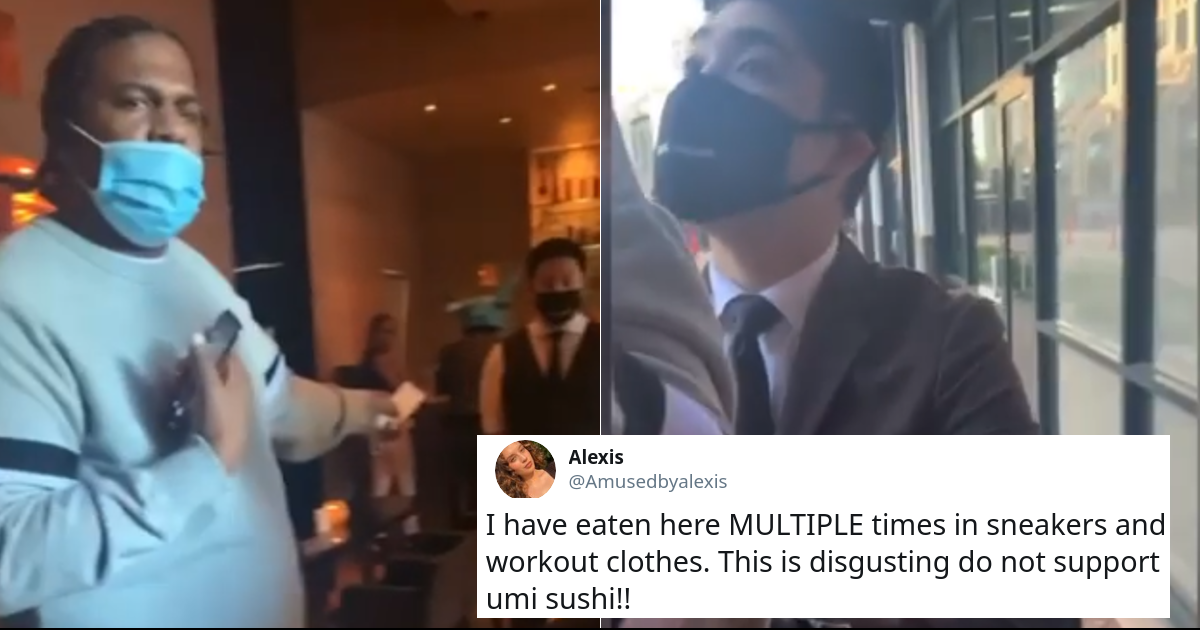 Dress codes for restaurants never make sense. It is ridiculous for people to follow the code of conduct if all they want is to relax and eat someplace nice. I mean who would want to dress up in a suit to go to a place only to eat their comfort food? Not at all comfortable.

Then comes those places where dress codes are based on discriminatory behavior. Different rules for different people. A recent controversy at this sushi restaurant has gained backlash and serious criticism over its pathetic treatment of its black customer over its 'no sneakers' policy. 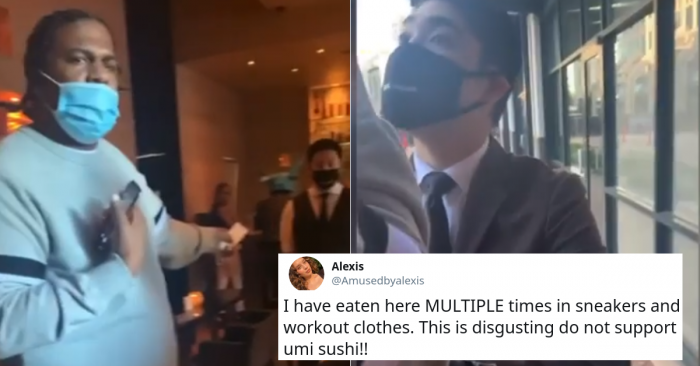 Video of the man being escorted out of the restaurant by a Umi staff member went viral on social media because he was asked to leave for wearing sneakers. Following the racist behavior, the customer pointedly told the staff that all other customers in the restaurant were wearing sneakers as well. He referenced one woman was wearing a pair of Adidas kicks who wasn't asked to go. 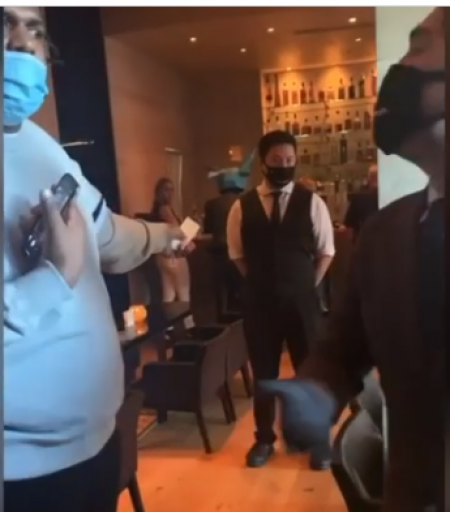 Kaylan Colbert, the man's wife stated that they were enjoying an intimate birthday dinner at Umi Sushi and were already seated when they were approached by a member of the restaurant's staff and asked to exit the premises. She said in a statement to Fox 5 Atlanta: "As we were walking out though my husband noticed a woman at the bar had on tennis shoes and that’s when everything had gone out the window at that point, because there are no rules here for some people, only for others."

Kaylan, who recorded the entire incident, continued, "If you’re going to have rules, they should apply to everyone and not just some people."

Kaylan asked why he was asked to leave for wearing sneakers, but other guests who were dressed in similar apparel were allowed to stay and eat without confrontation.

Farshid Arshid, who owns Umi Sushi, stated that the restaurant clearly delineates its dress policy on the eatery's entrance, but capitulates his staff should've better analyzed the situation before asking Kaylan and her husband to leave: "This was completely 100 percent an operational mistake on our end. When they got upset, we should have investigated that."

Following the criticism the restaurant faced on social media, the eatery contacted Kaylan and her husband for further clarification on the incident, but the woman has stated she doesn't feel comfortable eating there any longer: "We’ve seen this on the news over and over lately. Nobody wants to feel that way. Nobody wants to feel like they can’t go to certain places."

Yesterday a black man was kicked out of Umi Sushi in Buckhead for wearing sneakers. An older white woman was also wearing sneakers but was allowed to stay.. 🤔 pic.twitter.com/LeBEsOp0m5

Several people on social media pointed out that many of the sneaker-wearing customers who were left to dine without being accosted by Umi staff members were white, and believed that Kaylan's husband's skin color may have played a part in the restaurant's decision to ask the man to leave.

This is Umi Sushi in Atl, where the Middle Eastern owner & Asian workers practice the same anti-Black racism as white supremacists. They tried to pull the ol’ “racial dress code” tactic on a Black couple, & then started making up more dress code rules when they were called out pic.twitter.com/WWE3jW6aFH

People took to social media to call out the ban on the restaurant and some people even went to the restaurant to see how they would respond to them wearing particular articles of clothing, in the instance of Jerome Trammel, he was wearing a Black Lives Matter t-shirt.

Many others pointed out that they frequently visited the restaurant wearing sneakers but no one ever pointed out this bizarre rule to them.

ANYONE THAT LIVES IN ATL, PLEASE DO NOT GO TO UMI SUSHI EVER AGAIN. PLEASE CLICK THE LINK BELOW. MY FRIENDS HUSBAND WAS DISCRIMINATED BECAUSE OF HIS SHOEShttps://t.co/t6ac4z0XJT

UPDATE: I went to the racist Umi Sushi Restaurant, they didn’t let me in but called the police on me because l looked ‘suspicious’ aka had on a #BlackLivesMatter shirt. So I left, recorded an audio message & went back to play it on my car’s loud speaker. pic.twitter.com/QCjSz4MTcb

I have eaten here MULTIPLE times in sneakers and workout clothes. This is disgusting do not support umi sushi!! https://t.co/W6n8KK2hxa

The restaurant has posted an official apology on its page.

We are regretful and apologetic that the incident escalated in the manner in which it did. At the heart of the issue, our co-owner, Farshid Arshid, inappropriately expressed his frustration, and he is ashamed. As a brown person of color himself, Farshid is deeply saddened by the accusations of racism. “I myself having endured countless acts of racism as a middle Easterner against myself and my family, would never intentionally subject any person of color to any act of racism. Especially the African American community who has welcomed me with open arms in the past 27 years of my residence in Atlanta. In the heat of the moment, I made an awful decision and took regretful actions in attempting to reinforce our policy. And for that, I’m sorry beyond words,” says Arshid. In respect of the incident, Umi will be closed until Thursday, November 5th. We are taking some time to reflect on our mistake. We’ll retrain our management and staff on cultural sensitivities and policy protocol, and allow time for the community we’ve hurt to heal. We’ve learned a lot from this lesson, and we’re asking the entire community for grace as we optimistically look forward to brighter days ahead. Our intent at Umi has always been to spread love through our food and have everyone feel that love. Right now, we’re more dedicated to that than ever. Umi will be reopening with lessons learned, a new approach, and a commitment to maintaining an inviting environment for all patrons. Much love, your Umi team.