Choosing Pets Over Babies Is ‘Selfish And Diminishes Us’, Says Pope

Posted by Abdul Rafay in News On 10th January 2022
advertisement

Pope Francis has indicated that couples who prefer pets to children are selfish, which is likely to infuriate millions of cats, dogs, and their human cohabitees. Substituting pets for children "takes away our humanity," the leader of the world's 1.3 billion Catholics said, wading into a discussion known for its toxic tone on social media.

While speaking to a general audience about Saint Joseph serving as Jesus' "foster father," Pope Francis, 85, said, according to translation from Vatican News, "Joseph shows us that this type of bond is not secondary; it is not an afterthought, no, this kind of choice is among the highest forms of love, and of fatherhood and motherhood. How many children in the world are waiting for someone to take care of them?"

He praised individuals who chose to adopt children before moving on to couples who prefer to have pets instead of children. 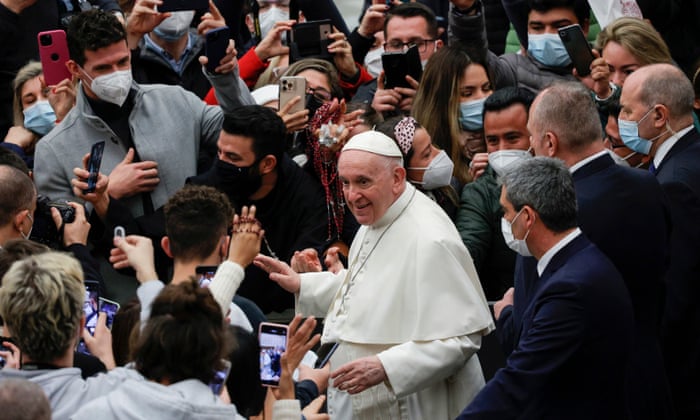 "Some people don't wish to have children, or maybe just one or two. Many couples don't have children, perhaps because they do not wish to, or they only have one and not more,” Pope Francis said. "But they might have two domestic animals, two dogs or cats. This is quite a contrast."

He said that "giving up on being a mother or father can take some of our humanity away from us," adding, "society becomes older and without humanity because we lose the richness of motherhood and fatherhood. Nations suffer from this."

"We need to be open to motherhood and fatherhood otherwise we can be lacking in ourselves and we can lack in humanity," Pope Francis said.

The Pope is no stranger to discussing marriage and families openly. The Catholic Church will not bless same-sex unions, according to a Vatican declaration issued by Pope Francis in March 2021, because God "does not and cannot bless sin."

Following Pope Francis' declaration of support for same-sex civil unions, the statement acted as an official response to doubts about the Church's capacity to bless same-sex marriages.

While the Vatican stated that the society should treat LGBT individuals with "respect and care," their partnerships would not be welcomed in the same way, as Catholic teachings state that weddings should be between a man and a woman to generate new life.

"For this reason, it is not licit to impart a blessing on relationships, or partnerships, even stable, that involve sexual activity outside of marriage, as is the case of the unions between persons of the same sex," the statement said.

While such connections have "positive characteristics" that are "loved and cherished," the Vatican says it "cannot justify these relationships and render them legitimate objects of the ecclesial blessing."

"The declaration of the unlawfulness of blessings of unions between persons of the same sex is not, therefore, and is not intended to be, a form of unjust discrimination, but rather a reminder of the truth of the liturgical rite and of the very nature of the sacramentals, as the Church understands them," the statement said.