Chrissy Teigen has deleted her Twitter account, saying she has been left "deeply bruised" by "negativity" on the platform. 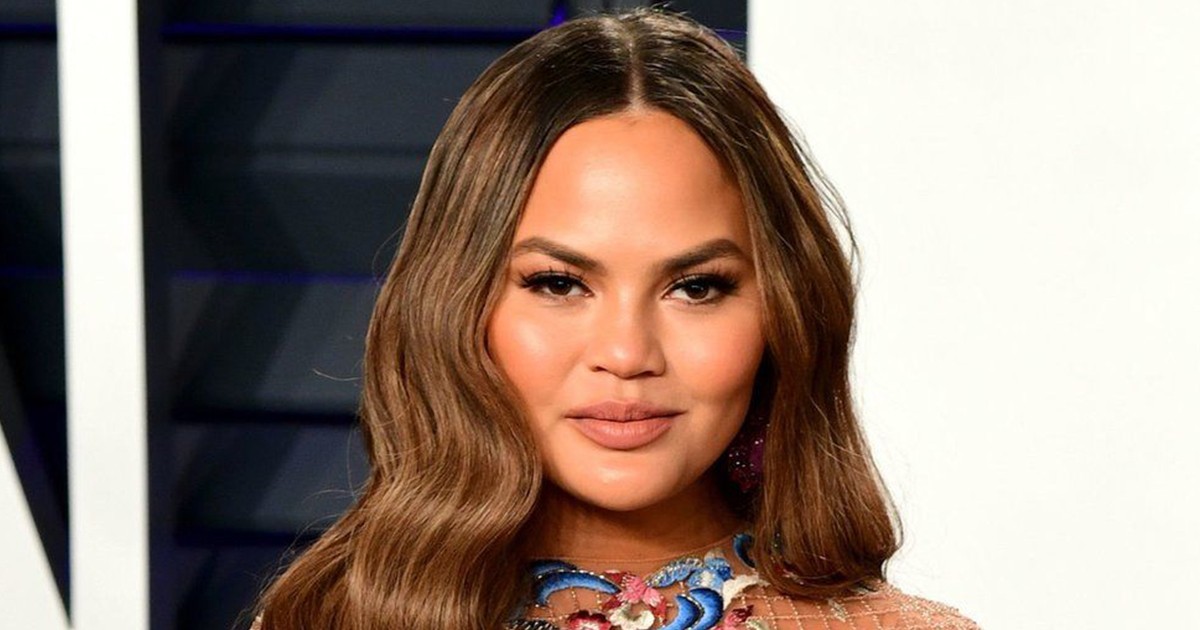 Late on Wednesday she last tweeted, saying it was "time to say goodbye" as Twitter had made her a "different human". 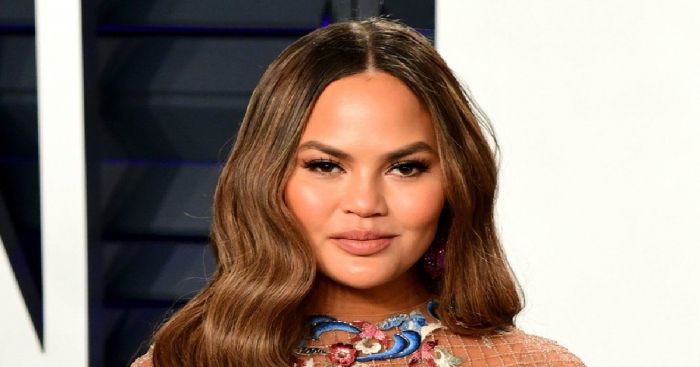 She further announced: “Hey. For over 10 years, you guys have been my world. I honestly owe so much to this world we have created here. I truly consider so many of you my actual friends,” Teigen posted on Wednesday night in a series of tweets. “But it’s time for me to say goodbye. This no longer serves me as positively as it serves me negatively, and I think that’s the right time to call something.”

The model and cookbook author had more than 13.7 million followers — and another 34.4 million on Instagram, where she shares her cooking projects, sharp quips and (usually humorous) behind-the-scenes looks at her marriage with singer John Legend. 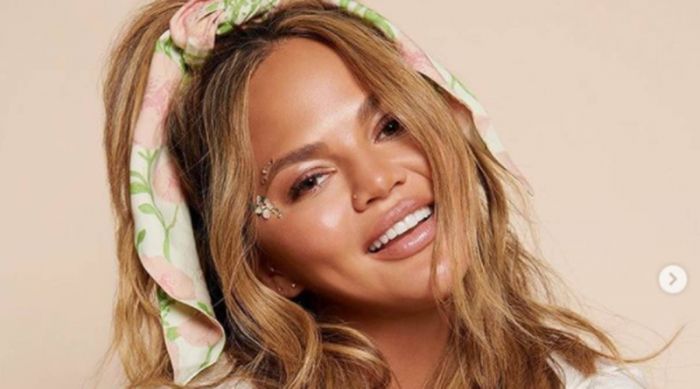 My life goal is to make people happy. The pain I feel when I don’t is too much for me. I’ve always been portrayed as the strong clap back girl but I’m just not,” Teigen added. “My desire to be liked and fear of pissing people off has made me somebody you didn’t sign up for, and a different human than I started out here as! Live well, tweeters. Please know all I ever cared about was you!!!”

She was also one of the celebrities targeted by adherents of QAnon, the sprawling set of false claims that have coalesced into an extremist ideology radicalizing its followers. 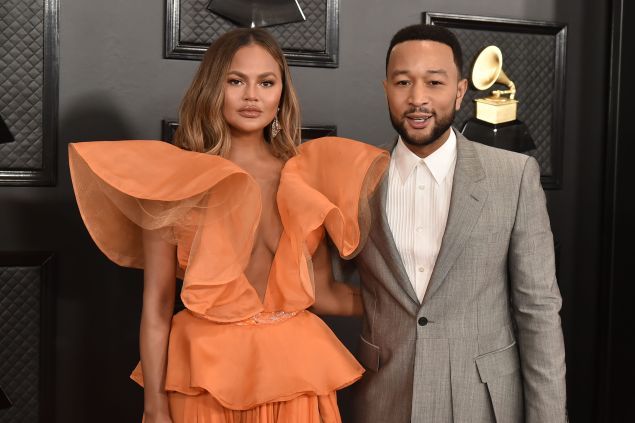 Her responses, or “clap backs,” to critics were an integral part of her online brand.

Her departure from Twitter came on the heels of her announcing her partnership with Kris Jenner to create a line of plant-based cleaning products, which drew criticism online. “Seems pretty tone deaf. Two wealthy women with housekeeping staff, marketing cleaning products to the middle class in the midst of a pandemic,” one critic said in a now-deleted tweet. 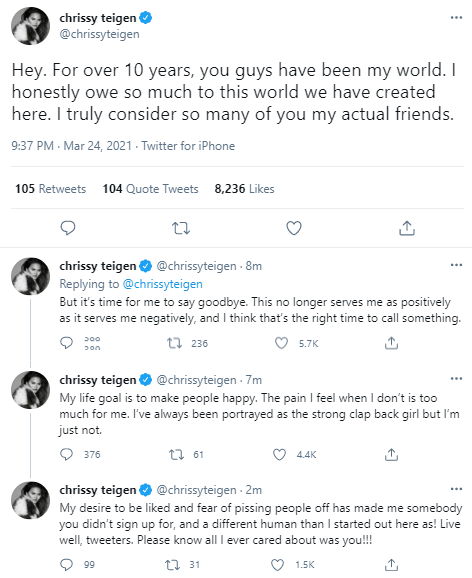 The Twitter brass has long been criticized for failing to adequately combat harassment, and Teigen’s departure has reignited conversation.

“Chrissy Teigen quitting Twitter is a really, really bad reflection on the company's ability to fight abuse. She wasn't just some famous person. She was a power user, and a fan favorite internally (she spoke at Twitter's companywide retreat in early 2020). This one will sting,” tweeted Bloomberg reporter Kurt Wagner.

Signing off she said: "Please know all I ever cared about was you!!!" And a final post with a heart appeared before her account was deactivated.

She was particularly lauded for publicly discussing issues like her miscarriage and breastfeeding on social media — helping normalize topics that aren’t often spoken about. 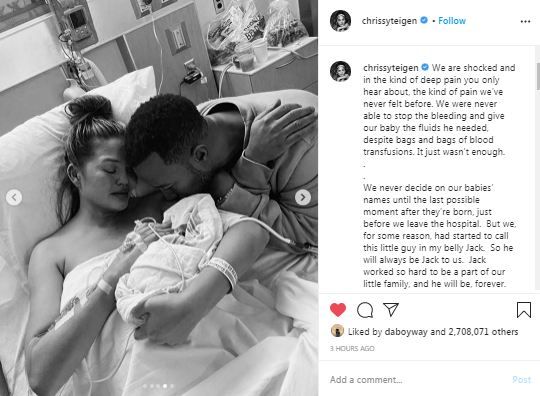 She was revered for her bravery, with many baby loss organisations thanking her for breaking the stigma.

But not all the responses were positive and Teigen yesterday admitted she was "sensitive", adding: "One thing I haven't learned is how to block out the negativity"

Her prominence only grew as she traded insults with President Donald Trump on the platform. Trump blocked Teigen during his first year in office but still tweeted about her, calling her “boring” John Legend’s “filthy mouthed wife.” 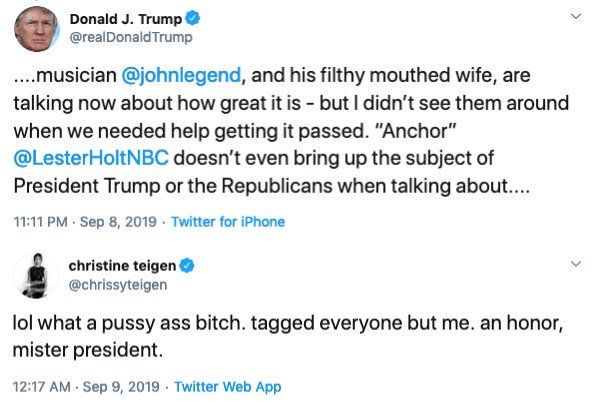 She demanded the presidential account refollow her when Joe Biden took office.