Posted by Sama in Feel Good On 23rd February 2020
ADVERTISEMENT

After struggling a lot with pregnancy and infertility issues, Dustin and Caren decided to go for adoption. The couple adopted a beautiful baby girl and were flying home from California. After the flight crew learned Dustin and his wife's adoption story, they decided to arrange a heartwarming baby shower for the couple and their new family member and along with the passengers on the plane they did something so touching that it might move you to tears. 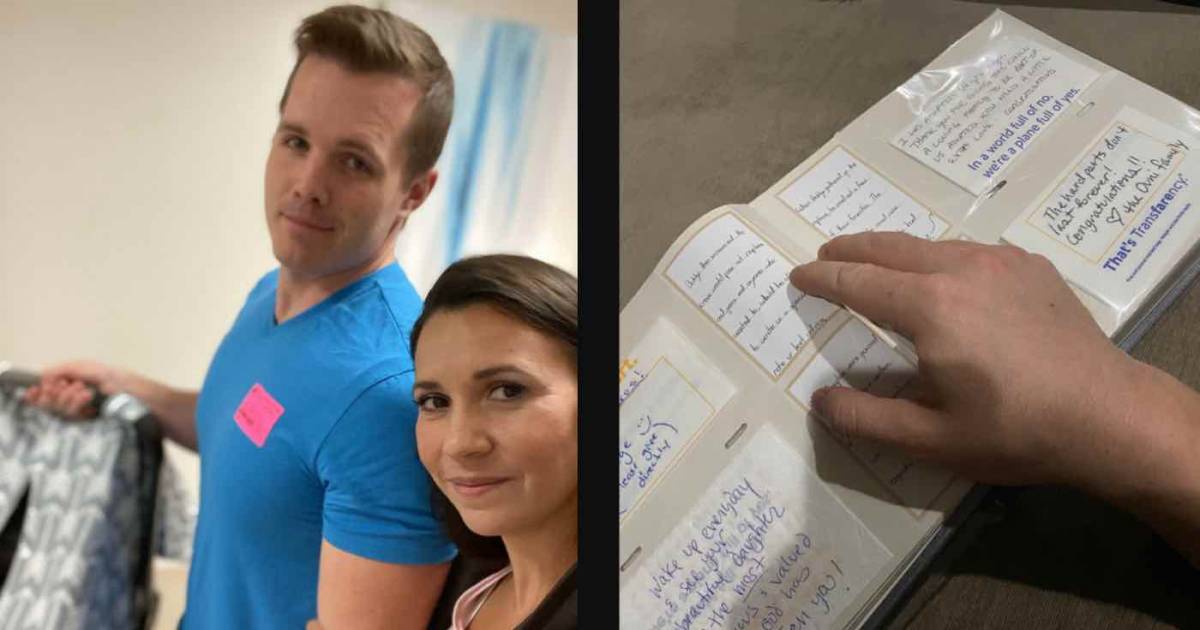 #1 Receiving a beautiful surprise from a bunch of strangers

Baby showers are usually held before the birth of the baby by the loved ones. Its a gesture of love that s shown by family and friends to welcome the baby into this world. However, its never too late even it is celebrated after the child is born. 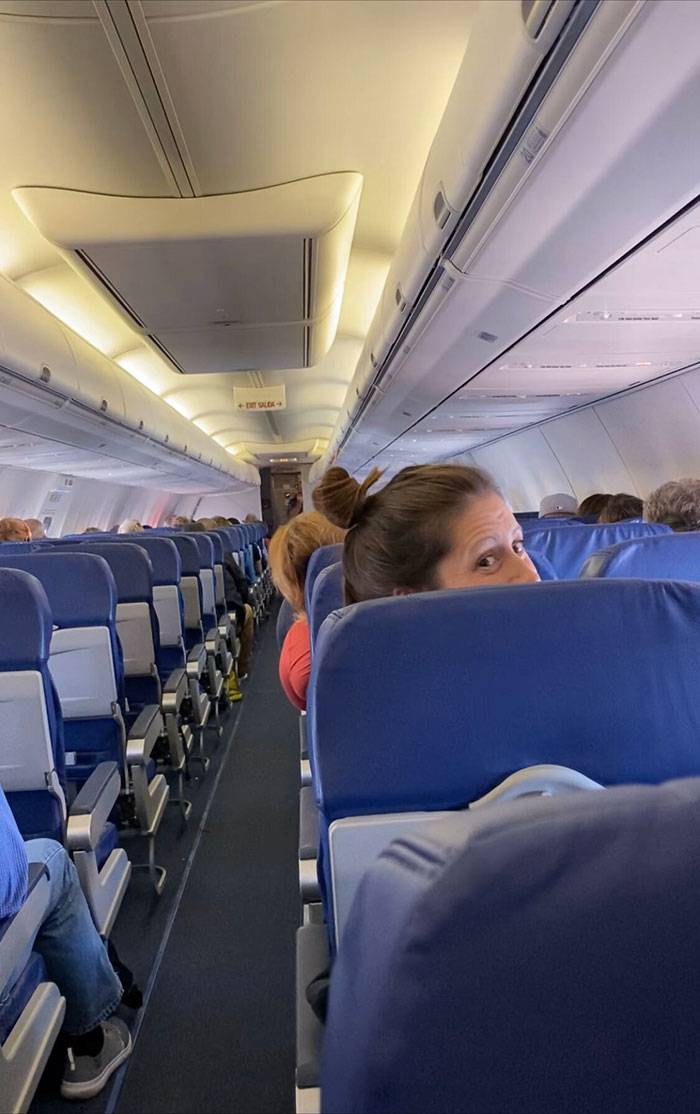 For Dustin and Caren Moore, their life became perfect when they adopted their newborn daughter. But little they were aware that they were going to receive such a warm congratulatory party from a bunch of strangers.

#2 Taking their new family to home

Dustin and Caren were traveling home from California earlier this month with their adopted child. Dustin told Bored Panda, “In truth, deciding to adopt came up when we were unable to figure out our infertility. We lost multiple pregnancies through treatments and were never given any answers as to how to maintain them. For us, it took about a little over a year. Adoption is by and large two major tasks broken down – get certified to adopt, then find a baby. It took us about six weeks to get certified, and four months later it was when a birth mom reached out to us. She gave birth to our daughter the following November.” 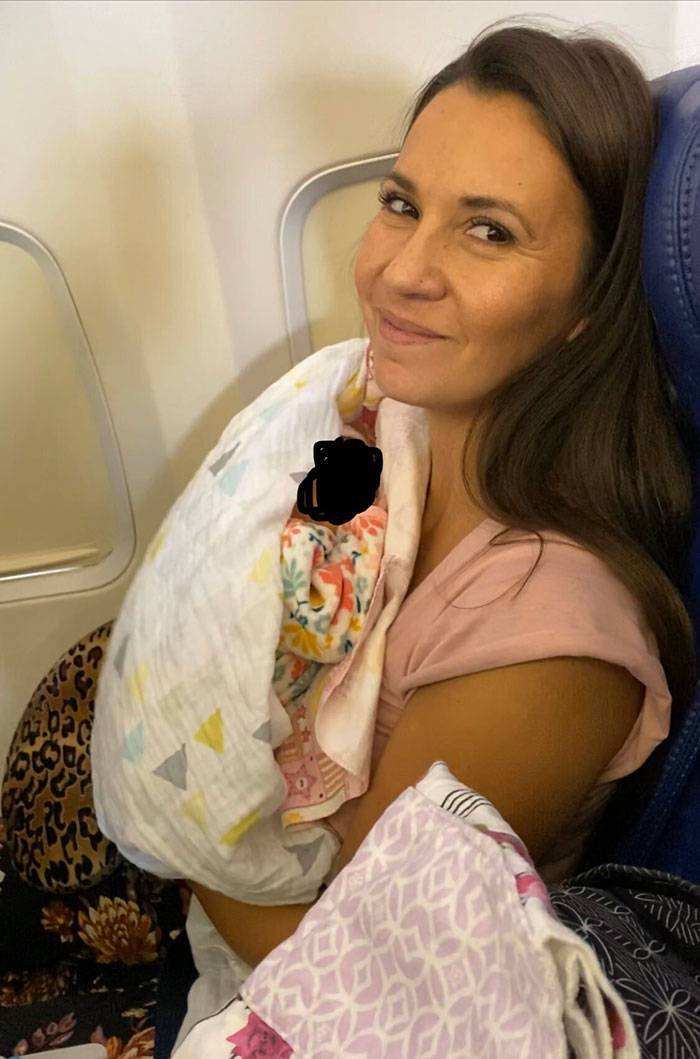 Traveling with a baby just months old, during their flight a flight attendant approached them to ask that why were they traveling with a newborn. At this point, Dustin was compelled to share his adoption story. 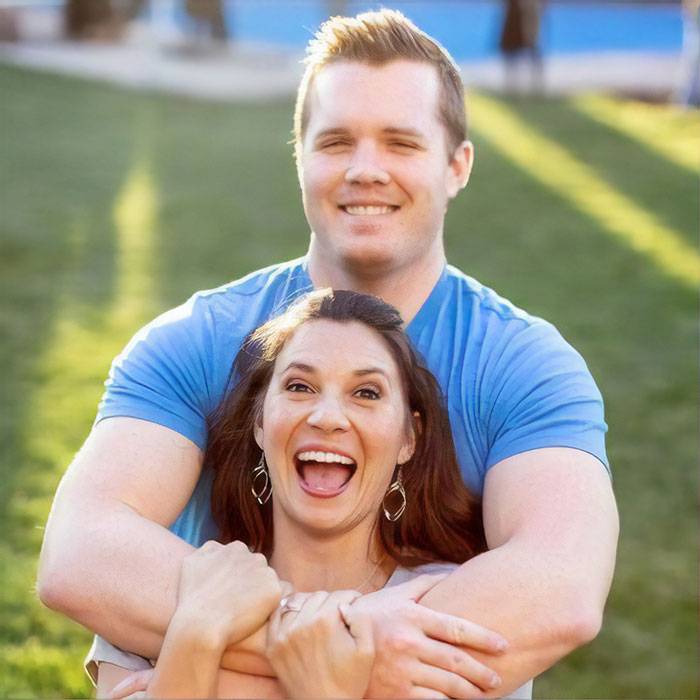 Hearing the story, the flight crew decided to throw a surprise baby shower to welcome the newborn on the plane and encouraged the passengers in lane to write their advice for new parents on napkins. “Didn’t quite put together what was happening in the first split seconds. He named her daughter, mentioned how old she was, and when he mentioned us was when my brain clicked. When everyone cheered though, we both tested up. The show of love from perfect strangers made us feel encouraged, like people were rooting for us,” Dustin said.

The couple was then gifted a pilot wing along with 60 napkins with heartwarming messages written by other passengers. “There were lots of notes. Among some that I didn’t mention in the tweet were to get a dog, to make sure we always told her we loved her. My favorite was the person who said they were adopted 64 years ago, because it made me imagine our daughter on some future flight telling a newly adoptive couple something similar as what we heard.” 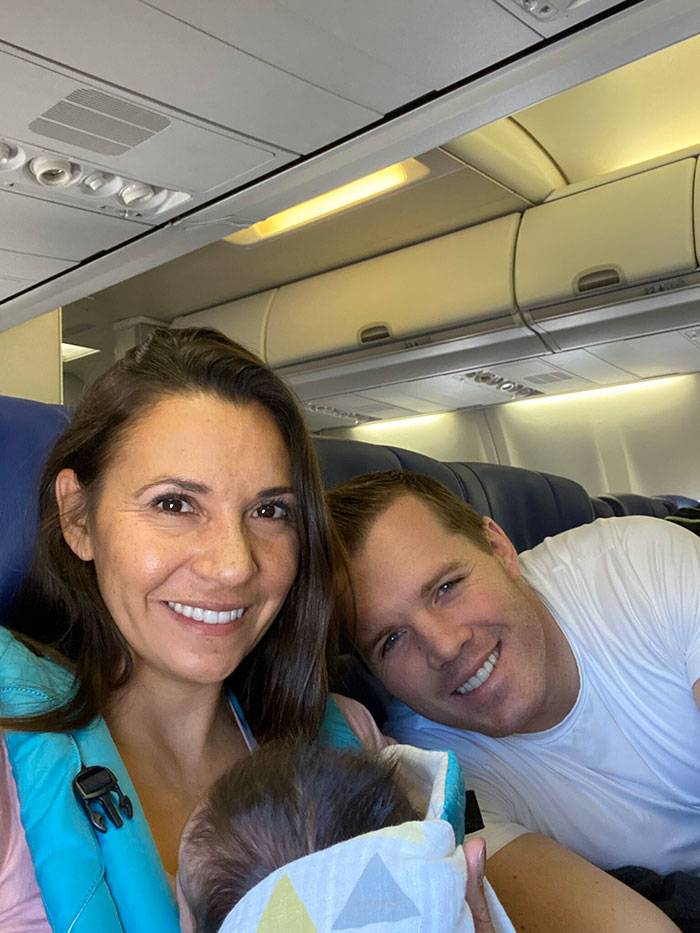 For people out there, who are hesitant about adoption, Dustin has an important message for you all, “We were initially hesitant to adopt. Your fears, your worries, and the uncertainties are all reasons to have. And while you’ll need to invest a little more emotionally because of these feelings, I promise that the payout will exceed anything you could have imagined.”

#5 Dustin shared the heartwarming story on his social media account 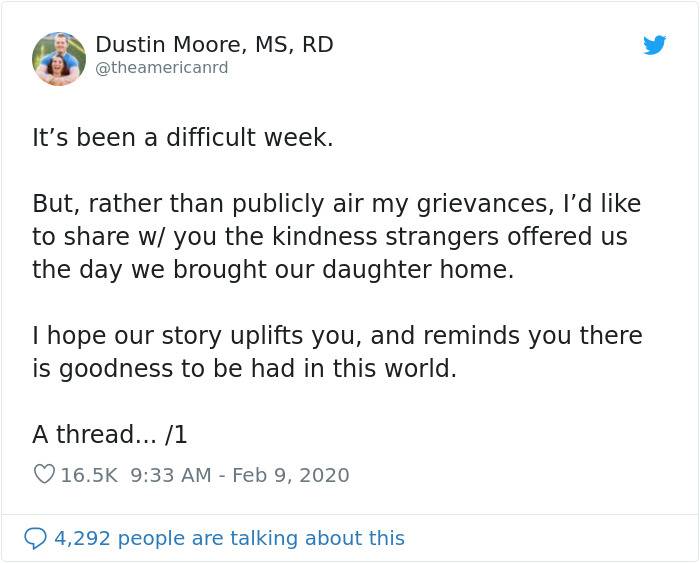 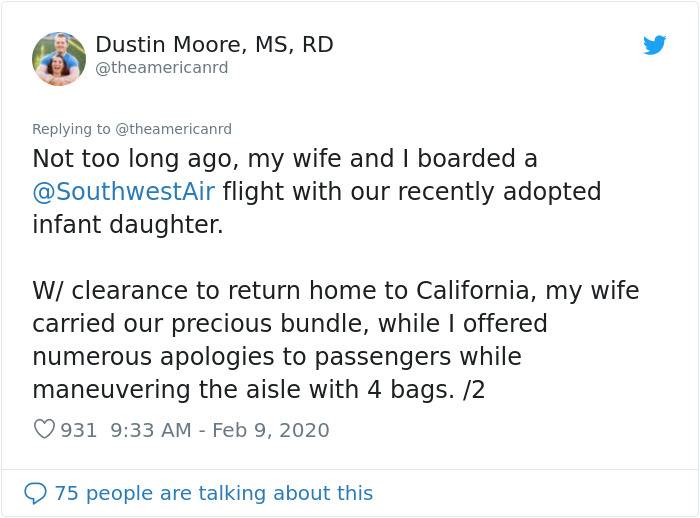 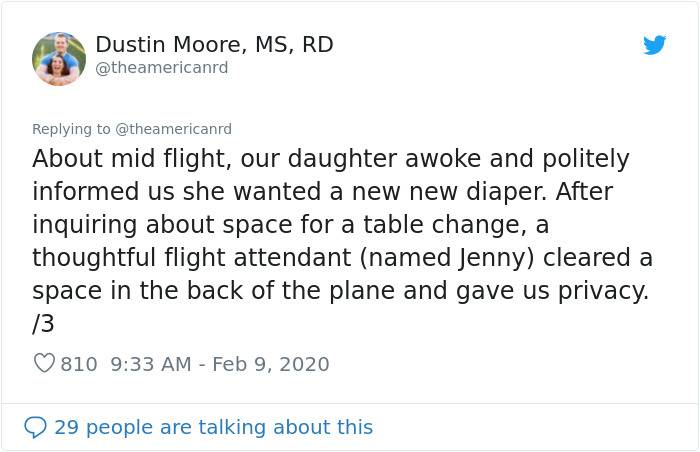 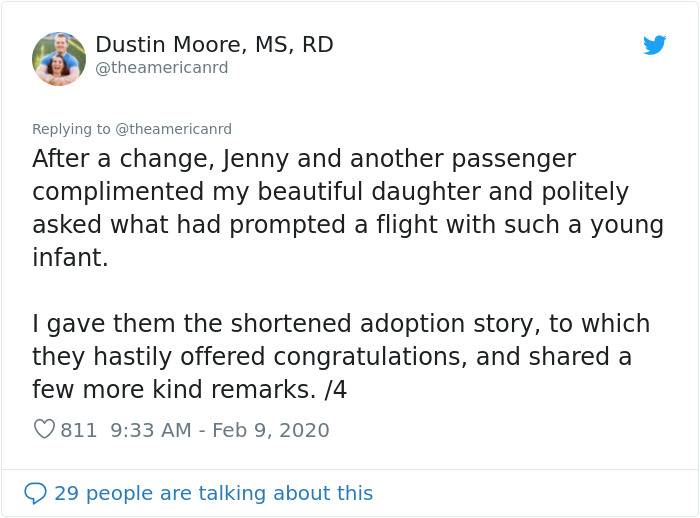 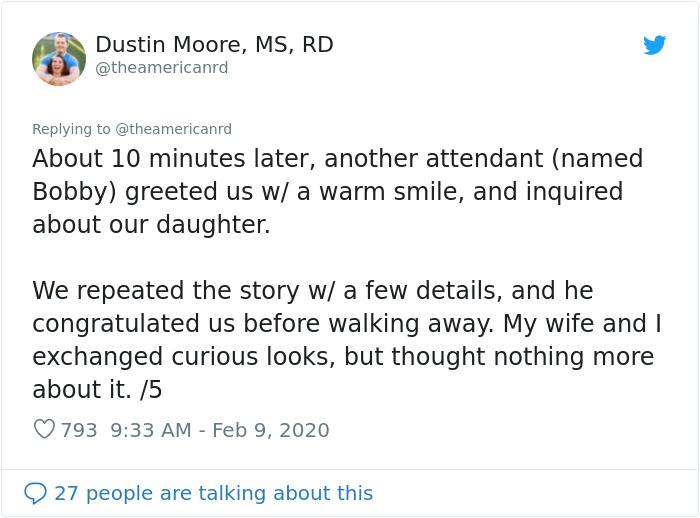 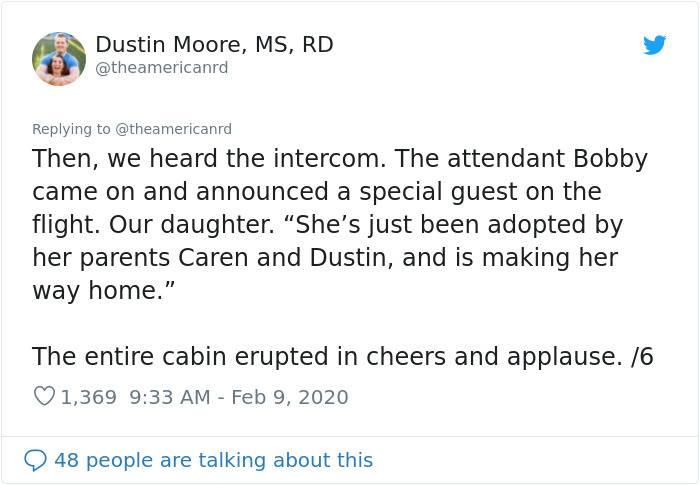 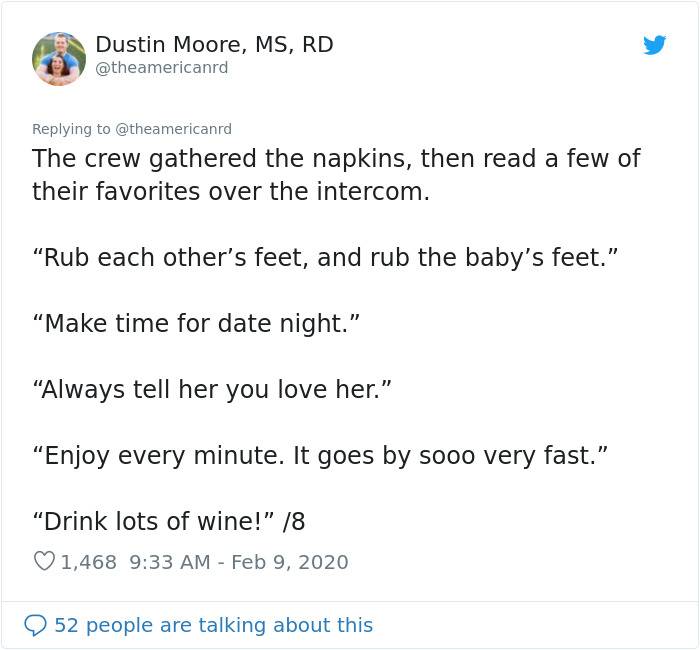 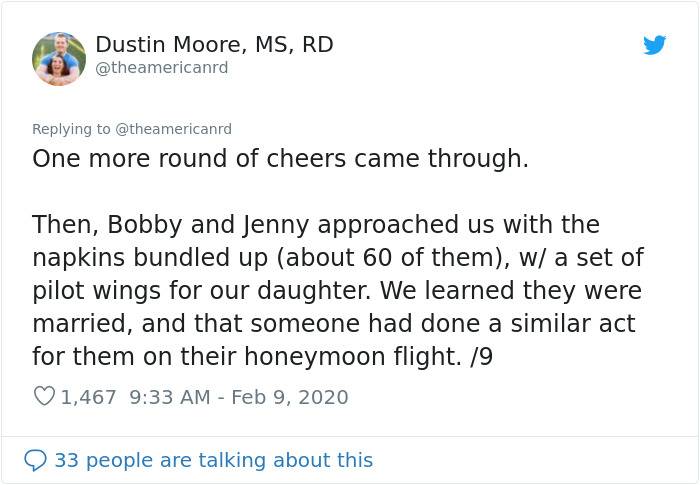 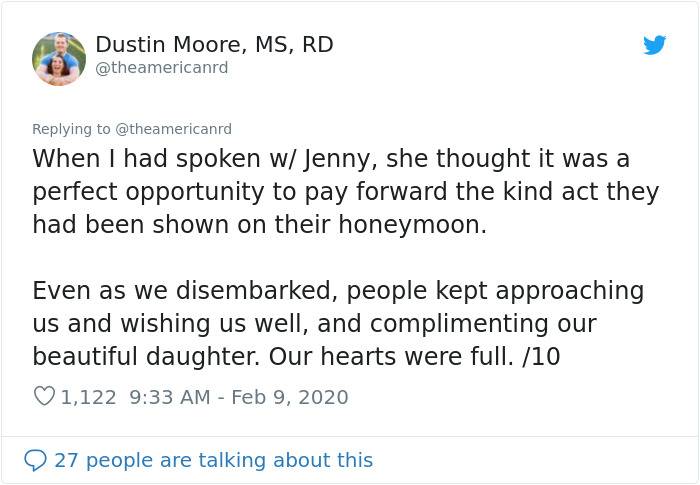 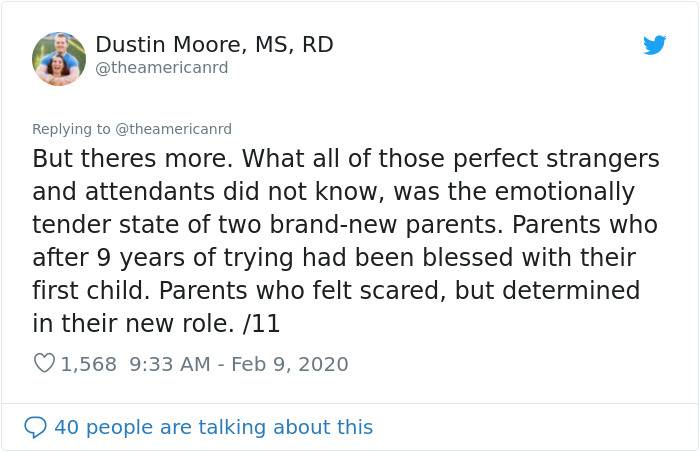 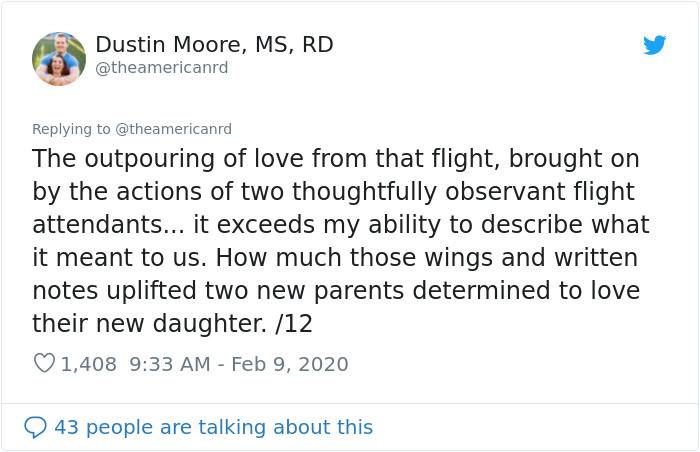 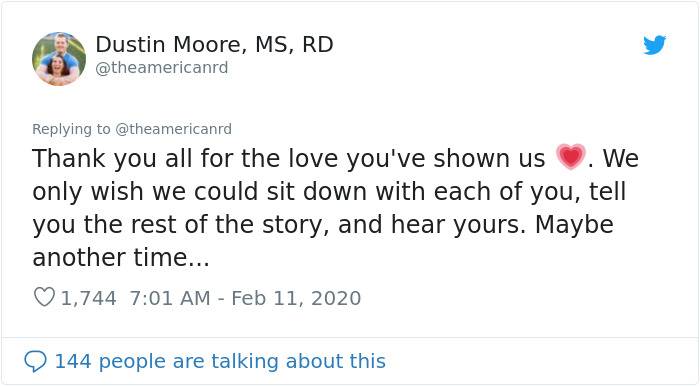