Creepiest Fetish Requests People Have Made

Posted by Annie N. in Cringey On 23rd September 2021
advertisement

When it comes to fetishes, they can often be on the creepy side. These requests however will have you asking, ‘Why?’ 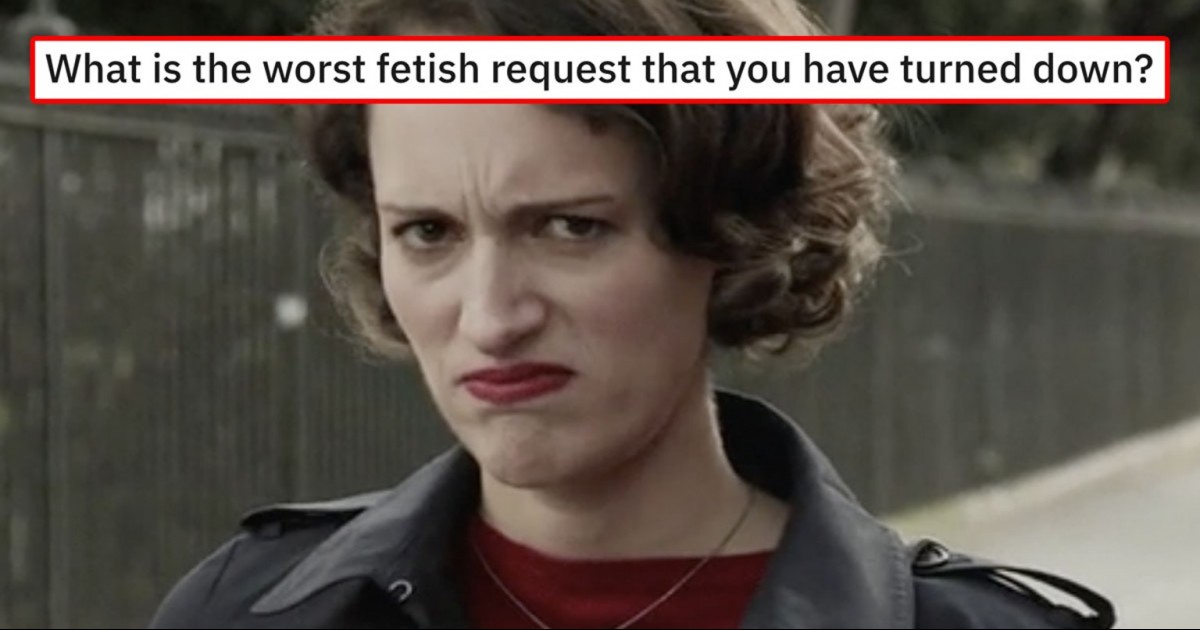 Just get a quick arm workout in

"I had some guy literally ask me to punch the absolute shit out of his chest. Like he literally liked to be hit….hard. That’s a fuck no for me, I’m not trying to mma some dude, mid fuck."

Keeping it in the family, we guess.

"I once had a guy ask if I could fuck his dad while he listened from another room. I thought he was joking and I laughed in his face. Like, big guffawing laughs.

Narrator: He was not joking."

That's one breath away from a life-sentence

"I had a good friend from work ask me to strangle her in the girl's bathroom until she passed out, she "promised to come back to life" Said it was one of her fantasies to get strangled by a co-worker

"A Japanese guy asked me, Korean, to role-play being a comfort woman."

To provide context as to why this was such a horrific request.

"This is so shocking to me. I tried to really imagine the impact it must have on you and I realised the equivalent of this in my country would be something like being asked by a german guy to play Anne Frank or something about concentration camps. I just can't even..."

That's a rather large commitment for a moment's ecstasy

"He wanted me to stop taking birth control so he could make me pregnant.

Keeping it fun in the bedroom

"My ex had a fetish for balloons and wanted me to bounce on one until it popped.💀"

"Having my ex-boyfriend watch me through the phone when giving him a BJ, using a Final Fantasy, cat ear filter on me. Like wtf"

Imagine sitting in your room, recording yourself burping

"A guy I met online wanted me to burp on command for him. Like, I can belch like a man three times my size, but it’s not something I can control. He was so demanding about it, kept pestering me to send him an audio recording."

Just trying to understand the logistics of this one

"Dated a guy in college who had a quicksand fetish

I don’t even know how that would work (also, where does quicksand even exist? I live in the Midwest USA) so I obviously turned it down."