Posted by Michael Avery in Bizarre On 1st May 2016
ADVERTISEMENT

Vyacheslav Oliynyk – who won gold for Ukraine in 1996 – shrugged off pepper spray and police batons as officers attempted to restrain him in Kiev.

And Oliynyk, who’d been celebrating his 50th birthday, showed he’d lost none of his fearsome skills since the Atlanta Olympics in the US.

An extraordinary video of the catchweight bout, released by traffic officials who witnessed the bizarre exchange, shows the wrestler arguing with police over why his car was stopped.

He appears to shove one of the officers who they shoots pepper spray into the former athlete’s face. 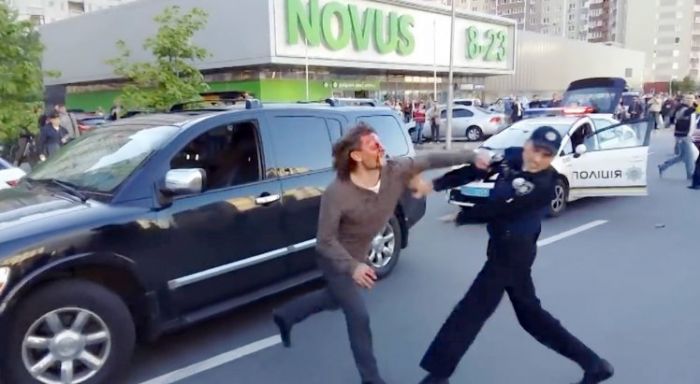 But instead of calming him, it just seems to make Oliynyk angrier, so the officers weigh in with batons.

Even when bleeding heavily from wounds on his head and face, the champ launches round two and sets about the officers again.

It finally takes seven police officers to grapple Oliynyk – who these days seems to be a touch above his Olympic fighting weight of 90 kilogrammes (14 stone) – to the ground.

But even then, he keeps using his wrestling skills to prevent them from getting him in a leg lock or putting handcuffs on.

Then when a female officer crouches down to talk to him and explain the arrest he politely replies: ‘Go f*ck yourself.’ 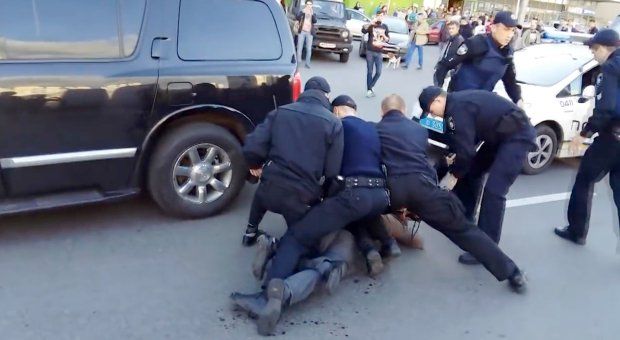 He only calms down when friends he was with tell him to go quietly for the sake of his young son who was crying in the car.

He told local media: ‘I admit I was partially guilty, I can’t tell you the whole thing.

‘I’m partly guilty because I did not stop and I was ignoring the police.

‘But I am not a criminal. As far as I can see there will be a court hearing and they will punish me somehow because they always do.

‘However the fact that police let me go home on the same day shows I didn’t do anything that bad.’ 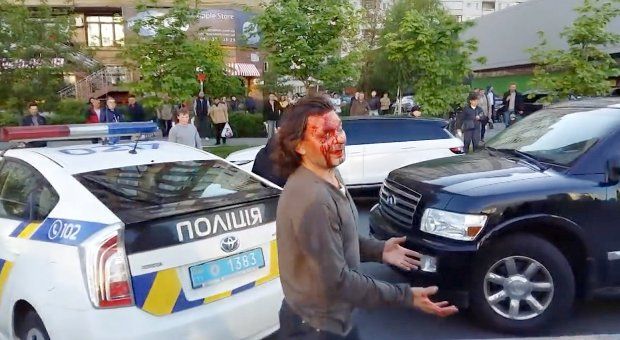 “That bad” in Russia = fighting seven police officers after being pulled over for drunk driving, whereas doing anything nowhere even CLOSE to that in the United States will get you shot. Fun times.