Posted by Sama in History
ADVERTISEMENT

The last time we visited the museum was probably back in primary school. Full of amusement we used to love such visits. The fascination and wonder were definitely worth the hype over watching such interesting things. Well, the things that we will share today will change your mind for good. A few days ago, the Yorkshire Museum in England started the #curatorbattle hashtag on Twitter and challenged other museums to share some of the creepiest exhibits they have, and needless to say, they did not disappoint. Go through these and let us know in the comments which one of these creeped you out the most. 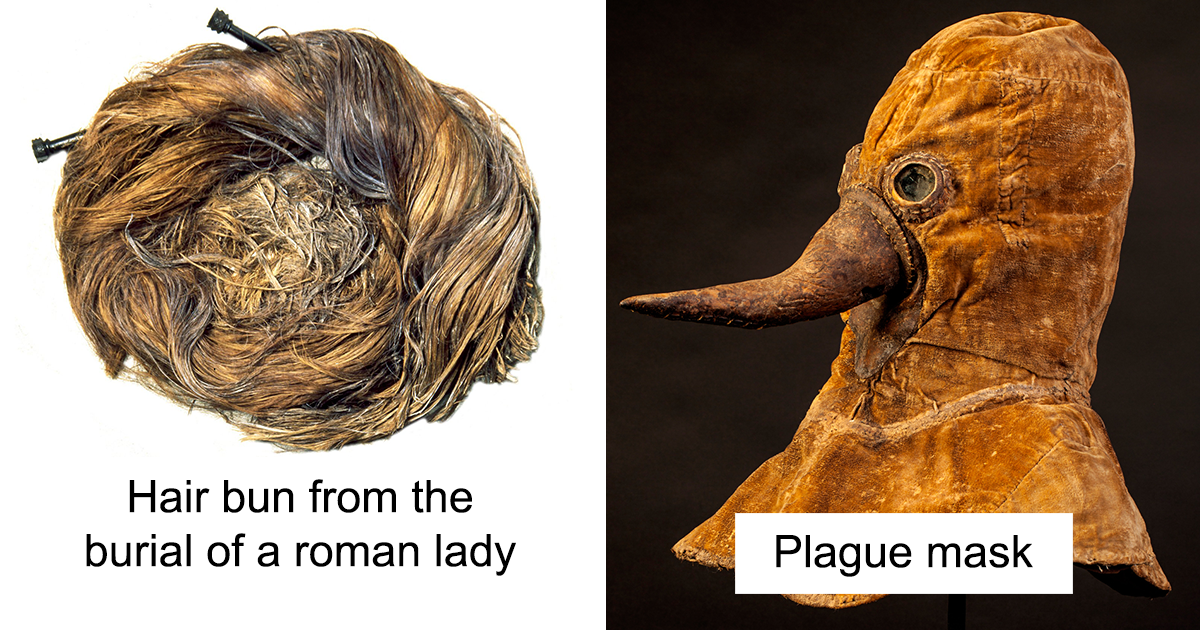 MUSEUMS ASSEMBLE! It's time for #CURATORBATTLE! 💥

Today's theme, chosen by you, is #CreepiestObject!

We're kicking things off with this 3rd/4th century hair bun from the burial of a #Roman lady, still with the jet pins in place...

CAN YOU BEAT IT? 💥 pic.twitter.com/ntPiXDuM6v

Thanks for thinking of us @HottyCouture and wow, will we be having nightmares tonight with all these #CreepiestObject|s ! Here is the one we just can't hide from you, one of our many creepy gems – our Plague Mask (1650/1750)! #curatorbattle pic.twitter.com/JrMjqAJSIM

Hold up! We’d be totally remiss if we didn’t jump on this #CreepiestObject train. We’re way a-head of you with the severed noggin of Peter Kurten, real-life #Vampire of Dusseldorf! 🧛🏽‍♂️ You can fang us later for the #nightmares. #CuratorBattle pic.twitter.com/7uritZMmIc

Can I offer up the 18th century diving suit from Raahe museum in Finland? pic.twitter.com/mP9FqB9uly

Bringin’ our A-game for this #CURATORBATTLE! What is it? Just a CURSED CHILDREN’S TOY that we found inside the walls of a 155-year-old mansion. We call it “Wheelie” - and it MOVES ON ITS OWN: Staff put it in one place and find it in another spot later on…. #Creepiestobject pic.twitter.com/FQzMzacr8a

As the only staff member at Red Lake Regional Heritage Centre (Ontario, Canada) with a Twitter, allow me to present creepy kids costumes for #CreepiestObject #CURATORBATTLE pic.twitter.com/u4LPWi0xjf

Imagine rummaging through an archive and unwrapping this 👇

These are hand-made models of figures playing cards and of gold miners hauling gold nuggets to the surface. BUT the figures are made from crab’s legs and claws… Typical Victorians, they loved weird/creepy stuff. #CreepiestObject pic.twitter.com/A5NHiPGnVh

Live from the Toy Museum of Penshurst Place, we present the Drinking Bear. Feed it a 2 pence piece and it'll pretend to drink from its cup as it stares into your soul. #CuratorBattle #CreepiestObject pic.twitter.com/ohNl2974UJ

Oldcroghan Man in @NMIreland - or what was left of him after a ritualistic sacrifice. #CURATORBATTLE

Side note - he was tortured before he died & among other things had his nipples cut off 😱 pic.twitter.com/RINuzsR7Qj

In a lot of ways, we wish we could un-see this entire thread. And we most definitely cannot beat the hair bun. But we'll just leave this here... pic.twitter.com/rVSPVETSSP

Our museum joined twitter solely to participate! This contribution is an early 19 c. wax child mannequin from Germany. It was stored face-down in a heated attic for many years, flattening its features into a snout. Please enjoy. #CreepiestObject #CURATORBATTLE pic.twitter.com/W3kitF7Utt

Turn the creep up to 💯 and check out this iron mask that was exhibited in the @TowerOfLondon as an Executioner's Mask. However, due to its grotesque appearance, we think it's more likely part of an elaborate scold’s bridle - an iron muzzle designed for public humiliation 😱 pic.twitter.com/1nG4mMZRex

We are not a museum, but we have so many creepy things in SOCH (a database for Swedish digital cultural heritage). One of my favourites: This cute little kitty cat (Speldosa, katt med harpa, 1906. Kulturen, CC BY-NC-ND). https://t.co/bSdazHIVX2 pic.twitter.com/ZDb2j9ug4v

Can I offer 'Tirpitz' here? Saved from drowning after her German ship sunk the South Pacific, served as a mascot on HMS Glasgow for the rest of the FWW, eventually auctioned off for pork (raising £1,785 for charity) in retirement. No wonder she looks like she's seen things. pic.twitter.com/gYdkvK60Yb

@RedHeadedAli how can we ignore such a call to arms?

This particular item has caused a few nightmares for our followers this week.

Sheep's heart stuck with pins and nails and strung on a loop of cord. Made in South Devon, circa 1911, "for breaking evil spells", @Pitt_Rivers collections #CreepiestObject #CuratorBattle pic.twitter.com/z5vdCFCU4S

We don't have a collection but our Digital Manager spotted this in the Tyrolean Folk Art Museum in Innsbruck.

This is one of my favourite objects from @HistEnvScot Collections - a painted whale eardrum. Fascinating and highly disturbing! #CreepiestObject #Curatorbattle

How could we have missed this??? We are properly ashamed of us! Here is one of the #CreepiestObject in our collection: a physicians stick used for a patient to bite on for the pain during a pre-anaesthesia & pre-antiseptic surgical procedure.Check those bite marks🤔#histmed #ouch pic.twitter.com/GitIlRxWOK

Ok so our entry for #creepiestobject is, of course, our mummified cat. It was found concealed in the floorboards above our State Room surrounded by a ring of hazelnut shells. The X-ray below was taken at a local vets (no one else had a machine big enough!) #CuratorBattle pic.twitter.com/O9nUoBp6gC

I used to avoid walking past this when it was on display at the @sciencemuseum
You can't unsee it.#CURATORBATTLE #CreepiestObject pic.twitter.com/MEzTBpQbBn

Um, here's a fetus doll to train midwives and medical students but honestly, we could carry on posting forever when it comes to the #CreepiestObject... pic.twitter.com/xAdH4gwmOp