Posted by Zainab Pervez in Sports On 27th November 2020
ADVERTISEMENT

Football legend Diego Maradona, one of the greatest players of all time, has died at the age of 60. The former Argentina attacking midfielder and manager suffered a heart attack at his Buenos Aires home. He had successful surgery on a brain blood clot earlier in November and was to be treated for alcohol dependency.

Football legend Diego Maradona, the former Argentina attacking midfielder and manager, and one of the greatest players of all time, has died at the age of 60. He suffered a heart attack at his Buenos Aires home.

Maradona has left five children by four different women, including his wife of 20 years Claudia Villafane.

Maradona won the World Cup for Argentina in 1986, beating England in the quarter final with the infamous 'Hand of God' goal and another - 'Goal of the Century.' 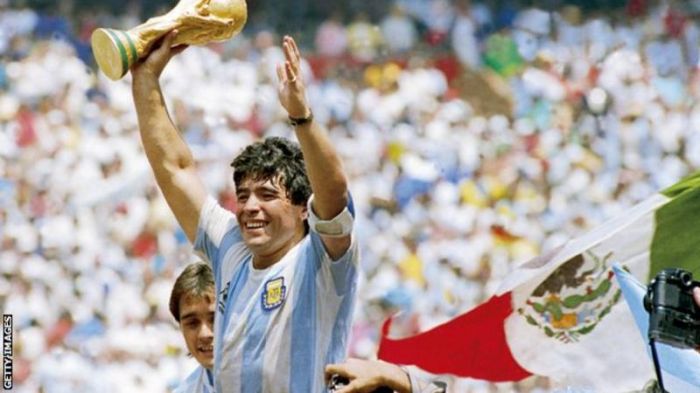 Maradona's death comes just three weeks after he underwent surgery on a blood clot in his brain, and less than a month after he turned 60. On Wednesday morning, Maradona had come down for breakfast looking pale and complaining that he felt cold. 'Me siento mal,' he told his nephew - 'I feel sick' - before returning to bed in the Buenos Aires mansion. Shortly before noon a nurse discovered Maradona and phoned for help but he was dead before paramedics could arrive.

Paramedics made an unsuccessful attempt to revive him after they arrived at the rented house in the gated residential estate of San Andres north of Buenos Aires he had moved to after leaving hospital following his operation on November 11. Prosecution chief John Broyad, speaking outside San Andres as the retired footballer's body was taken to a nearby morgue for an autopsy, said: 'Diego Armando Maradona died around 12pm local time. The forensic police began their work at 4pm. No signs of any criminality or violence have been detected. The autopsy is being carried out to determine beyond any doubt the cause of death but we can say at this stage that everything is pointing to natural causes.' 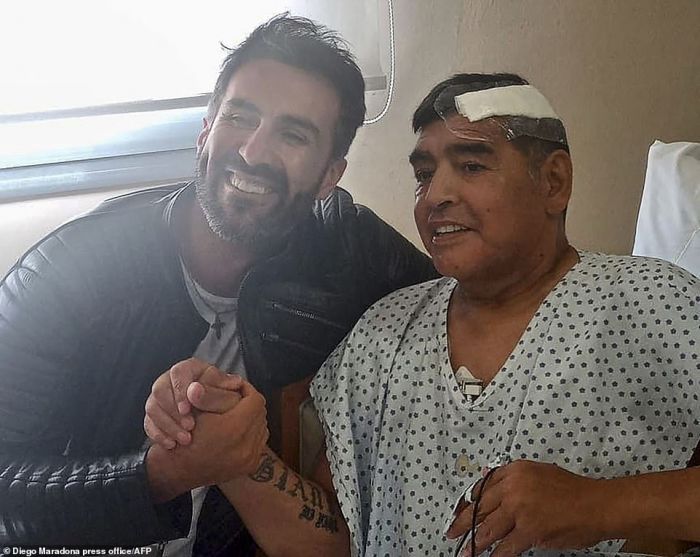 Maradona's Hand of God was responsible for England's elimination from the 1986 World Cup.

Maradona was captain when Argentina won the 1986 World Cup, scoring the famous 'Hand of God' goal against England in the quarter-finals.

Maradona played for Barcelona and Napoli during his club career, winning two Serie A titles with the Italian side. He started his career with Argentinos Juniors, also playing for Sevilla, and Boca Juniors, and Newell's Old Boys in his homeland.

He scored 34 goals in 91 appearances for Argentina, representing them in four World Cups. Maradona led his country to 1990 final in Italy, where they were beaten by West Germany, before captaining them again in the United States in 1994, but was sent home after failing a drug test for ephedrine.

During the second half of his career, Maradona struggled with cocaine addiction and was banned for 15 months after testing positive for the drug in 1991. He retired from professional football in 1997, on his 37th birthday, during his second stint at Argentine giants Boca Juniors.

Having briefly managed two sides in Argentina during his playing career, Maradona was appointed head coach of the national team in 2008 and left after the 2010 World Cup, where his side was beaten by Germany in the quarter-finals. He subsequently managed teams in the United Arab Emirates and Mexico and was in charge of Gimnasia y Esgrima in Argentina's top flight at the time of his death. 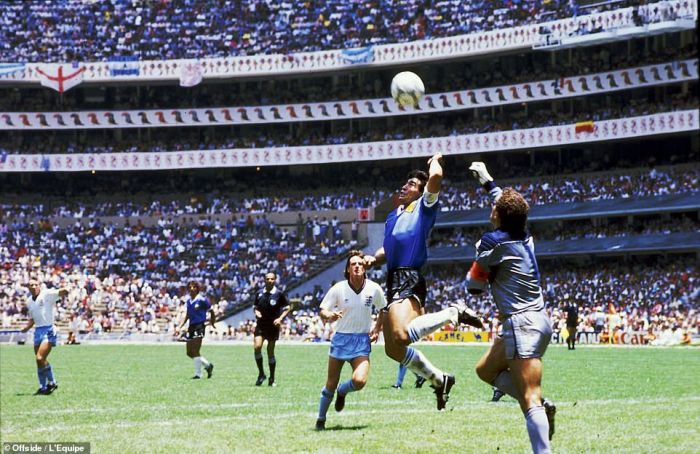 Football legend Diego Maradona has been buried in a private ceremony

Only around two dozen relatives and close friends attended the final ceremony on Thursday. Maradona's coffin - draped in Argentina's national flag and football shirt, bearing his trademark number 10 on the back - was on public display at the presidential palace on Thursday. He was taken to the Bella Vista cemetery on the outskirts of the capital - where his parents are buried.

President Alberto Fernandez has declared three days of national mourning and earlier visited the casket. 'He was someone who touched the sky with his hands but never took his feet off the ground,' the president said. 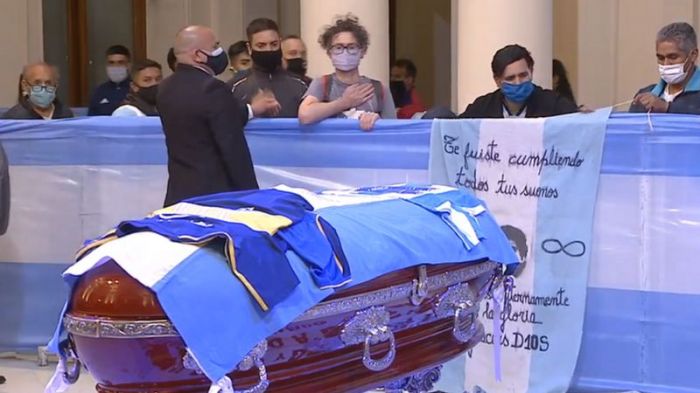 Huge crowds turned out to pay their respect

Earlier huge crowds turned out to pay their respects, with many weeping, blowing kisses, and praying as they filed past his coffin. By mid-afternoon queues stretched back for more than a kilometer, and police clashed with mourners as they tried to close off the palace in anticipation of the wake. There were reports of tear gas and rubber bullets being used as officers in riot gear struggled to hold back the crowd. Authorities were eventually forced to stop public viewing of the coffin to keep the peace.

After news of his death emerged, at 22:00 on Wednesday (01:00 GMT) - an hour chosen to match the number on his shirt - stadiums across Argentina switched on their floodlights to honor his memory. Fans flocked to La Bombonera, Boca Juniors' stadium in Buenos Aires, where many were in tears. 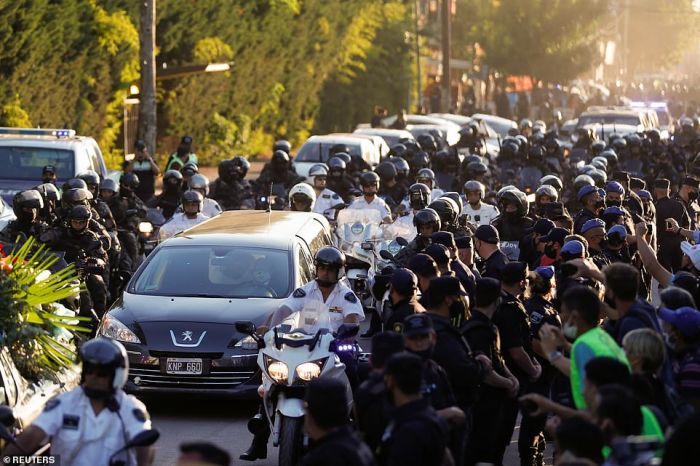 Tributes pour in from all over the world

Juventus and Portugal forward Cristiano Ronaldo said: "Today I bid farewell to a friend and the world bids farewell to an eternal genius. One of the best of all time. An unparalleled magician. He leaves too soon, but leaves a legacy without limits and a void that will never be filled. Rest in peace, ace. You will never be forgotten."

"A very sad day for all Argentines and football," said Messi. "He leaves us but does not leave, because Diego is eternal. I keep all the beautiful moments lived with him and I send my condolences to all his family and friends."

Maradona's former club, Napoli, paid tribute. He played for the club between 1984 and 1991, making 188 appearances. Fans flocked to the Napoli stadium to pay their respects chanting "Diego, Diego!".

Always in our hearts 💙