Posted by Muk Khatri in Amazing On 31st January 2018
ADVERTISEMENT

If you spend enough time hiking or camping in the woods, you’ll realize that there’s not much going on. Sure, you can spot some pretty interesting wildlife scurrying around, but beyond that, it’s a pretty standard scene: trees, rocks, bugs, a wayward squirrel or two, and not much else. A strange, mysterious cabin has been found in Arcata Community Forest Park. 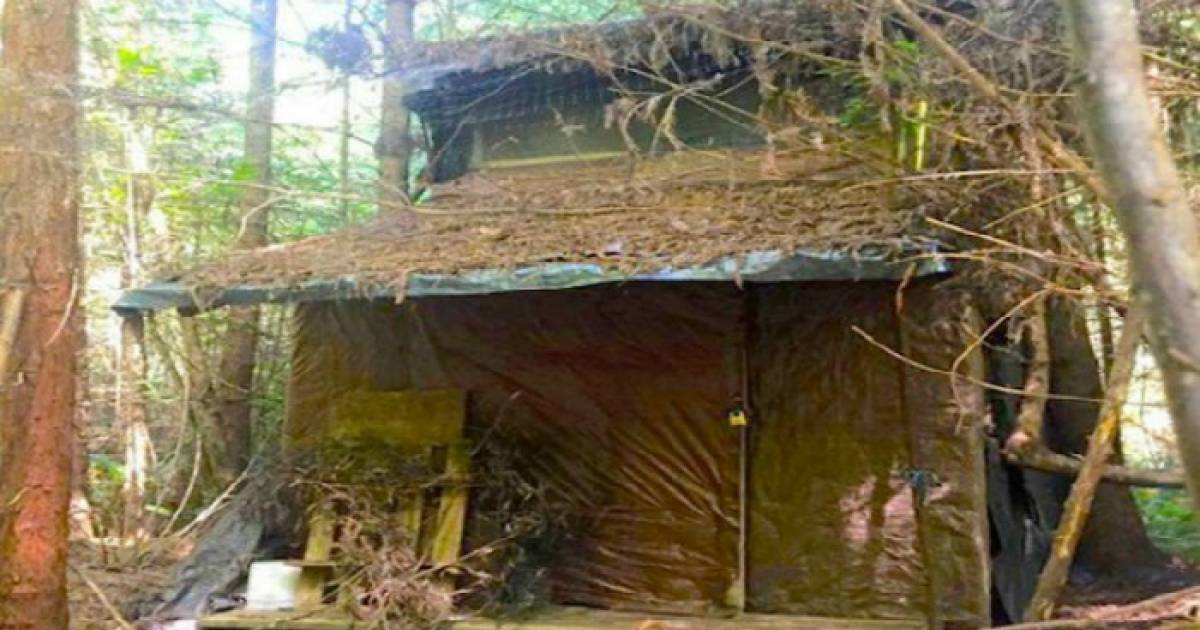 Mark Andre of Arcata, California, has devoted his career to exploring the woods in northern California. As the town’s environmental services director, it was his job to spend time out in the wilderness. He knew the area like the back of his hand, or so he thought. 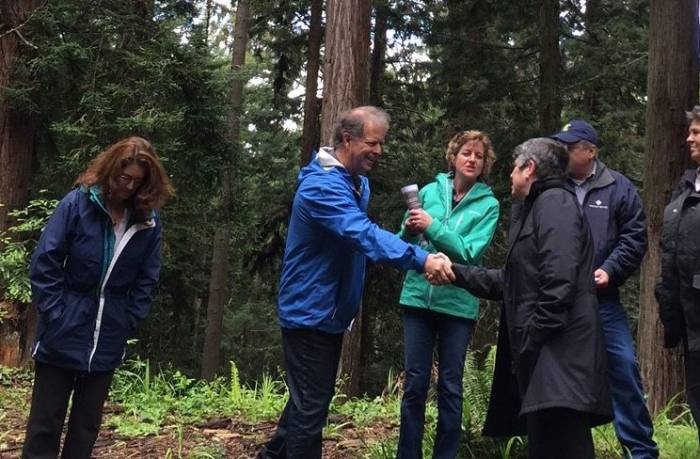 Mark Andre stumbled upon something he’d never seen before. He’d been marking trees to be harvested in the Arcata Community Forest when he realized something just wasn’t quite right. When he stepped closer to investigate, his jaw dropped. He saw a cabin. And not the usual ramshackle, trash-strewn heap of debris, but a proper house, constructed, if not for the ages, for more than just a brief stay. 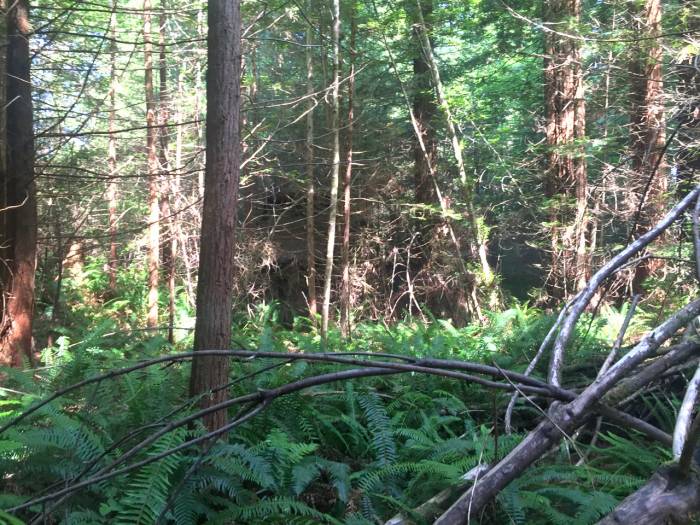 The cabin was situated in one of the most remote areas of the Arcata Forest. Mark hadn’t explored this area since about 1985, back when was still just a forest technician. Obviously, whoever built this wasn’t expecting to be discovered. 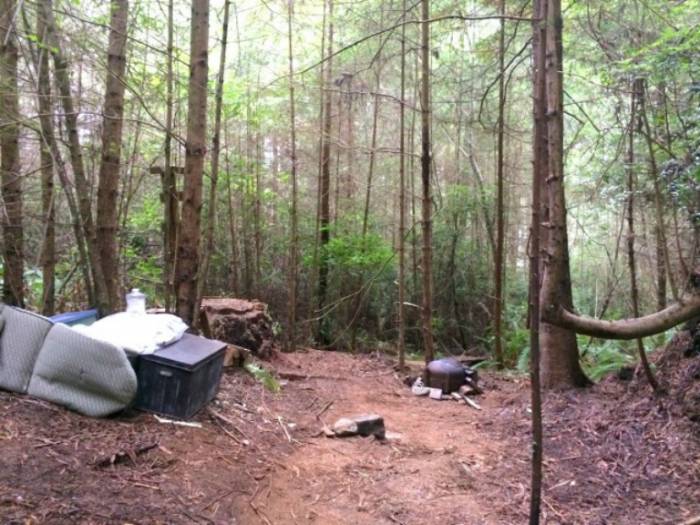 The well build cabin was 8 by 12 feet and 15 or so feet high, features a concrete block foundation, stout frame, peaked roof, small porch with wooden awning, multiple windows and walls of plywood covered on the outside with brown tarps, black plastic sheeting and lots of concealing forest duff. 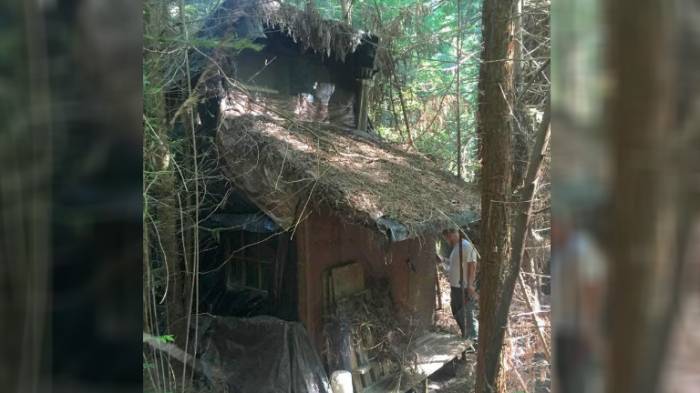 Andre said,"I didn’t see it until I was 12 feet from it. It’s in the perfect out-of-the-way spot where it wouldn’t be detected."

No trails lead to the small home, and the faintest of footpaths in the immediate area trail off to none of the environmental abuse normally associated with forest campsites – no trash piles, no discarded clothing, no open-air latrine strewn with toilet paper; nothing to show anything but scrupulous regard for the natural surroundings. 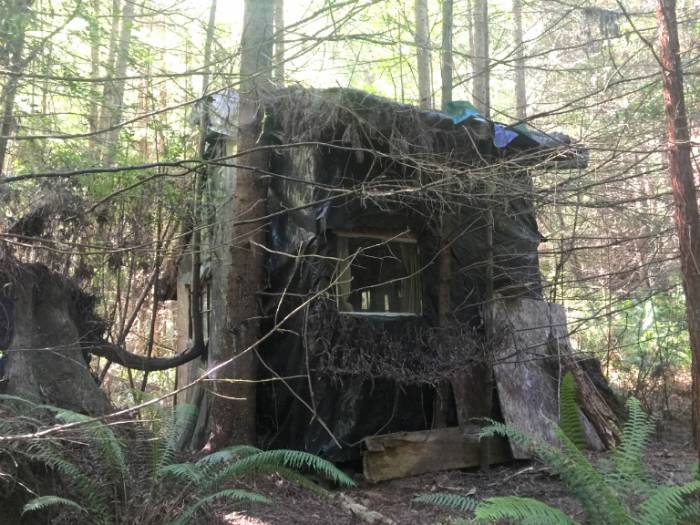 Mark decided to call forest technicians Javier Nogueira and Nick Manfredonia for help. Along with park ranger Heidi Groszmann, they trekked back to the site to explore the inside. When they finally cut the padlock and flung open the doors, they weren’t sure what or who they’d find inside. 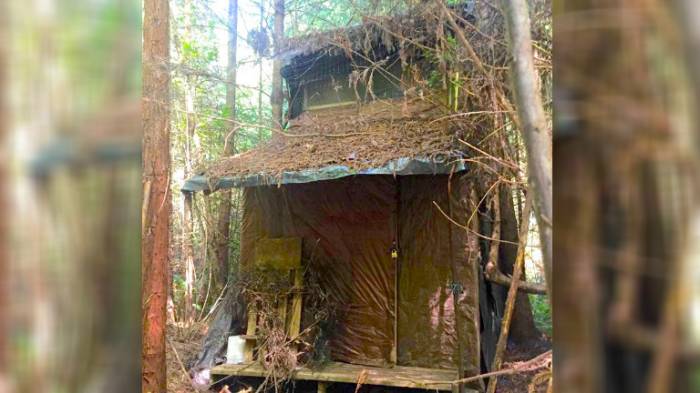 #7 Entry in the cabin

The ranger entered the cabin with gun drawn, announcing "Arcata Police!" But no one was inside, and she began to inspect the quarters for clues to the user’s identity. 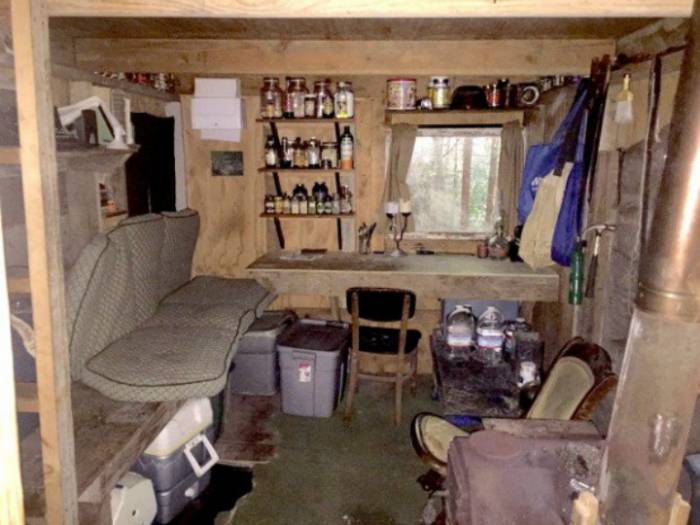 The group was quick to note the tidily kept quarters. In the living room and kitchen area, housekeeping supplies and assorted cans of food sat on shelves built into the wall. In many ways, everything seemed ordinary. 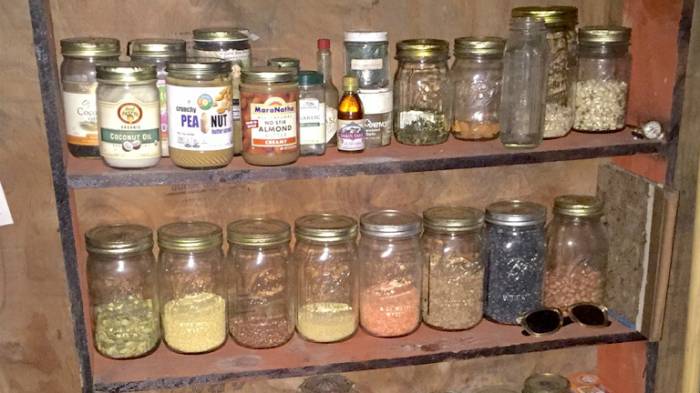 Beside a rocking chair, there was a coffee table with a tea kettle sitting on it. Directly across from the chair was a pot-bellied stove. Whoever had been living here wasn’t exactly struggling out in the wilderness. 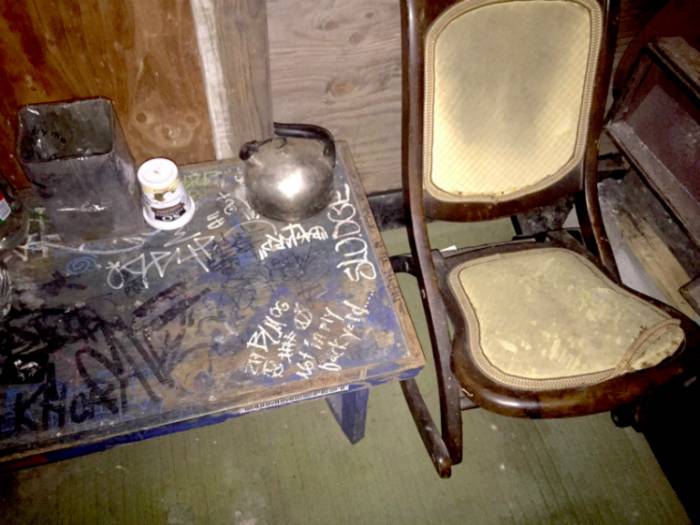 In another corner of the cabin was a small bookshelf constructed on a wall. It was lined with various titles, including Catch Me If You Can and Medicinal Plants of the Pacific West. Soon, the rangers began to suspect it was an older person who’d been living there. 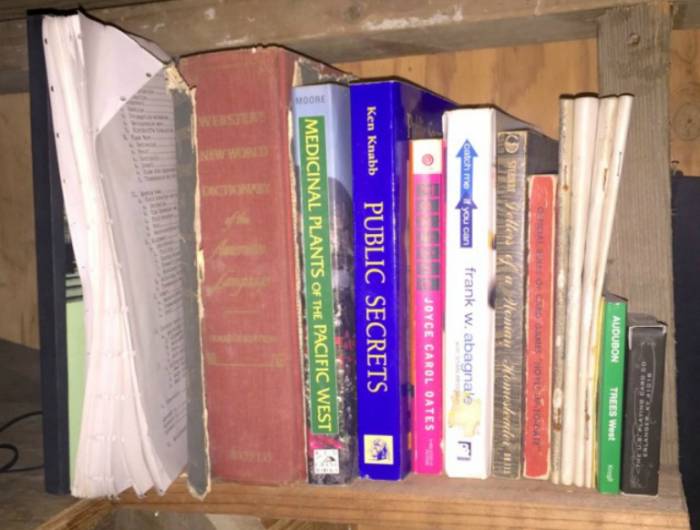 #11 Storage bins and Stack of tapes

Storage bins contain fabric, camping equipment and other long-term supplies. Thick curtains and small wooden panels made to fit window frames keep telltale light from escaping. Other items, like a stack of tapes, lent credence to the search party’s suspicions. Still, they continued to search for other clues that might help them determine just who it was that called this mysterious place home. 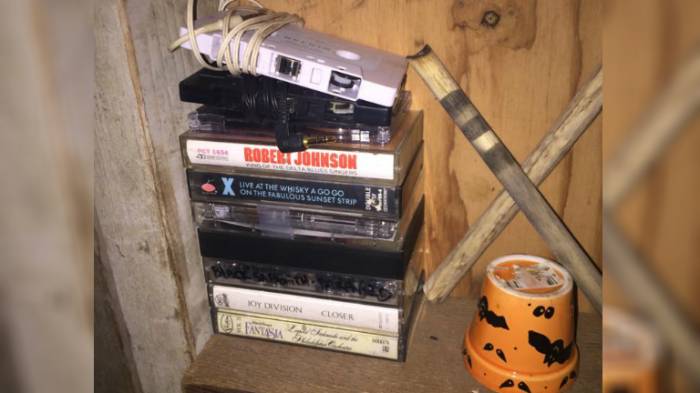 One slip of paper lists species of plants and trees found in the area, while another "Things To Do And Get" list includes tasks, some lined out, like "Build Bench" and "Big Spoon." A few entries bear dates, presumably when the item was accomplished, the oldest being "Get tongs 1/22/11." 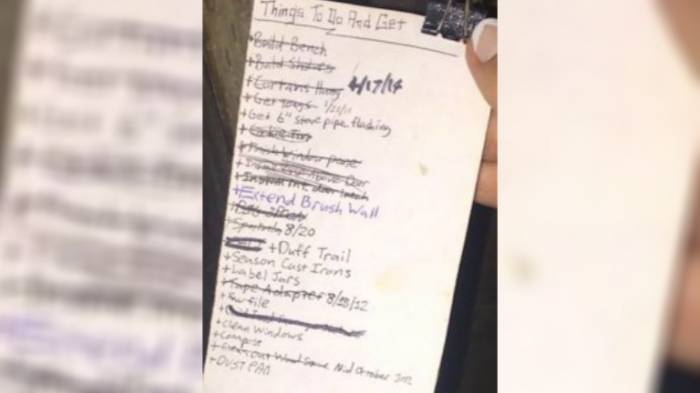 Near the stove, the group also found a copy of nearby Humboldt State University’s The Lumberjack newspaper, dated March 25, 2015. Between the list and the paper, the team started to piece together a timeline for when the cabin’s owner might have lived there. 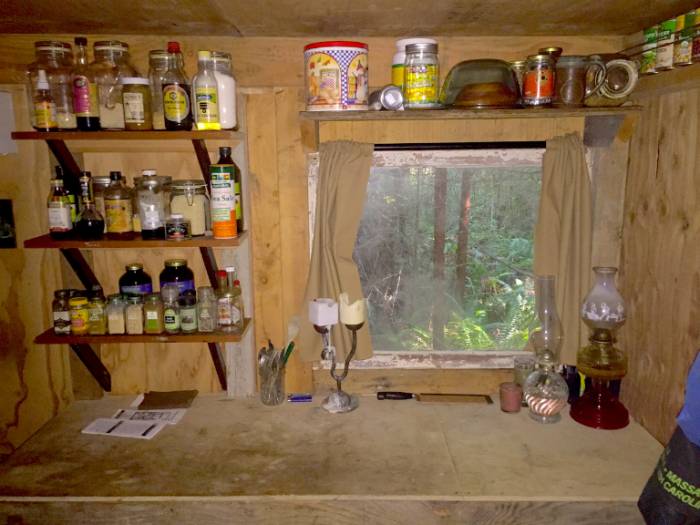 Little identifying information was found. A shipping label and a California driver’s license bore two different names, but they may have been random objects found in the woods by the resident. They could only assume the person was visiting seasonally. 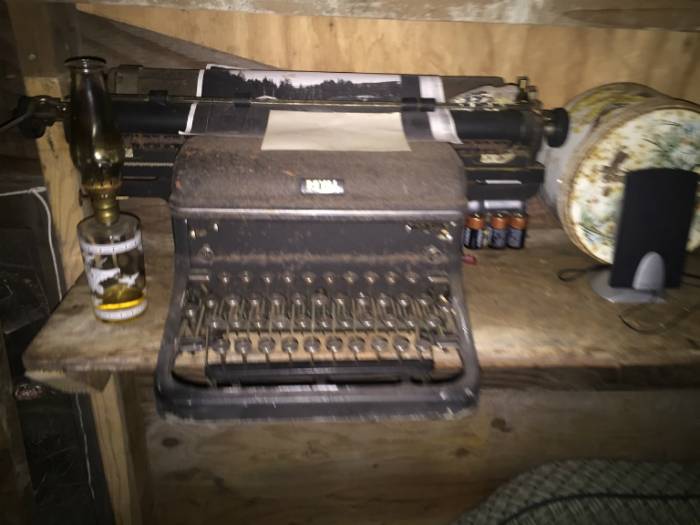 Since camping on public property is illegal even if the person who’s doing it is respectful of the land—and the cabin existed on a nature refuge, the crew left an eviction notice for the inhabitant. From there, things really got strange.

When authorities returned to the cabin site at a later date, they found it had been totally deconstructed! The only trace of it was a charcoal "squatters symbol" where the cabin once sat.

Michael McDowall, the natural resources technician for the Environmental Services Department said,"That’s the cleanest camp cleanup I’ve ever seen. There wasn’t a nail, not even a gum wrapper left behind." 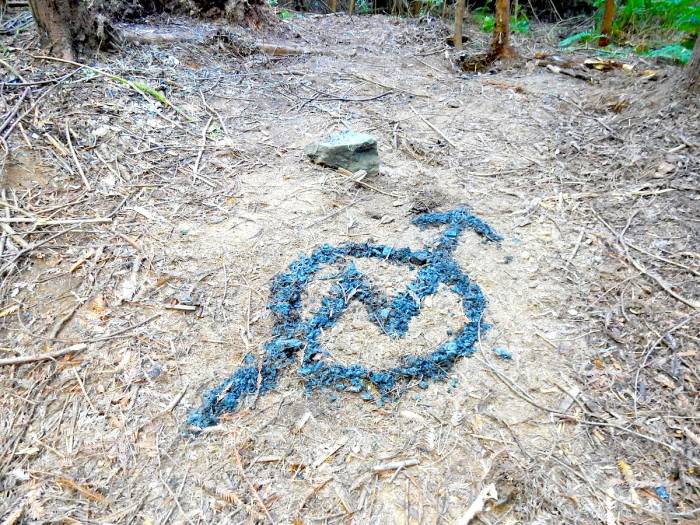 The area, last logged in 1984, is set for a harvest next month, so the structure will have to be removed. If the responsible individual can’t be located beforehand, their possessions will be packed out and stored for later retrieval.

Whoever built and lived in that cabin had some serious dedication. It makes you wonder if they’ll ever be found.