Futuristic Technology That Is Spicing Up Your Love Life

Posted by Arsalan Ahmed in Science and Technology
ADVERTISEMENT

Are you ready to read about some of the weirdest and most unexpected twists that technology is bringing to the bedroom? As you’re going to learn, there are definitely some external devices made for intimacy that will make you feel like you’re living in the future. Ready to spice things up while also learning about just how far the sex industry has advanced in terms of technology? Look no further! 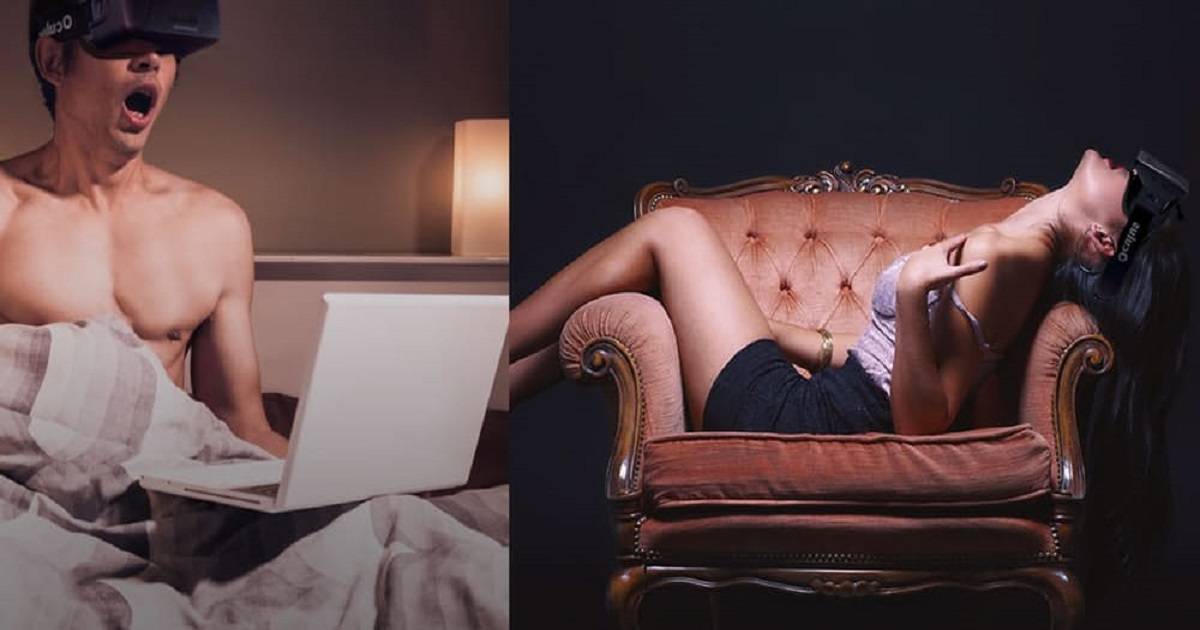 While most equipment in the bedroom does not play a factor in the bedroom when the intercourse is occurring, you can erase those notions with the We-Vibe 4 Plus. Already one of the most popular couples tools in the world, it's getting a huge technological update with the 4th edition.

Now with "We-Connect", you can download an app that will allow you to send custom vibrations to your partner. Also included in the app is the ability to use voice chat as well as video. While the original model will ship with 5 different vibrations, updating to the technologically more advanced version adds another 6 motions to the bounce (including one hilariously called cha-cha-cha).

At the Cosmo Sex Toy Awards, the We-Vibe 4 Plus 4 was voted as the best overall toy, their We-Vibe Touch was awarded for best external vibrations and the We-Vibe itself was the best toy for solo play.

It is clear that they know what they're doing! 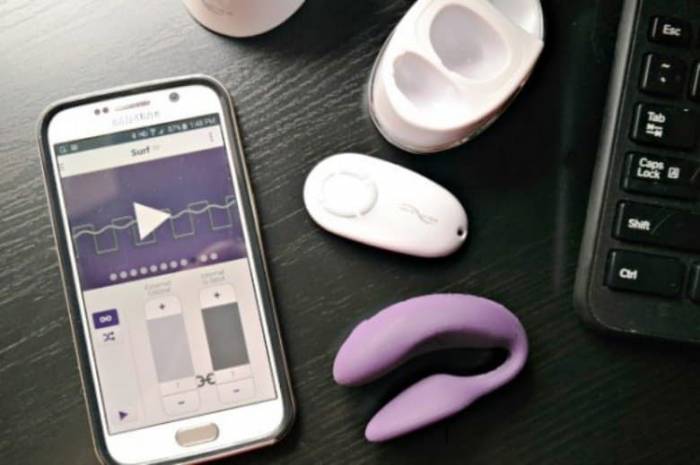 Do you want the feeling of electricity in your hands? Why wouldn't you! So why not take a good hard look at the Hello-Touch X, a new toy that is looking to help make electro-stimulation in the bedroom easier than ever before. By slipping the two pads over your fingertips, you'll be given the option to either deliver a vibration or an electric shock.

Electric stimulation is known to increase blood flow, stimulate nerves and have other less safe for work benefits that play a role in creating a great experience in bed. It is also worth noting that it uses a pulse type waveform, and not the typical type of AC/DC electricity that you may be thinking of.

The device comes with 10 power levels and 6 different pulsation modes to go through. 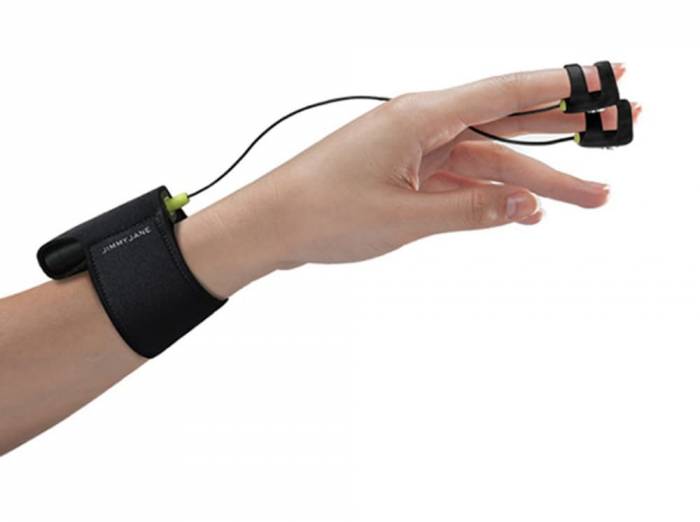 While the reviews for the toy itself are mixed (plus it's $210!), it is a huge sign of where the future of technology may be going. Let's just hope you don't end up like that episode of Friends when Rachel and Ross watch themselves awkwardly doing it on camera! 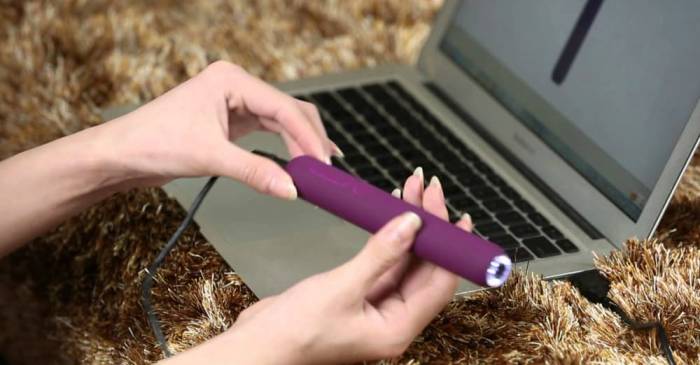 While that's the bread and butter of the app, if you're using it with a partner they are also able to send you vibration patterns using an interactive touch pad.

Last but not least, you're able to play your favorite music and the beat of the music will be reflected in the vibrations that you feel. 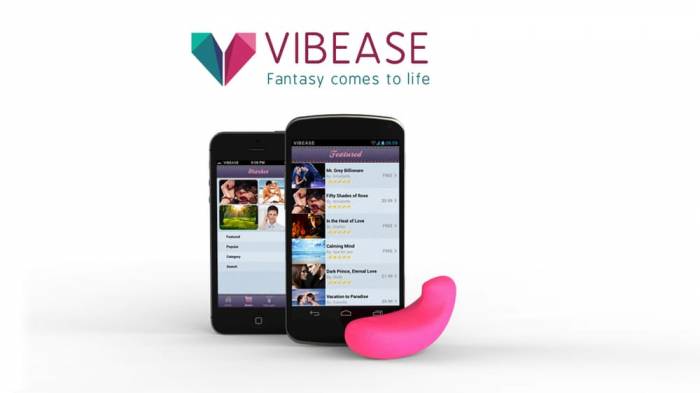 You are also able to download different vibration patterns online that you can then send to one another. Like many of the devices on here, the device will also sync up with music. 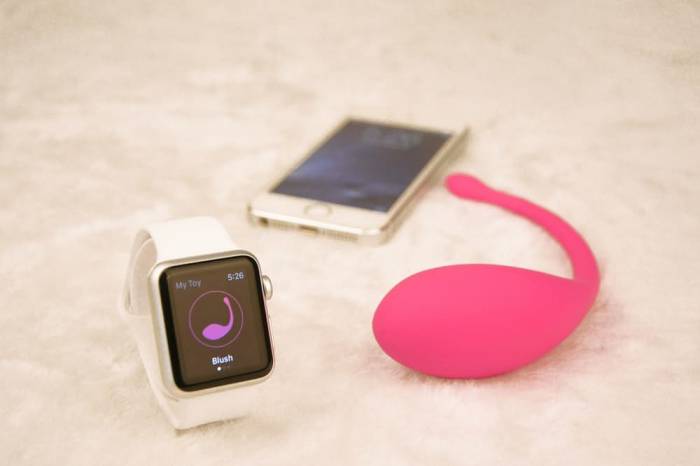 When it comes to toys on this list, a lot may improve your sex life, but for some men, this next toy may be a lifesaver. That's because "Pulse" is the one of the world's first vibrators to operate by using high-amplitude oscillations, as opposed to low-amplitude vibrations. It may sound like fancy scientist talk, but what it means is that if you're a gentleman that is suffering from erectile dysfunction, you're still able to use and enjoy the product. The product also promises a completely different experience whether you choose to use lubricant or not, which adds more variety to the overall time you spend with Palmela Handerson.

The company has also recently come out with the Pulse 2 Duo which as you can guess, is meant for couple use.

It's the future, why should you have to do any work when you get home and decide it's time to try and hold your sausage hostage. Especially when the tagline for the Autoblow 2 was literally "The Original Massage Chair For Your Penis." Instead of relying on let's say a manual transmission, this instead is essentially a robotic spring that will move the device up and down at the speed of your choosing.

Once charged, lean back and the device will stimulate what they promise is the feeling of oral loving. The device also ships in a variety of sizes, allowing you to hopefully feel confident in the product that you're purchasing. There aren't many male toys that promise to be hands-free, but the AutoBlow 2 is representative of a new style of intimate toys that will be coming your way in the near future. 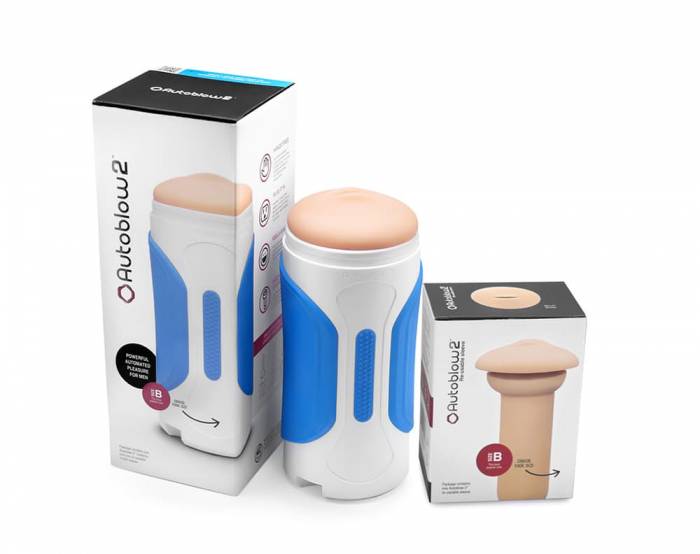 Do you love video games? Do you own a virtual reality set? Do you have an affinity for adult entertainment? Then we've got the perfect thing for you. The VirtuaDolls device is not only meant for self-pleasure but also ships with the video game Girls of Arcadia. It promises to be the first step into adult entertainment virtual reality gaming in which gamers strap on their VR headset and go to work trying to save a damsel in distress. If you succeed, you can imagine what the game rewards you with. The toy that comes with the game to help aid in your travels includes a programmable pressure gripper, as well as the option to vary any potential stroking motions.

Don't want to deal with having to save the girl? The game also offers a "sim mode" in which you can choose a woman and stimulate intercourse with her. 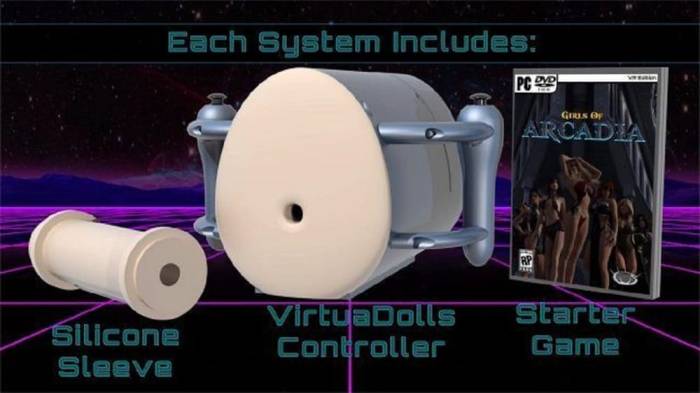 While there are plenty of toys on this list to help spice up your bedroom, nothing will go anywhere if you don't feel comfortable talking to your partner. Which is why the first app we'll delve into is Kindu, whose entire purpose is allowing partners to discuss their kinks.

How it works is that you and your partner will both create an account and pair with one another. You'll then be given over 100 suggestions that you can confidentially say yes, no or maybe to. As well as this, you can suggest ideas and send them to your partner.

It's not a perfect system, as if you said yes or maybe and the idea isn't a "match" you'll know they turned it down, but it's definitely a great starting point. 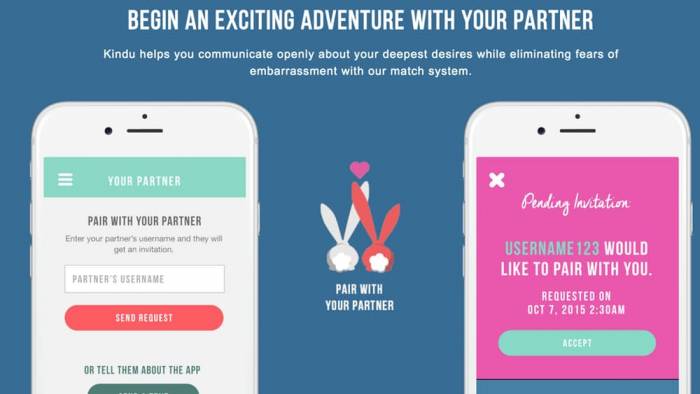 There aren't many adults out there that have not at least heard of the Kama Sutra. But what may conjure up images of an old dusty book can be washed away quickly when you download the iKamasutra app. Available for $3.99, the app allows you to quickly search through the 230 different positions. You're also able to track your progress through the app and it even gives you cute little date ideas!

Perhaps the coolest feature is the fact that the app will list out some of the biggest Hollywood love scenes of all time so that you can try and re-enact them at home. Nothing says a nice date night like watching people make love on screen and saying "Whoa, we're so much hotter than them!" 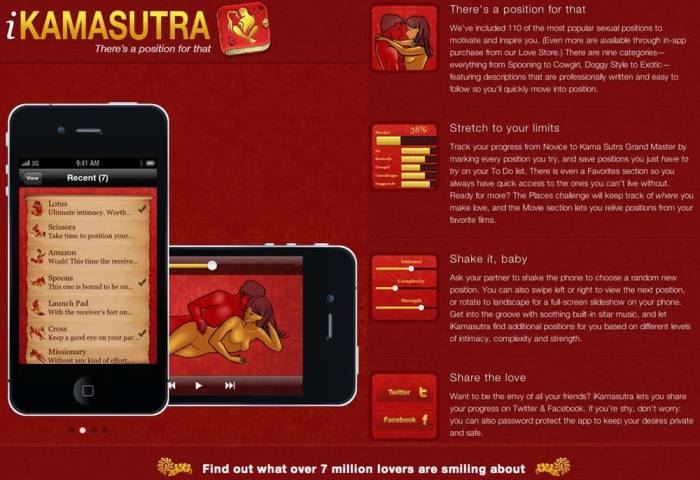 Is one of your biggest fetishes to play some board games in the bedroom? Of course it is! Which is why Bliss is a fantastic app that has you covered in just that area. The game allows you and your partner to write which things you have at your disposal, as well as input what you're wearing as you and your partner roll the device and move around the board. Once you land on a spot, you're given one of up to 700 different sexy suggestions that you can use to help create a memorable night. It promises to be the world's first intelligent romantic game, as it will also adjust what suggestion it gives you based on how long you are playing.

By having the slow buildup of rolling dice and going through the game, the app promises to enhance romance and intimacy, as opposed to just blatant sexuality. 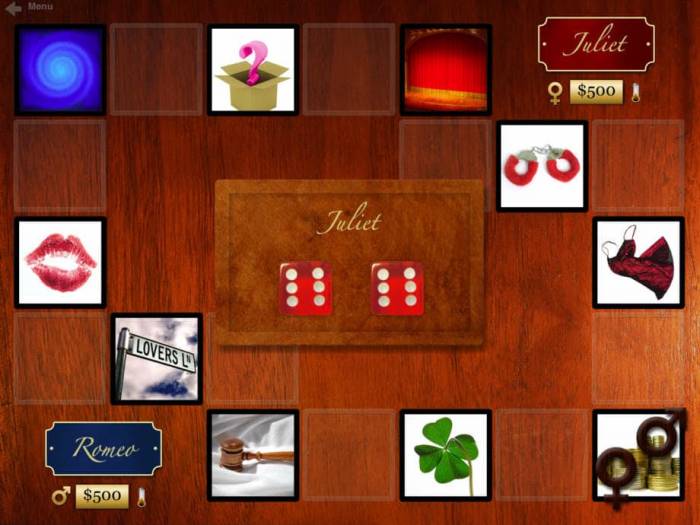 Do you want the feeling of a girlfriend, without actually having a girlfriend? Or maybe you want one, but realize that it's not as easy as just wanting it? An adult service company AliceX was launched this past September and promises users the "virtual girlfriend experience."

The site consists of models that will pretend to be your girlfriend, provided you pay the appropriate price. You can imagine that there would also be sexual implications of having them be your "girlfriend."

Having cam models is nothing new, but this service is also run entirely through virtual reality, which the company hopes will further the connection. iPhone users may be a bit bummed out to know that it isn't available on the App Store yet, whereas Android users should be able to track it down. If you're still interested, it does offer a browser experience as well. 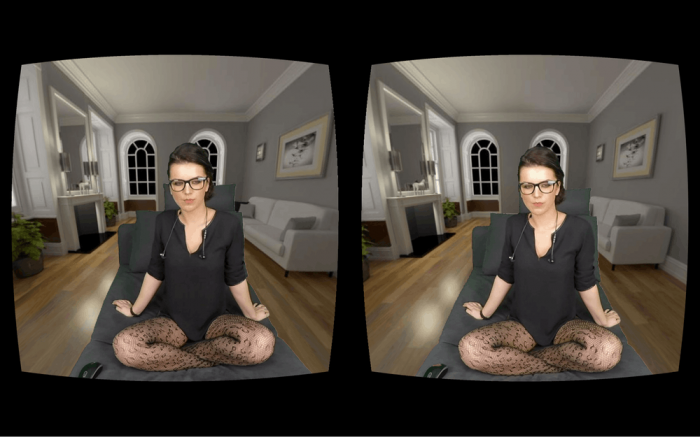 We're going to be the first to admit that sex dolls are definitely not for everyone. But those who are into them have helped make RealDoll an incredibly successful company, and you may be ecstatic at what they've got coming next. After all, what's love if not being able to also hear your doll talk back?

Starting in 2017, the product will include enough artificial intelligence to help create both a physical and emotional bond between the man and doll. When you receive the doll you will be given her personality along with an app to help create the perfect lover (I assure you, these are the company's words, not mine!).

As for what is even further down the line, Matt McMullen (founder of RealDolls) is hoping to create full body animated sexbots by 2020. 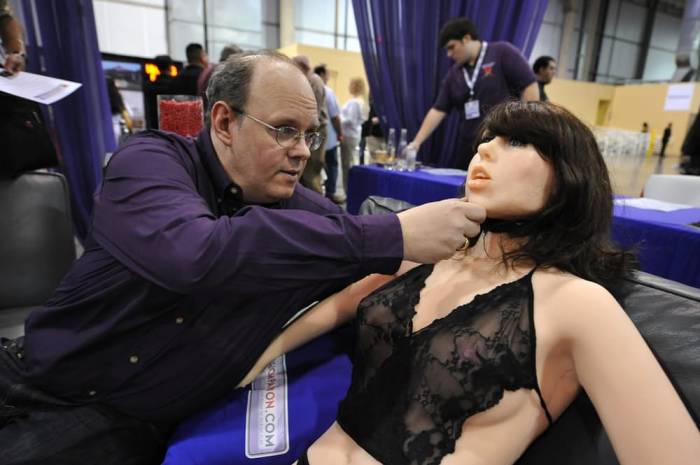 I bet that wasn't a heading you thought you would read today, but in the near future, it's something that you very well may have in your home. The idea of someone being able to control your body over the internet is a theme that many sex companies are working with, and it just turns out it may even work as a gel.

While there is no toy out there that is buyable with this technology, companies are starting to work on a toy that reportedly will "Use liquid gel filled with microscopic robots that each partner would apply to themselves. The robots would then respond to signals sent over the internet."

The service would also recommend using a form of virtual reality so that you can really get that immersive feeling. 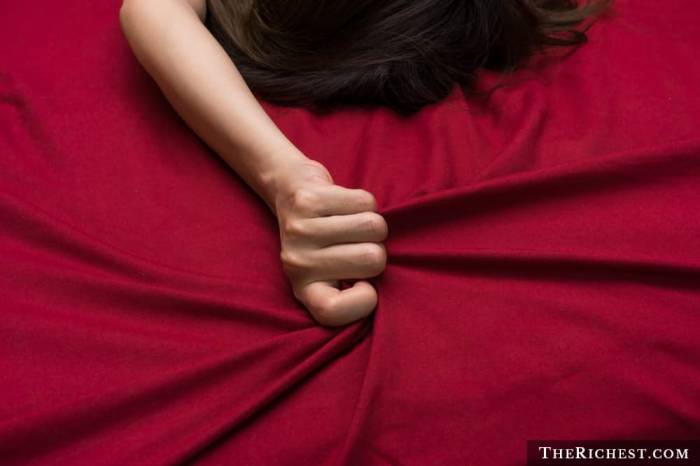 There are a few different styles of virtual reality adult entertainment, including "Virtual Real" in which you can select if you're a male or female and then partake in the activities.

Other companies are coming out with things like "Gold Club San Francisco" which promises users their first Virtual Reality Strip Club Experience.

One thing is clear, virtual reality and its role in adult entertainment is only going to keep getting bigger in the near future. 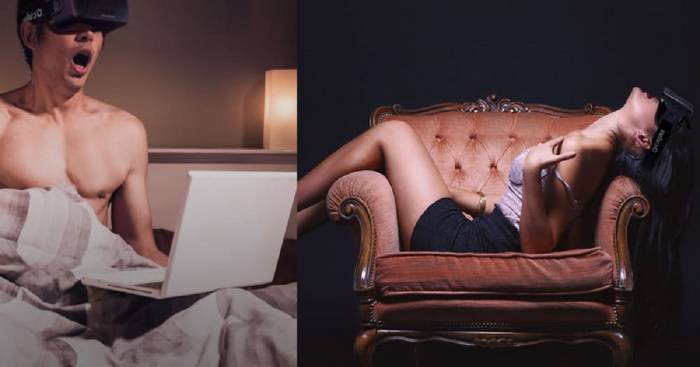