Generation Z Now Has Come Up With A Word For Millennials Who Try Too Hard: Cheugy

Posted by Sama in Cringey On 15th May 2021
ADVERTISEMENT

Generation Z has coined a new fun word to refers to those millennials who basically try too hard: cheugy. According to the girl who originally came up with this word, the term can refer to all things including graphic t-shirts and hats, Herbal Essence shampoo and conditioner, and Instagram phrases such as “life’s a beach” and “thank you, next.” Not only this but the word can apply to any person irrespective of their gender and age. 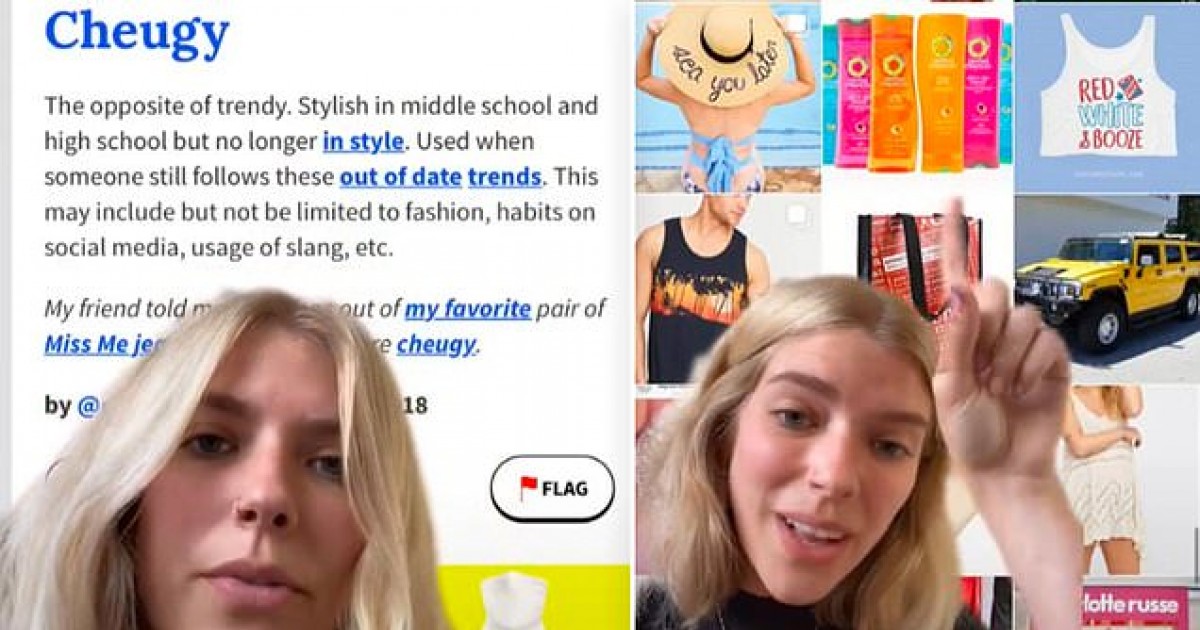 Generation Z of TikTok have coined a new term to refer to millennials who try too hard -“cheugy.”

The new term is created by a 23-year old software developer in Los Angeles, Gaby Rasson. The unique word refers to those people who try too hard. The word was originally created in 2013 but mow has gained new popularity among the TikTok generation.

“OK TikTok, I have a new word for you that my friends and I use that you clearly are all in need of,” Hallie Cain, a 24-year-old copywriter in Los Angeles, said in a TikTok posted on March 30.

How does one define "cheugy"? It’s not embarrassing or even always negative. “One of my friends said lasagna is cheugy." https://t.co/4g0ErtDY1i pic.twitter.com/nGAkOI7UeE

In one of her viral videos, Cain shares all the things that would be classified as being cheugy, which includes graphic shirts, hats, herbal essence shampoos, conditioners as well as Instagram phrases such as “life’s a beach” and “thank you, next.”

the only thing I have to say about "cheugy" is that I think this quote should be framed and hung in the Louvre https://t.co/JAkh4XlYax pic.twitter.com/TzvittbFbf

Not only this but Golden Goose sneakers, Gucci belts with a large double ‘G’ logo, and being really into sneaker culture can also be considered cheugy.

However, there is a list of items that are excluded from the category include thrifting, handmade products, Levi’s jeans, Birkenstocks, and home decor not found at Target.

feels sort of bleak that so much of kids describing in-group/out-group aesthetics is now just a perpetual re-sorting of a list of Relevant Brands. had already started when I was a teen but we’ve got to be nearing the logical extreme https://t.co/Jl7vS9iRe2

According to the New York Times, despite the term originally coined to refer to the millennials but in fashion can be applied to any gender and any age.

ok but cheugy seems to be 2014 pinterest which i thought we had all moved past? i think of the millenial girlboss aesthetic as this pic.twitter.com/fFFmjlFWgv

After Cain's post went viral on social media, many people took to social media to share their views on this new fun word.

Discussing the difference between mayo, vanilla, crunchy, and cheugy white people with the group chat pic.twitter.com/V9QAEbfYBN

“Everyone can be cheugy,” said Abby Siegel, 23, a producer and former student at the University of Colorado, Boulder. “Everyone has something cheugy in their closet. We didn’t intend for it to be a mean thing. Some people have claimed that it is. It’s just a fun word we used as a group of friends that somehow resonated with a bunch of people.”

lmao the girl who coined "cheugy" is a sorority girl from Beverly Hills, how much did Mommy and Daddy pay the New York Times to try and make cheugy happen

Siegel supposedly attended the same summer camp as Rasson, which is where she initially learned the phase.

Though the word cheugy is literally a synonym of 'uncool,' Cain also mentioned that there are some fashion trends that make a comeback in style, and those who fit the description might later grow out of it.

Gonna help kill off "cheugy" by using it before my 11 year old does, thus making it cheugy to say cheugy. pic.twitter.com/IJkXtXy4kN