Girl Gets Giant Tattoo Of Boyfriend's Name On Her Back. He Breaks Up A Week Later.

Nothing will prepare you for the size of the tattoo this girl got for her ex-boyfriend who dumped her a week after she got it. The internet is shook and dying of second-hand embarrassment.

What’s worse than getting a tattoo you regret? It’s getting the name of an ex you regret, tattooed on your entire back.

21-year-old Ashlyn Grace was young and in love and thought the best way to communicate that feeling was to get a back tattoo with the name of their boyfriend.

Their boyfriend ‘Alexander’ made a swift exit (1 week) after they got the tattoo. It is unclear whether the break was tattoo related.

Whatever the reason, Ashlyn was now left with an Alexander tattoo sprawled across their back, for the foreseeable future.

They started the video by saying, "Don't be alarmed, it's a little big. I don't think there's a smart way to do this but, yep, I understood the assignment."

They have since made follow-up videos addressing the tattoo since people are still quite unable to wrap their heads around the situation. 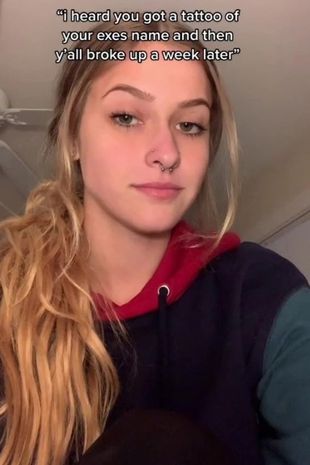 They also said that it’s been a year since they got the tattoo and they don’t regret it yet.

“Almost a year later and I still don’t regret it. It’s been 11 months [and] I still have no ideas or any desire to find a cover-up artist,”

When asked enough times why they got a tattoo in the first place, they simply said it was because they wanted to and you know what? Queen shit.

But the internet was shocked and it was going to take time to bring them back to their normal calm(ish) state.

Me when she lifted her shirt: pic.twitter.com/HgdvtC7Ipb

The more they said, "Don't be alarmed", the more opposite the effect was on the internet.

Because they were very, very alarmed.

Here's hoping all their future partners are also named Alexander.

Lmfaooo, damn, now I'm even more glad I was able to get my ex's name removed from my vagina😭😭😭😭"Don't be alarmed" Chile😂 pic.twitter.com/eE8iCa7wwo