Posted by Sama in Cool On 3rd May 2021
ADVERTISEMENT

An accidental childhood picture that turned into a meme for the next many coming years and gave birth to the infamous "Disaster Girl" is now sold at a whopping $500,000. Zoë Roth, who is now a college senior in North Carolina, plans to use the proceeds from this month’s NFT auction to pay off student loans and donate to charity. 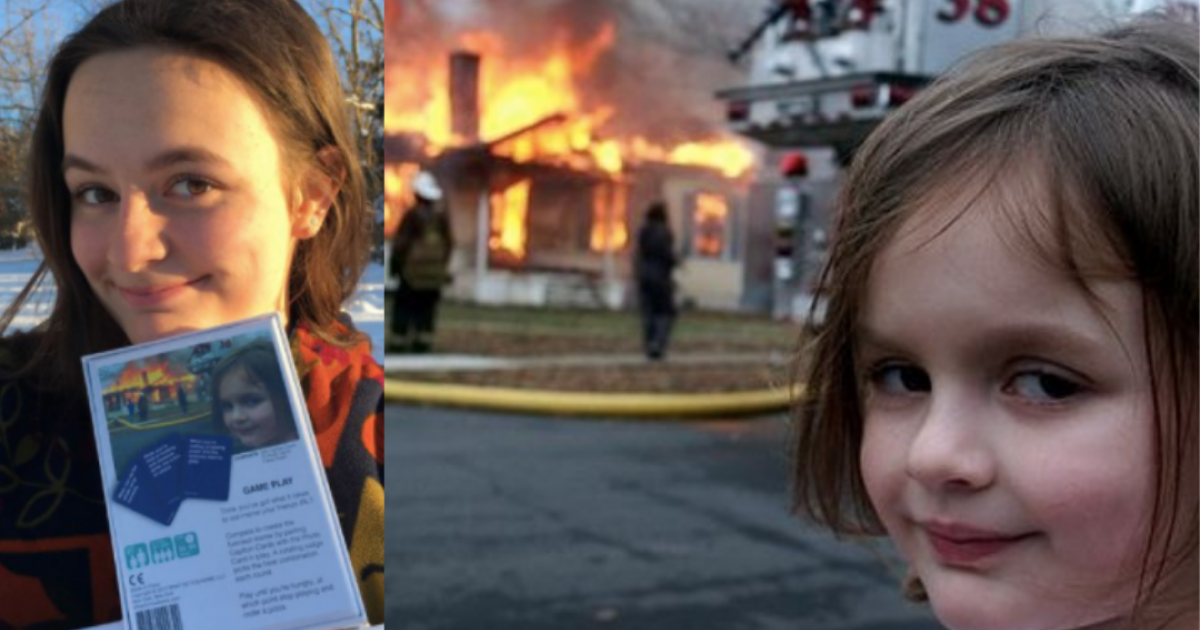 You might not be familiar with the name Zoë Roth but chances are you all might have seen this iconic picture.

Back in 2005, when Ms. Roth was only four years old she went with her father to look at a neighborhood house that was on fire in Mebane, N.C.

Firefighters had intentionally set the blaze as a controlled fire, so there was nothing much to worry about. Neighbors gathered and firefighters allowed children to take turns holding the hose. 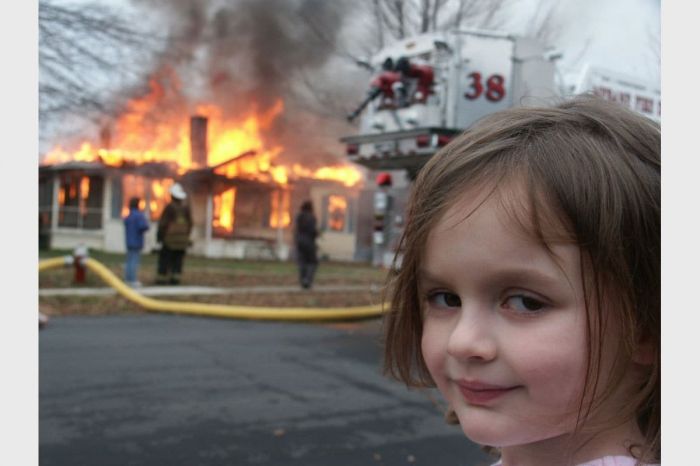 The girl who is now a senior at college remembers her dad who was an amateur photographer at the time captured the perfect snap when he asked his daughter to smile in the camera. Ms. Roth with her messy hair gave a smile which is now well known as a devilish smile with disastrous fire causing havoc behind her. As a result, the well-known "Disaster Girl" was born.

In the years since Dave Roth, Zoë’s father entered it in a photo contest in 2007 and won. Since then the image has been edited into multiple scenarios and each one far worse than the original one, for example, one where Ms. Roth is giving her devilish smile as a meteor wipes out the dinosaurs or the Titanic sinks in the distance. 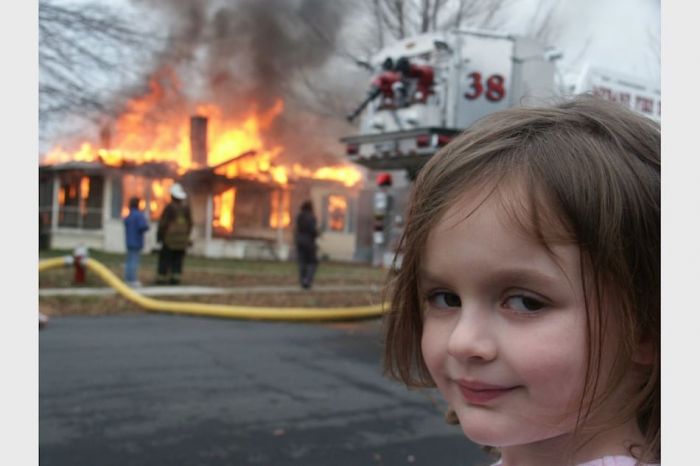 Now after years of serving the meme purpose, Ms. Roth has finally sold the original copy of her meme as a nonfungible token, or NFT, for nearly half a million dollars. 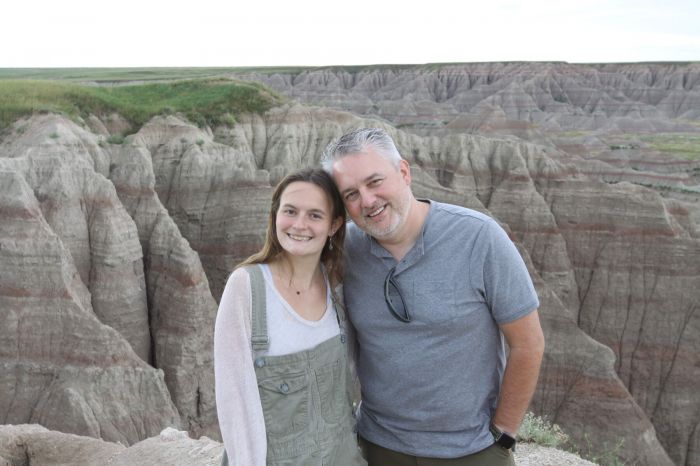 In the meme hall of fame, “Disaster Girl” ranks alongside “Ermahgerd,” a pigtailed teenage girl posing with “Goosebumps” books; “Bad Luck Brian,” immortalized in a grimacing yearbook photo with braces; and “Success Kid,” a toddler on a beach with a clenched fist and an expression of intense determination.

Ms. Roth speaking about the experience in her interview said that selling the meme was an attempt by her to control a situation as she felt powerless ever since she was in elementary school.

Before making the decision to sell, Ms. Roth consulted “Bad Luck Brian” himself — his real name is Kyle Craven — and Laney Griner, the mother of “Success Kid.”

“It’s the only thing that memes can do to take control,” Ms. Roth recalled Mr. Craven telling her.

“Disaster Girl” memes have spread far and wide. In fact, once a group from Poland asked permission to use the meme for educational material about a dying Indigenous language. Someone even in Portugal sent Ms. Roth pictures of a mural with the meme. 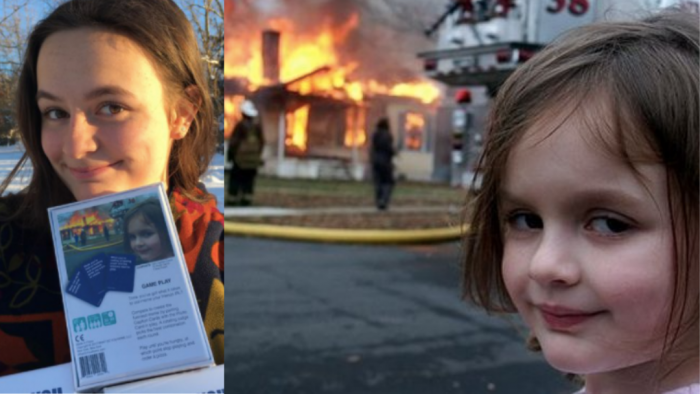 “You just make it fit however you want to fit it,” she said. “I love seeing them because I’d never make any of them myself, but I love seeing how creative people are.”

She says that she has seen hundreds of recreations of her picture. One shared last summer during racial justice protests was among her favorites, she said.

“Once it’s out there, it’s out there and there’s nothing you can do about it,” Mr. Roth said. “It always finds a way to stay relevant with whatever new kind of awful, terrible bad thing is happening, so I’ve laughed at a lot of them.” 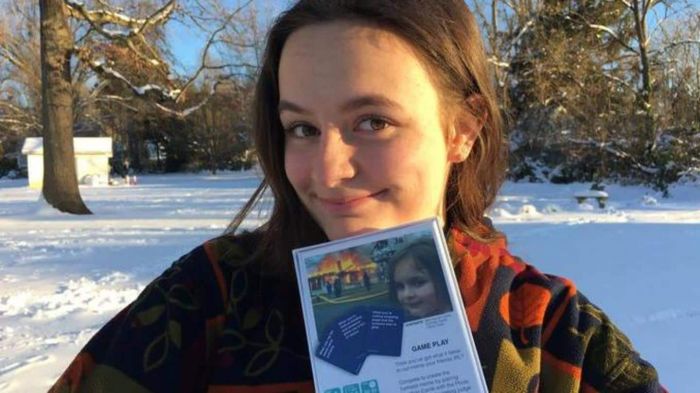 “People who are in memes and go viral is one thing, but just the way the internet has held on to my picture and kept it viral, kept it relevant, is so crazy to me,” she said. “I’m super grateful for the entire experience.”

She says that when she walks past the place where it all started it makes her wonder if the residents there know that it’s a “meme place."

“People who are in memes didn’t really have a choice in it,” she said. “The internet is big. Whether you’re having a good experience or a bad experience, you kind of just have to make the most of it.” 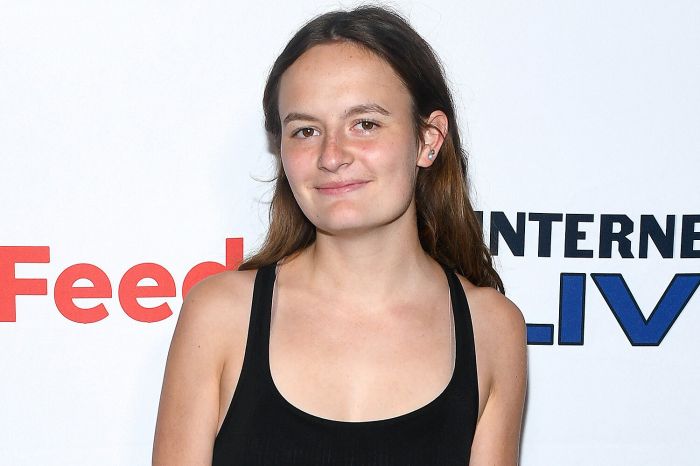