Girl With Vitiligo Learns To Accept Her Body Through Bodybuilding

A girl from Utah, who's suffering from vitiligo reveals how she learned to love her body through bodybuilding. She used to cry for hours in front of the mirror, but bodybuilding has given her confidence to flaunt the skin she hid for years. 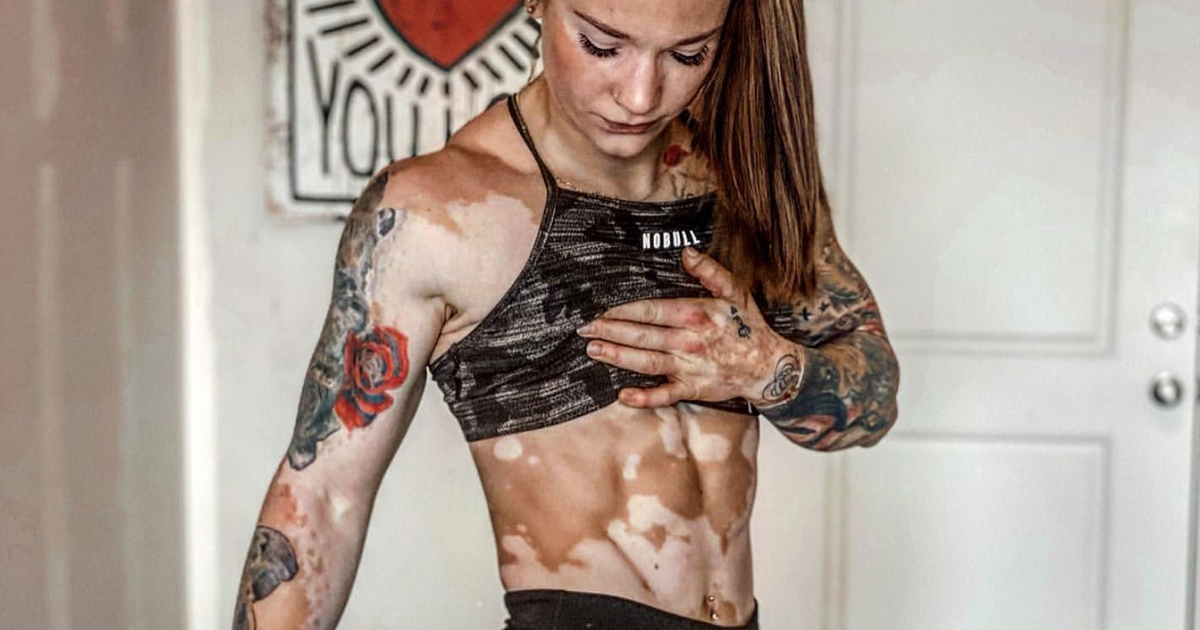 Most of us suffer from body image issues. There's something we don't like about our bodies. And it's hard to accept our body as it is, without having the need to fix this or that. Although the body positivity movement is gaining attention and support, it's still hard to love our bodies unconditionally. But one woman is successful in this journey, as she found a way to tackle these issues with the help of bodybuilding. 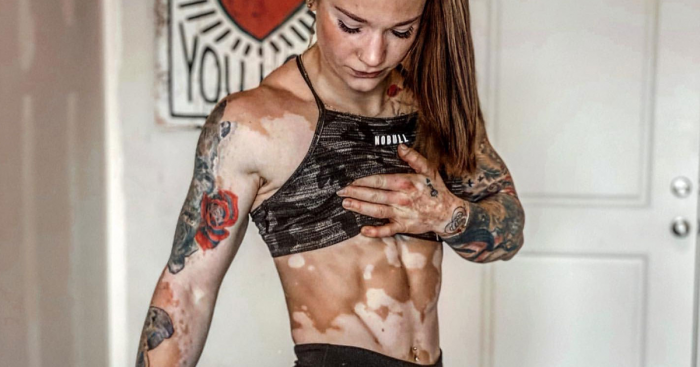 Meet Antonia Livers from Utah, USA, and she has vitiligo

When she was just 14 years old, personal trainer Antonia Livers, now 27, from Utah, began to notice white spots forming on her eyelids. Not knowing what they were, she went to the doctor where she was diagnosed with a rare skin condition called vitiligo. 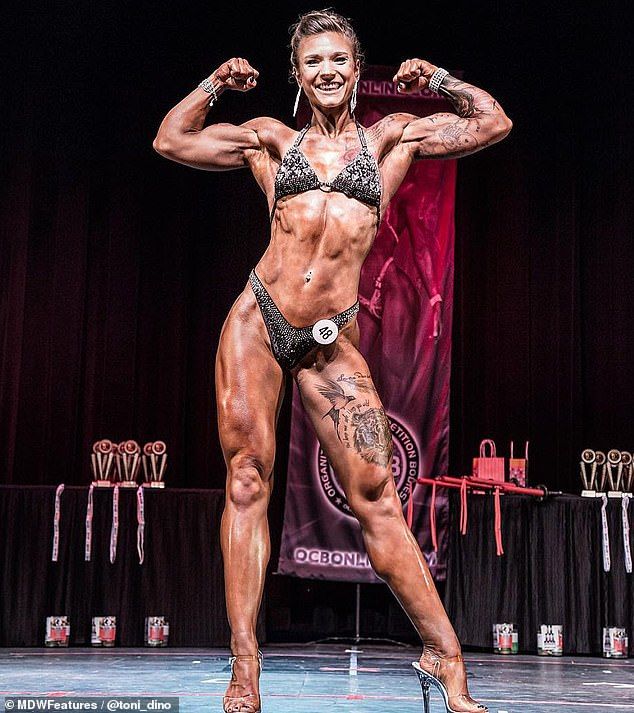 Antonia was just 14 years old when she first noticed white patches forming on her eyelids. They quickly began spreading across her body

Antonia began developing white patches on her eyelids when she was just 14 years old, an age when almost everyone becomes sensitive to how they look. Over time, the patches get larger and spread throughout the body. Naturally, Antonia was devastated to get diagnosed with this condition, spent hours and hours crying over what she looked like, and worked hard to hide it from others and herself. 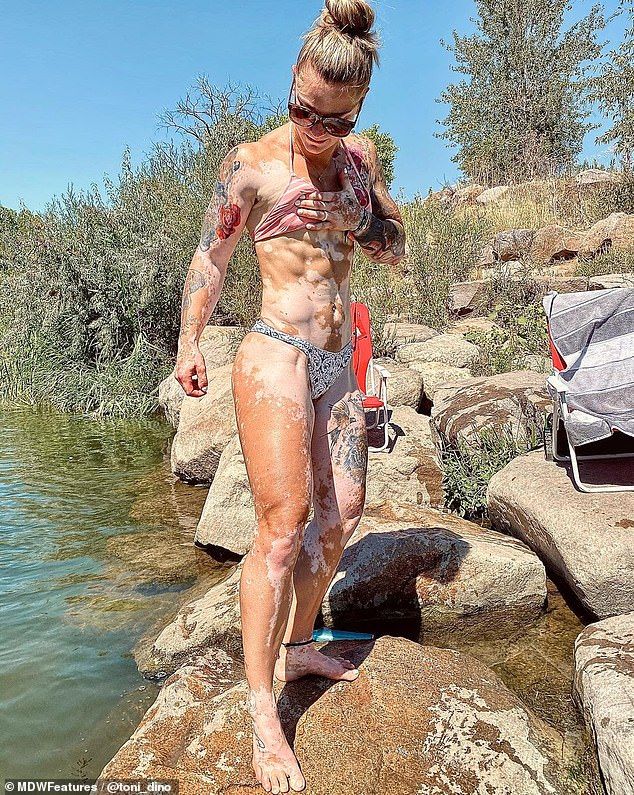 Antonia spent years trying to hide her skin, and would often cry in front of the mirror

As a teenager, Antonia hid her vitiligo with makeup to avoid any unwanted comments from her classmates. Vitiligo patches spread to her arms and legs and Antonia also wore long sleeve t-shirts and trousers so that strangers couldn't judge her. 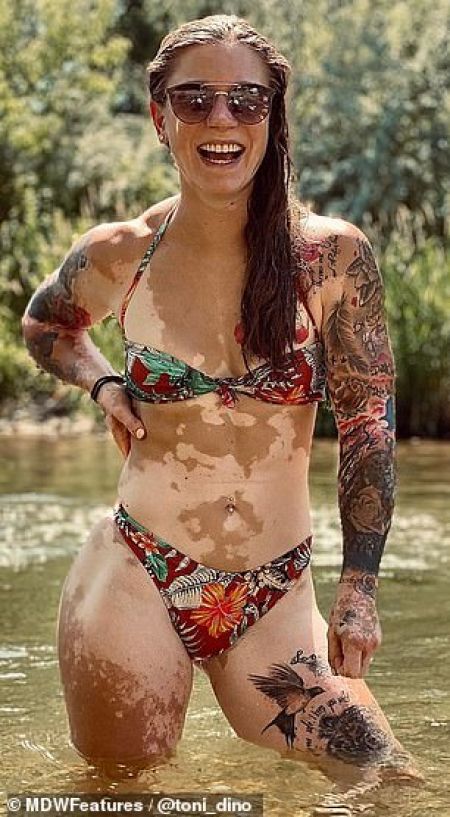 Completely covered, Antonia managed to avoid negative comments regarding her appearance. However, with her makeup and long sleeves removed, Antonia couldn't help but judge herself and spent hours each day looking at her patchwork skin in the mirror and crying.

Antonia's insecurities surrounding her appearance often prevented her from dating

Antonia hated the way she looked, believing that her vitiligo made her ugly. She felt angry that a skin condition that she had never heard of before her diagnosis was ruining her life. Antonia's insecurities surrounding her appearance often prevented her from dating for fear of what potential boyfriends would think of her. 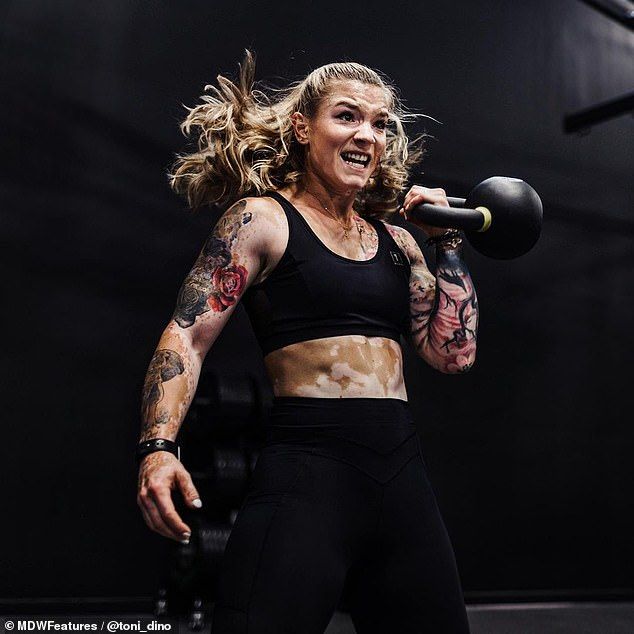 She wanted to get rid of her white spots

'I found the first spots on my eyelids when I was just 14 years old,' Antonia said. 'When you're 14 you don't want to look different to other girls. I would just stand in front of the mirror and cry every single day.

'I was telling myself every single day, "How ugly am I? Why do I look like this?" 'I never asked for those white spots, I never wanted them back then.' 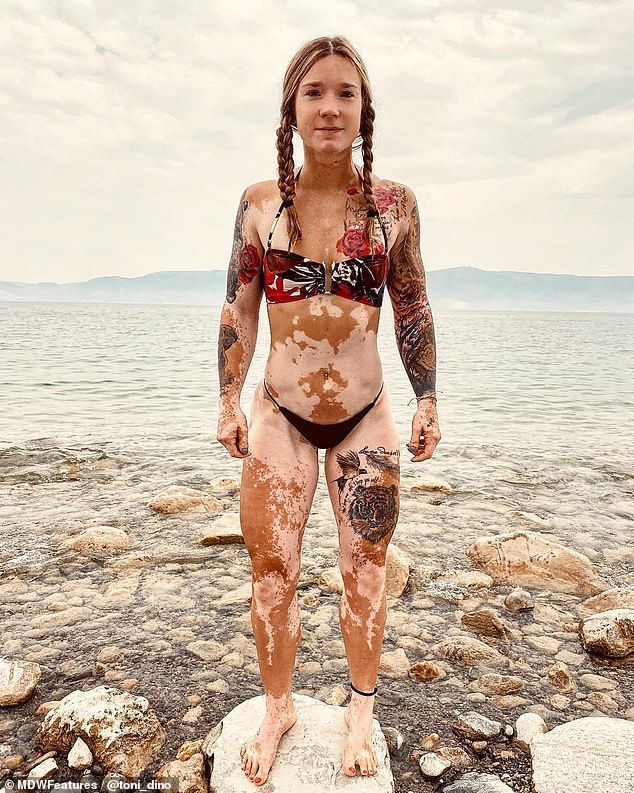 But as she grew older her white patches were growing too

'I would wear long sleeves, T-shirts and long trousers just so random strangers couldn't judge me. I would always be wearing makeup to make sure no-one knew about my vitiligo.

'As I grew older my white spots were growing too.' 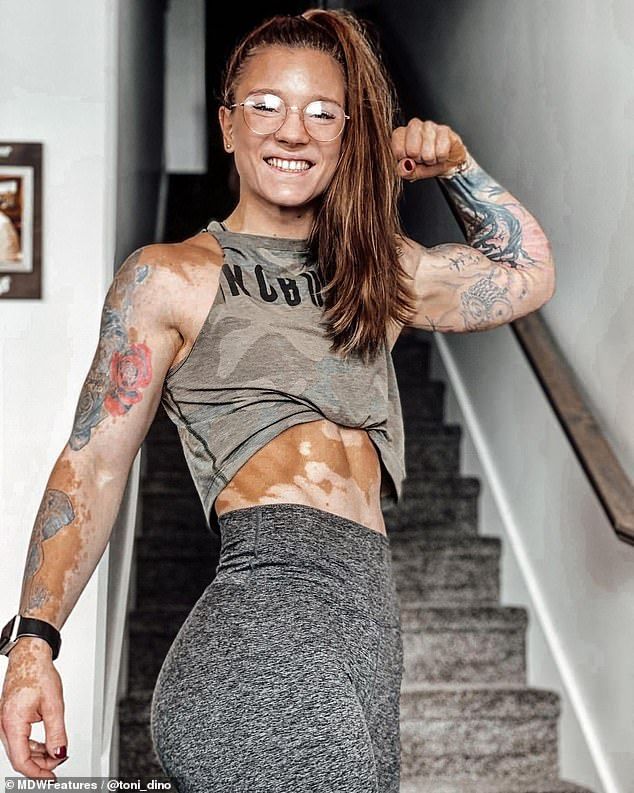 However, embracing fitness helped her to overcome these insecurities

In her late teens, she turned to fitness, visiting the gym at least four times per week where she did both cardio and weight training. For Antonia, pushing her body to the limit of its capabilities served as an opportunity to release the stress she felt because of her vitiligo.

Antonia was able to control how her body looked and the way she felt in a way that she couldn't control her skin. 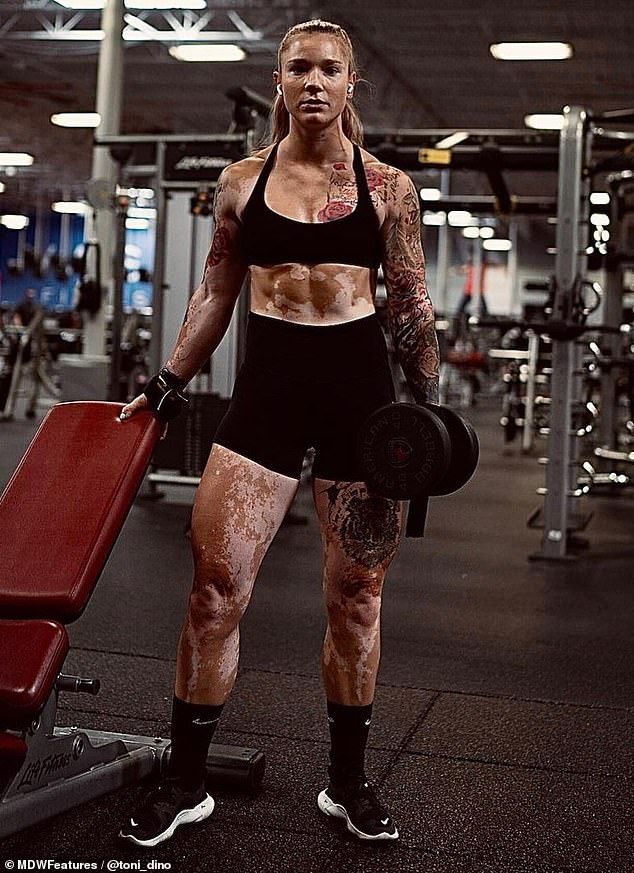 'I fell in love with fitness which helped me overcome my insecurities. I went from self-hate to self-acceptance and finally to self-love and appreciation,' Antonia revealed.

'I started working on my body which led to working on my mind. I got physically stronger which had a huge impact on my mental strength.'

Antonia's husband, Poppy, 28, has also been incredibly supportive of her

In 2017, Antonia moved from her childhood home in Cologne, Germany, to Utah, after meeting her personal trainer husband, Poppy Livers, 28, when he was in Germany playing American football.

On arriving in the US, Antonia was able to land her dream job as a personal trainer. Becoming fitter and gaining more confidence in her appearance, Antonia began to overcome some of the insecurities that had plagued her teenage years. 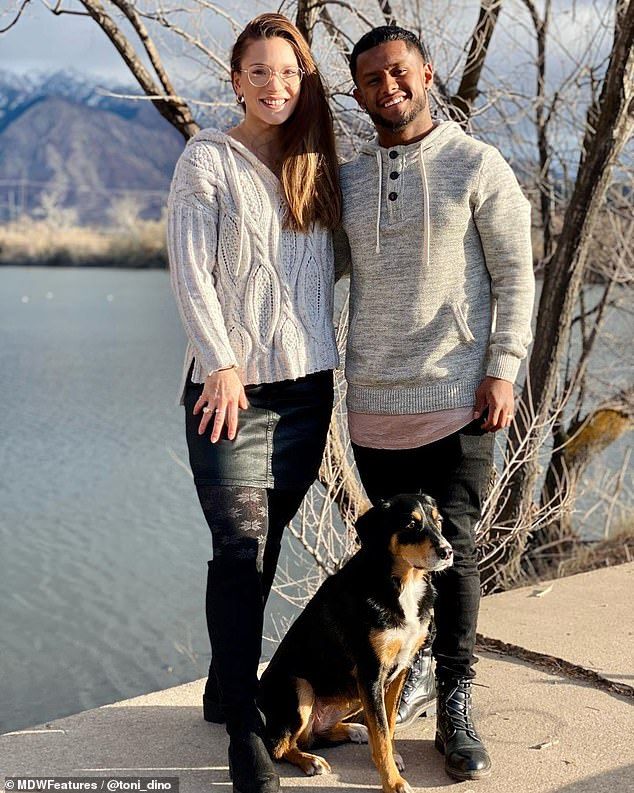 'My job literally saved my relationship with myself. Realizing this still makes me tear up today,' she said.

'I helped myself out of that dark place just by being active and being good to myself.'

Antonia now proudly shares images of her body on social media, where she has earned an impressive following

Today, Antonia is proud to post pictures showing off her vitiligo on Instagram and receives comments from strangers saying that she is a 'multicolored beauty' and an inspiration.

Although Antonia's vitiligo has continued to spread across her body, she has no intention to hide her unique skin and is purely focused on improving her own life and the lives of those she coaches. 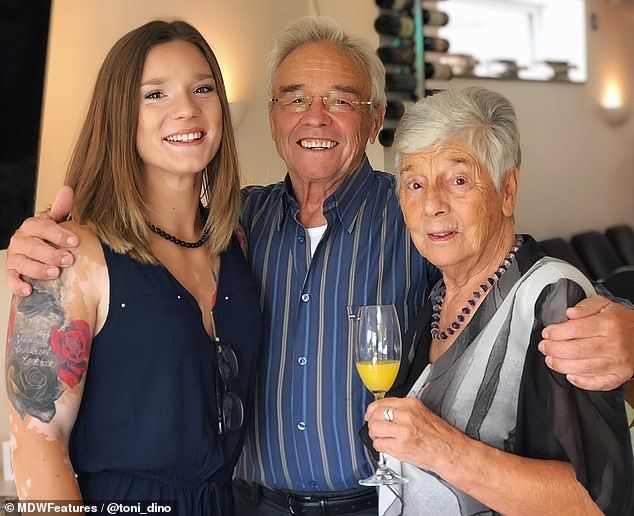 'It's great to be different,' Antonia said. 'Average never made it to the top, so find your insecurities and turn them into some bad*** strength. I seriously love what I'm doing. I love helping people on their individual health and fitness journeys. I truly couldn't imagine a better job than seeing people getting better, both physically and mentally. For me, working out is my therapy. We have to control what we are able to control in our lives.'