Posted by Sama in Confessions On 16th October 2021

It is an unspoken rule that only the bride is allowed to wear white on the wedding day, however, this Redditor's family decided to take their prank an extra mile, and in order to check if the bride is a 'bridezilla' all the women of the family wore white to the wedding. Furious and upset, the groom kicked his whole family out of the wedding and now he is asking the Reddit family if his reaction to the situation was overboard?

A groom took to social media platform to share how he kicked out all the female guests of the family when they arrived in white dresses to pull a prank on his wife.

Sharing his story to Reddit's 'Am I The A**hole?' forum - where users can share their story and other users vote on who was in the wrong - the groom shared that he have had enough when the women of his family decided not to spare his wife even on their wedding day and played a crude prank on her.

It is literally an unspoken rule that only the bride gets to wear a white dress on the wedding day.

Writing under the handle 'More-Concern3267', the 33-year-old groom revealed how he has a large family, consisting of "mostly aunts and female cousins aside from mom, stepmom, stepsister, and grandmother".

The man then further explains that the women in his family "are into teasing and joking", adding: "They've formed a unit (which I admit is kind of toxic) and they'd tease and roast every new woman that enters the family by marriage by setting up 'tests' to see if they deserve to be part of the family."

The Redditor says that the teasing would go on for months till the woman is finally accepted into the family.

He explains that when he first introduced his girlfriend-now-wife to the family,  he "made it clear" that he didn't want the women to "come at her or harass her". However, as he writes: "They went behind my back and roasted her looks and job and I discovered they've been doing it on Facebook."

Onto the big day, and the groom states that the wedding took place two weeks ago. "There was talk about the women in the family wanting to pull a prank on my wife by wearing white and called it the 'ultimate test' to see how my wife react," he writes.

"My brother warned me so I announced that if any one of them showed up in white I'd have them kicked out," he explained - a rule that included his own mom. 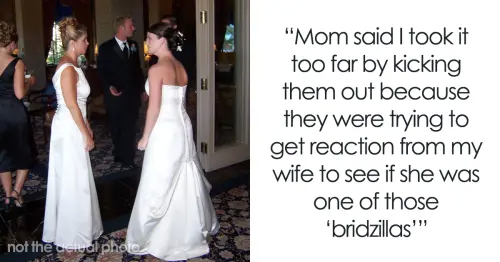 The groom explains that he was left speechless after they all "showed up to [his] wedding one by one wearing white dresses". In response, he asked them all to leave.

"The senior women of the unit who are Mom and aunts also showed up in white but refused to leave," he adds. "I threatened to take harsher action and mom was pissed telling me to step aside but I didn't let her in. I had her leave while the men in the family were watching stunned, dad was on my side and supported me a lot.

"I felt absolutely awful because my wedding was being interrupted by them making scenes.

"My wife was hurt beyond measure but the women in the family were p***ed." 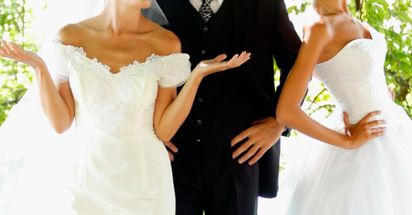 But after the wedding, the whole family criticised the groom for taking a simple joke overboard, stating that his wife "was so insecure she couldn't handle another woman's presence at her wedding".

In the arguments that followed, the women allegedly said that they "were trying to get reaction" from the bride in order to see if she was "one of those 'bridezillas" and that they were "going to change soon as [the] prank was over". They also told the groom that he had ruined his own wedding by "reacting so aggressively". 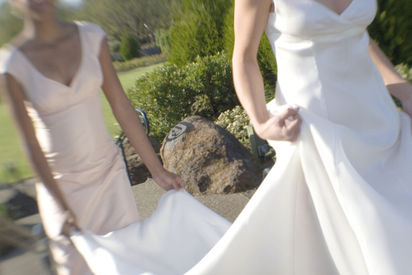 The internet overwhelmingly supported the groom and labeled him NTA.

Many lauded the groom for standing firmly beside his wife and sticking with her right till the end which makes him a gem of a person.

One commenter wrote: "Our family is toxic and I am so sad for your wife that they would do that, but also so happy for her that she has a husband who will support her and have her back.

"I'm sorry your family tried to hijack your wedding for a power play, but you did the right thing, and your marriage will be stronger because of it."

A second added: "This level of hazing has crossed the line to emotional abuse & blackmail. And that is probably understating it.

"It's very good you stood up for your spouse. You handled it well but emotional blackmailers use family to pressure the victims into compliance with the abuse.

"Most often when standing up to familial emotional blackmailers, it ends with forced no contact for non-compliance. No contact is healthier but it can be hard to be shunned from the family."

And a third added: "So they're bullies, and if your wife puts up with the bullying her reward will be having to bully any other women to join the family? That's uncool, and it's perfectly reasonable to stick to your guns."