Hollywood’s Hottest Cars: Where Are They Now?

Have you ever wondered what became of the original Batmobile, or where the DeLorean actually travelled to after shooting Back to the Future? Sometimes the automobiles driven in TV shows and movies are more memorable than the actors themselves. Some of these cars from your favorite films are worth millions of dollars, and collectors often try to get their hands on one or two of them to show off. But one thing is for sure, they are part of what made Hollywood famous. 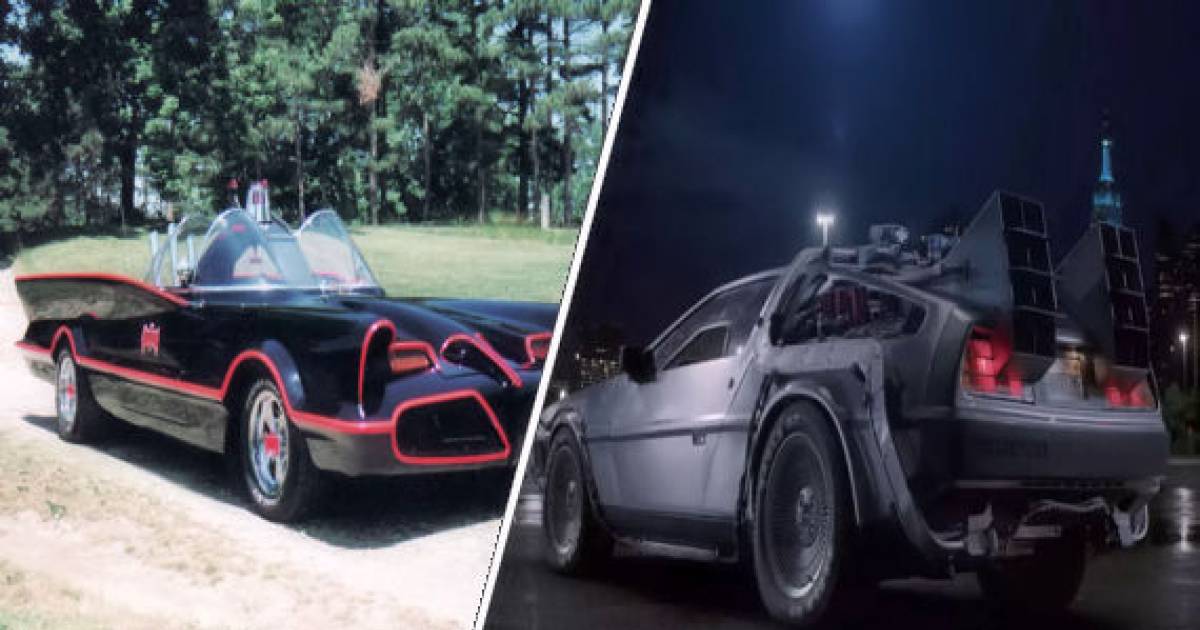 #1 The Fast And The Furious Charger

The 1970 Dodge Charger R/T was damaged, destroyed, rebuilt, damaged, and rebuilt again. The car, an inheritance from Dominic Toretto's father, played by Vin Diesel, has been featured in The Fast and The Furious, as well as Fast 4, 5, and 7. There were four cars used for driving and one without an engine that was used for interior shots. The original Charger now belongs to movie car-collector Bob Hartwig who lent the car to the crews of Fast 5 and 7. The #2 âhero' car, the only one with an actual Hemi V8 engine, from Fast 4 and 5 was sold at auction for $95,700 in 2013. 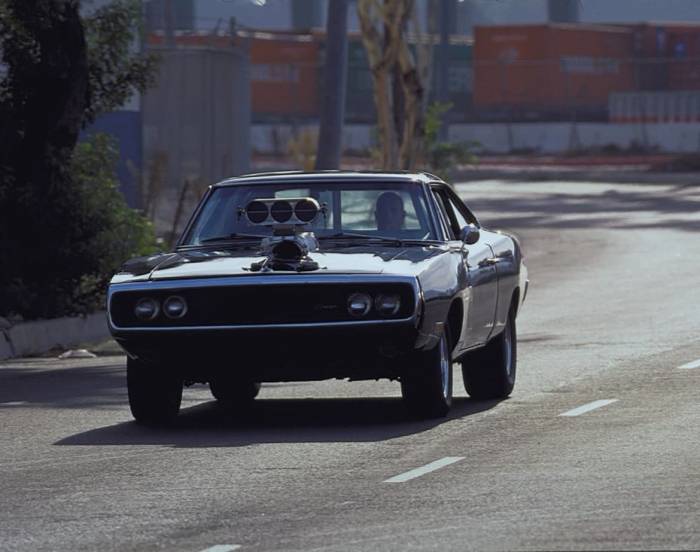 #2 The Bandit Trans AM

Burt Reynolds sped around Florida and Georgia in this Trans Am in the Smokey And The Bandit movies with Sally Field by his side and Jackie Gleason on his tail. This gold-trimmed '77 Pontiac Trans AM Special Edition T-top was altered a little for filming, as only the front end is a 77 model and the rest is a '76. Only four of these fantastic Firebirds were made for the film, and by the end of shooting, only one barely remained running, with one destroyed in the classic bridge jump. Last year, the lone surviving promo car was put up for auction by Universal Studios where it sold for half a million dollars, plus a 10% buyer's fee to car collector John Staluppi for his "Cars of Dreams Museum" in Palm Beach, Florida. Several parts from the other cars are floating around in museums or collectors garages, but this was the only complete car left after the final filming. 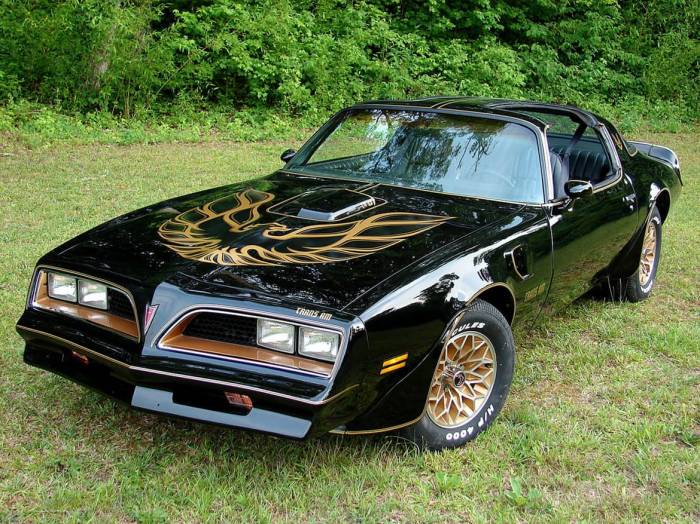 The classic car driven by James Bond, played by Sean Connery, in Goldfinger, is a tricked out and modified Astin Martin DB5. Astin Martin gave the producers two cars for production. One was used for the road, and the other became the effects car, topped off with all of the fun little gadgets that Bond was so well-known for. The road car used also in Thunderball, was held onto by Astin Martin until Jerry Lee bought the beauty for only $12,000. Lee sold the car for $4.1 million but the auto was stolen from a Florida airport Hangar in 1997. There are plenty of rumors surrounding the theft, but the car has not been located since it was stolen. 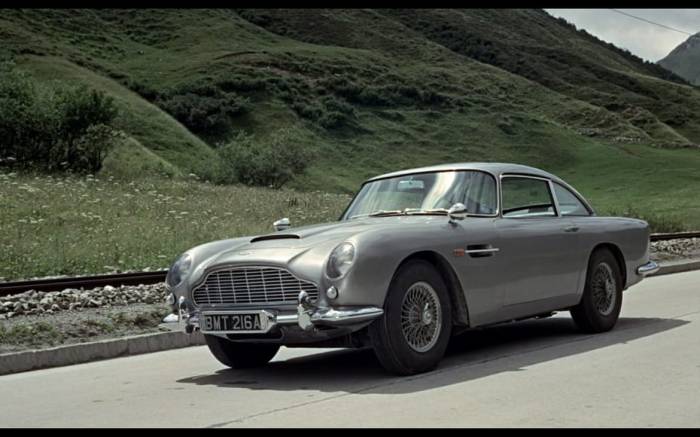 Bullitt is one of the greatest films ever, and certainly the greatest film about a car. Starring Steve McQueen, Bullitt features the highland green, 1968 fastback Mustang GT390. Allegedly only two Mustangs were used for shooting this film, though WB executives offered "Bullitt Mustangs" for sale shortly after the film hit the screen. The stunt car was scraped of course because there was nothing left to it when filming completed. The original was sold to a WB employee for only $2,500. Changing owners a few times, it finally made its way into the hands of a collector in 1972. The car has only been seen publicly a few times over the years and offers to purchase or rent it for other films have been turned down. 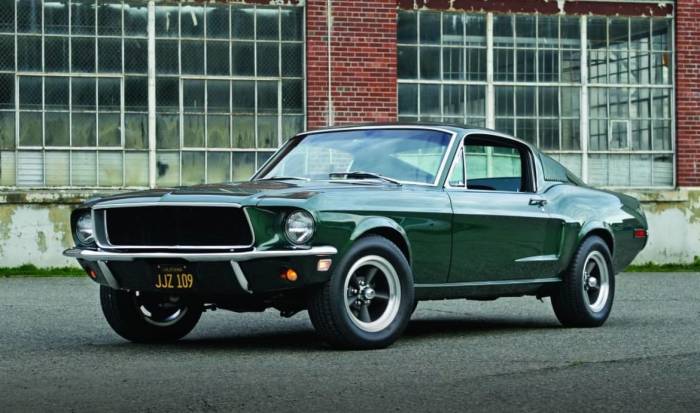 One of Hollywoods most famous cars, the 1981 DMC-12 has also become perhaps the most famous time machine of all time. Seven DeLoreans in total were used during production for the trilogy. Six of which were purchased from DMC, and the seventh was a fiberglass replica used for flying sequences. The main car, with all of it's added special gadgets, is still a piece of perfection and sits in the Peterson Automotive Museum in L.A. A stunt car sits at Universal Studios in Florida. After the trilogy finished shooting, the last of only three remaining time traveling DeLoreans, fitted with white walls for the final film, toured the globe, got badly worn and torn, and was beautifully restored and sold to a private interest in New England. There are approximately 6,000 remaining DeLoreans running today, so there's still a chance to find one and get back to the future. 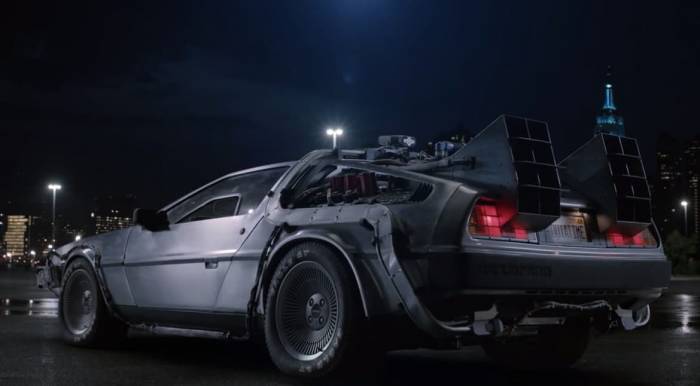 With the film made on a shoestring budget, only the one Falcon was used for shooting, modified by Murray Smith, Peter Arcadipane, and Ray Beckerley with Concorde front end, and a useless but mean looking supercharger. After the first film was in the can, the Mad Max Interceptor was given to stuntman Murray Smith who then, after failing to sell it, returned it for shooting of the sequel. They built a supercharged duplicate for the sequel but it was blown up, leaving just the rusting original. Left for scrap when filming was complete, the car has changed hands several times, always getting a customized touch. It finally wound up at the Cars of the Stars museum in Keswick, England. That museum was bought by the Miami Auto Museum in20111 and sits proudly for the world to see in Florida. 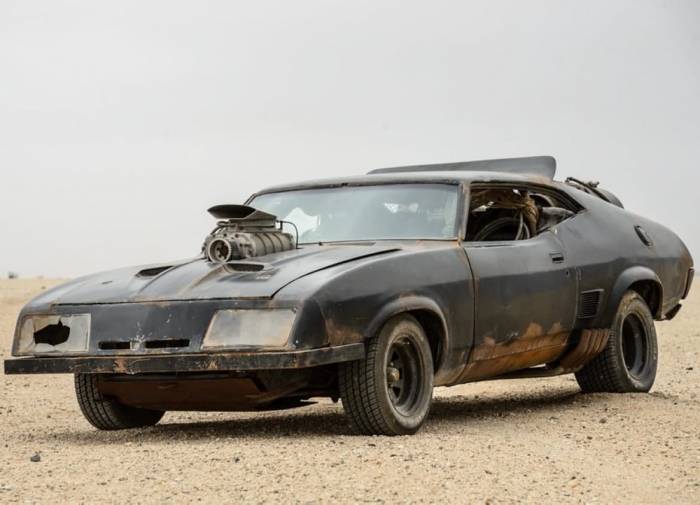 The caped crusader's first on-screen ride: the Batmobile! First built in 1965 from a '55 Lincoln Futura concept car, this not overly exceptional car with a 390 V8 in it, was designed and customized by George Barris, who was originally sold the car itself for $1.00 just one dollar! There were at least five other Batmobiles made by Barris and his co-workers, but the "#1 Batmobile" came back to Barris' possession after the Adam West Batman series' last episode in 1968. Come 2013, George Barris sold the now legendary car at the Barrett-Jackson auction (where most of the above cars also been auctioned), for 4.2 million dollars to Rick Champagne. Allow that to sink in this man bought a car for one dollar, he spent $30,000 to modify it, bringing it's value in '66 to $125,000, rents it to the Batman crew, then sells it for 4.2 million dollars! Not long before Barris passed away last year, the Batmobile went up for sale at $5,000,000. It has since been sold to an undisclosed buyer at an undisclosed price. 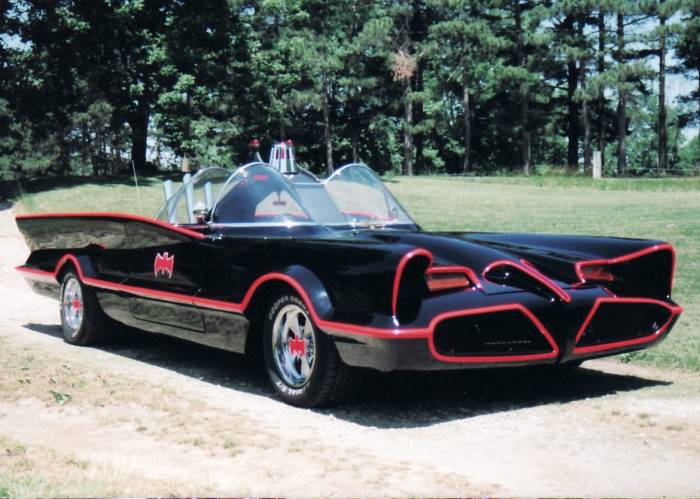 Them Duke boys had some fun in this baby. The '69 Dodge Charger that was the main feature (besides Daisy Duke) of Dukes of Hazzard. There were several different cars used, each for filming different scenes and stunts. Now a controversial car, by name alone, the General Lee was created over 260 times, one for every fatal jump the car made in the series. The very first General Lee ever built for the show, was bought by pro golfer Bubba Watson in 2012 for $121,000. It was slated to have the roof redone to cover the Confederate flag, but Watson declined, and instead just covers that up if need be with a magnetic orange slab. 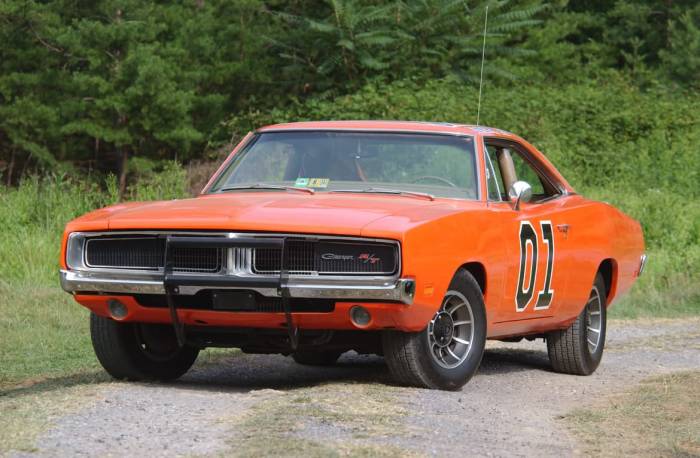 The famous '32 Deuce Coupe from Scorseseâs American Graffiti. Laden with an exposed '66 327 Chevy engine, THX plates, and chopped top, this car, not entirely alone, helped launch George Lucasâ career, as well as those of Harrison Ford, Ron Howard, and Richard Dreyfus. After the sequel, More American Graffiti, one Steve Fitch bought the coupe at auction in 1983. Two years later, Rick Figari bought the coupe, and toured with it, showing it off to thousands of fans all over America. He went so far as to buy a copy of the '55 Chevy the coupe famously raced in the film. After years of attempts of people trying to steal and clone parts of the car to create their own touring attraction, Figari decided to give up his dream car and put it up for sale. In 2011, Figari parted with the one and only American Graffiti '32 Ford Deuce Coupe in exchange for an eight-figure sum from an undisclosed buyer in Japan. 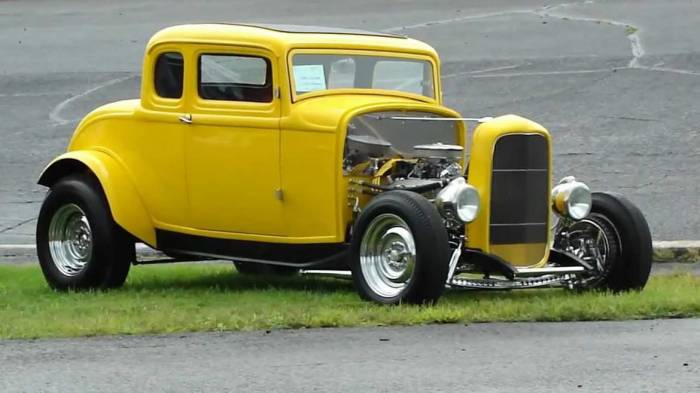 For those of you who don't know, K.I.T.T. Stands for Knight Industries Two Thousand (or Three Thousand if you know the remake of Knight Rider on NBC shot with a 08/09 Shelby GT500KR). The original car, driven by David Hasselhoff as Michael Knight, was a 1982 Pontiac Firebird Trans AM. The body and interior modified to carry flashing lights, buttons, and screens (by George Barris) for the futuristic look common of shows in the 80s, were surprisingly foretelling with regards to today's many gadgets and gizmos. Universal Studios kept hold of one âhero' car (the car used for those slick close-ups), and one stunt car. The other three are believed to now be privately owned. Searching the web, one can find several auctions claiming the sale of an original K.I.T.T. But there are more of these originals advertised than were ever built for the original show. 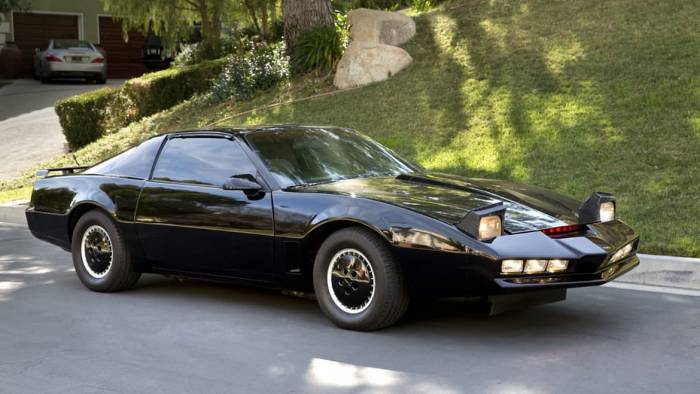 The sweet '76 Ford Gran Torino, finished with black wall tires, signature white vector stripe, and a 351 Windsor V8, could very well be a bigger star of the old ABC Starsky & Hutch, than the title characters themselves, played by Paul Michael Glaser, and David Soul. Ford produced an additional 1,300 replicas as popularity for the T.V. Show rose. The original, or so it is claimed, was sold to an unnamed buyer for $40,000 in 2014. The movie version of the series in 2004, starring Ben Stiller and Owen Wilson, used two cars, one was sold for $50,000 at the same auction. 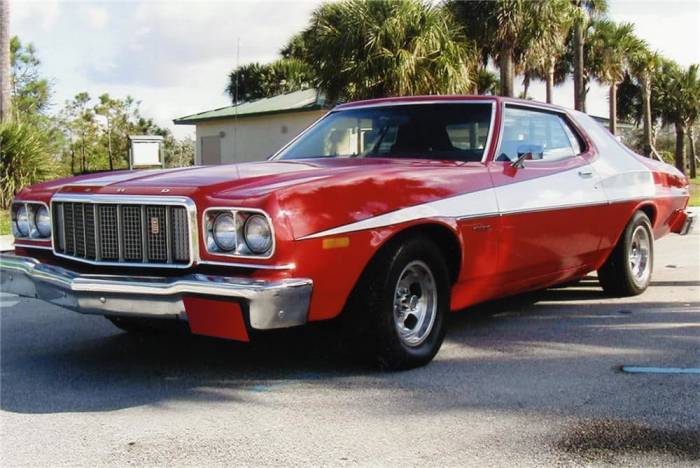 The villainous '58 Plymouth Fury is truly the star of John Carpenterâs, Christine. Realistically this most evil car of Hollywood history is a mash-up of twenty three Plymouth Belvederes, Savoys, and actual Furys. Sixteen of these cars were used for filming, and the other seven were kept as part-cars for maintenance during shooting. Come the conclusion of the film only three Christines remained in pristine condition and were each sold off to private collectors. One Martin Sanchez managed to salvage one of the junked Christines (along with a flatbed of other junked Christines, for only $20 a truckload) from the wreckers, and restored it to beautiful working condition, though it's unfortunately unlikely he will ever part with this piece of cinema history. Now one of only two of the classic horror icons remaining, Sanchez has said that he wouldn't part with Christine even if he was offered one million dollars.

âBaby', the '67 Chevy Impala, passed down by John Winchester (played by new Walking Dead super villain Neegan Jeffrey Dean Morgan) to his eldest son Dean Winchester (Jensen Ackles), likes to make noise with its 327 V8 4 barrel with 275 brake horsepower. This black beauty is, of course, one of the main characters of the hit T.V. Series, Supernatural. Though eight of these impressive Impalas are used for filming, the one hero car is the most often seen, and the most often used, in spite of all the satisfying stunt work in the show. That being said, when the car was initially purchased, it had only 19,300kms on the odometer, and now, in the twelfth season of filming, this hero car has only 25,000kms. Considering the Winchesters travel all over the United States, that's one hell of a feat for this truly heroic car. Given that fact, these cars, untouchable for now, can still be seen driving around B.C. where they shoot the show. 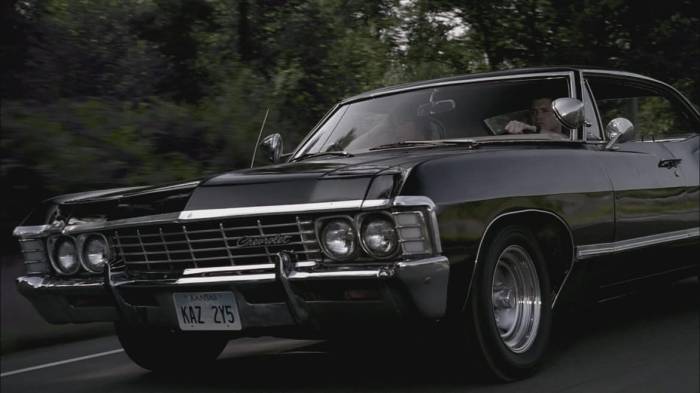