Recently, disturbing footage surfaced on Internet where a double amputee man could be seen writhing with pain on the road during one of the protests at Columbus, Ohio while it is reported that his legs were repeatedly snatched by the police and they refused to give it back to him even after seeing him in this much pain. And to add to the horror, the police even maced the disabled man with pepper spray.

#1 A mandate issued to stop the use of pepper spray and tear gas on protestors.

The city of Columbus, Ohio issued a mandate a few days back asking cops to stop using pepper spray and tear gas after a number of incidents were reported at the protests where the following weapons were used on innocent people. It was issued for the police to not use these items to “to disperse non-agressive, non-violent crowds.”

Protesters are lining each side of the intersection and cars/buses have been turning around. Group directly around officers has gotten smaller. @nbc4i pic.twitter.com/SKdwjd1Are

“Let me be clear,” Mayor Andrew Ginther tweeted. “Tear gas and pepper spray will no longer be used to break-up peaceful protests.” Ginther also pointed out that pepper spray use is strictly banned from instances of clear violence.

#2 Police given signal to use chemical weapons on the protestors.

But it seems like the order has already been rejected just like many others in the past. It seems like there is a difference of opinion when it comes to the definition of "peace" between the police and the protestors. For the cops protestors stand peacefully on the roads fighting for their cause, this is triggering for the police and serves as a signal to wage their war.

I watched a Black man who is a double amputee fall out of his wheelchair and crawl for yards down High Street after being maced. It was one of the most awful things I have ever seen. He was terrified. Your tweet did not help him. https://t.co/Z4P8VgqRNe

Last week, when protestors took to the streets in Columbus, the police were given the signal to use chemical weapons to disperse the protestors. Keeping in mind that the Mayor had already banned the use of pepper spray and tear gas on the protestors, but he very conveniently backtracked from his words and supported its use on the protestors who were standing peacefully on the roads.

“We have been clear about respecting and protecting peaceful protest. We also must keep city streets open to the public to travel and protect residents from lawlessness including the drag racing, fires and injuries in recent nights,” Ginther said.

“As police tried to clear streets, they were met with violence from some and took action, including using mace and pepper spray as appropriate to keep crowds in sidewalks.”

“I will reiterate again that we respect and encourage peaceful protest, but aggressive acts that put police and protesters in danger cannot be tolerated.”

Today in Columbus, Ohio, cops pepper sprayed a double amputee, disconnected his prosthetic legs, and took them away.

Watch the amputee crawl for help while people try to get his legs back.

The reason behind the police's aggressive behavior was claimed to be that the protestors were being violent against the police.

Apparently someone threw a motorized scooter at an officer and they were arrested. This incident appeared to be the impetus behind a major crackdown shortly after.

We need to ID this cop! C-Bus Ohio today! Attacked a double leg amputee peaceful BLM. Maced and then took off his prosthetics and tried to take them. pic.twitter.com/5kLK4PQoXy

As the Columbus Dispatch reported, Josh Williams of the Millennium Movement, who has been present for most of the demonstrations, said that he didn’t see the scooter throwing incident but did view the immediate aftermath at Broad and High Streets.

“Officers were using their bikes as weapons,” Williams said, noting that officers used bikes to push people back. That is also when tear gas was deployed on the crowd.

“They did everything that they said they weren’t going to do. They used excessive force and tear gas,” Williams said.

#5 One victim to police riots was a disabled man.

Unfortunately one of the victims of the riot police was a peaceful protestor who also happened to be a double amputee.

“I watched a Black man who is a double amputee fall out of his wheelchair and crawl for yards down High Street after being maced. It was one of the most awful things I have ever seen. He was terrified,” tweeted attorney Stacey Hauff.

The video of the incident is with a trigger warning and is very disturbing to watch. It shows a man writhing in pain on the road while people try to help him.

“Medic! Medic!” one of the people helping him screams. The man’s prosthetic legs are lying on the ground several feet away. 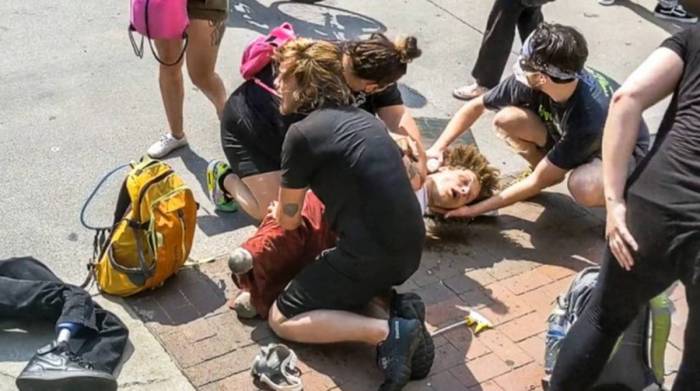 According to one of the witness protestors, the police ripped the poor man's legs off and refused to give him back. The man was in unbearable pain throughout this order. Fortunately, the protesters around his rushed forward to help him and retrieved his legs back but also faced a massive dose of pepper spray. The young man attacked was a peaceful protestor who was unarmed but was brutally assaulted by the police.

Another tweet was posted along with the video, alleging to have caught the act on film. It is reported that the Columbus police department is “investigating” the incident. 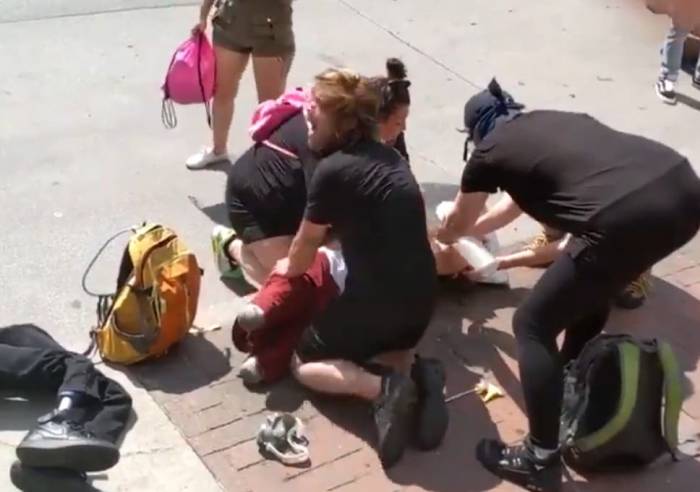