Posted by Sama in Bizarre On 17th January 2021
ADVERTISEMENT

With both parties telling a different story, the internet is left in a fix on how to interpret the situation. There are people who are slamming the waterpark for dragging the woman in front of her crying child while the waterpark's story of the lady going into the water without knowing swimming is justified too. Look at the video and let us know in the comments what could have been a better way to deal with the situation.

People on the internet called out a waterpark to have some shame after a video of its director dragging a woman in front of her child circulated on social media.

According to the New Zealand Herald, the incident occurred at the Waterworld water park in Browns Bay near Auckland on January 6.

#Watch A woman was left shaken after being dragged along the beach by the director of an Auckland water park.

This video captured the altercation.

He says he was both protecting the woman and preventing stealing.

As per the water park's official policy on its website, the children their parents or supervisors need to be competent in swimming if they want to visit the waterpark.

The woman in the video who s being dragged and has chosen to stay anonymous realized that she and her daughter cannot enjoy the services of the inflatable park she turned back to ask for a refund. But this was against the waterpark's policy.

So she decided to keep on wearing the lifejacket until the one-hour session that they paid for ends and till then she and her daughter can enjoy it in the shallow pool.

However, as she walked away with the life jacket to get her daughter's surfboard, a male staff member pursued her, telling her to take off her jacket and leave.

When she refused to take off the jacket the male member forcibly held her hand and started to drag her away.

Someone started to record the video just at the time when the lady was being forcibly dragged away and after it circulated on social media it is natural to say that the internet was applied by the staff member's crude behavior towards the woman and that too in front of her child. 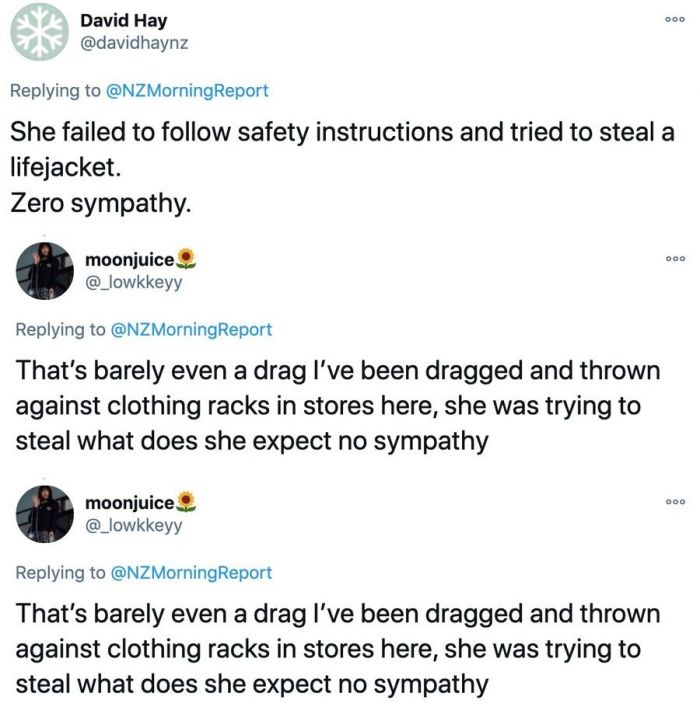 One person commented: "That dude is a prize a-hole. Which Auckland water park is it - I want to complain. Disgusted in Tunbridge Wells."

Another outraged viewer wrote: "As I watched the video, it looked like an assault to me. I don't think that store security staff are allowed to grab suspected shoplifters and drag [them] along. They can call the police. I look forward to a response from the NZ Police."

A third person wrote: "This is very sad, I am sure there must have been a better way to handle this." 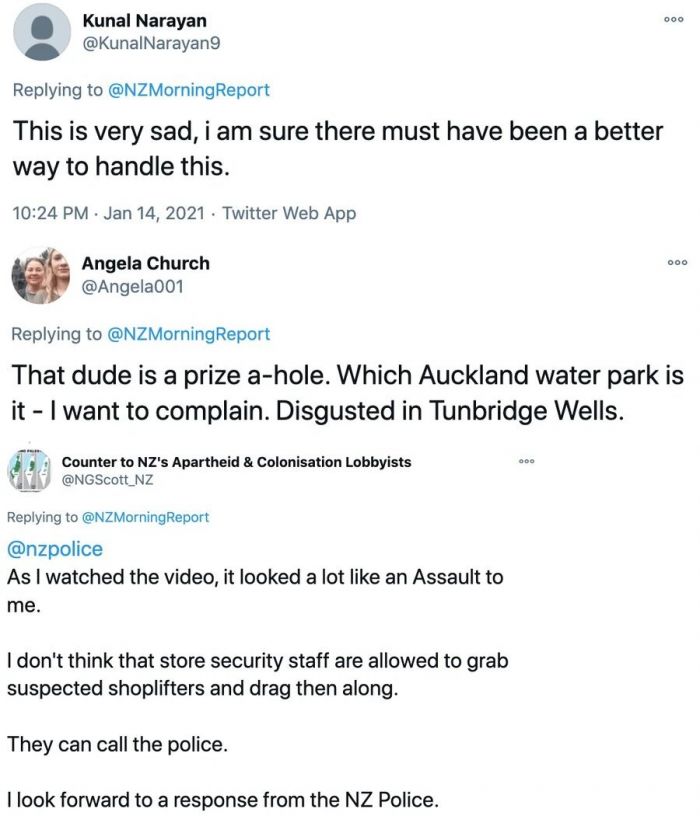 "I completely feel for that woman, perhaps English was her second language and she needed it explained to her! Are the staff not trained to deal with customers?

"He assaulted her no matter the circumstances he did not need to lay hands on her at all! Disgusting behavior!!

Interesting - "If we took her by boat and left her on the water park, there was a high chance that she might have drowned & one of our life guards may have missed it"

Though there were some people who were on the director's side.

For instance, one person commented: "Hardly a dragging - mostly squirming! I'm not big on companies that don't offer refunds in this type of situation (she seems no to have used the service & made an honest mistake?), but you shouldn't threaten to walk away with their equipment in protest!"

Another person wrote: "That's barely even a drag i've been dragged and thrown against clothing racks in stores here, she was trying to steal what does she expect no sympathy. [sic]"

A third person agreed with the above, writing: "She failed to follow safety instructions and tried to steal a lifejacket. Zero sympathy."

In an interview with The Herald, the woman in question stated:

"Based on my life experience, I thought I have the right to use the life jacket for the hour because they wouldn't refund me. We weren't going to go somewhere far."

"While he was talking, he already came up close to me and was trying to take the jacket off me... my instinct was to dodge and make sure he didn't touch me... I was trying to block his hand... but he was too strong.

"No matter as a human being or as a consumer, I think my rights haven't been respected ... I think me and my child have been insulted in the public. I was hurt both physically and psychologically." 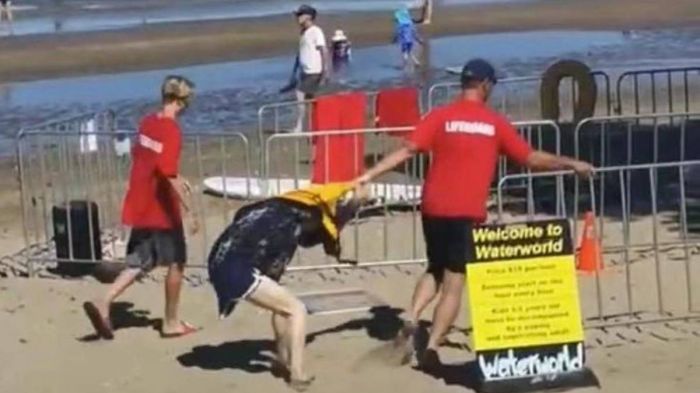 On the other hand, Waterworld director Kel Travers told the Herald a different story, one that completely justified the situation  stating: "She told me because she couldn't get a refund, she was taking the lifejacket and she walked away and I stopped her by holding the life jacket

"She told me that she was taking it because she couldn't get a refund and we stopped her from stealing the jacket. I was making sure that they didn't go into [the] water. They couldn't swim. She absolutely demanded being taken out by boat.

"If we took her by boat and left her on the water park, there was a high chance that she might have drowned and one of our lifeguards may have missed it, so there was absolutely no way that we're letting her into the water.

"At the end of the day, it's about people's safety. That is the number one rule. There is nothing else and there's no compromise on that."

Meanwhile, Jessica Wilson, the Head researcher at Consumer New Zealand, claims that the park was in the wrong, telling The Herald: "There appears to be some dispute, some confusion about the rule, but the staff member should have approached this in a much more professional manner.

"He can't treat customers like that. He should have clearly explained to her the situation and tried to resolve things. He should not have grabbed the jacket and pulling her along.

"There [are] clearly conflicting accounts of what happened and what was said, however, the woman shouldn't have been treated in the way she was by the staff member. If he was concerned she was taking the life jacket, he should have called the police."