Is 'Pretty Privilege' A Real Thing? These Redditors Think So.

Redditors talk about how being 'pretty' can open doors for you. The discussion touched on the good and bad elements of being prettier than average. While most agreed that 'pretty privilege is a thing, they also acknowledged all the sexism and materialism that comes with it. 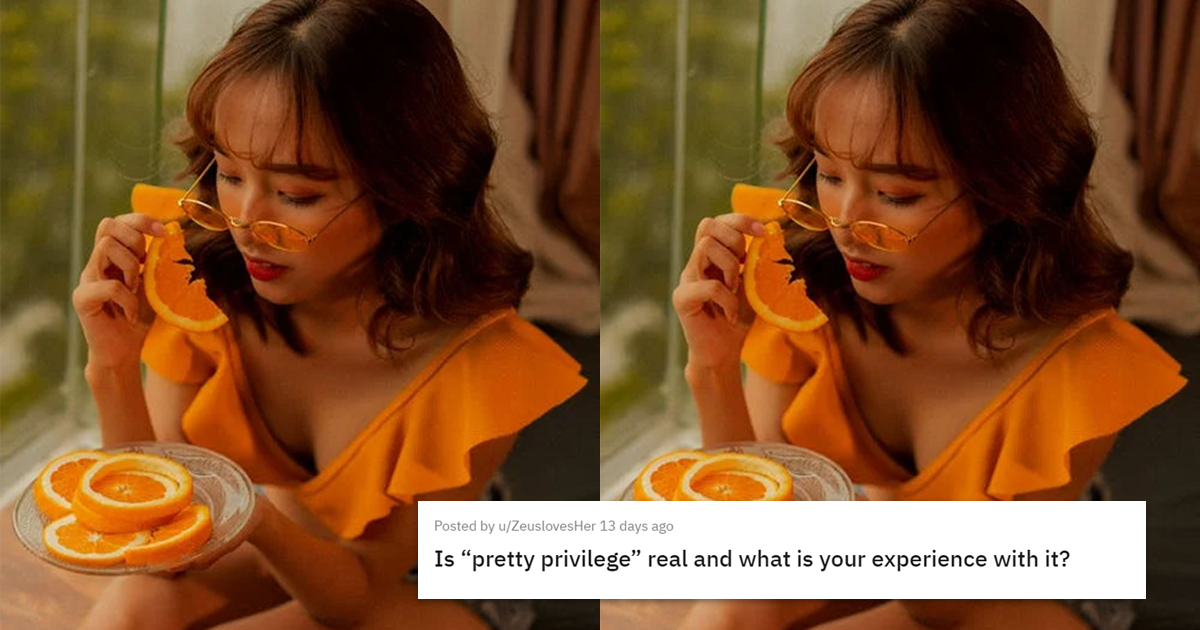 "Absolutely, the summer before my junior year I lost a ton of weight and when everyone saw me, I was 40 lb lighter than the previous year. I started getting more friends, teachers started talking to me more, girls were starting to notice me, etc. Now this could all be because I finally had my confidence up but it’s hard to tell.

The summer before my senior year I really dialed in and got into really great shape and that’s when I noticed a huge change. I was getting asked out by girls every other week until I finally got what would be my first long term relationship. Then I joined the Navy, gained maybe 20 lb in A school, and boom it was back to square one, no longer the guy everyone always wanted to be around."

For some, PP could be open doors for specific careers.

"Very real. Nightlife (bartending, etc) is good money, and they don’t hire people who are not at the very least conventionally attractive. I’ve been tipped generously many times simply because customers thought I was pretty. Mostly by gay men and straight women."

Traffic tickets are the most common test

It's almost a systemic problem

"Very attractive, or formerly very attractive, people are used to being listened to and will go on and on about anything. Also, I’ve worked at several universities and the better the school, the more attractive the student body. I assume this is because attractive people get extra attention and help from an early age. They expect and are expected to succeed early on."

This commenter recognised it and decided to put more effort into their appearance.

"I invest a lot of time and money into my physical appearance for this reason. It sounds easy to say that you don’t need makeup to be beautiful and caring too much about how you look is vain, but when you’ve lived part of your life ugly and part of your life pretty you really do see plainly the benefits in all areas of life. If nothing else, you gain a lot of self confidence and that translates to everything including career ambition.

Especially for people who lack in other areas of privilege, you hang on to this one."

For some, it led to a change in their world view.

"Big time it is. I was a very unattractive teenager and the world felt like a very harsh place. Some people are openly rude to you if they don’t find you good looking. As I did grow into my looks and became reasonably good looking, not heading down the catwalk or anything but nice enough, boy did the world open up. People (mostly men) became so much nicer to me and just much more accommodating. Pretty privilege is very very real, having been on both sides."

For this commenter it was a numbers game

"Yes. You get more matches on tinder, you’re more approachable, you have easier access making friends albeit they can be superficial friendships but friendships nevertheless. You are more likely to be recruited by model scouts, agents for the entertainment industry, it’s a lot."

Being attractive however also came with its own set of issues

"It's really fucking hard to do any successful therapy because of pretty privilege, let me tell you. I have BPD and because of it, I have done and said some pretty fucked up stuff. What is the response? Nothing that serious because look at me, I'm a cute and young-looking woman. I had one tell me, while I was having a breakdown because I've only ever been seen as "the pretty one" in my family: "I'm struggling to not tell you you're pretty, you're so beautiful!" I think she meant well, but not the time."

Some advantages however could not be ignored

"I know a girl that was completely terrible at her job but the boss loved her. Kept getting promotions, bonuses, raises, and things like that when raises were frozen for everyone else. She ended up leaving her company to work at a more prestigious company..."

Systemic issues such as these also lead to discrimination

"I was born with a facial deformity and have since had multiple (10+) procedures to fix it. Growing up, people would literally stare at me, walk to the other side of the street, openly laugh, etc. At 12, I was at the mall with a friend when one of those childhood modeling services ran over and started praising my friend, looked at me, then went "but you're both beautiful in your own ways."

Now 21, apparently I've had enough work done that people are able to look at me because everyone is nicer, takes me seriously, and I get free drinks when I go out.

Yep. People definitely treat you differently when they think you're attractive."

This commenter pointed out that privileges differed by beauty standards

"Among cultures where I fit into that societies idea of beauty, people just give me stuff for no reason or give me passes if I have flubbed some requirement. Upgrades on flights, meals paid for, etc.

In areas where my look is not considered beautiful (Miami, Florida lol) I have literally been denied entry into a club. It really sucked. But hey 🤷🏿

If you didn't piece it together, I have deep dark brown skin and stereotypically West African features. I was bullied pretty relentlessly throughout childhood, but that never really stopped me from liking my look. I did have pretty low self-esteem though.

When you are among people that think you are attractive, you are allowed to just live. If not, you find yourself being screwed with and denied access just because. I'm sure there is some element of this in many countries, but due to an especially narrow definition of beauty in the United States, it seems more pronounced.

BTW, there have been studies done on this."

For most the difference was apparent when their bodies changed

"When I was younger I was very thin/had a good body and people treated me sooo much differently than now that I’ve become a mother and gained weight. Nothing to do with confidence because I’ve never been confident even when I was thin lol."

This one learnt life lessons in icecream

"Yep, saw it with my own eyes back in school, I was in line for ice cream with a pretty senior in front of me and the ice cream vendor was like "You don't need to pay it's free for you."

Then it was my turn and was like, "Oh, she's the only one who'll get a free ice cream, cool." 🙂 Then proceeded to pay for mine. 👌"

For others, it put into question their own abilties

"I was actually told by my previous employer (of a large corporate company) I was only taken on as I was attractive and they needed a pretty face to bring to client facing meetings. It made all my hard work and effort seem overshadowed and worthless."

For trans women it presented a dichotomy of 'success' and 'failure'

"As a trans woman I gotta say that it is real. Depressingly so.

My experiences have been that even if people know I’m trans they are generally pretty nice to me in real life.

You can totally see this in how society views what is a “successful” transition. The trans women who are deemed to somehow always represent what it means to be trans are almost always not just Cis passing but totally conventionally attractive.

The trans women who don’t fit neatly into those categories get stereotyped as “failures”."

For some it was a career ender

"Went to college for theatre arts and have worked for both professional and community theatres; I can confirm pretty privilege exists, and it stings to know that the one thing separating you from the roles you want is how conventionally attractive you are. I've been villains, I've been comic relief, I've been background characters, but never a protagonist or a love interest."

"I'm female and I think it's real. There are two versions of me. One puts on makeup, wears contact lenses and looks clean and presentable in job interviews etc. The other one has bad skin, no makeup, wears glasses, sweatpants, running shoes and an old hoodie. I shave my head often, so my hair is either short or non-existent. People sometimes comment on how "independent" or "cool" I look because of it, but only if I look otherwise presentable. The other version of me gets stared at sometimes. I think it's because I'm very pale when I'm not wearing makeup, and people think I have cancer or something. I look like two different people. I wish I could post pictures, but I want to keep this account relatively anonymous.

Guess which version gets treated better, gets more smiles, better opportunities and so on? And people actually try to scam me more often when I'm not "pretty". I guess the pretty = stupid stereotype changes as you get older. Presentable older women are probably considered smarter. And I'm not even that old, I'm almost 40. It's weird."

This commenter thought, it also had a lot to do with attitude and confidence

"I think it's not so much about the looks but about your attitude. If you're kind and warm and smile a lot, people find you more attractive even when you're not that stunning."

This one acknowledged that perhaps the excessive lewd messages and overt attention was perhaps not as wanted as it seemed.

"I'd imagine pretty people have to deal with all kinds on unwanted attention. Doesn't seem like much of a privilege to me."

This commenter pointed out that winning the genetic lottery was the luck of the draw and there was no point in creating 'sides'.

"Some people get things in life easier than others because of their looks. It's luck if the draw. The only thing wrong with that, is the jealous guy that feels cheated. He's wrong. Why not be happy for the beautiful people. We don't get angry at a person because he won the lottery. Somebody has to be Clooney. It's not right to view a person negatively for being "ugly". Same is true for the pretty ones.

Also, just because some things come easier because of their looks doesn't mean they don't have to struggle or feel pain in other aspects of their lives just as much as anyone else. I'm sure Sco-Jo has seen plenty of heartache. Maybe I should comfort her."