Posted by Sama in News On 10th May 2018
ADVERTISEMENT

After being invited for dinner over by Israel's Prime Minister, things took an awkward turn for the Japanese Prime Minister and his wife when the visiting couple were served food in a metallic shoe. Israel has been called out by not only the media but also the public internationally for highly disrespectful and rude gesture and is criticised for treating the guests in such a way. 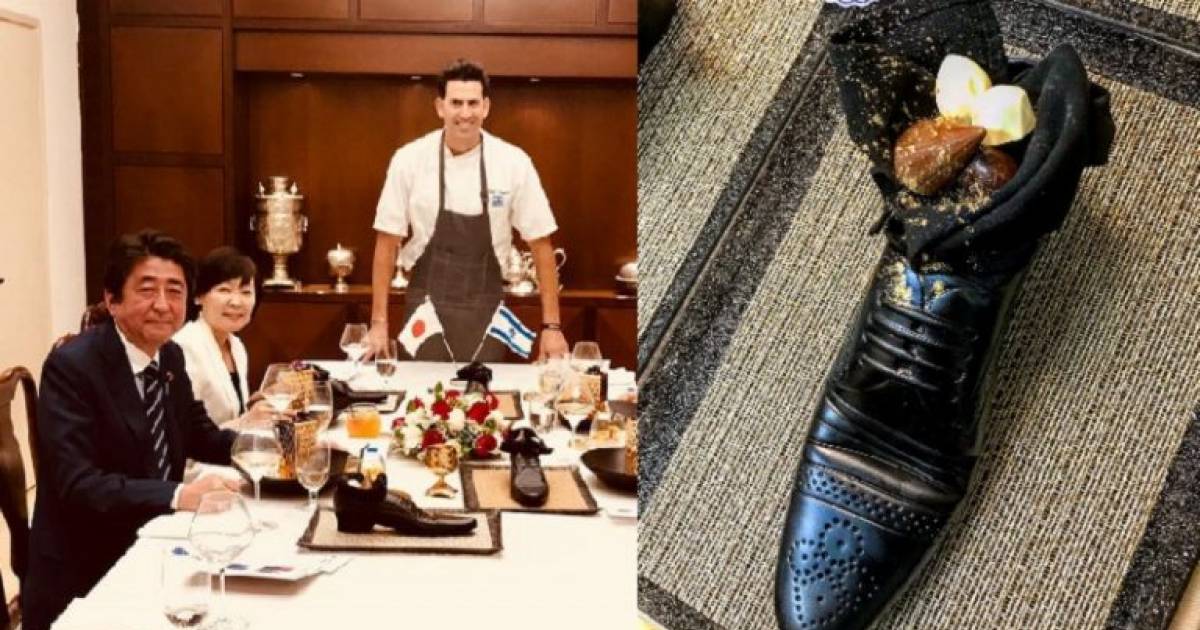 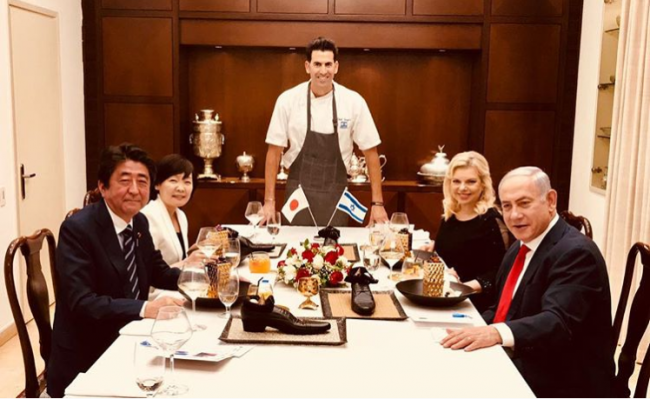 It was the second time, the Japanese Prime Minister was visiting Israel with his wife. The visiting couple were served a top-notch meal by celebrity Israeli chef Segev Moshe. The dinner at Netanyahu's place took an awkward turn when Shinzo Abe was presented dessert in what appeared to be a lace-up leather shoe. 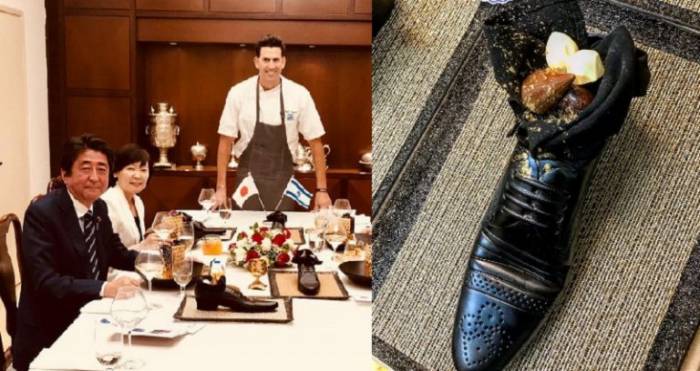 #3 The Dessert Was Arranged Artistically In A Metallic Shoe

The dessert included a selection of delectable chocolate pralines – artistically arranged inside a shiny leather shoe. The news came after Netanyahu complained about the lack of news coverage of Abe’s visit by Israeli media. The whole incident has garnered criticism from local media as outdoor shoes inside the homes are considered highly disrespectful in Japanese culture. Israel’s popular daily newspaper Yediot Aharonot wrote Monday that “Japanese diplomats, Israeli Foreign Ministry officials and high-ranking Israeli diplomats who previously served in Japan were shocked by the idea”. 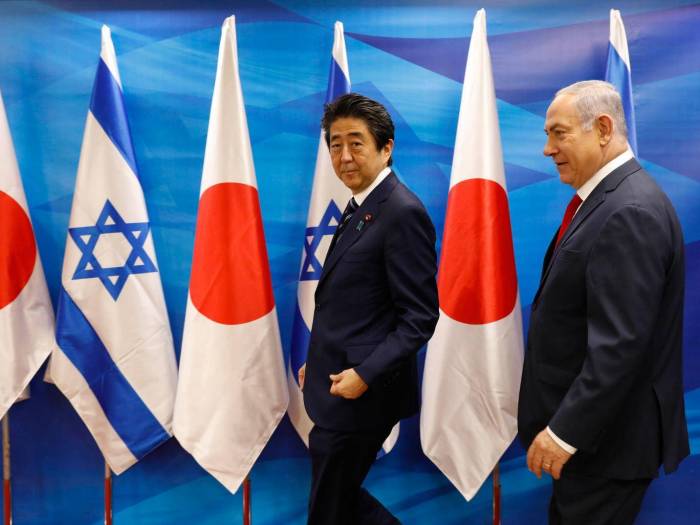 #4 Japanese Officials Are Highly Offended By The Insensitive Gesture

Reportedly Japanese diplomats and officials have given their disapproves over the incident and according to them putting a shoe on a table is considered disrespectful in any culture around the world. What was the chef thinking before he put it in front of the Japanese Prime Minister and his wife? According to them, they are highly offended on behalf of their Prime Minister. 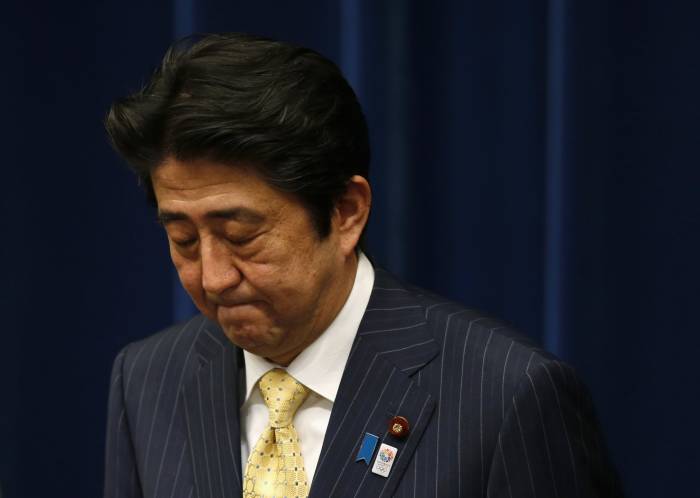 An anonymous senior Israeli high ranking official wrote "This was an insensitive decision. There is nothing lowlier than a shoe in Japanese culture. Not only do they not wear shoes at home, you also won’t find shoes in their offices. This is disrespect of the first order."

#5 The Japanese Delegate 'Enjoyed The Meal'

On the other hand, an Israeli diplomat at Japanese embassy commented that the dinner was a private affair and word is the Japanese Prime Minister and his wife 'enjoyed the dinner.' Israel’s Foreign Ministry said in a statement that it was not involved in approving the dishes for the meal. 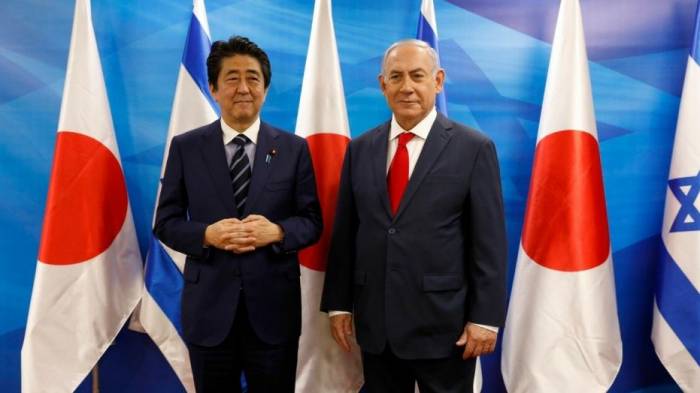 #6 Segev Is Famous For His Creative Ideas

In a statement released by the ministry, it said, "We respect and appreciate the chef. He is very creative." Celebrity chef, Segev is quite famous for his out of the box creative ideas and the man came into media attention when he served up a dessert in the shape of a double-headed Trump and Netanyahu, last May when Donald Trump visited Israel. 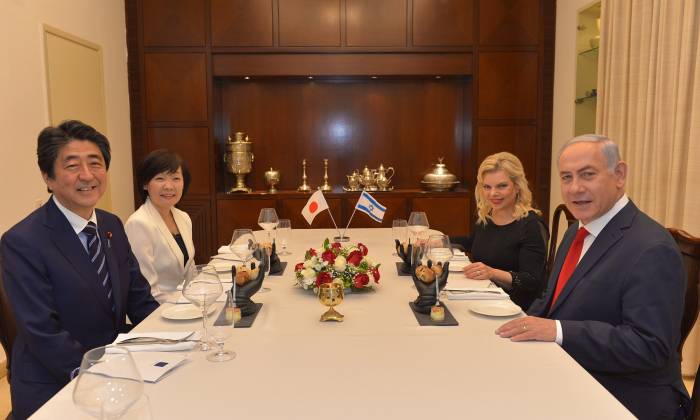 Segev on his Instagram account posted the picture of his art along with the details. According to the celebrity chef's publicist, the dessert was served in the metal shoe that was a famous sculpture by a famous designer, "The dessert was served inside a sculpture by international artist Tom Dixon, whose works are displayed in major museums around the world and for the first time was displayed in Israel at a meal. This is a high-quality piece of art made of cast metal in the shape of a shoe; it is not a real shoe." 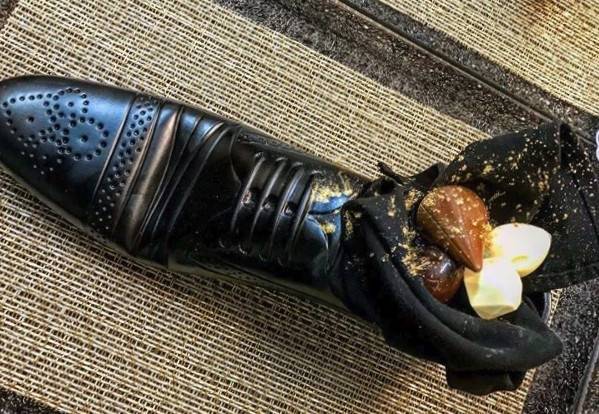 However, the incident has grabbed negative response not only from the media all over the world but also from the public who called out Segev and Israel for their highly insensitive and rude behavior. One person wrote, "When you cook at a diplomatic meal, the minimum you can do is inquire about the guest. In Japan, shoes are considered contemptible, they always take off their shoes at the entrance to every home, both for themselves and for others." Another one wrote, "you don’t need to know any culture to know that serving shoes at a dinner is WRONG!"