‘Karen’ Complains About Woman’s Emotional Support Dog In Front Of Her.

Posted by Annie N. in Cringey On 23rd August 2021
advertisement

A ‘Karen’ can be seen on video having a dramatic conversation about a woman’s service dog in the restaurant without caring that she could see and hear the entire hurtful and cringeworthy conversation. 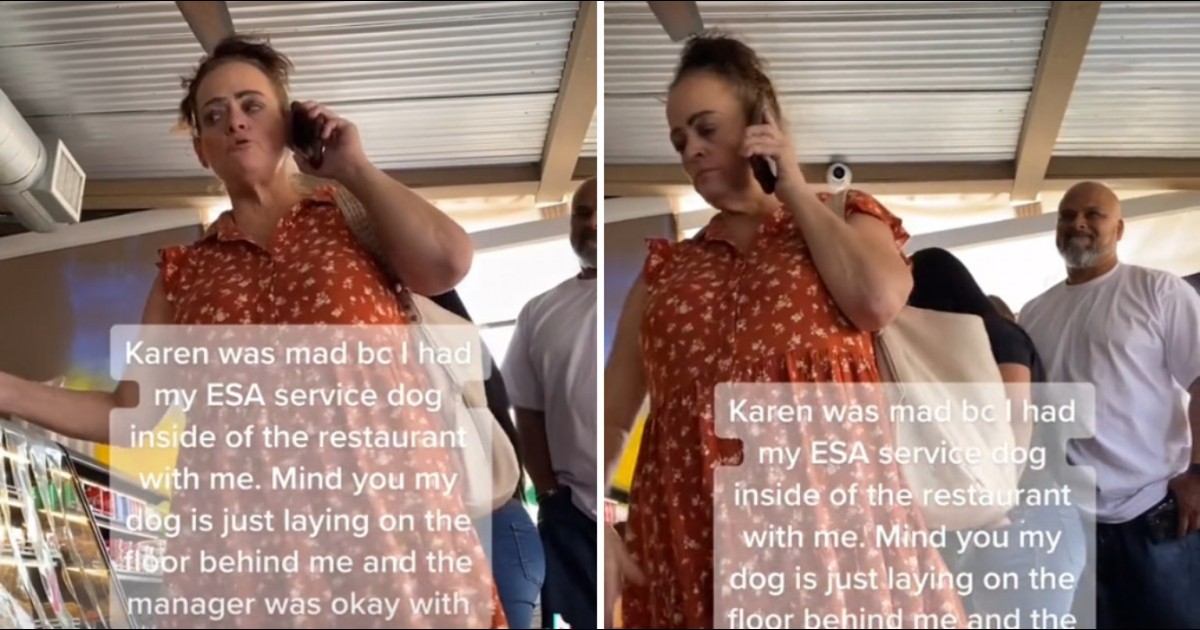 It seems like ‘Karens’ these days have found ways to press people’s buttons, even when they’re not directly interacting with them.

This particular one let her thoughts be known rather loudly while she was on the phone with an entirely different person without ever speaking directly to the person she was offending.

The person in question however was quick enough to record her having the whole conversation for her TikTok. 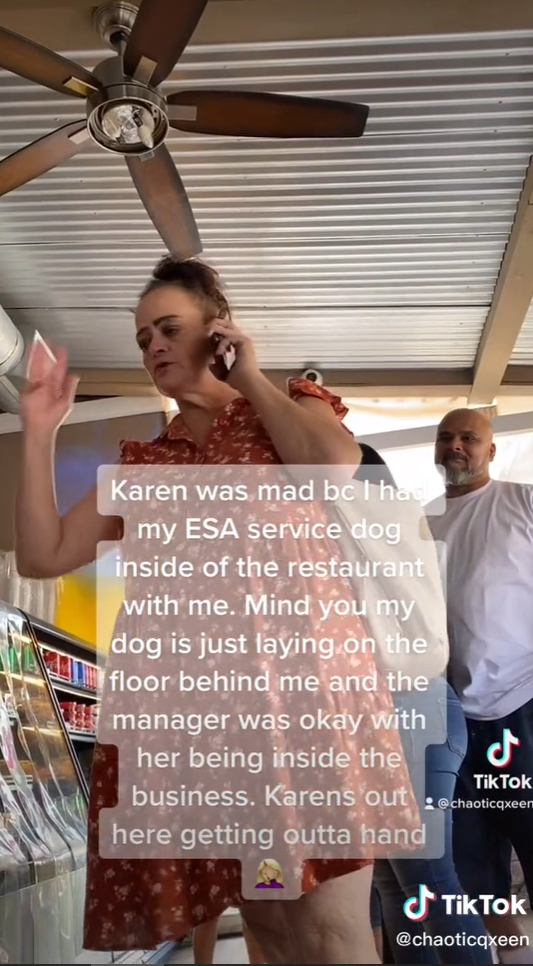 This Karen is supposedly on the phone with some sort of authority telling them that the dog isn’t supposed to be there and that they need to get animal control to remove him from the business.

“I’ve done extensive research on this and I know this dog’s not allowed to be here,” she says.

She then continues to say, “An emotional support animal is allowed to be in your house and an airplane, that’s it.” 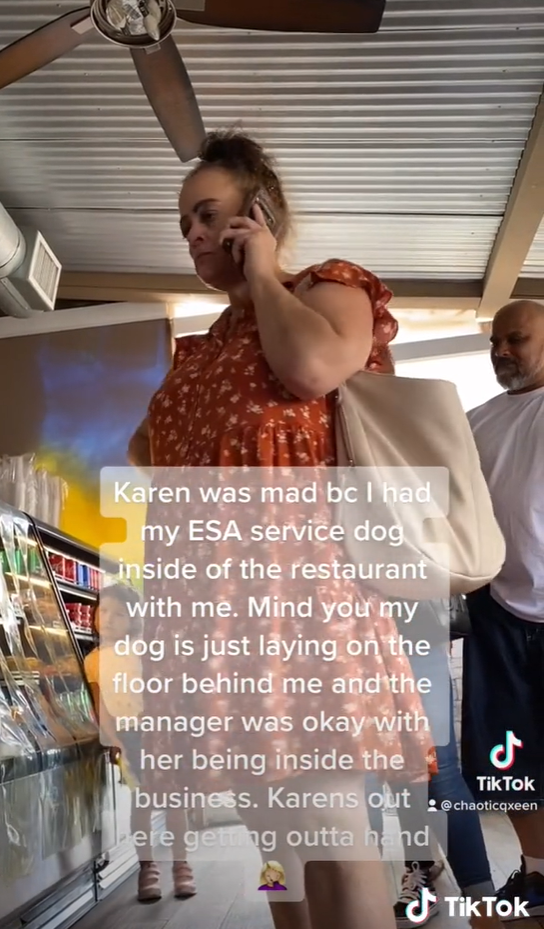 She is however incorrect in this regard as emotional support animals are allowed inside establishments based on the discretion of the owner. 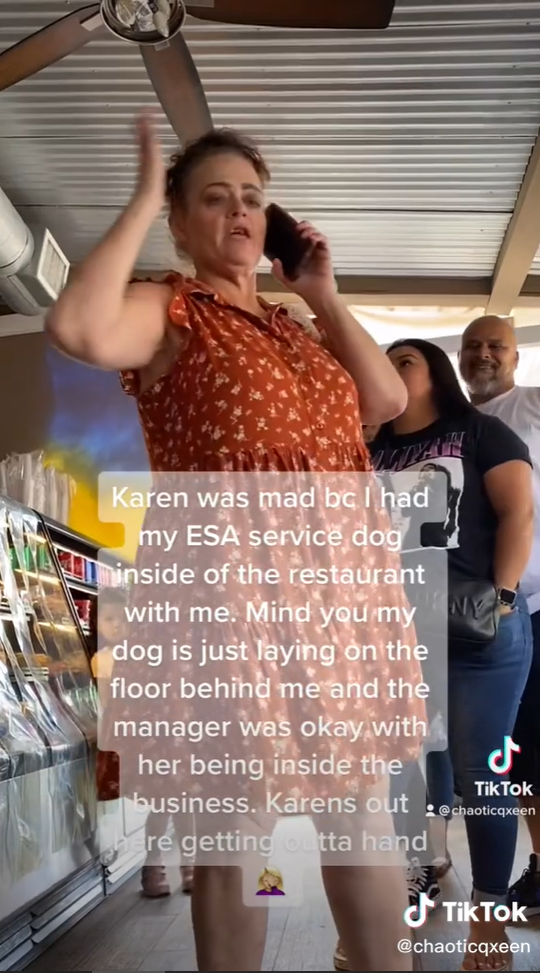 A bystander finally chimes in telling her, “Ma’am, if you have a problem, you should just leave.”

She however is not having it and says that she will be calling the police and not leaving. 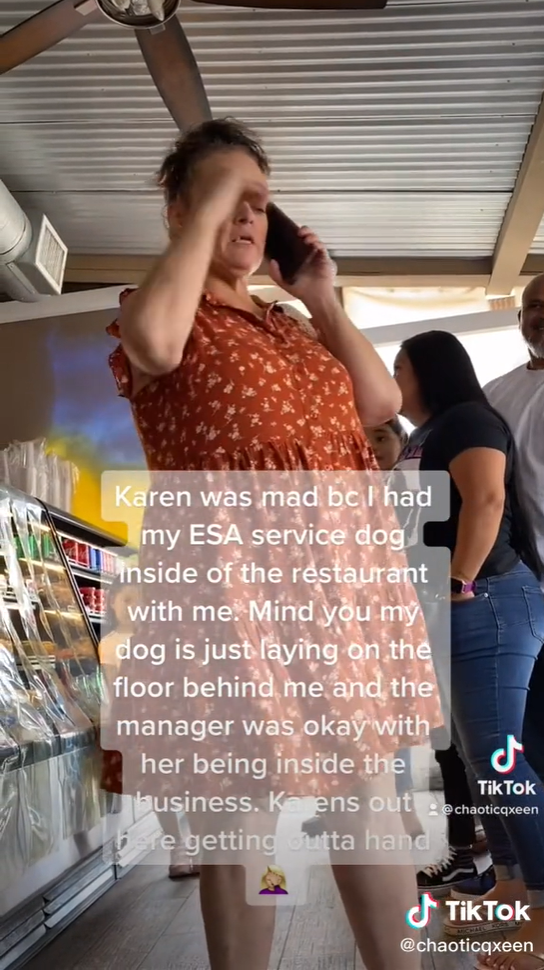 The video cuts out at this point and no further information or context is revealed. Erika later turned off commenting for the video as well.

The video then made its way to Reddit where people were mostly annoyed by the woman's body language.

"Her thigh slapping was irritating."

Another pointed out that considering her temper, she might actually benefit from an ESA herself.

"She is slapping the shit out of her thigh. She might need something, maybe a dog, to help calm her down."

One commenter however decided to shed light on the confusion between ESA and Service dogs and that while the woman's reaction may have been over the top, there was a possibility that she may have been accurate.

"ESA are not service animals. Airlines are now starting to ban ESA animals. This is due to selfish people who falsify their pets. This takes away from people who truly depend on ESAs."

Another user shed further light on the subject and said that the misuse of ESAs and service animals abuse a system designed for those that actually need it.