Posted by in Cringey On 20th August 2021
ADVERTISEMENT

This TikTok video shows this man having a complete meltdown after he was refused entry onto a cruise ship headed to Aruba after he failed to show proof of vaccination which was a pre-requisite for entering the ship. 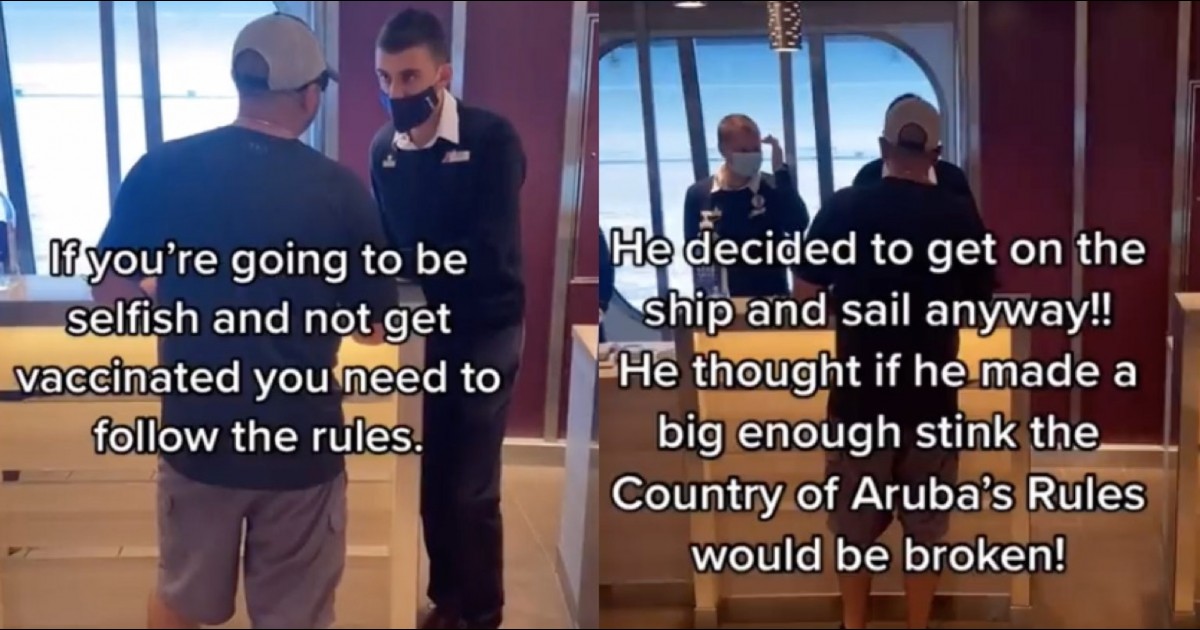 ‘Karen’ and now ‘Male Karen' tantrums have now become so common they’re soon to become their own category on TikTok. Yet another video of a man has now gone viral as he argues and disrespects cruise ship representatives for not allowing him to board a cruise ship because he’s unvaccinated.

Aruba’s laws dictate that anyone without a vaccination will be denied entry to the country. @guadgoes was there to record the entire incident.

Entitled anti-vaxxer throws a tantrum on a cruise ship after being rejected in Aruba pic.twitter.com/bhpnhPhw4N

OP starts by saying, "Let me tell you the story of this UNVACCINATED Karen who thinks it's OK to SCREAM and ABUSE this wonder guest Service Representative!!!" 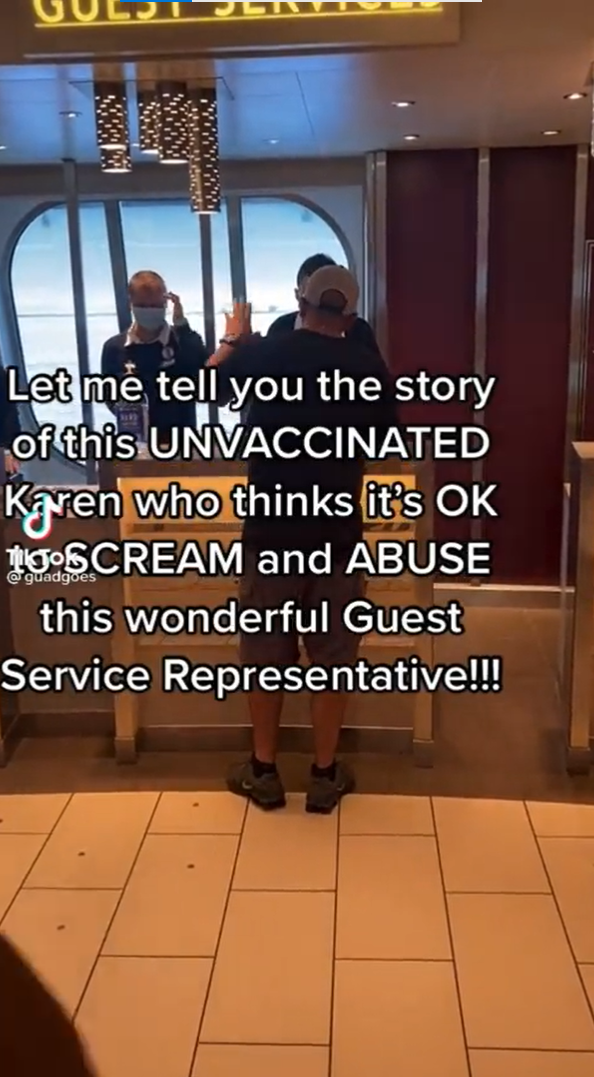 He provides context which the employee also attempts to explain to the 'Karen', that the laws are in fact put by Aruba itself and not something they can just let slide. 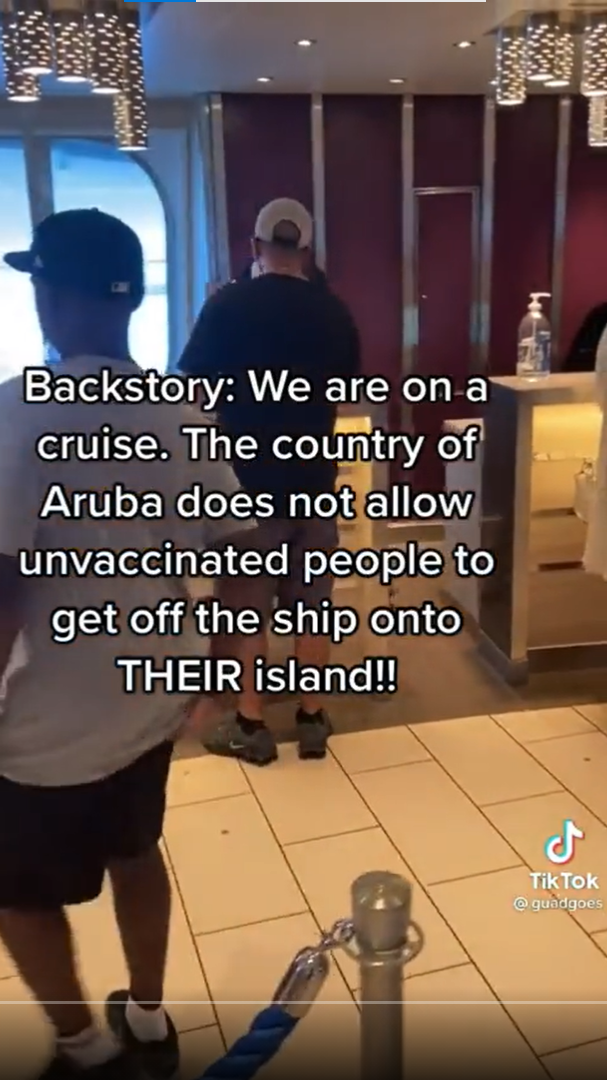 This information was also repeatedly provided to them at multiple points of communication so guests could come prepared. 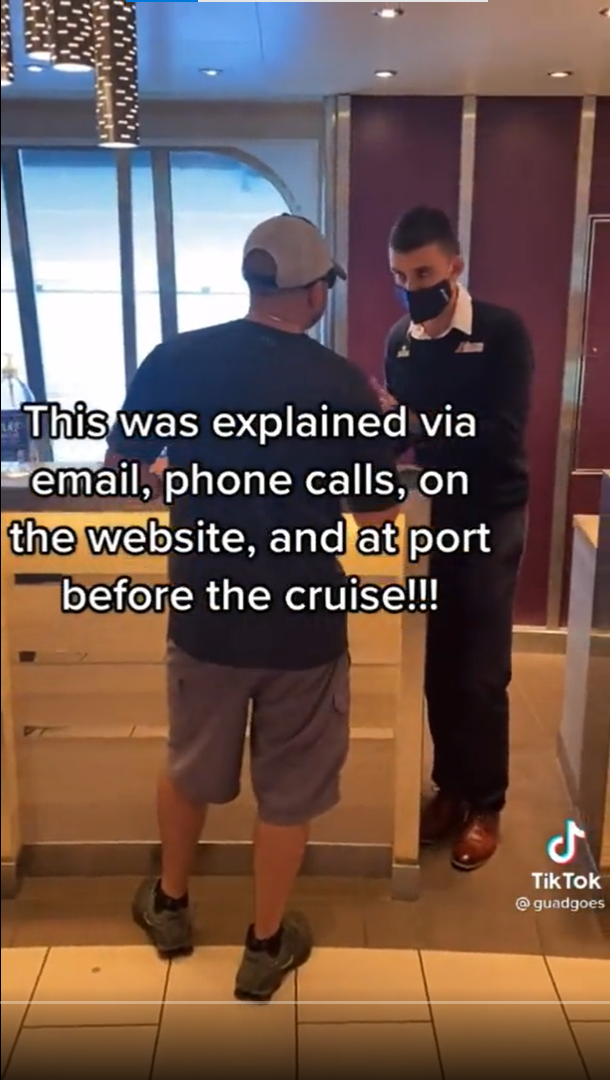 They even offered a 125% refund for those that wanted to pull out as a result of these policies. 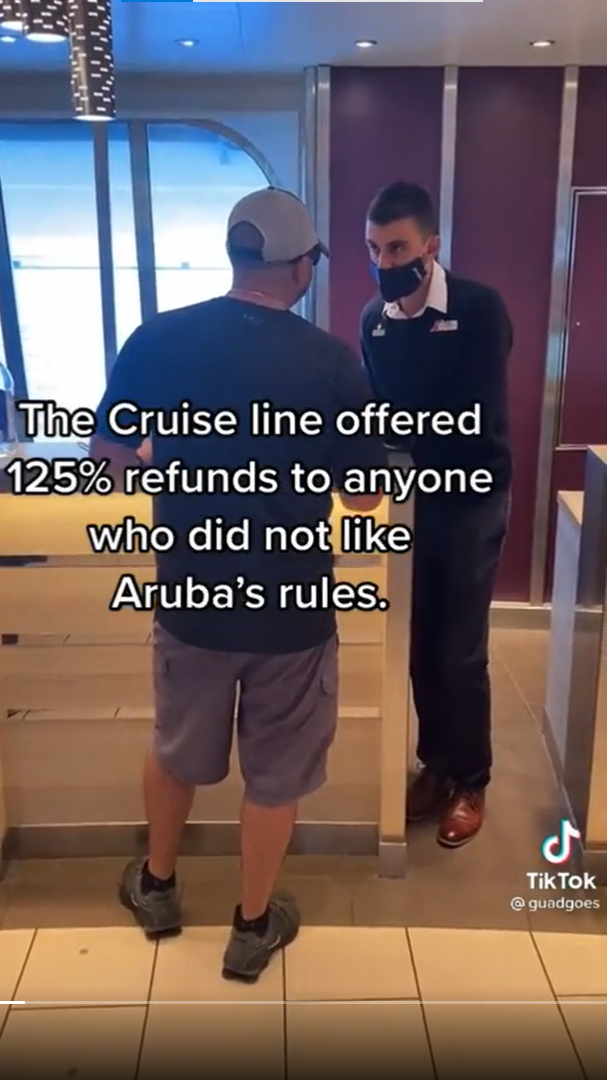 This 'Karen' however ignored all these signs and details and with all his entitlement decided to show up and demand entry onto the ship.

Very soon after being told no, he proceeded to have a complete meltdown and began screaming and arguing. 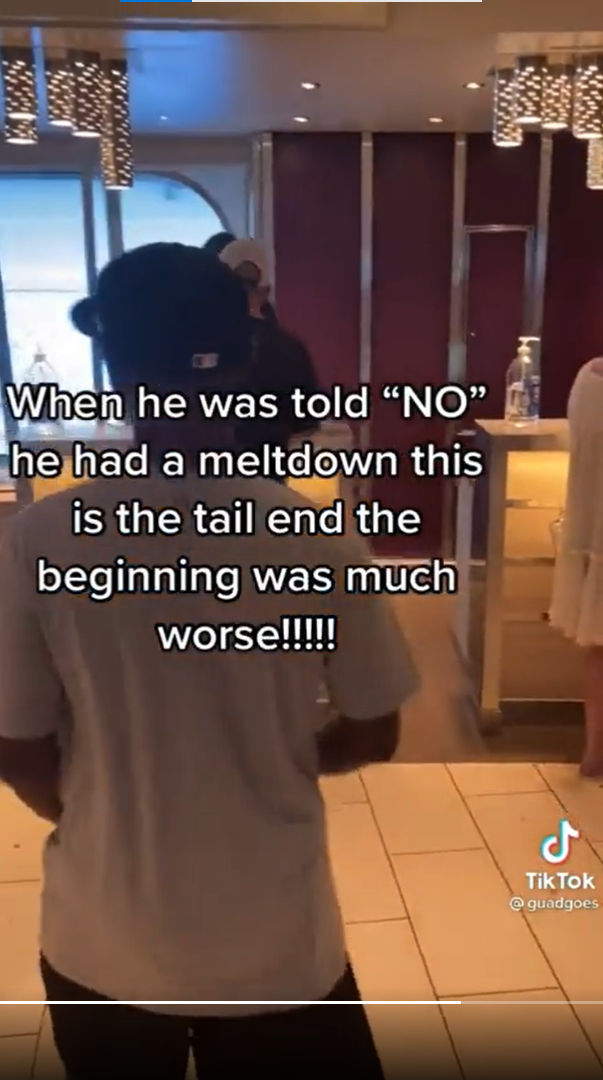 OP said he was disrespectful of everyone around him and that his sense of entitlement was appalling. 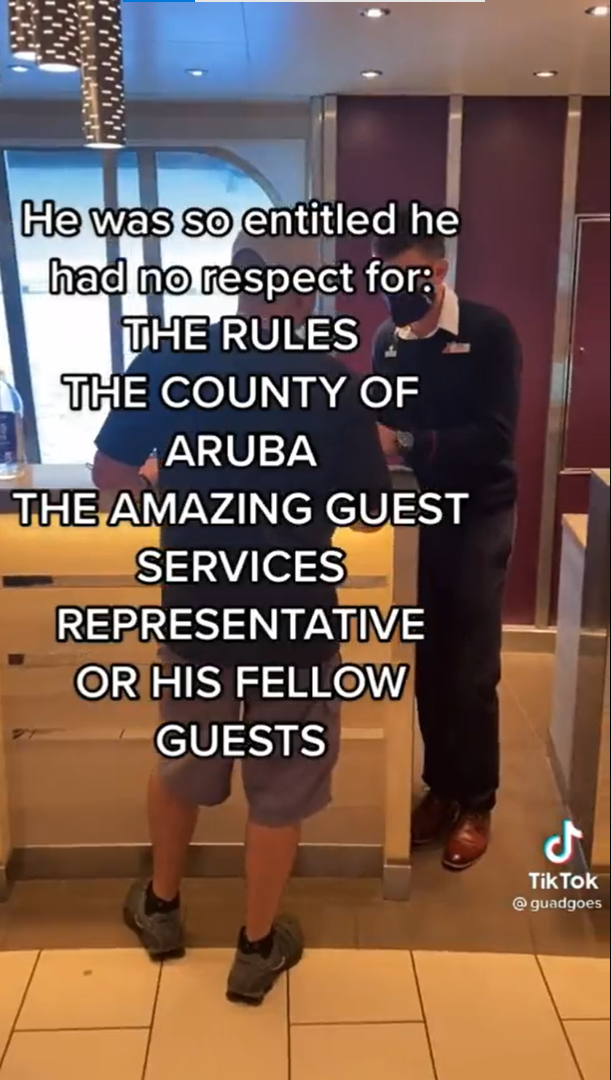 “If you’re going to be selfish and not get vaccinated you need to follow the rules,” 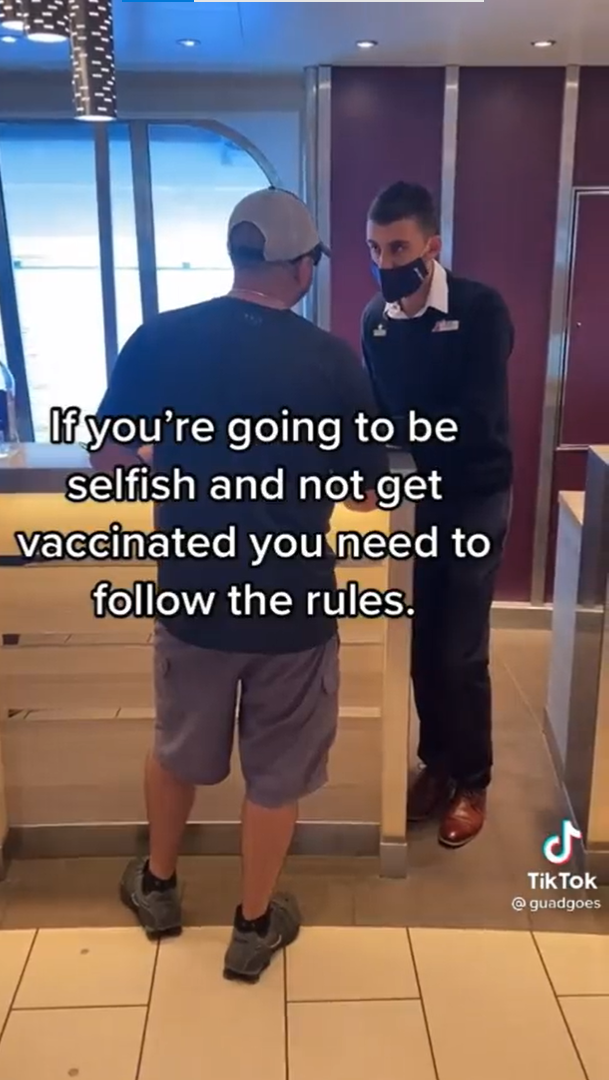 @Chrisflying, a flight attendant added his own two cents saying this sort of stuff happened all the time. 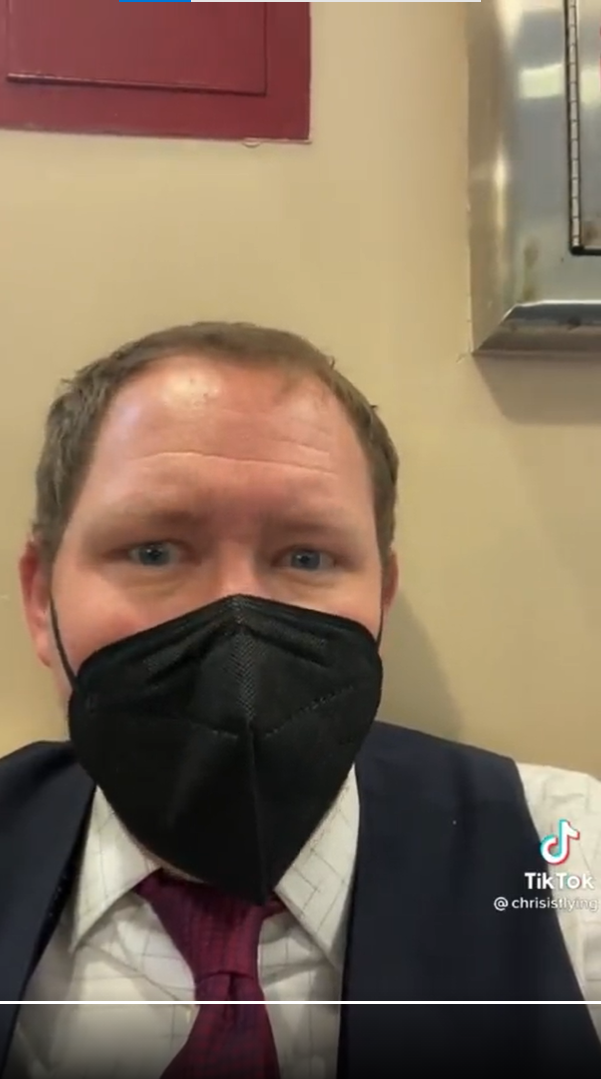 This commenter who worked on cruise ships further added that this sort of behaviour was prevalent among American passegners.

"I used to book cruises and seriously, some Americans should not be issued passports. I had people I booked mad that they took an Italian cruise on an Italian cruise line and the crew didn’t speak English..🤷‍♀️🤷‍♀️"

I was just going to mention something similar. I saw an American complain that a waiter didn’t speak English in Guatemala.

Commenters were also angry that situations such as these are allowed to escalate to this point because of vague guidelines and capitalist practices.

Ultimately, we hope the cruise ship employee was able to get a much-needed drink after this.

They allow them b/c fkn DeSantis fines the cruise lines if they don’t allow unvaccinated passengers to sail (which was unfortunately held up in court). I’m am 100% certain these passengers are told in writing & verbally upon check-in that they are subject to port country rules.