Man Bashed For Complaining About Waiter's Tip After Spending $4,8OO On Burger And Champagne Dinner

This guy was put in his place by Twitter after he took to social media to rant about how he and his companions were forced to pay tip to the waiter after having a meal worth thousands of dollars. However, the internet was taking none of it and was quick to slam the guy for being so petty and low.

This financial trader who posted a photo of his receipt after a hearty meal complaining about having to tip the waiter in Marbella, Spain has backfired badly.

The guy thought that he will actually get sympathy votes after ranting about giving tip to the waiter when he splurged thousands of dollars on his one meal.

Enrique Moris shared the image, and his angry rant, after he was allegedly forced to pay both a service charge and a tip following the eye-watering lavish dinner.

Moris claims that he and his group of seven men were all set to leave the restaurant after paying the service charge when a waiter came rushing to them asking if they were going to leave a tip as well.

“Marbella [is] the new Ibiza,” he tweeted in Spanish. “Fraudsters everywhere.”

The post went viral on Twitter and people on the internet couldn't help but show their bafflement at the guy's public admission.

They were shocked how the guy has spent lavishly on the meal, which included Wagyu beef burgers, tequila, and two €1,000 (£854) magnums of Dom Perignon but acting so low when it came to tipping the waiters.

“You’ve spent at least ten pensions on a dinner of bloody hamburgers and now you want what? Solidarity?” one commentator wrote. 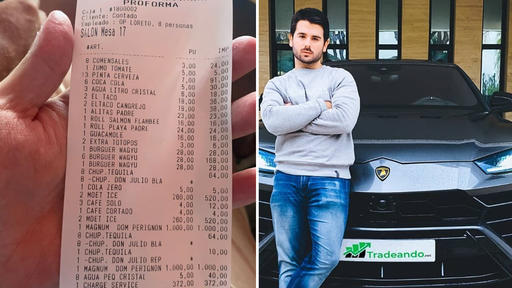 Even Burger King, Spain, couldn't help but join the act, joking that it would soon be serving champagne on tap in its Marbella branches.

Meanwhile, another user pointed out: “The service charge goes to the club. You should always take care of the waiters if they’ve treated you well.”

After facing much bashing and embarrassment from the public, Moris took to Twitter to update that he and his companions did in fact, leave $230 in the end but “didn’t feel the need to publicize it”.

As if the situation did not land him in hot water, the guy in a follow-up tweet posted a look at the financial markets, bragging that he managed to pay for the entire meal in just ten minutes thanks to his investments.