Man Finds Tiny Baby Frog In His Salad Box, Raises Him And Gives Him Snacks And Bath

Posted by Sama in Cute On 10th January 2022
advertisement

Simon Curtis struck a unique bond with a baby frog in the salad box he bought. He not only gave him his own space to live but also bathed him and gave him tasty snacks to feed on. During all the drama with Tony, the frog escaping twice, Curtis continued to update Twitter with his ongoings and now we can't help but root for the duo to continue with their friendship. 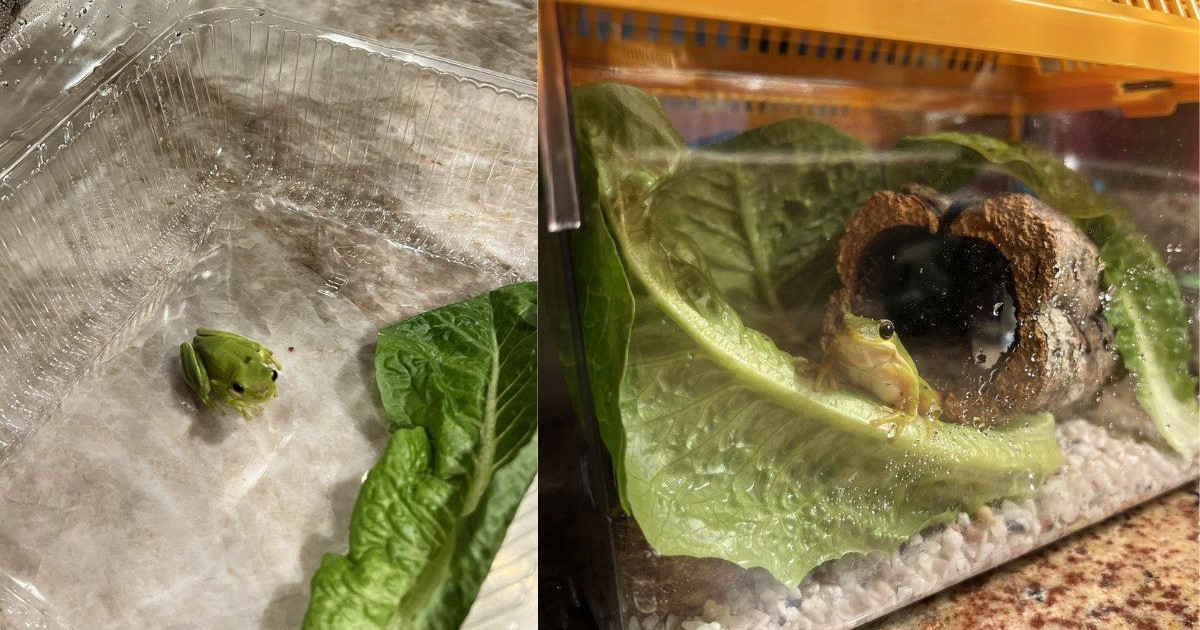 Simon Curtis, a recording artist, author, and actor has gone viral on Twitter after he posted a thread on his account sharing the journey of a baby frog that he miraculously found in his salad box - and now he is raising the frog and giving him snacks and baths. He has named the tiny adorable frog Tony.

In his initial tweet, he mentioned encountering the frog and asking the internet for tips on how to keep him safe from harm. 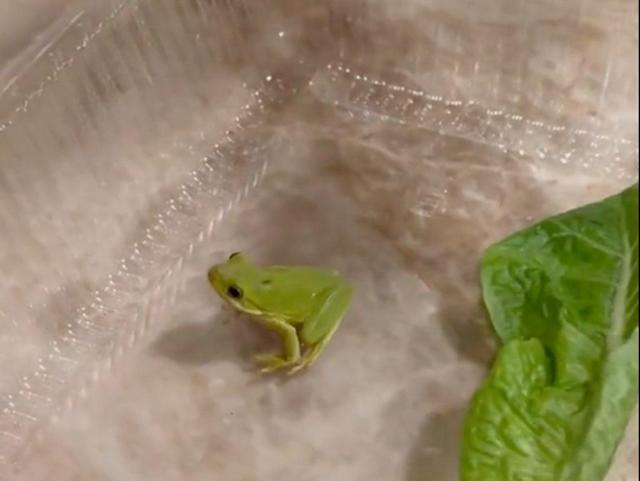 “I found the cutest little frog in the bottom of my romaine lettuce tonight- it’s too cold to set him outside (27 degrees), but he’s been living in the lettuce in the fridge for several days now- does anyone know what I should do so that he doesn’t die?” he captioned the first post. 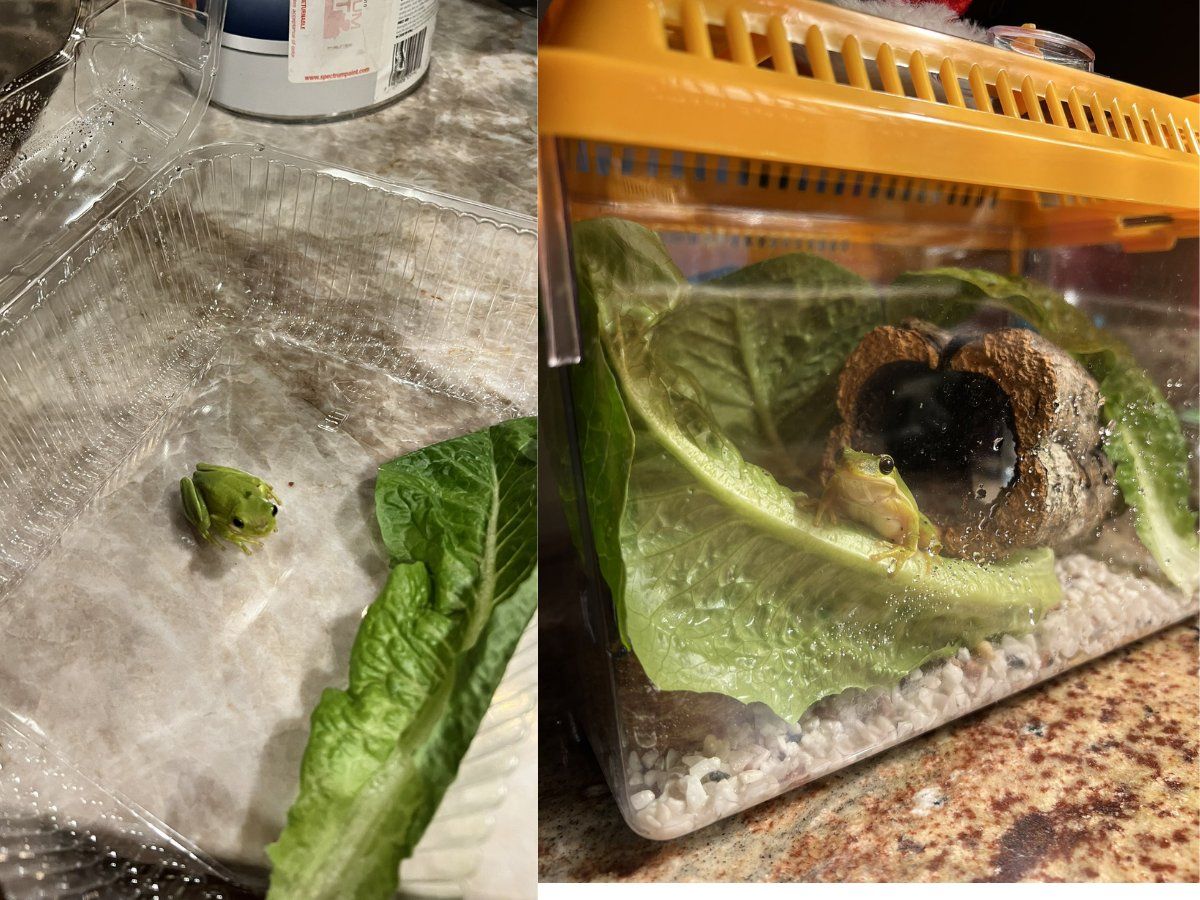 Curtis told his followers who were closely following how the story between him and Tony was unfolding that the frog was “hopping and clearly well.”

Back in the fridge until it warms up outside tomorrow? He’s hopping and clearly well and I bought this lettuce like four days ago… he’s so adorable I really don’t want him to die. Any advice at all will be very appreciated!

It’s also worth noting that Tony seems to have a sweet disposition as he lets Curtis hold him.

he’s so adorable is this my starter Pokémon? 😰😭🥺💖 pic.twitter.com/knyhnCyqk0

In another tweet, he said that he put the “remaining lettuce back inside” the box and gave the frog a “mason jar lid of water, and sprayed the entire container down with water.”

update: put the remaining lettuce back inside, gave him a mason jar lid of water, and sprayed the entire container down with water. Going to leave him here in the kitchen tonight and then figure out what to do with him tomorrow. His name is Tony 😌💖 pic.twitter.com/0N67qDu7Pg

While Tony was thoroughly enjoying his new home and the tasty snacks, he got the chance to escape.

But luckily, Tony was found chilling outside of the box and on top of the door frame in the house.

Here is his lettuce container on the counter, and here is where I found him (up on top of a high ass door frame) pic.twitter.com/jE0ohSVXJo

Tony also got to take a bath in a mason jar lid.

and he just lets me hold him 😭💖 pic.twitter.com/NxJ53HwJKD

In other tweets, Curtis updated that he has spoken to Mark Howery, the Senior Wildlife Diversity Biologist at Oklahoma Department of Wildlife Conservation” who was able to identify Tony as a “green tree frog.”

Just spoke to Mark Howery, Senior Wildlife Diversity Biologist at Oklahoma Department of Wildlife Conservation, and was able to confirm that Tony is indeed a green tree frog…

Curtis further added that he got “live wax worms” to feed Tony.

sending @j_h_o_r out to get some live bugs for him to eat (I’m in Moderna booster recovery today), as I will need to keep him inside for the next couple of nights until temperatures rise enough for him to be released on Thursday or Friday

Talking to Indy100, Curtis said that he is still not able to decide whether he should pet Tony or not.

“I’ve developed a tremendous amount of affection for him, he feels like such a little miracle, but I also don’t want to deny him the chance at the life in nature he didn’t get to have,” he said.

Tony update! Just got some live wax worms. About to feed him 🥺

He shared that the decision to keep Tony will be based on the weather too.

“I’ve consulted with the senior biologist from the Oklahoma Department of Wildlife, and the main concern is making sure there is a window of warm enough days to allow him to burrow and properly hibernate for winter.”

Curtis further added that the weather in Tulsa, Oklahoma is “unpredictable.”

“I truly won’t know until tomorrow [Friday] when I see if it’s actually warm enough.”

“I just want him to be happy and healthy, that’s the most important thing!” he added.

The things we do for love… pic.twitter.com/KAurWdJJKv

As per The Center Square, an Illinois study found that frogs have the highest chance to turn up in a bagged salad than any other animal.

Daniel Hughes, a post-doctoral research associate in the Department of Animal Sciences at the University of Illinois, noted that of the amphibians found, 60 per cent were tree frogs.

Apart from this, Lizards, snakes, birds and mice can also be found in produce.

He got in his little mason jar lid bath 🥺 pic.twitter.com/61PeKBjWbl

I’m still looking for him. Clearly knows this is a Bravo household as he is well versed in DRAMA

In another series of events, Tony managed to escape again.

Charlotte, the baby chihuahua, is on the case… pic.twitter.com/82M7KU9UIb

Fortunately, Tony was found hiding in the shower and “covered in dust bunnies.“ Curtis worried he’d passed away.

“He was so dehydrated and shriveled I was worried he’d died, but he’s now immersed in distilled water, cleaning himself, and coming back to life!!” Curtis wrote.

Got the ladder out to investigate all of the garland and high spaces… Tony is pulling Jenna Maroney-level attention seeking tactics pic.twitter.com/vfiHC49lCG

For the moment, it seems that Tony is having a good time. He even apparently had had a “third escape adventure.”

hiding in the shower, covered in dust bunnies… I don’t know WHAT this little guy has been up to pic.twitter.com/shUYxm9Rz4

he was so dehydrated and shriveled I was worried he’d died, but he’s now immersed in distilled water, cleaning himself, and coming back to life!! pic.twitter.com/GwUm9ndP4i

Tony, graduate of the Royal Tampa Academy of Dramatic Tricks, is safe and healthy (and will have a proper terrarium in about twenty minutes when I get back from Petsmart 😌💖) pic.twitter.com/0VKlNo7L9O

Curtis made a poll on Twitter asking people if he should “keep Tony as a pet or release him.”

I’m VERY torn- do I keep Tony as a pet or release him tomorrow? (Worth noting, there is a string of abnormally warm days beginning tomorrow, which will give him ample time to get acclimated and prep for hibernation).

Back at Whole Foods… checking the box this time pic.twitter.com/shMPDFE4GU

Despite all the adventures, it seems like Tony is enjoying the attention he is receiving and might as well live with Curtis for life.

(and apparently he had a *third* escape adventure when @j_h_o_r gave him fresh water while I was at the gym/out picking up Tony supplies 😹) pic.twitter.com/yJpG7VZMHm