Posted by Sama in Funny On 6th November 2020
ADVERTISEMENT

This man's coworker was so impressed by his grand way of exiting his job that he decided to put a picture of his epic resignation on Reddit. The most interesting part is that the person who posted the picture on Reddit, added the caption, "To top if off, this guy is a 50+ yo grump with anger management problems. Looks like he found a health[ier] outlet for his anger." 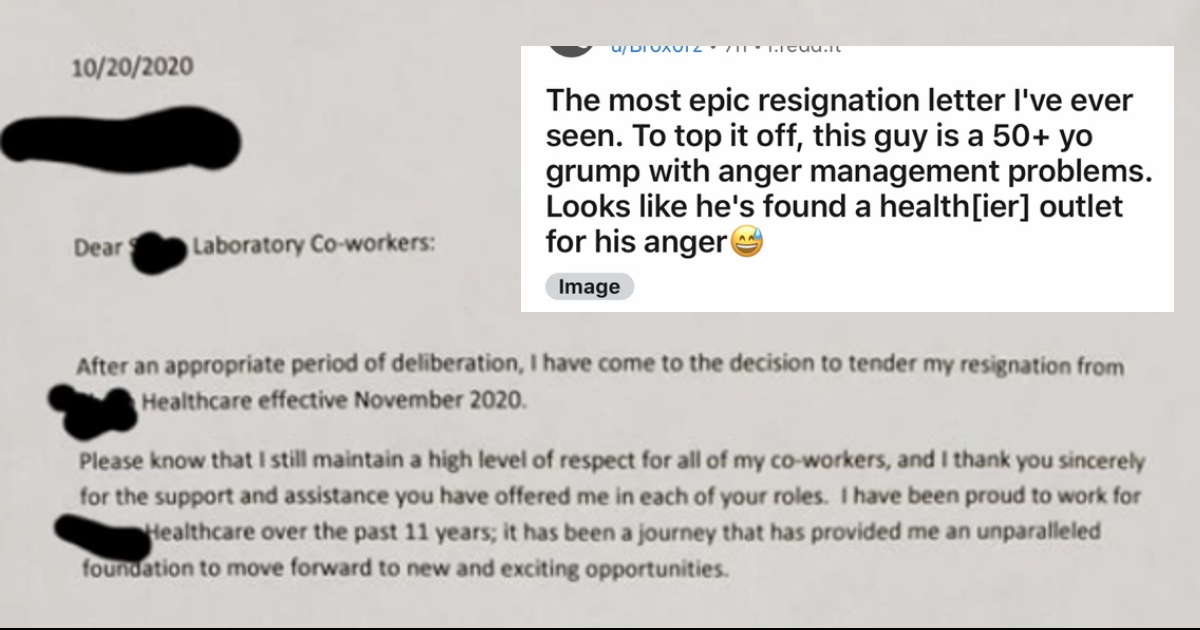 Doing a job of your own liking can be a really stressful thing. It can be strenuous and definitely dragging. But with the situation of economies, it is the most difficult time to switch careers. One has to think long and ultimately end up stuck in their careers for a long time.

However, whether you agree or not we all have thought of at least once in our life of a grand gesture of giving up on our jobs something with a grand exit, and now there are some people who actually put themselves to the fire, pull the trigger, and quit their jobs. And this man who worked in a medical lab decided to do so in a pretty awesome fashion. 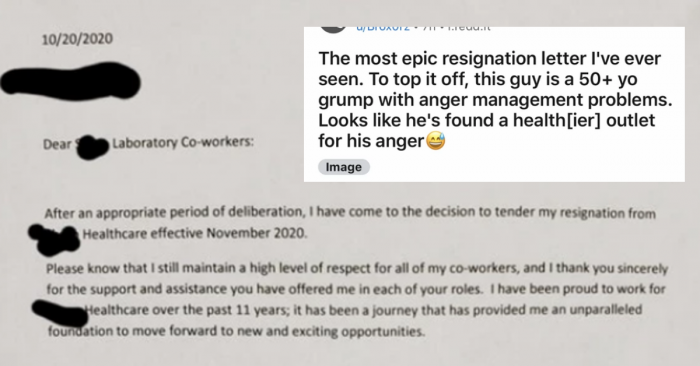 A coworker of the man was in awe of the man's work and decided to put the picture of the resignation on Reddit.

What makes it even funnier is considering that the person who posted it wrote, "To top if off, this guy is a 50+ yo grump with anger management problems. Looks like he found a health[ier] outlet for his anger."

The best part of the letter? It starts normally with cordial things the next moment jumping ship, not burning any bridges, and giving pleasant words to his (now) ex-coworkers.

But oh wait...this is to only set the punch line! 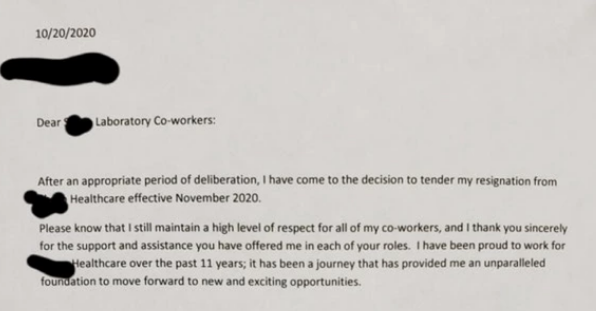 The man who belongs to a medical lab decided to let go of his job and become a professional pirate. "It has always been a dream of mine to live the life of a swashbuckling corsair, beholden to none and master of all I survey."

He added, "Once my crew of unabashed rogues is assembled, we shall take to the capacious expanse of the high seas to pursue fortune, fame, and hair raising adventure."

People who read the letter online were in complete awe and then someone brought up that it's the Pirate resignation letter, and someone mentions that they used the same one in 2012 and "it helps if you're on good terms with your coworkers."

While everyone was applauding the man's approach it turns out that "The Pirate Resignation Letter" is actually a thing. 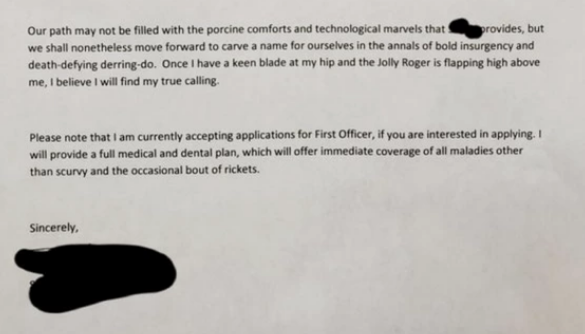 Popehat wrote about it back in 2008, and it could've existed even before that. It feels like a piece of long-forgotten internet lore so while it may diminish people's respect for the man considering the letter wasn't exactly an original idea he conceived of himself, it's still pretty darn awesome. 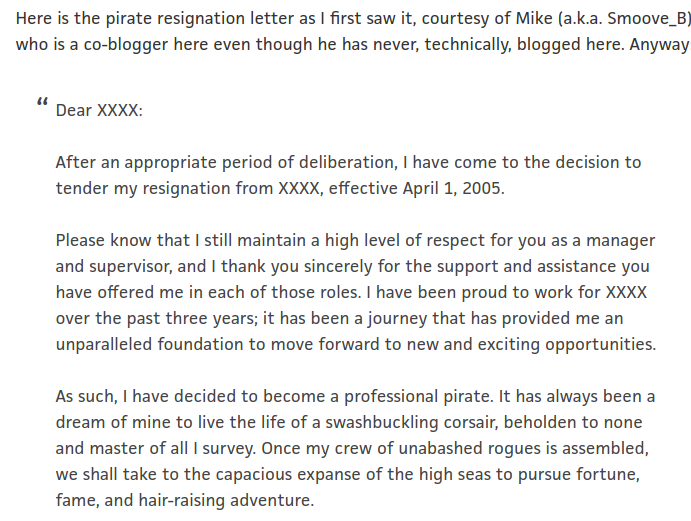 Eventually in response to this letter, the founder of Popehat decided they would come up with his own employer response to anyone who decided to use the Pirate Resignation letter against them. 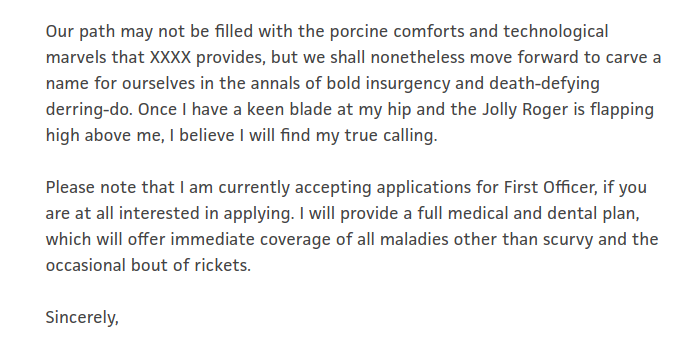 Well at least we learned one thing today, the idea of 'pirate resignation letter' is a real thing. So whoever is thinking of switching careers, maybe this approach looks interesting? 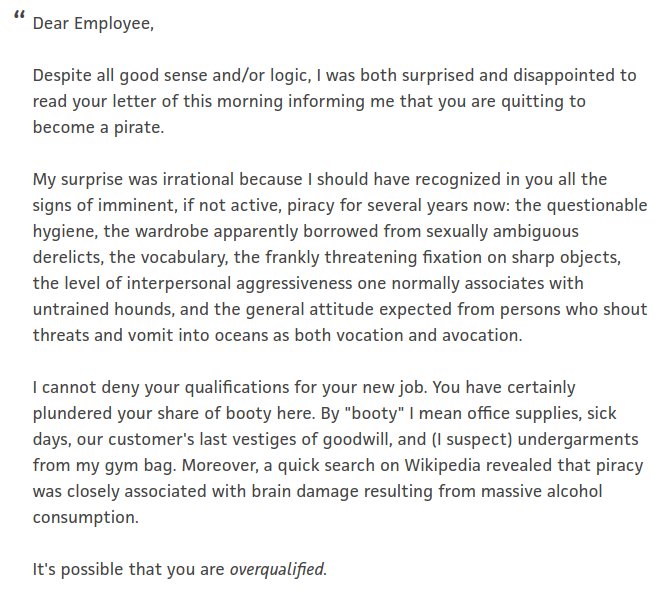 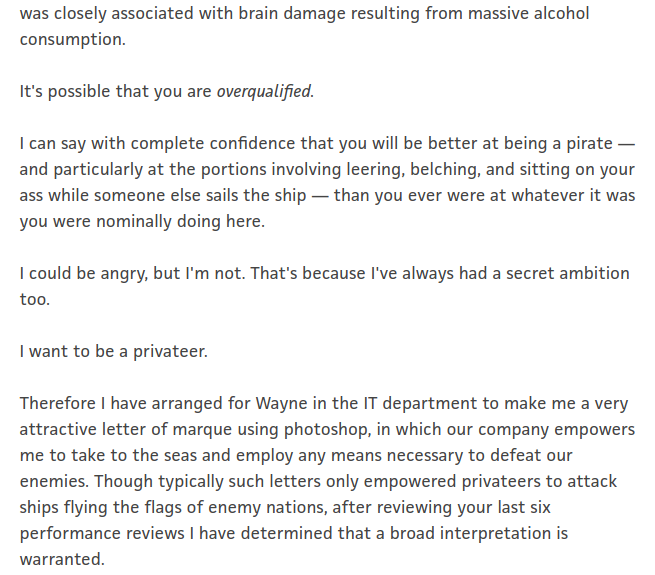