Man Live-tweets Interview With Company That Just Fired Him

A man who was fired from his job was given an interview at the same place. He decided to document the events of the interview in a series of hilarious live tweets. 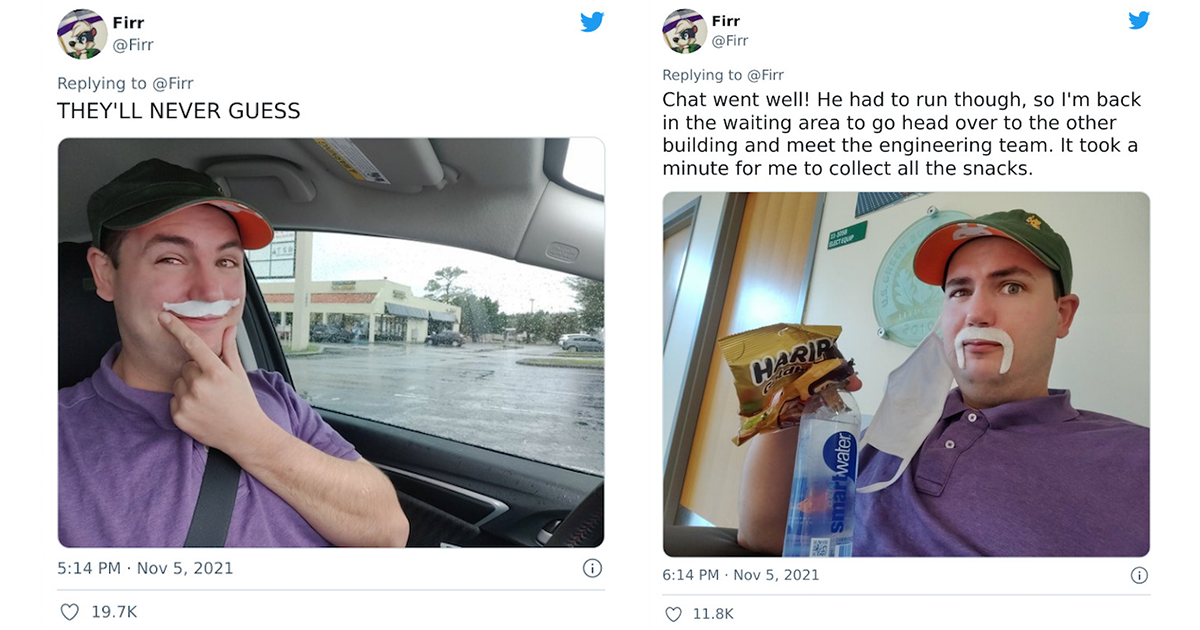 Imagine losing your job only to get called back to interview for it.

A normal person would shake their fist at the universe, ignore the alignment of the stars and move on. Not this guy. He thought the best way to go about it was to attend the interview and live-tweet it for the amusement of the world. Thank you for your sacrifice, sir! 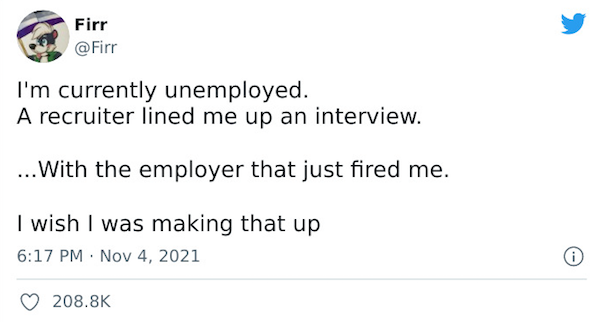 @Firr on Twitter thought he was super lucky to have found an open position so quickly after losing his job. The opening however was because he was the one that had left it. 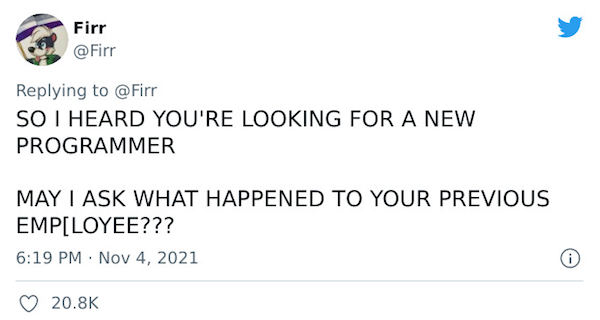 After a few funny tweets about the matter, the universe decided to play ball and actually landed him an interview. 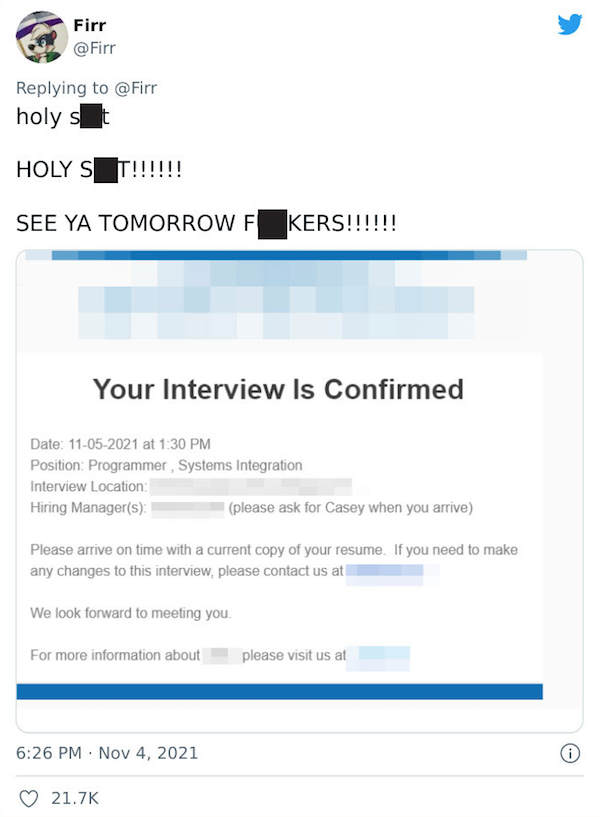 Firr could not believe his eyes and he was ready to go face to face and do a smug victory lap. The best part was that he took us along for the ride.

He then asked the most important question. Disguise or no disguise? Or should he dress up in his old uniform and show up like he was never fired at all. 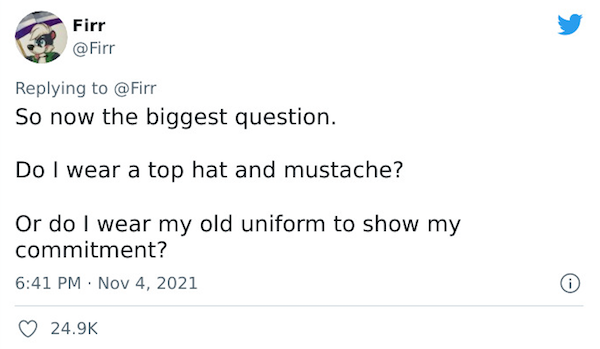 Ultimately he decided to wear his old uniform with one exception…a moustache.

Armed with a disguise kit from his local target, he was ready to step in and get this ball rolling.

@Firr did clarify to all the people in his comments wondering whether he was nuking his career for a bit of fun that he was happily freelancing and that this little event was just a bit of fun and not reckless self-destruction. 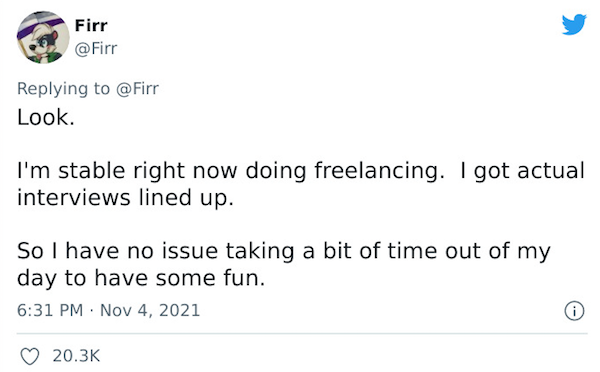 He was also excited to have received a confirmation call, confirming that they still had no idea who they were interviewing. 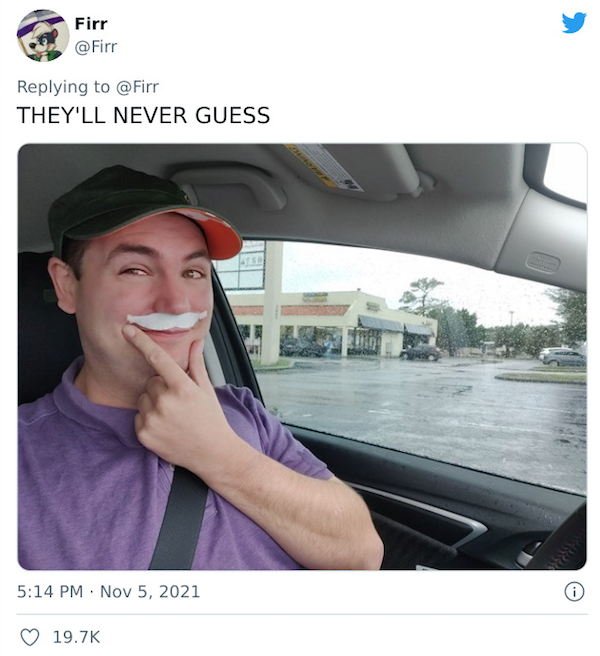 The front desk, surprisingly didn’t even do a single double take at his white stache.

He was also happy to discover the office wifi still welcomed him.

Not to be outdone by a face mask, he had also prepared for that eventuality 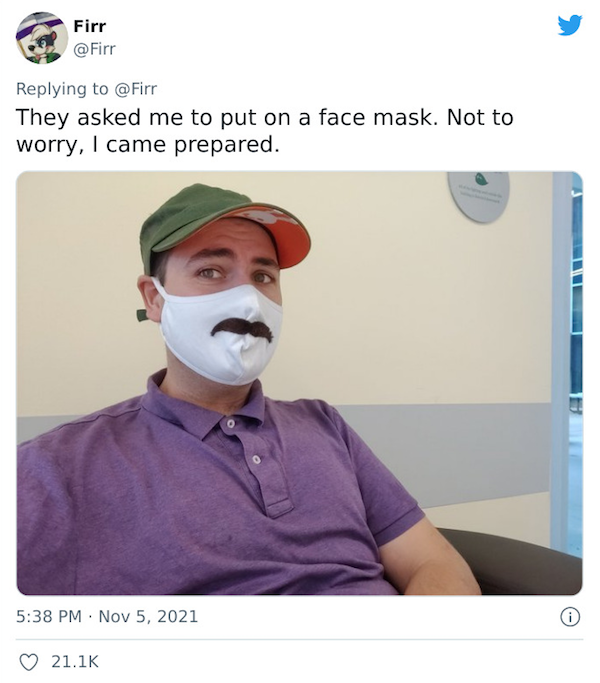 Unfortunately, the man hiring him was new and did not know his previous identity.

Luckily, the new guy was sweet enough to bring snacks

Bring in the cavalry, we say! 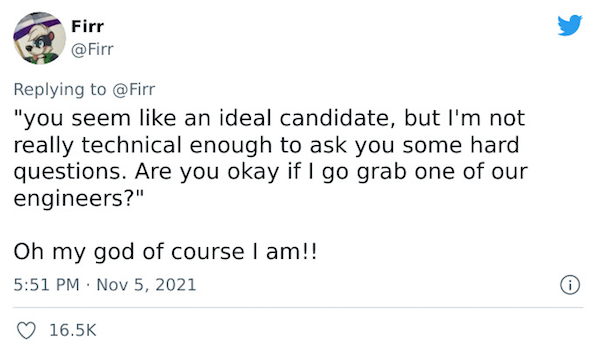 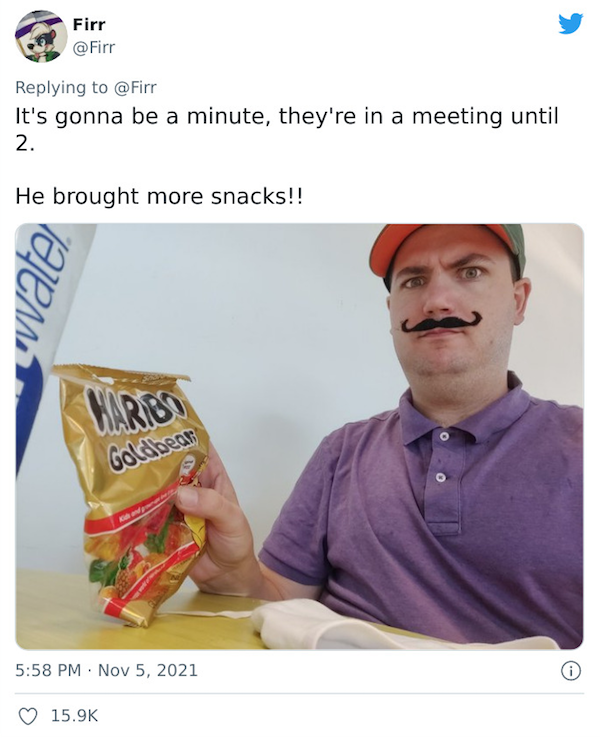 How has no one addressed the stache yet?

Could it be that the jig is up? 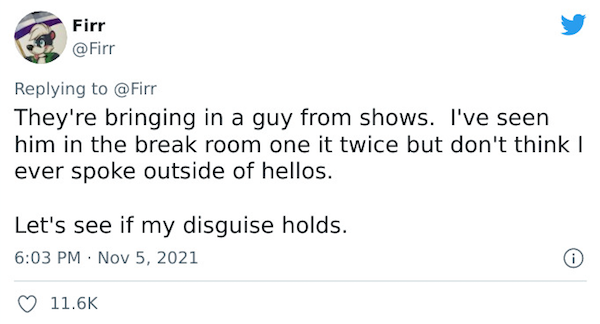 The secret to lying is telling the truth 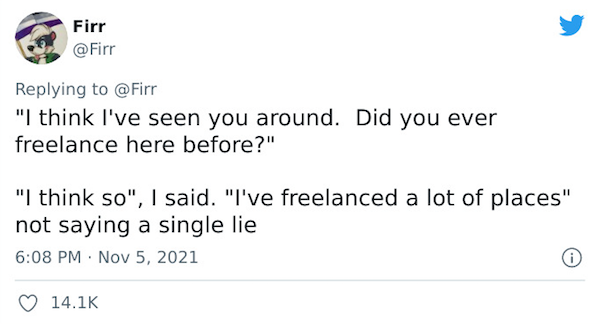 At this point, we're just here for the snacks 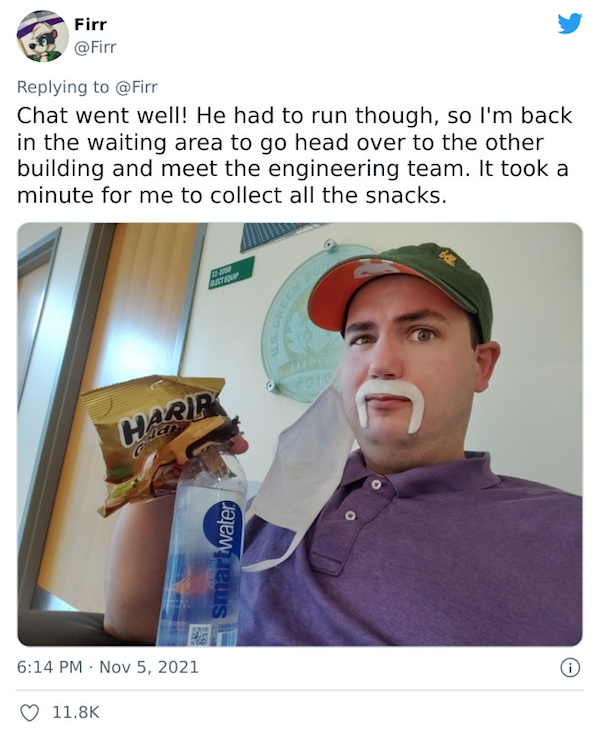 The moment of truth comes

and is delayed yet again 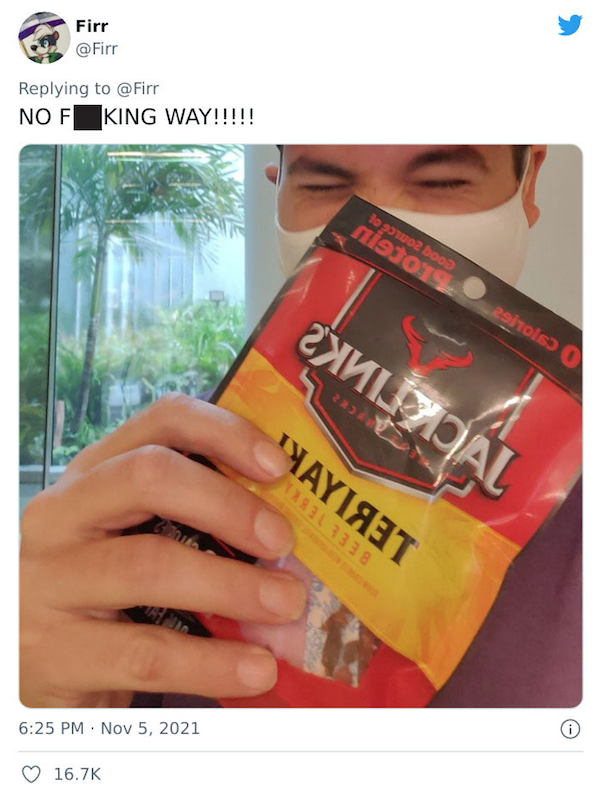 The boss has descended.

And he was angry.

Hiring manager feels betrayed. He gave us all those snacks. 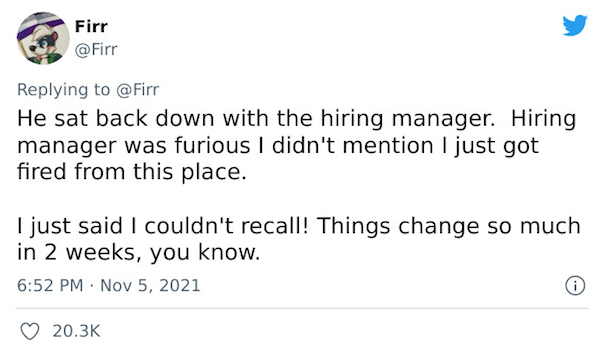 We'd wait to her back

Us. We who read this won. 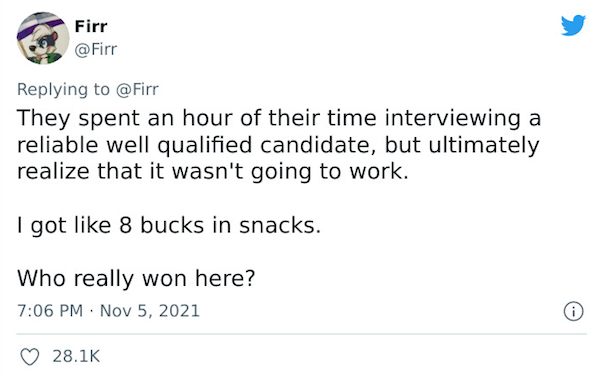 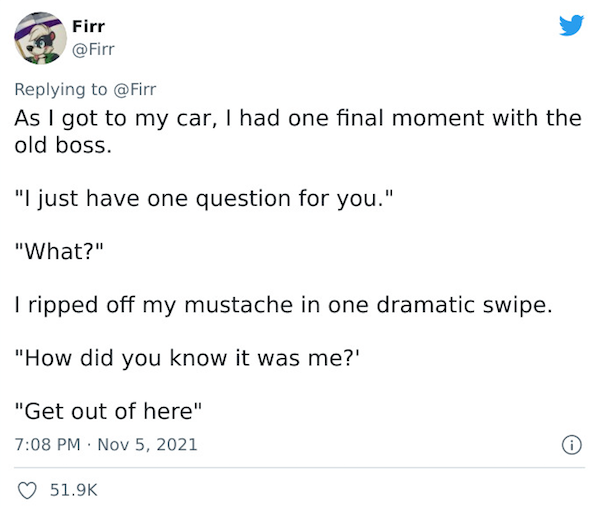