Posted by Sama in Cringey On 11th July 2021
ADVERTISEMENT

Internet rips apart this man who makes a video of himself having a meltdown and throwing a tantrum when gym staff revokes his membership for sexually harassing a woman. Watch the video and look at how the internet responds to his stupid comments made in the video. 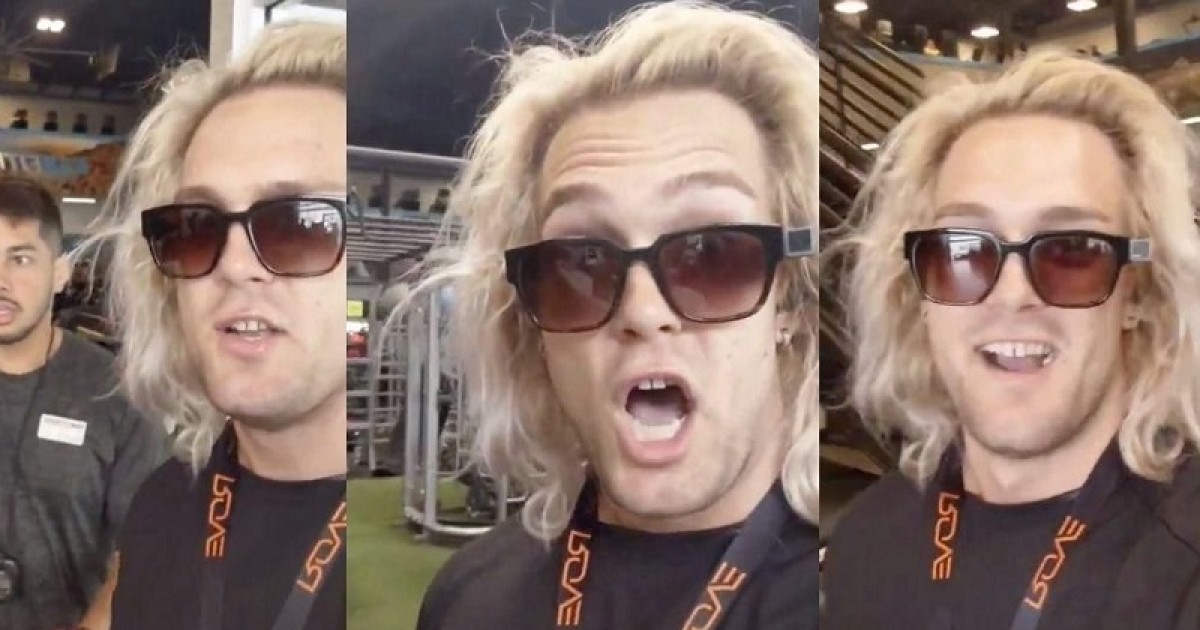 Video of a man throwing tantrum after being thrown out of the gym for sexually harassing a woman has gone viral. The man with long blond hair is seen acting haughty and throwing a fit and filing his own meltdown after gym staff informs him of his membership revoked. 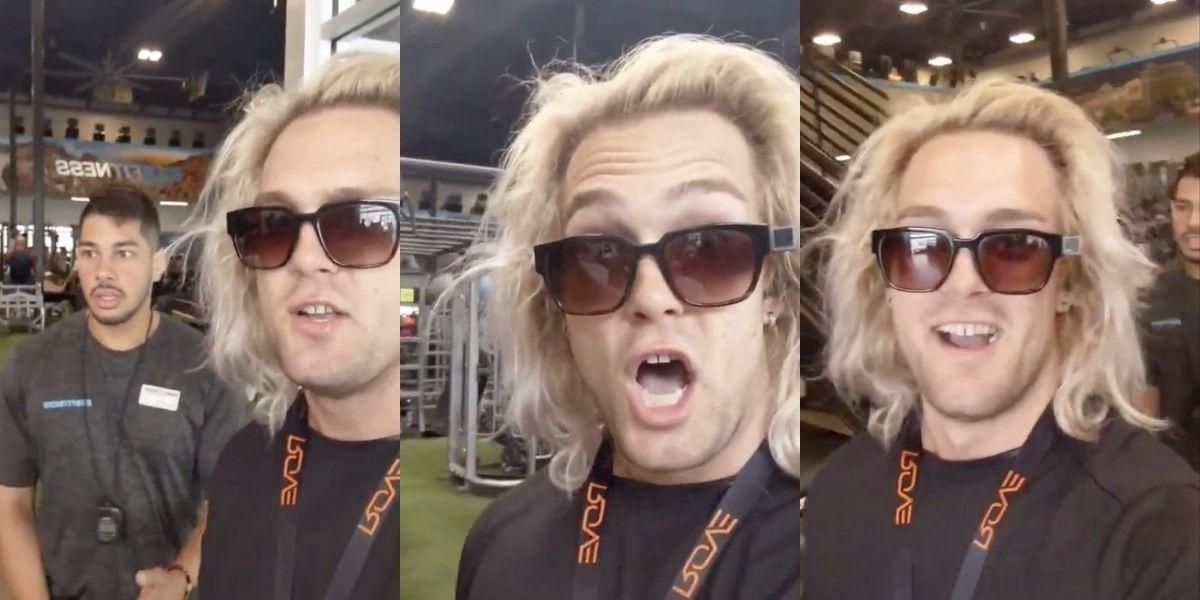 "What are you f'king harassing me for, bruh?" bellowed the frustrated gym rat to a staff member who had informed him his membership came up on the system as "revoked." 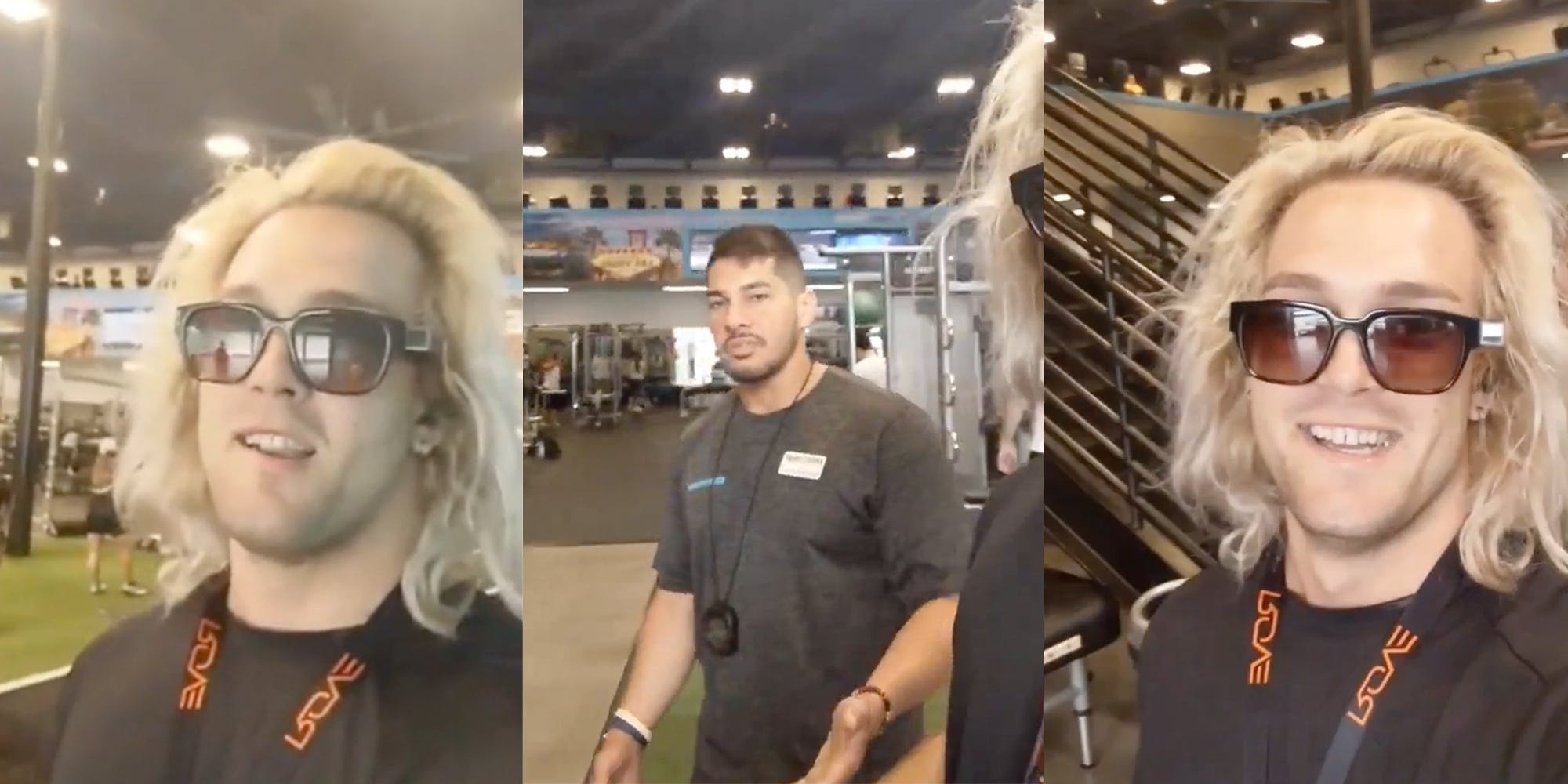 The man is constantly arguing with the staff for the reason behind his membership revoked and demands that the situation be fixed.

Talking to the camera, he said of the employee:

"This motherf'ker says my membership's revoked because I hit on a b*tch the other day, and the f'king manager wants to say 'oh, revoked' out of nowhere, dude."

While using offensive language, the man with sunglasses then continues his rant while being taken to the front desk, saying, "I don't have time to waste. fix it right now."

However, the gym staff stays adamant in their decision and makes it clear that the former member is now banned from entering the premises.

After the employee told him he would call the police if he didn't leave the gym floor, the man said:

The clip ended with the sexual harasser continuing to insist he had to work out.

Watch another video from another incident!

Redditors were not surprised about the allegation against him based on his disruptive behavior.

"'cause I hit on a bi*ch,' I could never imagine THIS MAN as a man that harasses or objectifies women." – 10wasoneofnone

"The narcissist never took the camera off himself even while getting booted out of a gym." – LuckyPlaze

"Literally using the camera to dissassociate failure. This guy is exactly the sort of person who needs to have his access to firearms removed before he goes on a shooting spree." – macrowe777

"He looks like the employees made a training video to teach what happens when you have to revoke a membership and to illustrate how ridiculous a person can be, and how to maintain professionalism while staying in control."

"I only say that because this guy is too good to be true." – Khufuu

Others commented on how well the employees managed to maintain their professionalism during the angry confrontation.

"Those are some top notch employees. They did well when faced with incredible douchebaggery." – mmanseuragain

"Patience goes a long way. He's a bully, he's looking to get a rise out of the people around him, escalate the situation. Best thing to do is be firm & patient. But as a middle school teacher, I'm sure you know better than I. Respect." – MisterPooty

This was not the first time the man filmed himself being kicked out of a gym and cursing at employees.

Another Redditor wrote what allegedly happened at a previous time.

"He was told to leave after telling a girl her body is amazing and asking if she wanted a massage after her workout." – fatphotog