It's pretty normal to think the workplace would have rules. You do a good job, help out and you will be rewarding, at least that's how things should be. But more often it's the other way around, there are petty office politics, favoritism and insecure bosses who don't want to see their employees rise above them. Sadly all this behavior goes without any consequences. But on rare occasions, those hard-working employees come out on top. 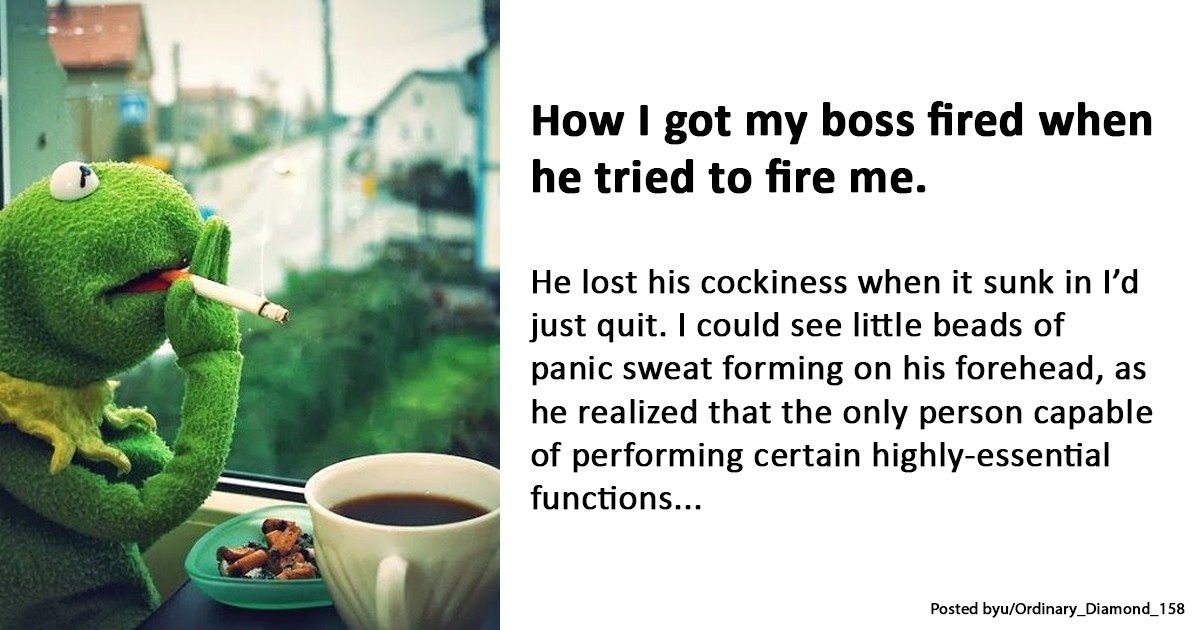 Starting out, let me explain why there wasn’t a mass walkout and I am the only one that quit despite us basically being terrorized and treated like slaves. The job market was in shambles in my city at that time with something like a 40% unemployment rate. I knew someone with a doctorate degree in theoretical physics working at a local fast food joint as it was literally the only place hiring (the city had quick access to 4 research universities but he got "downsized" due to lower admission rates. He is now the dean of the physics department at his former school). To quit any job, no matter how bad, was financial suicide and a guarantee that you would not find a new one.

I always worked customer service, food service, and hospitality since I was 14. At 24, I decided it was time to find a job with benefits and potential for career advancement, so I took a job stocking shelves overnight with a global monstrosity that started out as a mom and pop store. I felt right at home.

I worked hard and constantly took the worst jobs and the worst days off to make sure I would be there on the weakest staffing days to rub elbows with management. If there was anything that occasionally came up that no one on the shift was trained to do I would come in on my day off, without pay, to get trained how to do the task (like keys, paint, accounting issues, etc.) to become less disposable and more versatile. It worked, and ten months in I found myself with an offer to promote to low-level management starting January 1.

Starting the weekend before Thanksgiving, the overnight manager started to under-staff shifts — to preserve his end-of-year bonus — and acted surprised when people called out. He would then bully us into staying over with threats of write-ups for not finishing our “assigned stocking tasks.” Upper management was notorious for just signing off on write-ups without looking into their validity, so each staff being assigned 13+ hours of labor to complete alone in 6 hours (while typically it was approximately 4.5 hours to account for tending to customers as well) was no defense. Since an employee could only get two of those write-ups in a rolling 13-month period before termination, we all would stay over, as well as skip our breaks and lunches to finish, those write ups were also less job-threatening as he would simply turn a blind eye to us clocking out for break/lunch and returning to work.

But there was a catch: since any approved overtime would count against his $73,000 bonus — approximately $0.11 per approved hour — he would never file the approval forms for the OT. This meant that it was considered unapproved, meaning that we were required to get approval to cut hours off our regular shifts to equal out what we stayed over. He, of course, never approved us to cut those hours.

This was resulting in weekly write-ups, from the same manager, for unapproved overtime on those of us that made it to work every day despite the weather and missed holiday get-togethers with our families. Every week we would get our write-up and he would get praise for getting everything done with less approved staffing hours then typically allocated.

Thankfully, write-ups for unapproved OT didn’t carry a lot of weight, but for three months they counted against your points for promotion opportunities. This went on until the week before Christmas.

When I got my weekly write-up, I was told by the store manager — who offered me my promotion — I would be suspended for “overtime abuse” the next time my manager submitted a write-up for unapproved overtime hours. Determined to not lose my promotion, I started telling the manager no. The second time I refused to stay over without him signing an “overtime approval form” and giving me a physical signed copy, before I hit overtime, he wrote me up for “abusive actions towards a member of management” and “actions with intent to undermine the integrity of management and store policies.”

This instantly cost me my promotion, which greatly upset me, and then, like the idiot he is, he left me alone in his office to sign the write-ups and the acknowledgement that I was no longer promoting.

Initially, I was going to just accept it and resolve myself to spending the next 13 months working my tail off for minimum wage and go up for promotion as soon as they fell off. When I started reading the acknowledgement form, I found I was not eligible to promote to management until I was “write-up free” for five years. This meant six years and one month before I could even try to get promoted again. All because I followed policy.

So, rather than sign it, I wrote, “F*** OFF,” in sharpie across his brand-new desk — which he got for being such a "great" manager — walked out of his office, handed him my vest and name tag, shredded the write-ups and tossed them into the air like confetti, and told his no-longer-smug face that it was now my personal mission to get him fired.

He lost his cockiness when it sunk in I’d just quit. I could see little beads of panic sweat forming on his forehead, as he realized that the only person capable of performing certain highly-essential functions for his shift was walking out the door. He shouted after me, telling me that he could talk to the general manager and see if he could get the time frame cut down to three years. He offered to approve all of my overtime the rest of the season, offered me a cut of his bonus, and several other offers I can’t remember. Honestly, if he’d offered to withdraw the write-ups — which was still 100% an option but he never offered — I wouldn’t have accepted it, but I might not have followed through on my threat. I was too angry and too determined, and I didn’t care if I became homeless as long as I never had to work there again.

Now, how did I get him fired? Well, due to certain ADA requirements, I was permitted to carry a voice recorder with me at work so I could record important meetings, announcements, and reminders. When I got written up the first time for unapproved overtime, I started recording his “requests” to both me and coworkers. I never used them to dispute the write-ups, but I never deleted them, either. So, I uploaded all the recordings to my computer — nearly 18 hours of audio — and sent it to the home office, CCing every store manager and compliance officer in the district.

When I went in for my last paycheck, he was long gone. I was offered my promotion back, but I declined. The regional director then offered me my old managers job, with a $73,000 hiring bonus (wonder where that came from LOL) but I still refused and said I was never returning to retail. My former manager's boss laughed and told me that everyone returns eventually, and when I did come see her and she would find me a management spot somewhere.

After five months of being unemployed, living with my mom, and barely surviving, I moved to another state and got a job working in a state prison as a guard and am very fulfilled.