Posted by Sama in News On 13th February 2018
ADVERTISEMENT

Judy Holland was bewildered when her 7-year-old daughter came home from School with burnt hair. Upon inquiring the matter she got to know a second grader in School allegedly put her daughter's hair on fire before blowing out. Judy is furious at School for such incident and is demanding answers as to how a lighter ended up in School's premises and that too in the hands of a second grade child.

#1 Outraged At The School For Irresponsible Behavior

According to Mikaela's younger sister, the little boy allegeldy took out a lighter and burned her sister's hair from the bottom before blowing it off. Judy says that she understands that the young boy is just a kid but what she does not understand is that after the alleged incident why didnt the School allowed her daughters to call her. According to a source, Mikaela asked a School worker to allow her to call her mom after her hair got burnt but she was told to keep quiet and eat her lunch.

Detroit Public Schools Community District have refused to give any official statement and claim that they are still investigating the matter. While Judy states that she have no reason not to believe her daughter and demands School to give her answers why the little boy had a lighter at School. "I want to know why a child had a lighter."

Angry mom says the alleged kid who brought lighter to School is only a second grader, "It was a little boy, he’s in the second grade. It was a red lighter and three of the students [saw] him. And the boy, when her hair caught on fire, he was blowing her hair out." What scares Judy most is that, had her daughter gone to School with any hair product, her hair could have catch fire and the incident could result in serious injury. "My baby could have third-degree burns right now. I don't want this to happen to any other kid."

After the story reached social media, people are criticising School District for showing irresponsible behavior which could have resulted in a serious injury and even after the alleged incident, the School is not taking the matter seriously, one stranger commented, "The kid probably took the lighter without their parent’s knowledge. That being said, this how a well functioning police state is being ushered in. Adults to lazy and apathetic to do their damned jobs now make way for a school districts to install more CCTV and police personnel at school. Also it reduces a child’s right to any sort of privacy. Wouldn’t be surprised if next school year, the kids at that school would have start carrying clear backpacks. But this second grader sounds like he’s on his way to becoming prime killer material." 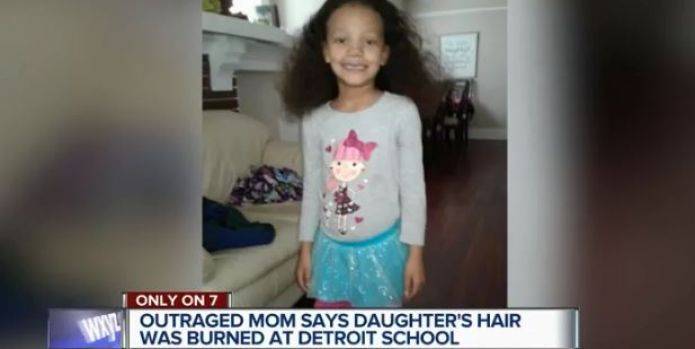 Another person pointed out to Judy that Schools like these are based on corruption and they are going to ignore her pleas for investigation until she gets tired of trying to seek justice, "Smh schools act like they’re their own separate government. They hide corruption & keep it to themselves. When they say investigate...they mean procrastinate until the parents give up seeking justice for their child. And innocent kids suffer. This is what I used to dread about school...the people. It wasn’t all the homework, pop quizzes & hard tests that tied my stomach in knots...it was having to deal with mean/stupid classmates & teachers. You just felt trapped until summer break or graduation."