NASA conducted an eight-minute burn of its Space Launch rocket, which will return humans to the moon. Two boosters and a large core stage were tested as part of the Space Launch System rocket. When the engine's launch, they will produce 8.8 million pounds of thrust, and 1.6 million pounds during this test. In the future, the $18.6 billion rocket will be capable of transporting astronauts and cargo to the moon in a single journey. 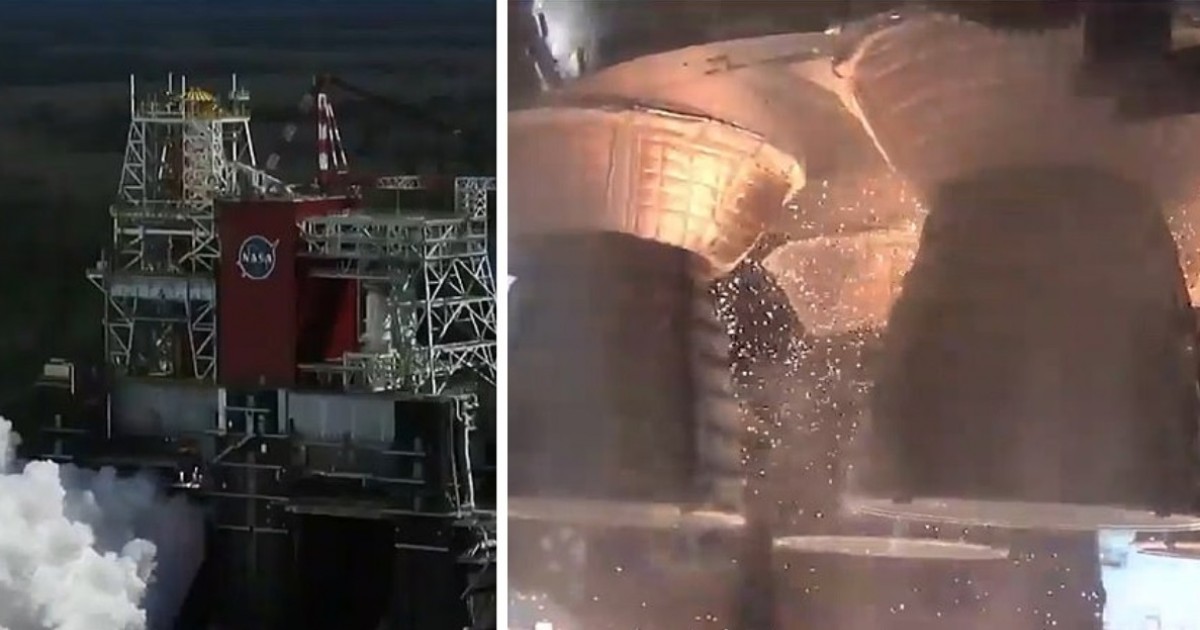 Following a successful test of NASA's Space Launch System, the first woman and next man to launch to the moon are one step closer to walking on the lunar surface (SLS).

The $18.6 billion "mega-rocket" completed an eight-minute fire test of its enormous engines on Thursday, the final step required to proceed with the November launch of the Artemis I spacecraft, which will send an unmanned capsule to Earth's natural satellite.

The rocket's core stage was subjected to a "green run hot fire" test, which saw four RS-25 engines produce 1.6 million pounds of thrust while draining thousands of gallons of liquid hydrogen from the tanks.

At 4:37 p.m. ET, the giant engines at the Stennis Space Center in Mississippi roared to life.

As a giant cloud of pure white smoke from the hydrogen burn blew out of the core stage, the group shook violently.

The Artemis I core stage hot fire test is described as a "launch where the rocket never leaves the ground," but it is intended to put the propulsion stage through its paces while gathering data. 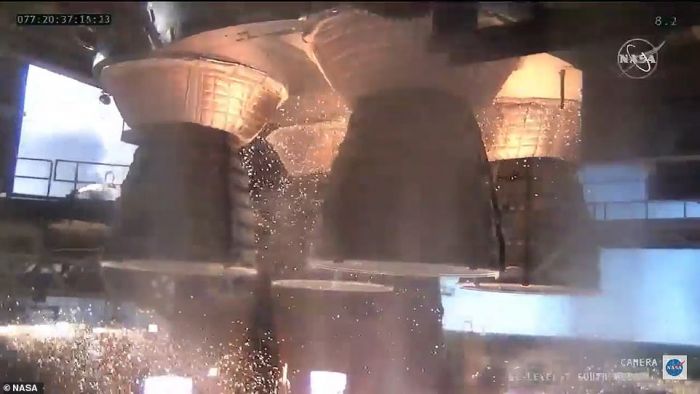 The Orion capsule will be sent around the moon without a crew in November for the first launch of SLS, Artemis I, followed by a crewed mission in 2023 for Artemis II, and finally the next lunar landing with Artemis III in 2024.

Flight computers, 50 avionics units, navigation and control systems, and flight software that manages the first eight minutes of flight were also put to the test by NASA.

Jim Bridenstine, the former NASA administrator, said during the live stream before the milestone test: 'We are going to the moon this time we are doing it unlike we’ve ever done before.'

'We’re going to learn how to live and work on another world for long periods, using the resources of the other world. 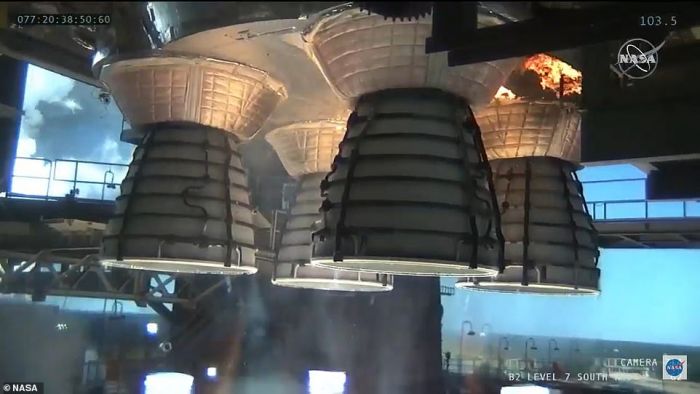 'We’re going to use the resources of the moon to live and work with a purpose because ultimately we want to go to Mars.'

Engineers also gathered a wealth of information about how the stage performed during the test, including throttling and dynamically moving the engines in a variety of patterns.

In January, NASA tested all four engines of its massive core stage, but the test only lasted about a minute, much less than the four minutes engineers required. 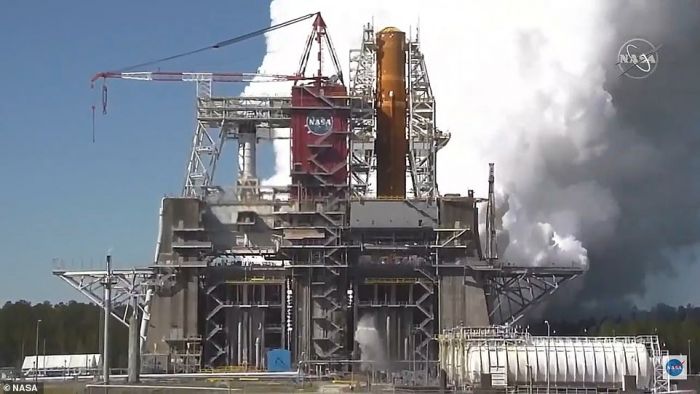 The Artemis I core stage, on the other hand, was demonstrated to be ready for launch on Thursday and will be delivered to NASA's Kennedy Space Center.

It will be installed alongside the ten segments that make up the two booster rockets that were delivered earlier this month.

It will be assembled and integrated with the rest of the rocket and the Orion spacecraft once it arrives at Kennedy.

Orion will finally convey the first woman and the next man to the moon's surface, which is set to happen in 2024. 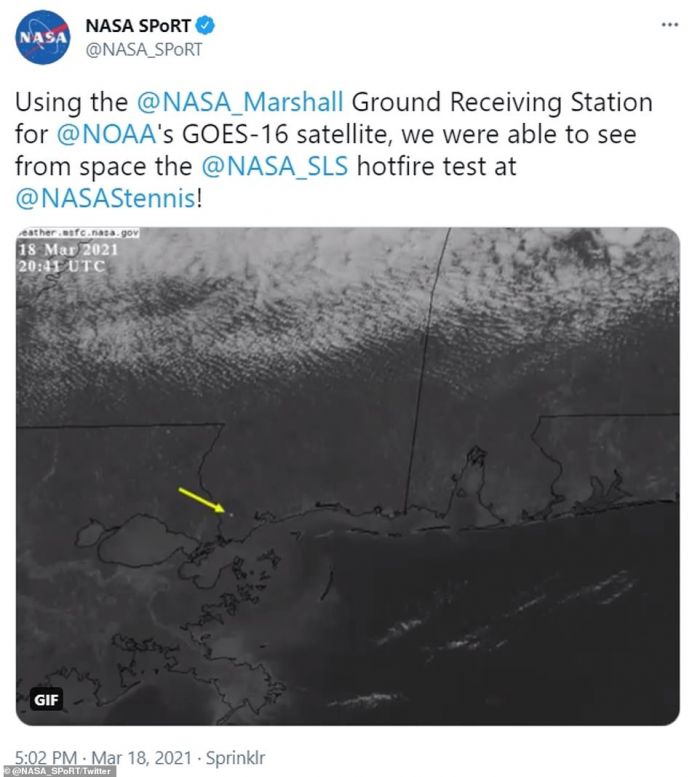 'The test, which included a full-duration, eight-minute engine burn, demonstrated successful core stage operation and will be used to help certify the stage for flight.'

Exploration Ground Systems teams at Kennedy Space Center have completed booster assembly and have stacked all components of the solid rocket boosters for Artemis I in the Vehicle Assembly Building. 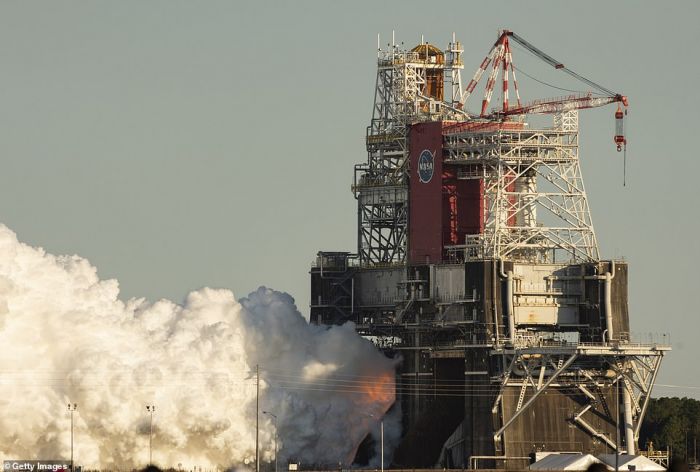 Other components of the rocket and the Orion spacecraft are being prepared for final assembly and integration at Kennedy.

NASA's SLS rocket is the most powerful in the world, designed to send astronauts and supplies to the moon and beyond aboard the Orion.

This is the final stage of the Green Run, which is a series of exhaustive testing of the SLS core stage and its engines.

Because it's a "complex new rocket stage" with four RS-25 engines and massive tanks holding more than 700,000 gallons of super-cold propellant, extensive testing is required.

The SLS has four powerful engines at its base and two solid rocket boosters on either side, allowing it to carry bigger payloads to the moon than the Apollo astronauts' Saturn V rockets.

The SLS core stage and twin solid rocket boosters fire at liftoff to propel the 5.75 million pound rocket off the launch pad at Kennedy Space Center in Florida and into orbit with an uncrewed Orion spacecraft.

When it is ready for liftoff later this year, this launcher will support it through testing and transfer it to the launch pad at the Kennedy Space Center.

'It means the rocket is being assembled on the mobile launcher and we are in the final stages of a long journey - getting to launch Artemis 1.' 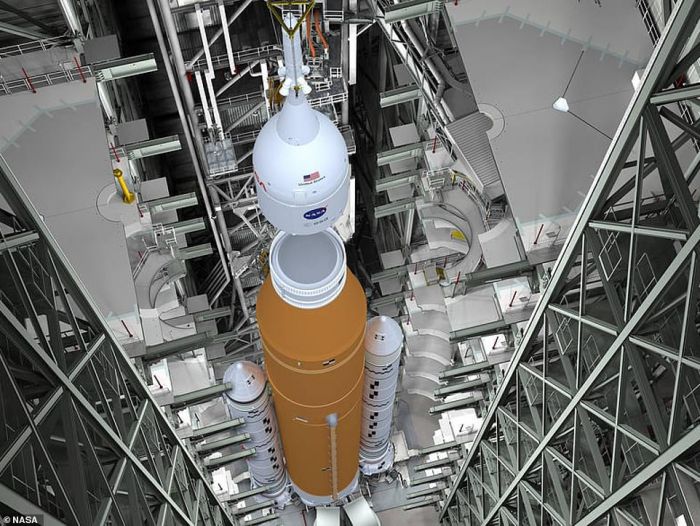