Posted by Sama in News On 5th August 2020
ADVERTISEMENT

The obituary of a Texas man holds a dooming message for all, “May Karma find you all.”

David W. Nagy’s obit has gone viral on different social media platforms ever since it was published in the Jefferson Jimplecute newspaper on July 30 — in part for its fiery tone. 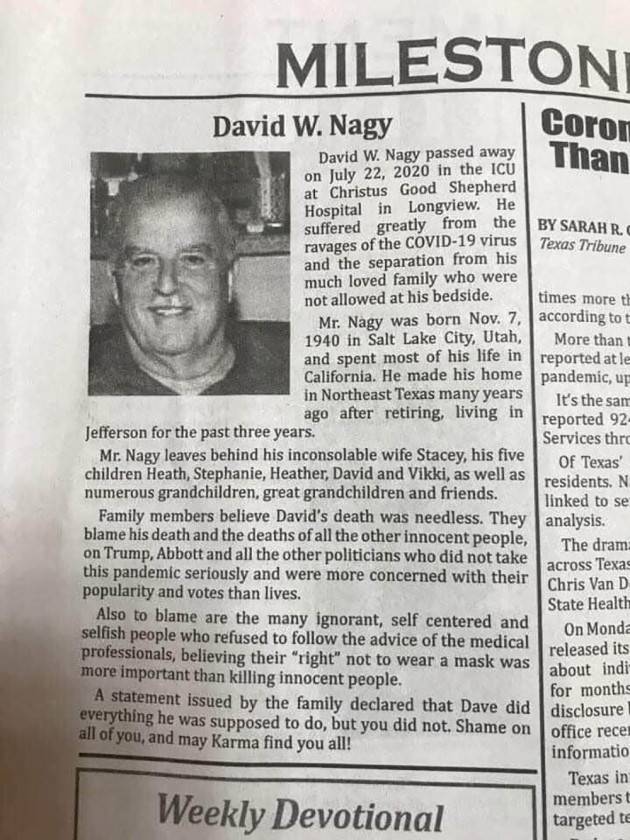 “Dave did everything he was supposed to do, but you did not,” the obit reads. “Shame on you and may Karma find you all!”

The obituary lays the blame of Mr. Nagy's death on the ignorant self-centered people as well as various politicians, including President Trump and Texas Gov. Greg Abbott.

“Family members believe David’s death was needless,” it reads. “They blame his death and the deaths of all other innocent people, on Trump, Abbott and all of the other politicians who did not take this pandemic seriously and were more concerned with their popularity and votes than lives.”

Also to blame, the obit adds, are “the many ignorant, self-centered and selfish people who refused to follow the advice of the medical professionals, believing their ‘right’ not to wear a mask was more important than killing innocent people.” 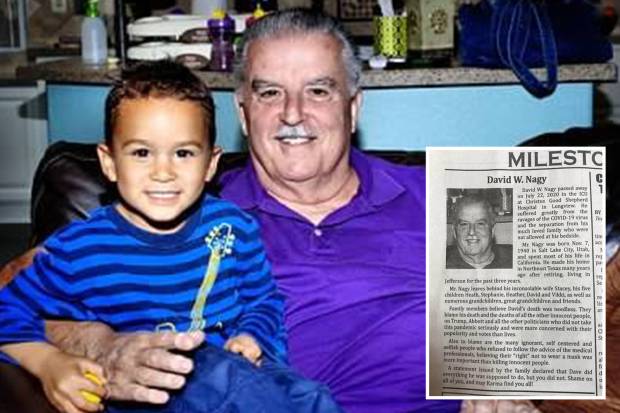 The obituary was made public and printed in the newspaper by Nagy’s devasted wife Stacey, who said she wrote it because “I don’t want his death just to disappear.”

She told the fact-checking website Snopes that she was glad a photo of the obit had gone viral, garnering more than 9,000 likes and 3,000 shares on Twitter.

“It gets me so angry that people are aren’t taking this seriously,” she told the website, referring to the virus that has killed at least 155,000 Americans.

“The people who are dying are the older people especially — a lot of younger people are dying too — but it’s almost like they’re saying, ‘Who cares about the older people?’ I’ve been with my husband for 20 years and all of a sudden he’s gone. People should know how this makes others feel.” 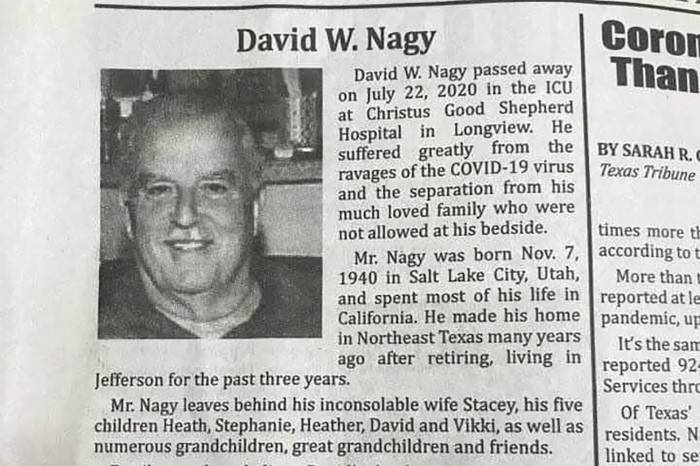 Stacey Nagy also said she doesn’t see the pandemic as a political issue.