People Who Got EXACTLY What They Deserved

Posted by Editorial Staff in Funny On 20th January 2017
ADVERTISEMENT

Being in a loving relationship is the cat's pajamas. Finding true love, or even your soul mate is something we only dream about. But relationships are difficult and a lot of work. Sometimes, however, people decide to call it quits and instead of making a clean, honest break they, well, lie and cheat. While that’s an issue in itself, the real drama often occurs when they get caught, especially if their partner decides to get “creative” with their revenge. Revenge, although often bitter, tastes a little bit sweeter. 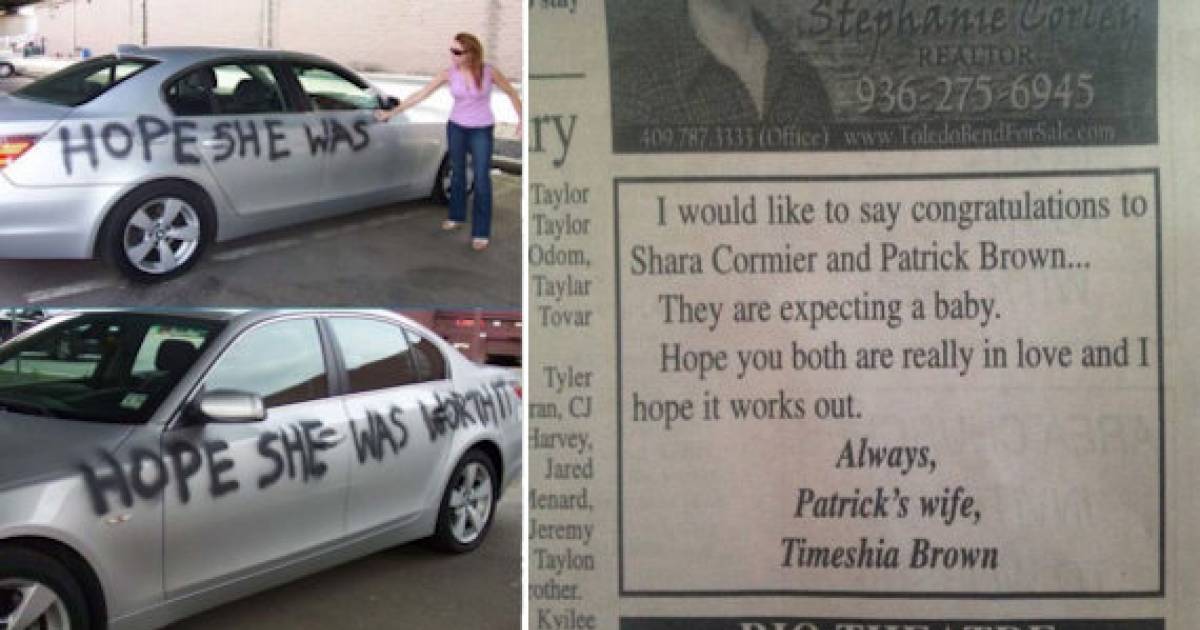 #1 But Will She Forgive Him? 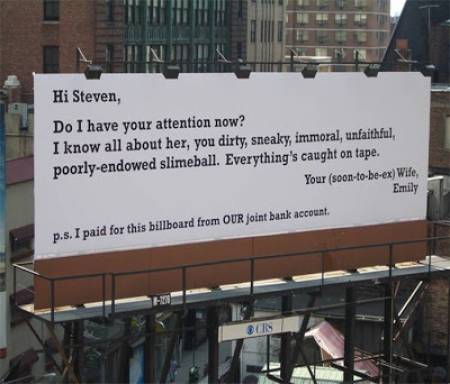 This is not a strawberry shake that exploded. It's red paint and it's spelled K-A-R-M-A. He always said she was a lot to handle and she proved it. 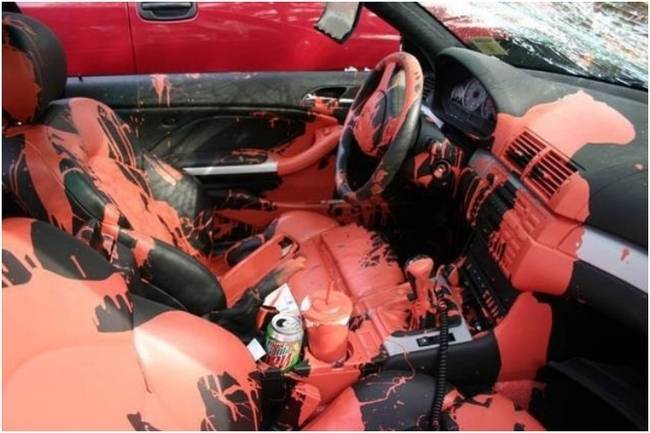 #3 Which One Is Sneakier?

She made him get her name inked on his arm and left his ass. Now she's got balls. 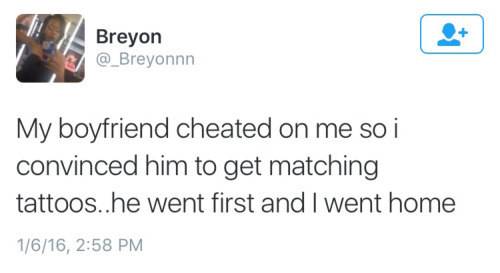 Apparently, this husband has been upgraded from an amateur liar to an expert. WTG!

But FYI, spray paint is always fun to play around with. 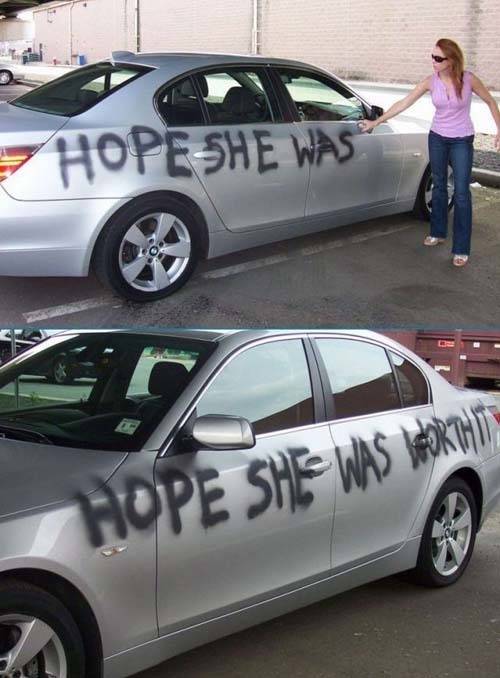 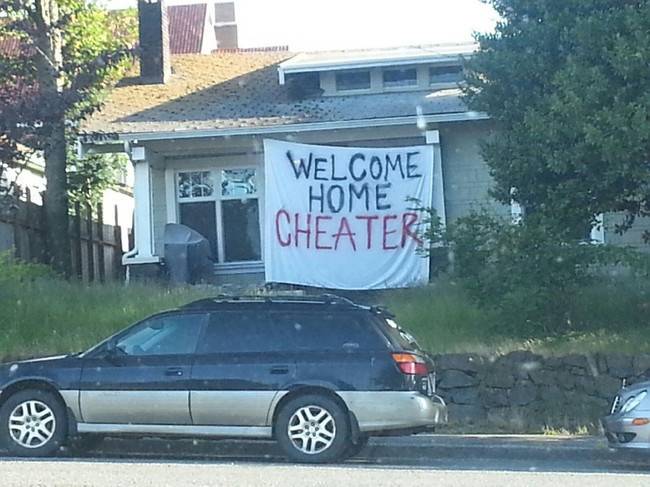 She could have done worse things to 'sweetums' but she just took his nuts. Let's hope nobody comes to pick them up before he finds them and takes the Blazer out for a spin. 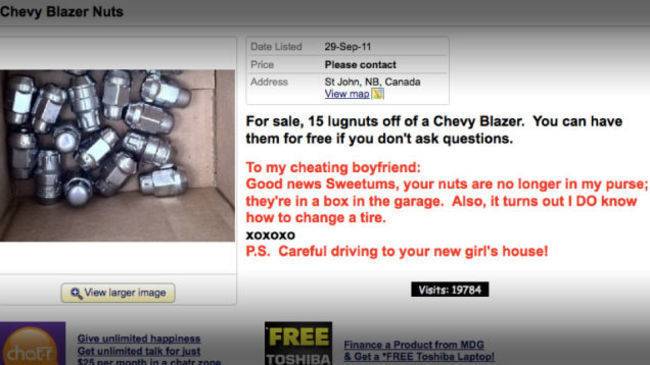 Sorry beloved neighbors, but all that banging and shouting is exactly what you thought it was. We fought because he's a dick. Now I've got to go, but please remember me. PS; Don't invite dumbass to the block party with his new girlfriend! 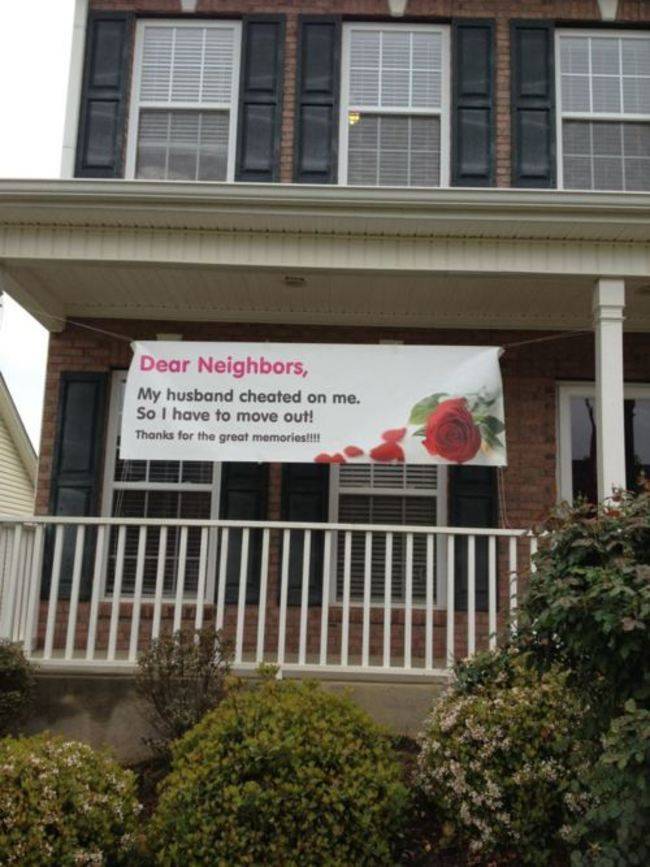 Oh look..everything is FREE. Even that rainbow colored SUV. Let's stop and take a loot around. 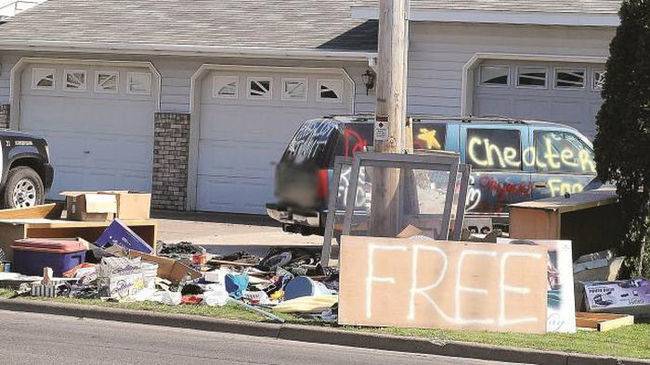 They're just roommates, but I bet this guy will be careful when placing an ad for a new one. "Must Not Like Kraft Dinner!" 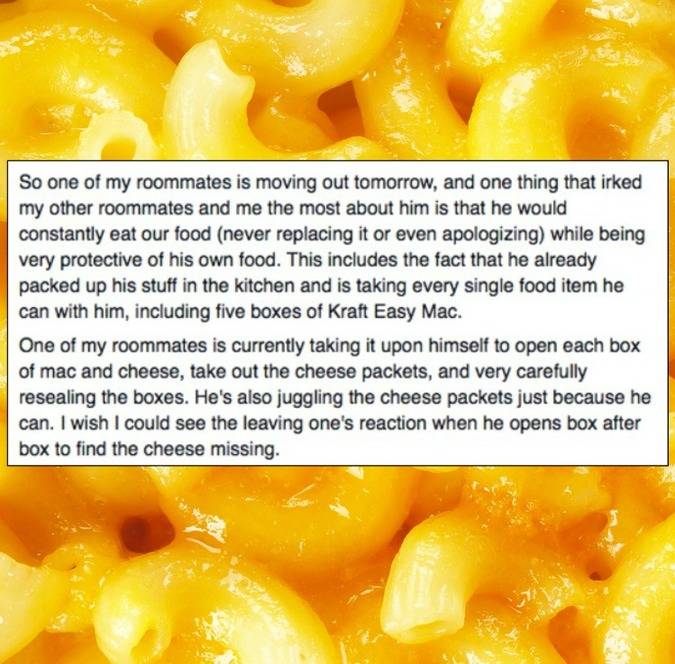 Dave got caught. Dave is broke. Dave has a girlfriend anyway, and a Ford Excursion. I hope it's paid for already. But hey, she did sign it with a heart! 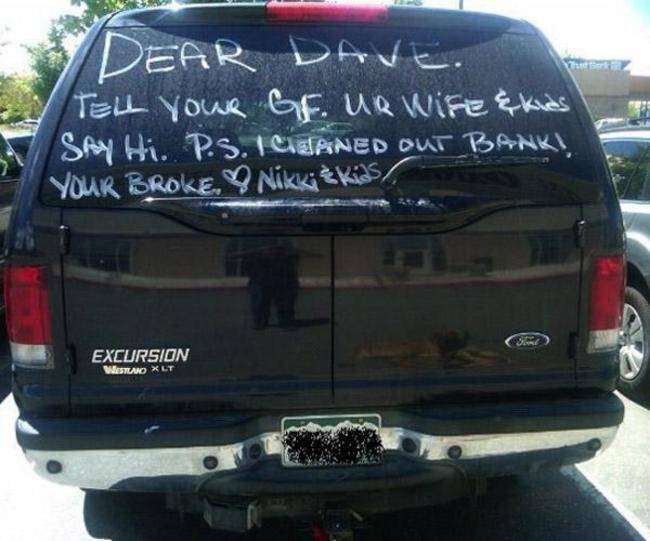 Everything must go. Including the “moron” who wears golden chains, is a bit of a spaz yet still overweight and still collects vinyl records. If I didn't know better I'd think this was me. Nope, I don't have poly blend suits anymore. 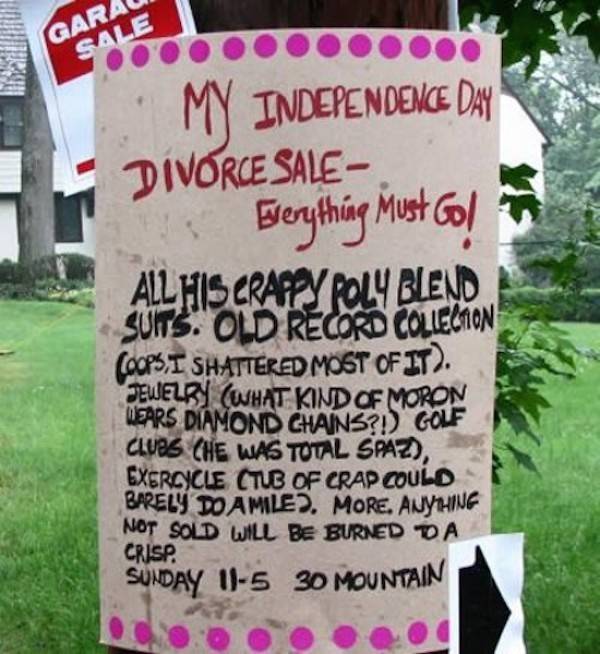 Folks, look around. These are the type of people living right in your neighborhood. And in case you are not clear, that arrow is his cheating bride. 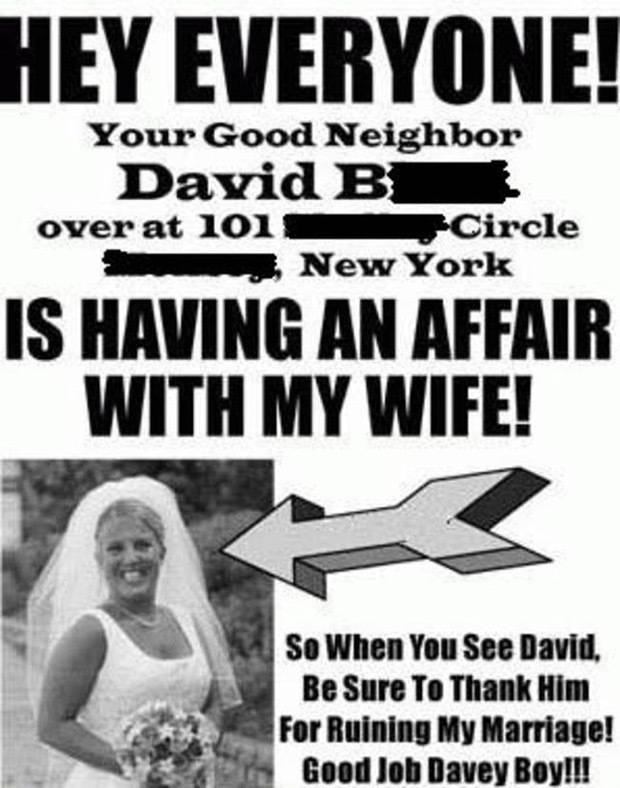 Poor Mawmaw. Linnie was cheating on all four women in his life. Now I have no idea what kind of people Luann and Vivian are, but they can’t be too happy about this news either. 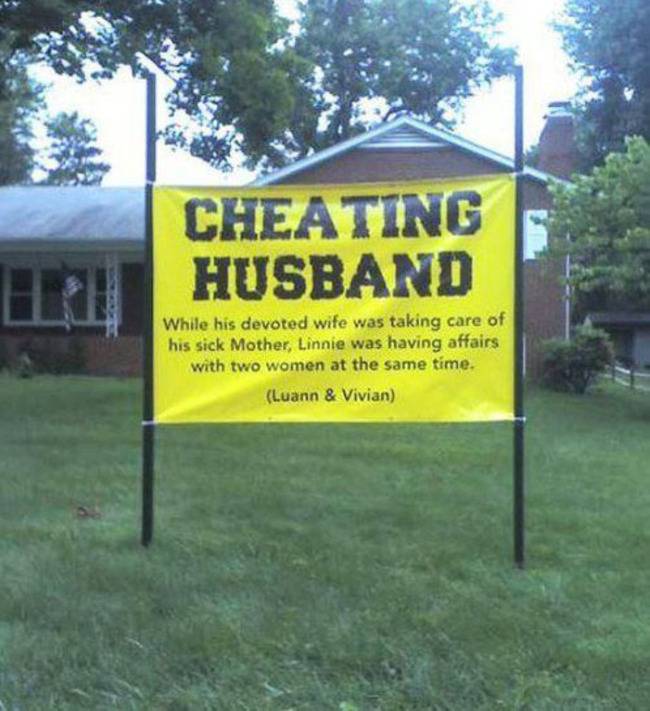 #15 Now This Is Making Me Bleu

There are no amount of little hanging trees that are going to clear out this smell. This is the act of an evil genius who has time to wait it out. 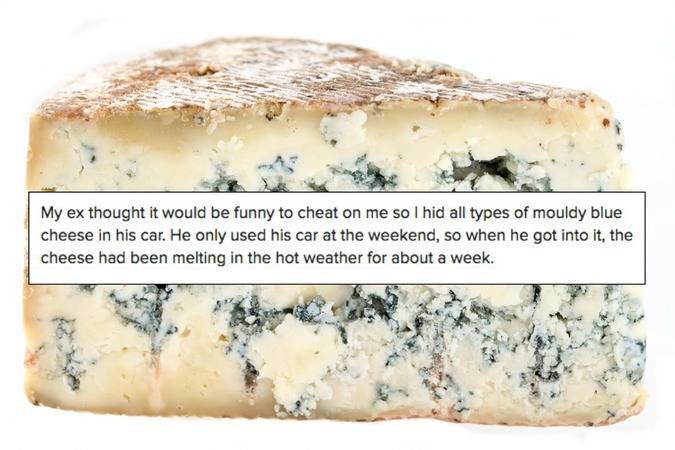 Timeshia is so thoughtful. Always there to say just the right things to those around her who may need comfort. The newspaper ad was a sweet touch. 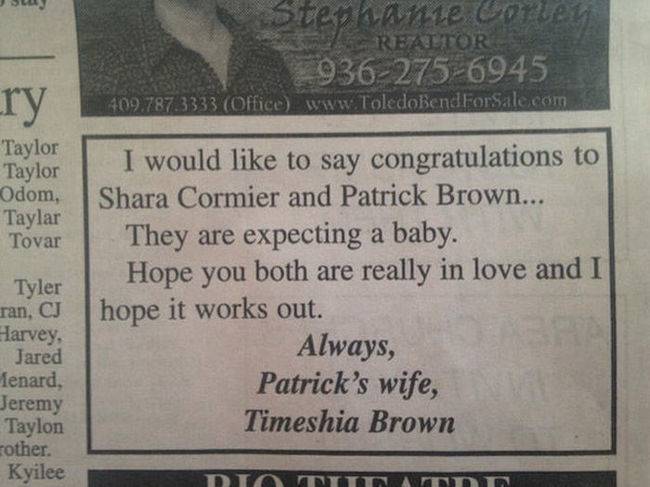 #17 Roommates, We Told You They're Messed Up!

To be fair, they are both gross and despicable. Never find a roommate on Craigslist. You get a lot of weirdos. Lesson learned?

To summarize: She caught him cheating, boxed up his stuff, and created a fun little scavenger hunt with clues for him to get it all back. 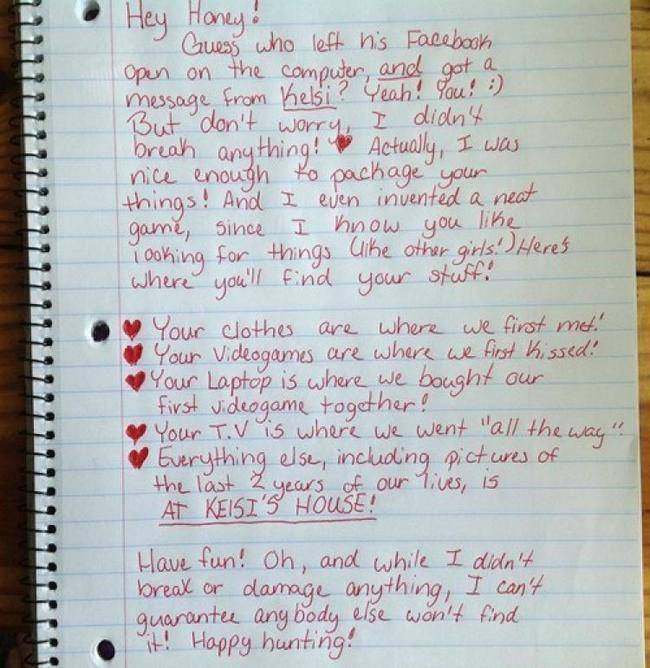 #19 He Just Found Out His Wife Was The Daughter Of Paul Bunyan.

Apparently, someone had quite the ax to grind. Be afraid. Be very, very afraid. 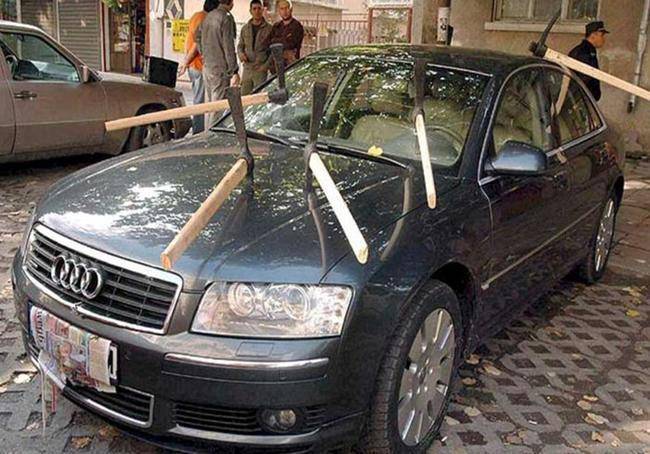 Jennifer did more to gather evidence than both the CIA and FBI do on a daily basis. 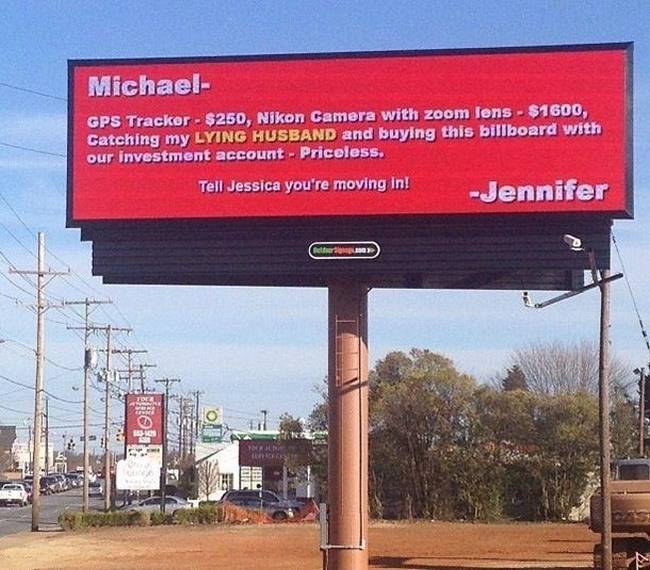