Posted by Michael Avery in Bizarre On 12th August 2016
ADVERTISEMENT

Kim Kardashian‘s butt has been the topic of conversation since 2007, when it started showing up on E! network. Its large size has mesmerized the masses and left us with a number of unanswered questions – Is it real? Is it fake? How big is it exactly? Taking a look at pictures of Kim’s infamous behind, it would appear as Kim Kardashian’s fame has grown, so has her butt. Over the years, the Kardashians have sworn up and down that Kim’s larger than life asset is all real and is the product of her Armenian heritage and working out in the gym. Despite their claims though, the following pictures prove otherwise. Real or not, we just want Kim to be upfront about her plastic surgery. Here are fourteen shocking photos that prove Kim Kardashian’s butt is in fact fake. 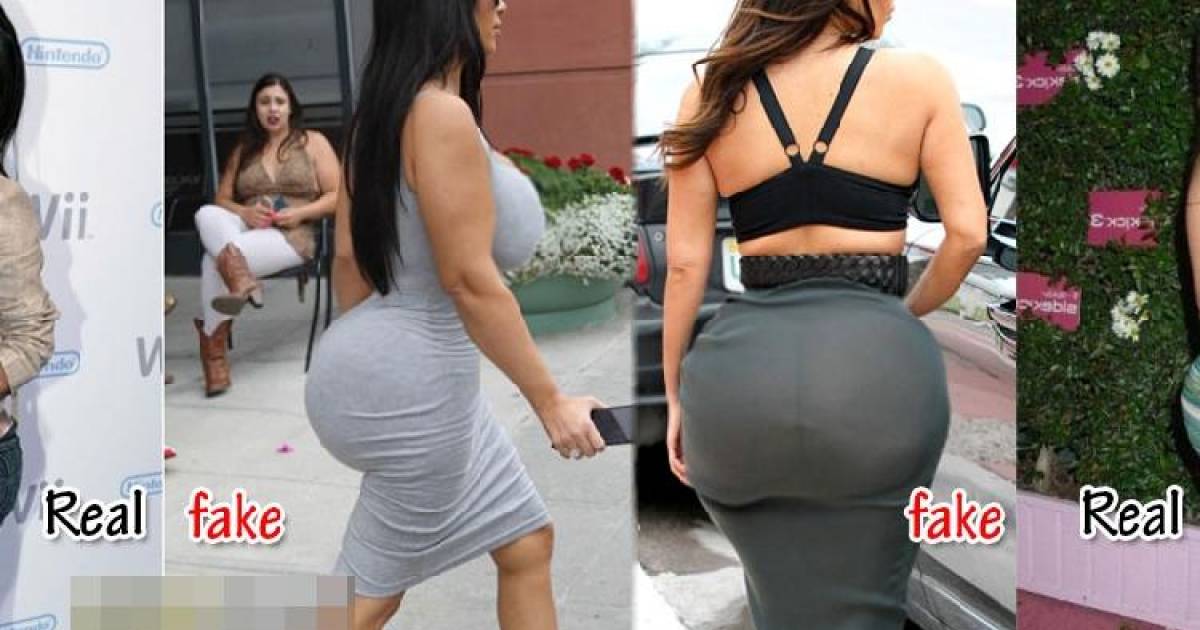 14. A Little Before and After

Before getting started on the Kardashian butt journey, let's take a look at a before and after picture. The photo on the left was taken when Kim first landed on the scene in 2007, while the photo on the right was taken in 2014. Notice the drastic difference in size and shape. As mentioned earlier, Kim credits her butt to her Armenian heritage and hard work in the gym. The photo on the left shows a more natural looking butt that could definitely be natural and/or a result of squats. However, the size of her butt in the photo on the right is too disproportionate to her leg size and if in fact she built that butt in the gym, her legs would be built too which they're not. 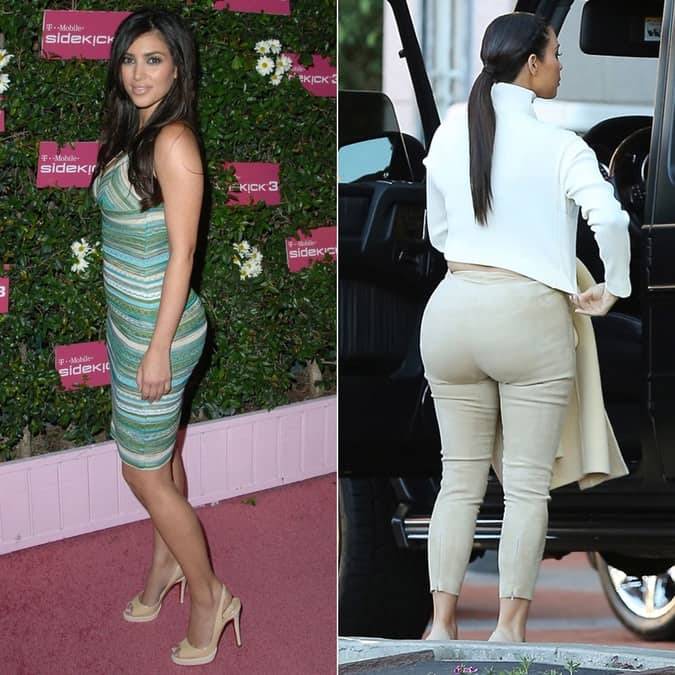 The below photo was taken in November 2006 a time when no one knew what a Kardashian even was. Although, she had a reality show in the works, Keeping Up With The Kardashians had not yet premiered on the E! network and Kim was known only as Paris Hiltonâs sidekick/assistant. Her butt in this pair of dark washed jeans is normal sized and proportionate to her build. 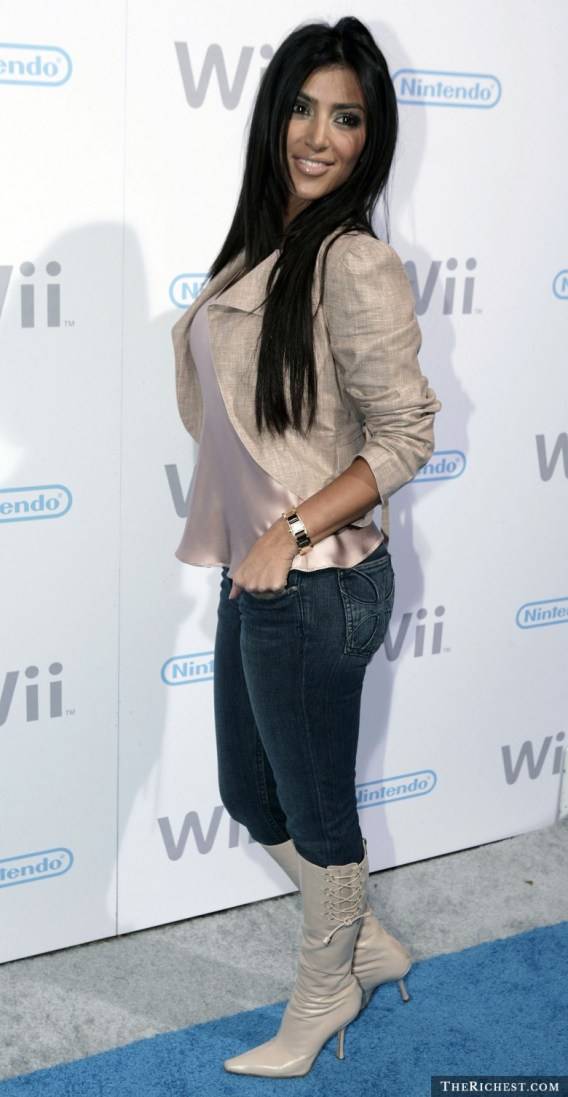 Kim Kardashian rocked this light blue bodycon dress in June 2007. Over the years, the bodycon dress has been a staple in her closet and has served as a way to show off her growing curves. At this point in time, Kim's stardom was rising but she was considered a socialite, and not a reality star yet. Again, her booty is proportionate to her body. It looks great, but at this point in time it wasn't the talk of the town. Jennifer Lopez was still queen of the celebrity booty club, but Kim was now a member of it. 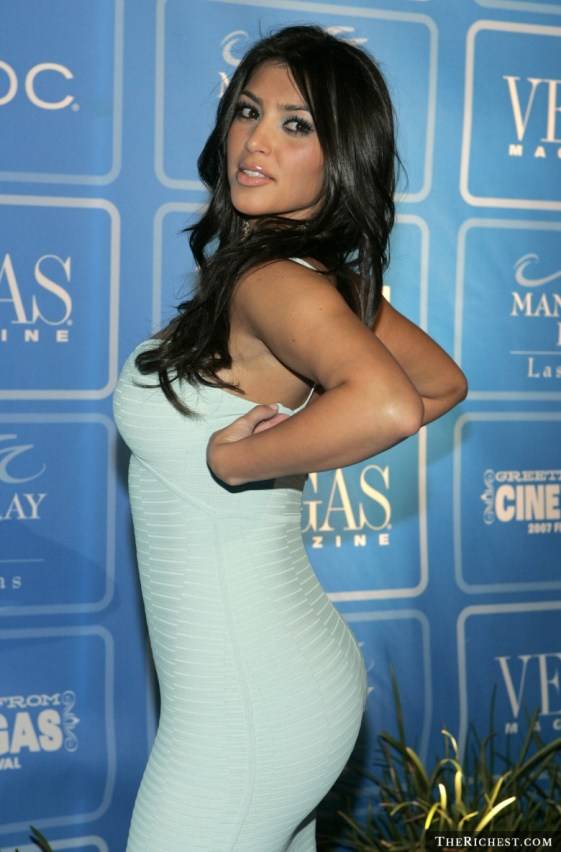 Kim continued to make it a point to emphasize her butt as shown in the photo below, which was taken in February 2008. This time she opted to wear a bodycon dress in white, which everyone knows makes things look larger. The way she stood when being photographed with her butt facing the cameras became her signature pose. The spotlight was literally on her butt and although, it was still proportionate to her body people were taking notice of it. Kim's butt became booty goals. 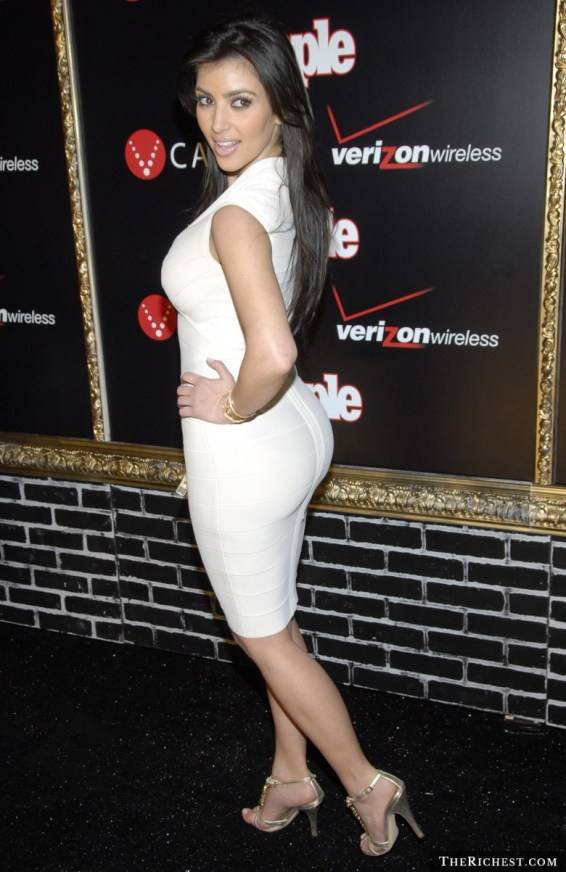