Posted by Aleena in Bizarre On 24th June 2022
advertisement

Unbelievable footage has surfaced of an orangutan smoking a cigarette in front of zoogoers. Online activists have expressed concern over the video showing a male orangutan at the Saigon Zoo and Botanical Gardens in Ho Chi Minh City casually smoking a cigarette while resting on the ground.

Shocking footage has surfaced of an orangutan smoking a cigarette in front of zoogoers.

The video was taken at the attraction in Ho Chi Minh City, previously Saigon, in Vietnam, and it depicts a male ape holding a lighted cigarette in the manner of a smoker. 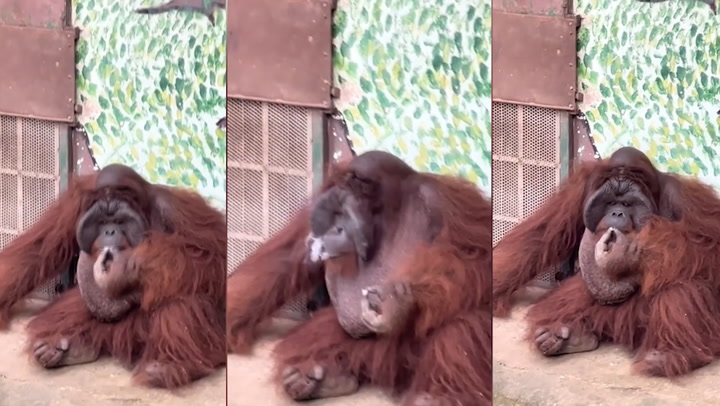 The people behind the camera start giggling as he then takes two lengthy draws before stumbling it out on some stones.

The orangutan appears to be an expert at the habit since he even examines the butt to make sure it is fully out before discarding it.

However, a representative for the Saigon Zoo and Botanical Gardens asserts that the orangutan did not get the cigarette from employees but discovered it after a visitor had tossed it in.

"People often throw things into the animals' cages and the orangutan learns how to use these objects by seeing how people use them," they said.

The security officers claim they do not have the time to monitor what is going on constantly. Still, once the video went viral, they made sure that there were no more smokes in the primate's cage and any other enclosures at the institution.

Later, a local newspaper published many instances of individuals tossing trash into animal cages despite signs advising against it.

Numerous people have criticized the incident online, with one writing: "Poor thing locked up and copying human traits. I don't find funny just sad at what we do to these obviously intelligent animals."

Another said: "I guess someone showed the orangutan how to smoke. I've seen it done before. Appalling. I guess it makes the humans feel more powerful, that they've addicted this being to a harmful substance."

Poor thing locked up and copying human traits. I don't find funny just sad at what we do to these obviously intelligent animals.

"A visitor to the HCMC zoo caught on video last Friday a male Borneo orangutan expertly smoking a cigarette and stubbing it out on the ground. WTF," added a third.

The loss and degradation of the tropical rainforest in Borneo and Sumatra is the primary cause of orangutans' severely low population numbers.

The illegal animal trade, which has contributed to recent sharp declines in natural population numbers and worries that the species may become extinct, is another reason, according to the Orangutan Foundation.