The Worst-Dressed Celebrities At the 2021 Grammy Awards

The 2021 Grammy Awards were filled with a slew of trending red carpet looks, bold suits, and, of course, sleek footwear moments. We have rounded up the worst and loudest dressed stars of the night. 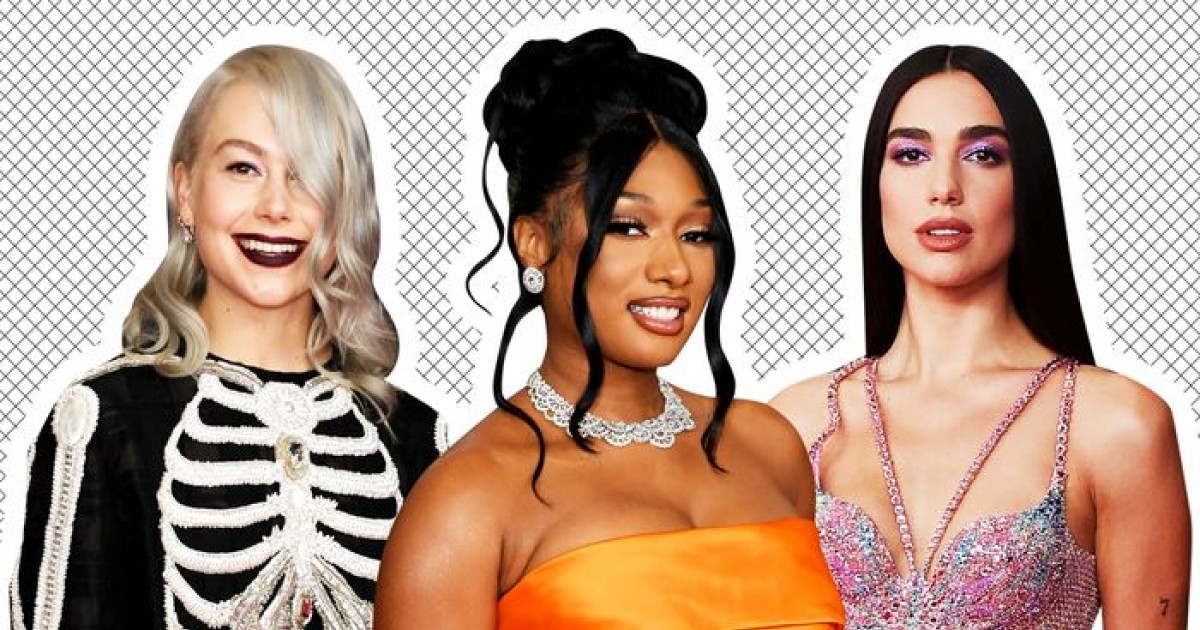 The annual Grammy Awards took place on Sunday evening, with several performers and nominees attending in person, while other artists joined the ceremony virtually from home.

This year's Grammy Awards may have looked very different amid the ongoing coronavirus pandemic - but that didn't stop its celebrity guests, both in-person and at home, from showing off some truly disastrous dresses. 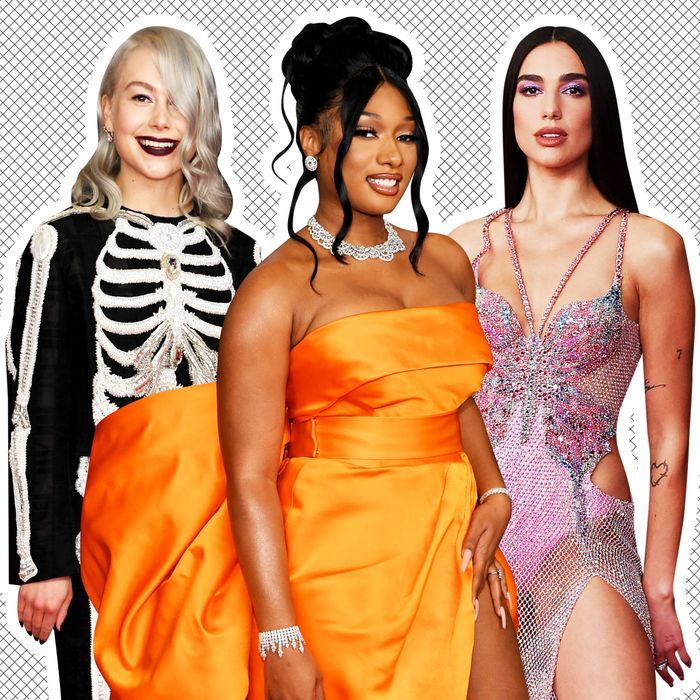 Noah Cyrus brought her standout taste to tonight’s show as she was up for Best New Artist. The couture look came courtesy of Schiaparelli and was not one to be missed with its added voluminous shoulder piece.

Miley Cyrus' sister Noah, who arrived on the red carpet wearing what looked like a white bed sheet that had been arranged in a puffy cape that rose up above her head and then fell to mid-thigh. Doja Cat, The 25-year-old was very difficult to miss in her garish green-themed, feather-embellished ensemble, which saw her flashing a great deal of flesh.

Doja Cat modeled a custom Robert Cavalli gown with a feathered trim and a low-cut unzipped bodice. While some praised her bold choice of attire other fans were questioning the look across social media and also were amazed by the daring neckline. 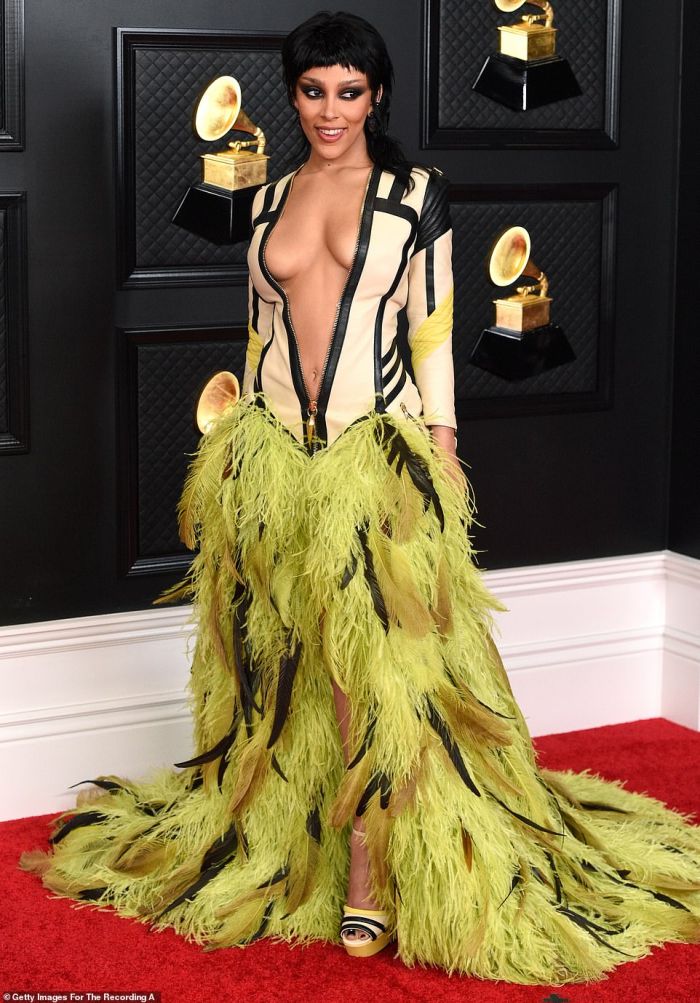 Harry Styles brought feather boas back from early 2000s pop styles. The “Watermelon Sugar” singer of course had to tap his favorite brand Gucci for his evening attire, modeling a mix of prints and accessories that left a few Twitter users disappointed.

The normally-dapper Harry Styles is known for pushing boundaries with his fashion, but his post-performance ensemble made him look decades older than he is, thanks to the velvet pants and granddad-style sweater 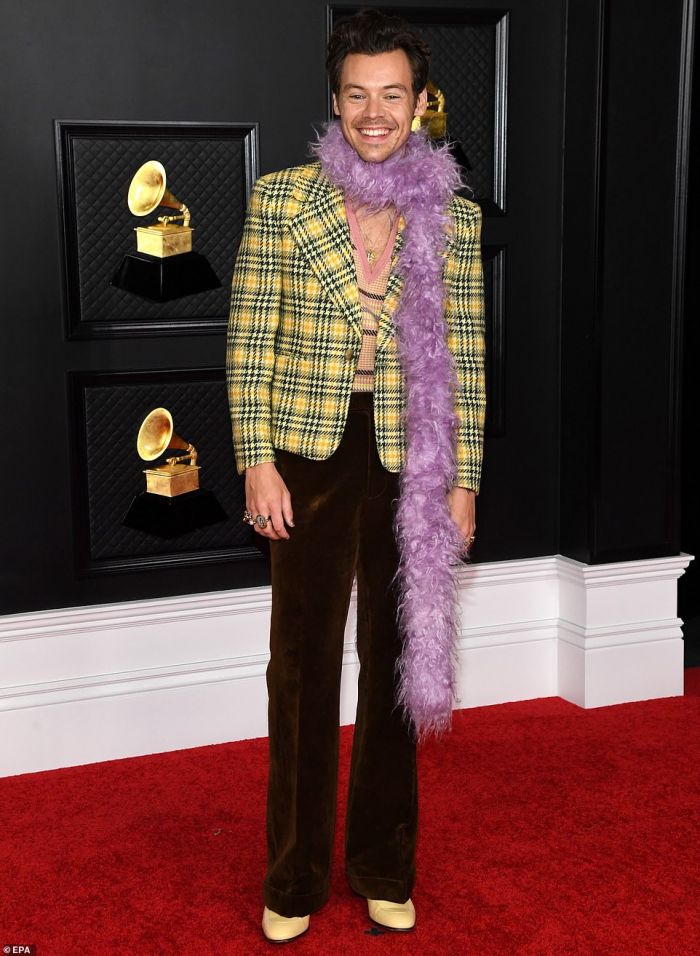 Singer Phoebe Bridgers wore what looked like a Halloween costume. This is not the first time Phoebe Bridgers has worn a skeleton-y look, but she said she saw this Thom Browne dress forever ago and “thought it was so cool.”

The dress featured an embellished skeleton design that moved right along with her down the red carpet. She paired the look with black lipstick, which left the singer looking much more eerie than elegant. 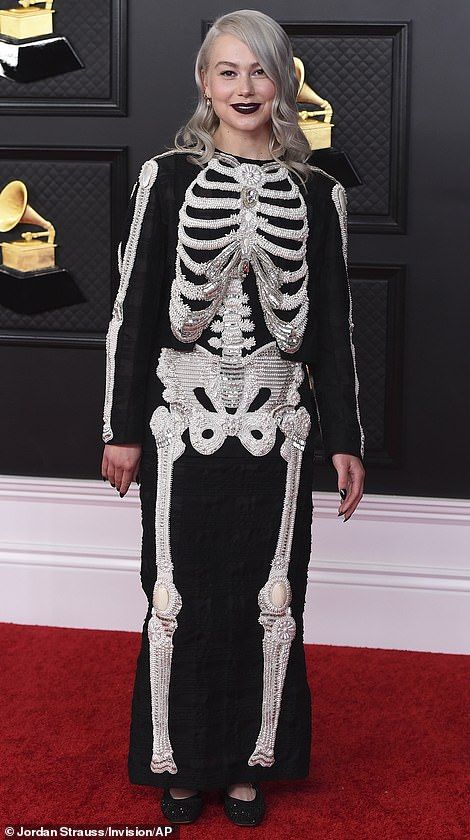 Julia Michaels, wore this intense black and white Georges Chakra Couture design. The strapless black frock featured some massive white 3-D origami pleated floral details down the skirt all the way to the edge of the train.

Julia Michaels' dress featured some very unfortunate white embellishments that could easily have been mistaken for old tissues. 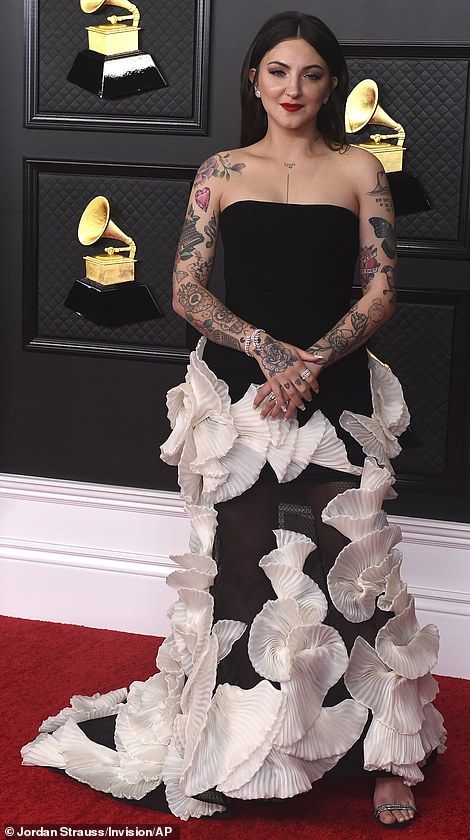 Showing off their sisterly coordination, Haim arrived in matching periwinkle Prada designs each with their own personal twist. From 2000s-chic pants to cutout-sleeved dresses, all three members of the band slipped on the same set of kitten heel slingback pumps. The unique silhouettes, though, had many thinking three strikes and you’re out. 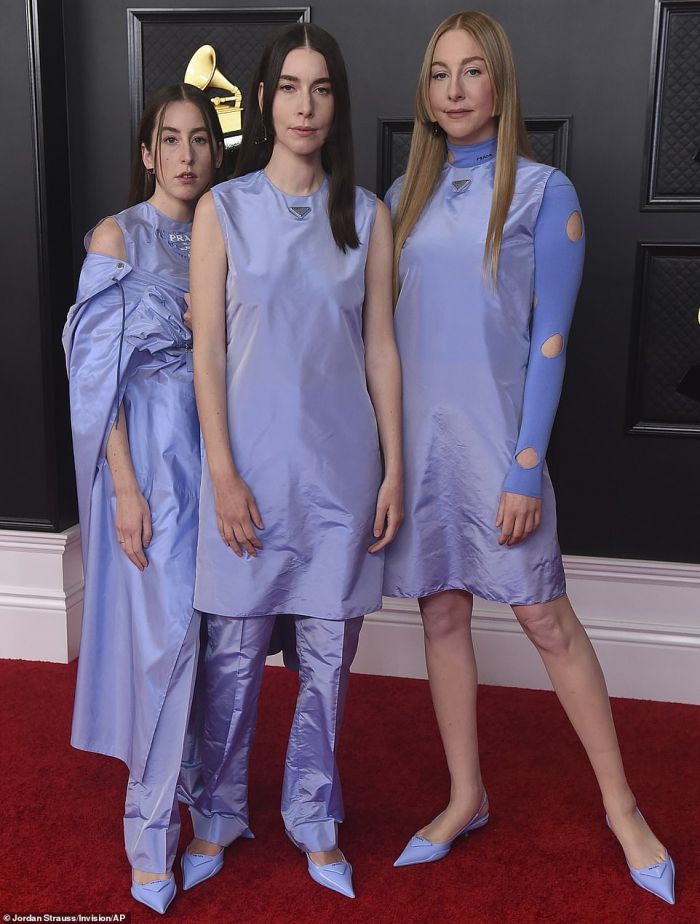 Our next big fashion miss comes from Debi Nova who donned this disastrous Georges Chakra gown on Grammy night. This hot pink dress featured one of our least favorite silhouettes — the dreaded high-low hemline — a train and a haphazard purple floral print down the skirt.

Costa Rican singer Debi Nova, completely missed the mark in a garish and tacky pink dress with printed purple flowers all over it. Her ensemble, which was completed by several choker necklaces, left her looking more like she was bound for prom than a premiere awards show. 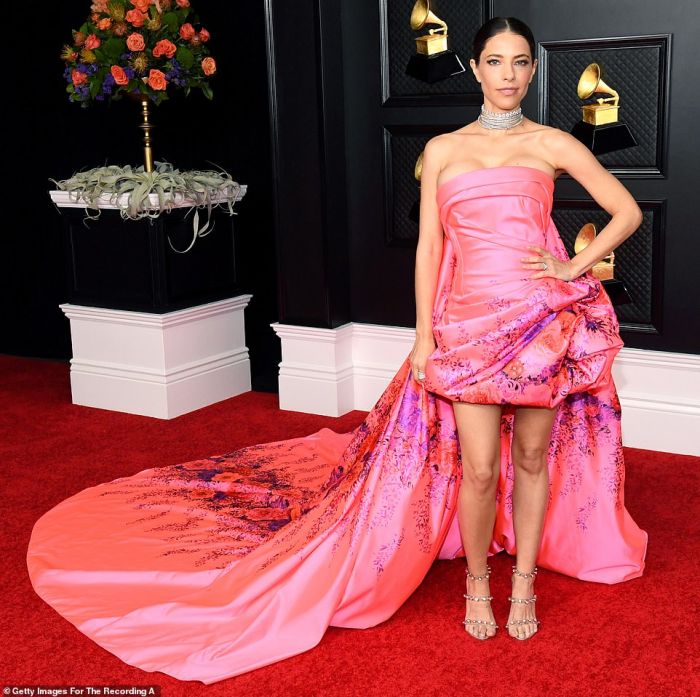 Bad Bunny brought 2021’s biggest combat boot trend to the red carpet for the Grammys, matching a chunky lace-up pair to a fresh-off-the-runway Burberry coat and pleated dress. When it came to accessories, though, a selection of fans believe that his statement hat missed the mark.

The most comfortable star at the Grammys? That probably goes to Chika, who arrived in this teal, pink and purple jacket and sweatsuit combination from Nike. Though it was too casual for the occasion, we did appreciate her dedication to spring-inspired pastel hues.

Rapper Chika looked more like she was getting ready to chill on her couch than attend a glamorous awards show - and while she should be applauded for wearing a face covering, the mask's ruffle was a slightly odd addition. 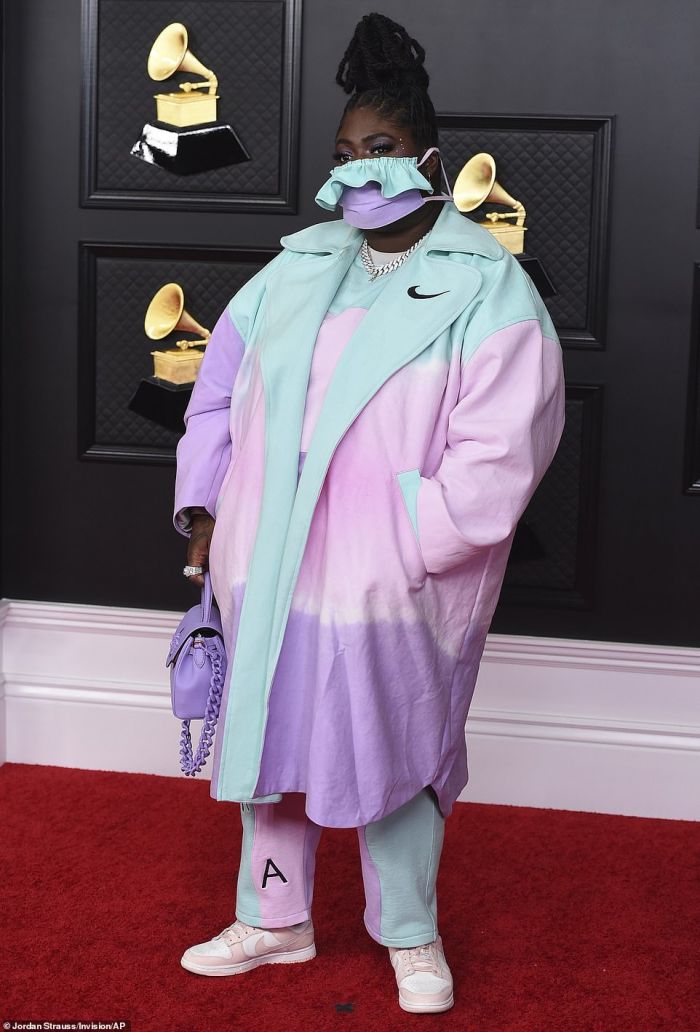 If the semi-sheer minidress on wasn't already a mistake, adding those thigh-high white and snakeskin boots certainly was! Mapy arrived in this unfortunate getup and scored herself a serious fashion miss in the process.

Violinist Mapy flashed a little bit too much in her semi-sheer dress, which left her black underwear on show. 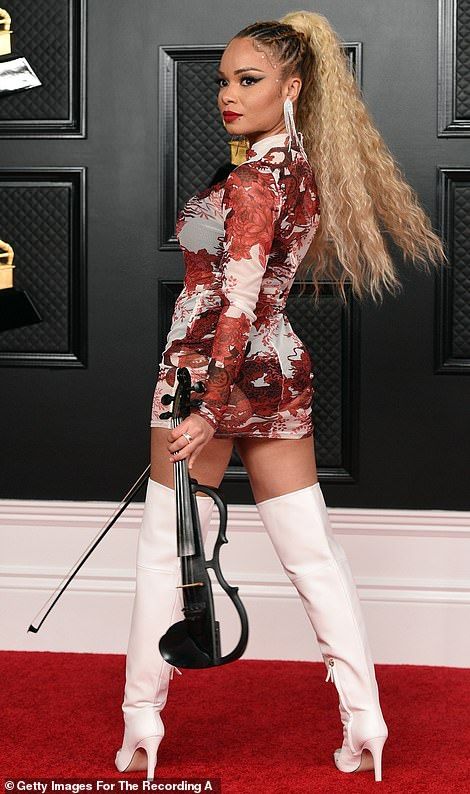 Though we love her music, we weren't fans of Mickey Guyton's Grammy gown. The star's frock featured a tan spaghetti strap gown underneath a sheer overlay with a tie detail at the neck and butterfly appliques over top for a dress that, while pretty, didn't feel Grammy worthy.

Country singer and nominee Mickey Guyton missed the mark in her sheer floral dress - which was matched with a poorly-fitting nude slip underneath. 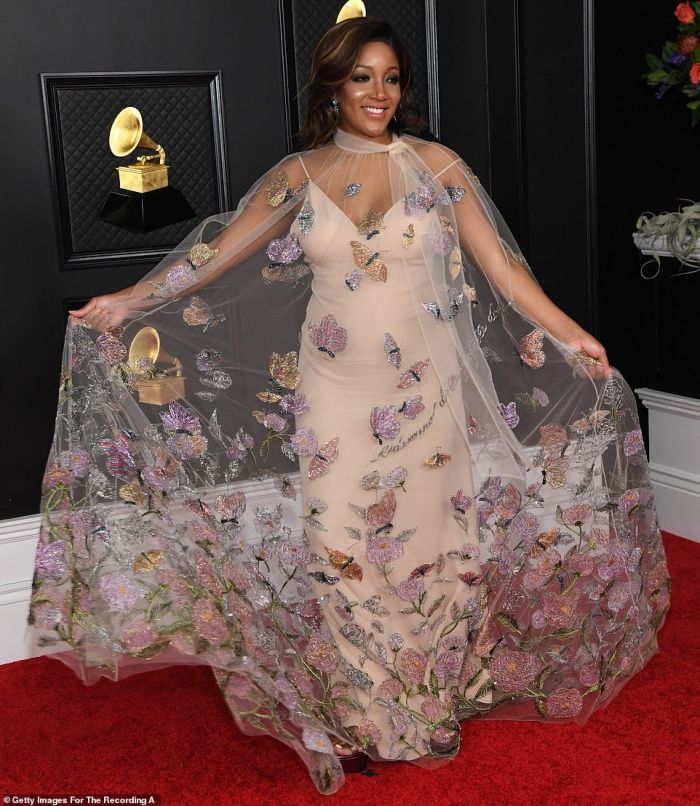 DaBaby in head-to-toe Dolce&Gabbana? A match made in heaven! The rapper arrived in this bold patterned suit by the fashion house and added a red and green top hat, shimmery golden turtleneck and layered necklaces.

DaBaby's patterned Dolce&Gabbana suit also included brooches with the designer's logo fastened to the lapels. He added some extra sparkle to the mix with layered diamond necklaces and diamond earrings.

DaBaby's patterned suit could have been dapper had it not been for all of his over-the-top accessories.

Jhay Cortez's baggy shorts made him look like he was wearing a poorly-fitting school uniform.

Megan Thee Stallion made a serious statement in this Dolce&Gabbana design with a dramatic bow detail down the back. She completed her look with studded orange sandals and some seriously stunning jewels.

When it came time to add jewels, Megan Thee Stallion selected these dazzling diamond pieces by Chopard! Her jewels included these stunning earrings with 4.02-carats of diamonds and a necklace adorned with a whopping 91.70-carats of diamonds. 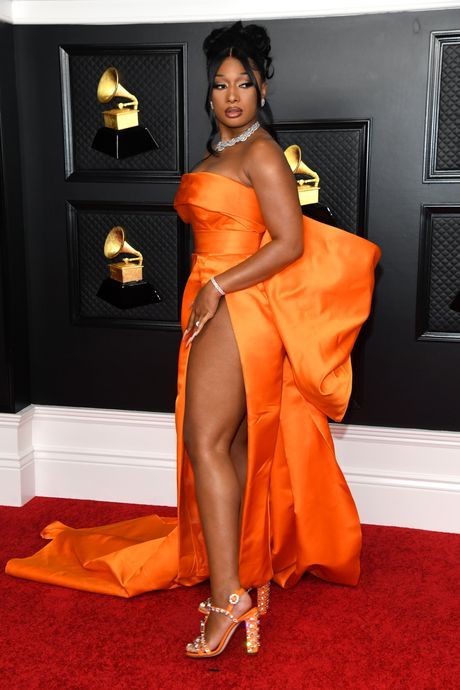 Dua Lipa slayed the Grammy red carpet in this slinky Atelier Versace gown. The star gave us vintage Cher fashion vibes in this embellished semi-sheer frock with a thigh-high slit.

A closer look at Dua Lipa's stunning Versace gown shows that there's a butterfly motif down the bodice. The subtle nod was on purpose, as she told E!'s Giuliana Rancic earlier in the night, "Butterflies have had like a lot of symbolism for me this year, and it's actually got a lot of symbolism for Versace too." 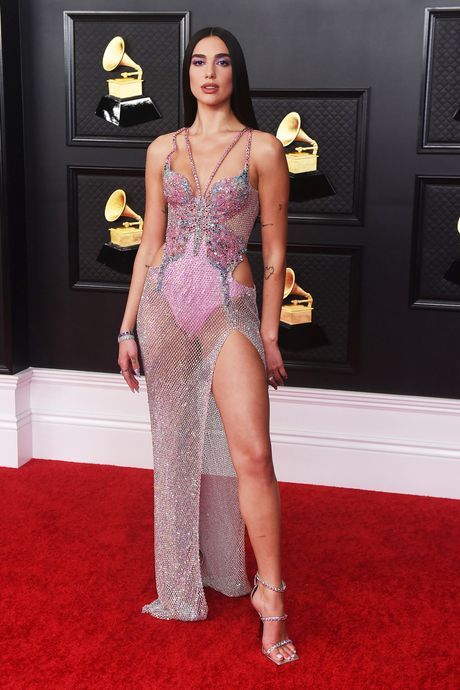