Posted by Annie N. in Relationships On 18th August 2021
advertisement

This father was feeling proud of his sons and decided to post about it. He didn't expect the world to celebrate the great bond he shares with his sons along with him. People are getting emotional seeing how much he cares for his sons. 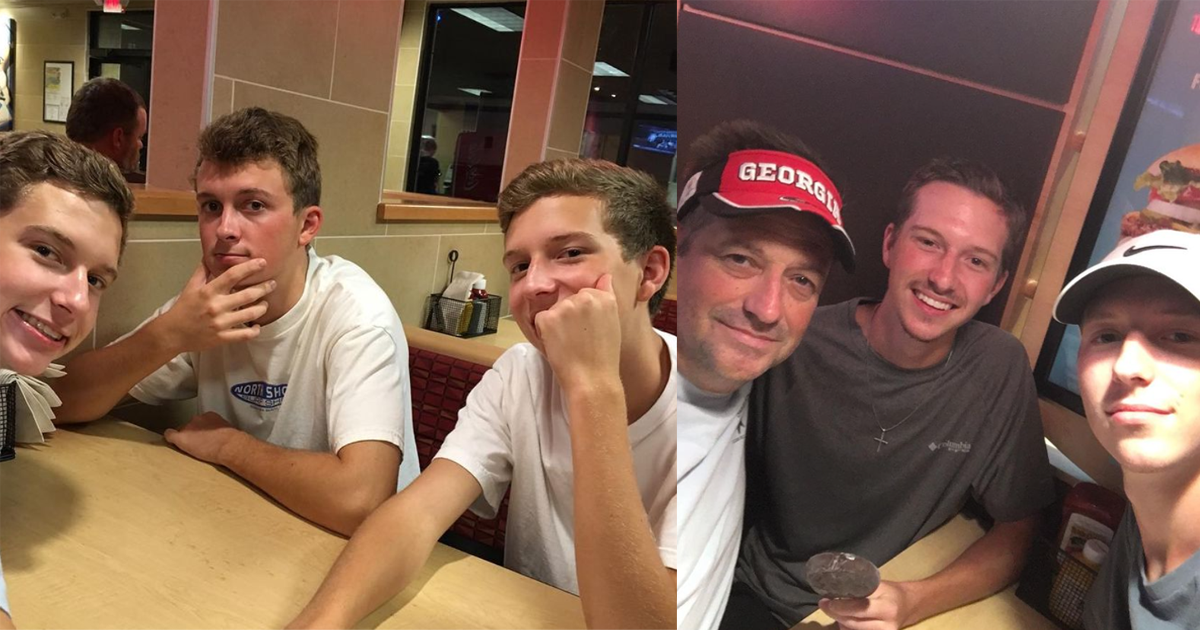 When Brandt Barber, 57 posted a picture of his three sons on social media, he was just trying to be a good and appreciative father.

This little act of love however spread like wildfire as the messages started pouring in making this little family go viral.

In the post, he shared the story of a tradition that he has with his sons. This is what he described in the now-viral caption.

“So me and my boys have had a weekly tradition going back years now, where once a week or so we would go to DQ after dinner. We would sit at the same table and order from the same little old lady, never deviating from our routine. We lost one of the team to UGA That year, here we are last pic at DQ before Brooks headed to be a big college boy.”

He then shared another picture of him with his other two sons because one of his sons had left for college and couldn’t really keep up with their weekly tradition anymore.

“And then there were 3. DQ tradition continued but our numbers while strong were dwindling. Me with Bryce and Luke at DQ. Soon they will head to college what then……..”

The story continues with Brandt posting another picture of just himself at the Dairy Queen when all of his sons had moved away.

“And then there was 1. DQ was never really the thing, spending time driving to and from and talking, listening to their music and watching all of them interact as brothers, now that was the thing. Maybe I’ll get by here every now and then and certainly when they are all home but with them not here it’s just ice cream. 🙂 “

It was when his son posted screenshots to Twitter that people fell in love with his dad.

Why did my dad have to go this hard on insta and why am I crying in Nashville rn pic.twitter.com/Bv7fCfnE2g

People were amazed and touched by the loving relationship Brandt shares with his sons and sent him much love on the internet.

"WHY AM I CRYING HES NOT EVEN MY DAD"

WHY AM I CRYING HES NOT EVEN MY DAD

This person decided to volunteer to share DQ with the dad so he wouldn't have to sit alone.

"I WILL MEET YOUR DAD AT DQ"

I WILL MEET YOUR DAD AT DQ pic.twitter.com/Z4wIs3GEQj

This person got us even more emotional pointing out just how pure and wholesome this moment really was.

"I’ll never know what’s it’s like to have a dad, but I’m glad you can live to savor these moments. Treasure them. Not everyone is blessed with this opportunity."

I’ll never know what’s it’s like to have a dad, but I’m glad you can live to savor these moments. Treasure them. Not everyone is blessed with this opportunity.

For people worried that the dad was left hanging at the DQ, his son responded and said that yes, he was about to make plans to visit his father soon and reunite the DQ gang.

"To give everyone some piece of mind, my dad and I have an incredible relationship and yes my little brothers and I will be heading back to DQ with pops soon"

To give everyone some piece of mind, my dad and I have an incredible relationship and yes my little brothers and I will be heading back to DQ with pops soon