This Guy Was Tried For A Scam Of $950 Gaming PC And $400 In Cash, The Scammer Gets Mercilessly Trolled Instead

Things can go hilariously wrong when the scammer instead of cheating on the potential client gets caught in his own trap and gets mercilessly trolled for his failed attempt. 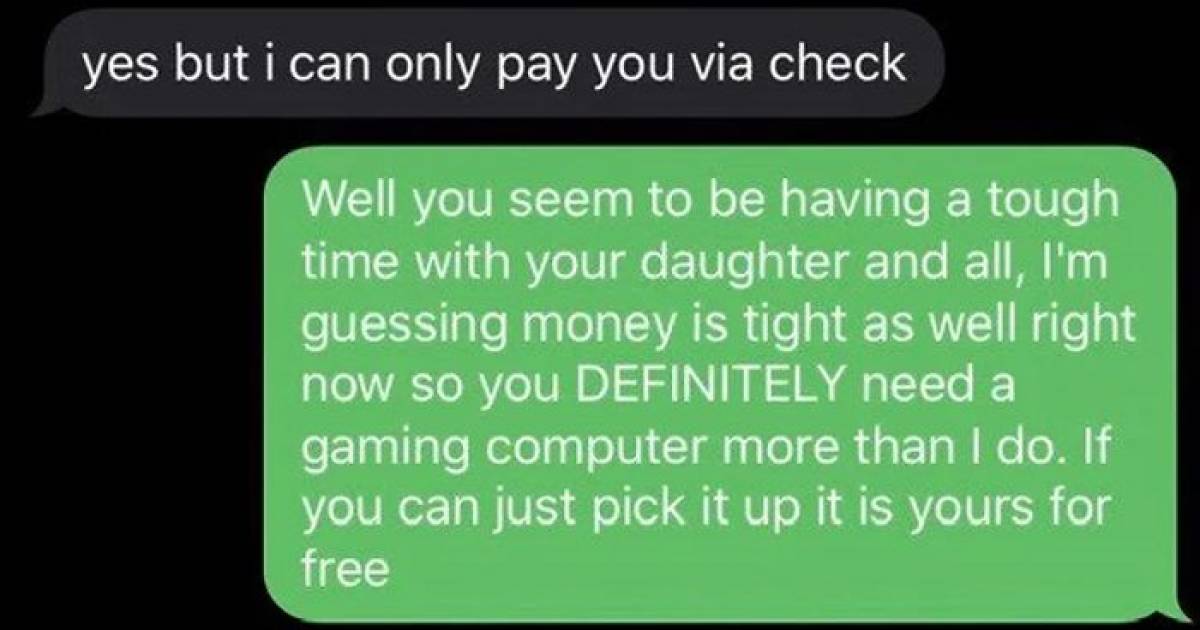 #1 The online world is full of scammers.

One thing we honestly despise is scammers trying to cheat us for our hard-earned money. And sadly the world of Internet is full of these people. Even though one is warned many times for these scams and beware to not fall for these online scams but oh well, sometimes mishaps happen and even the smartest person can become a target of this unwillingly and unknowingly. 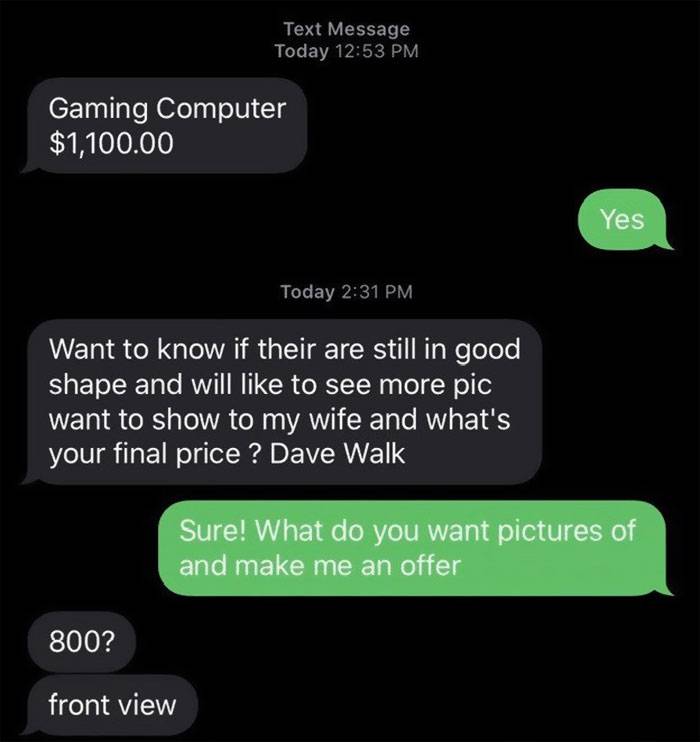 The only plus point is that sometimes these scammers are not very bright and can fall for their trap if they come across a person who knows how to tackle them.

#2 ShankABee was approached for his gaming computer.

This guy who texted a Reddit user ShankABee because he wanted to buy his gaming computer and created the dumbest excuse for why he can’t pay for it in cash. Luckily, the seller didn’t fall for his lies and decided to troll him.

The conversation when posted online was so hilarious that it even went viral. 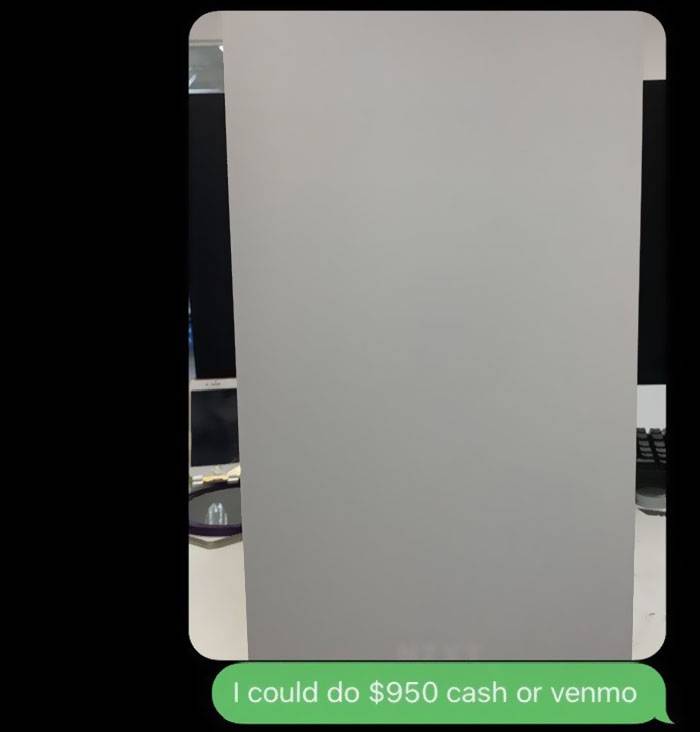 Xander in his interview to Bored Panda told them that it’s not the first time he’s dealing with the scammers online, “but it is the first time I decided to see where it would go,” he said. The computer seller said he knew something was off with this guy from the beginning. “I had suspicions right off the bat when he asked for pictures that were already on the ad”.

#3 Coming up with all sorts of excuses to not pay.

The scammer's feeble attempts to make excuses for not paying cash were quite obvious. “typically they would offer more than the asking price,” he says, it all became clear when the buyer started making excuses for why he can’t pay in cash. “I honestly chuckled a bit that he was trying to say he had his account hacked so he couldn’t pay in cash.” 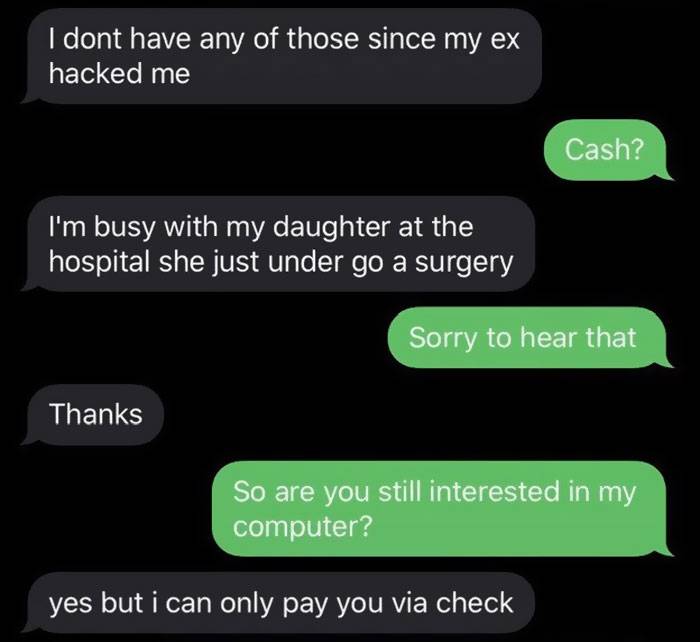 #4 Things get a bit funny and mixed up when the seller gets interested in the buyer's daughter.

Whether the part about his daughter is true remains unclear. Xander even did a couple of reverse image searches but he didn’t find anything. “Unfortunately, it seems like this guy was taking advantage of his (possibly) daughter.” 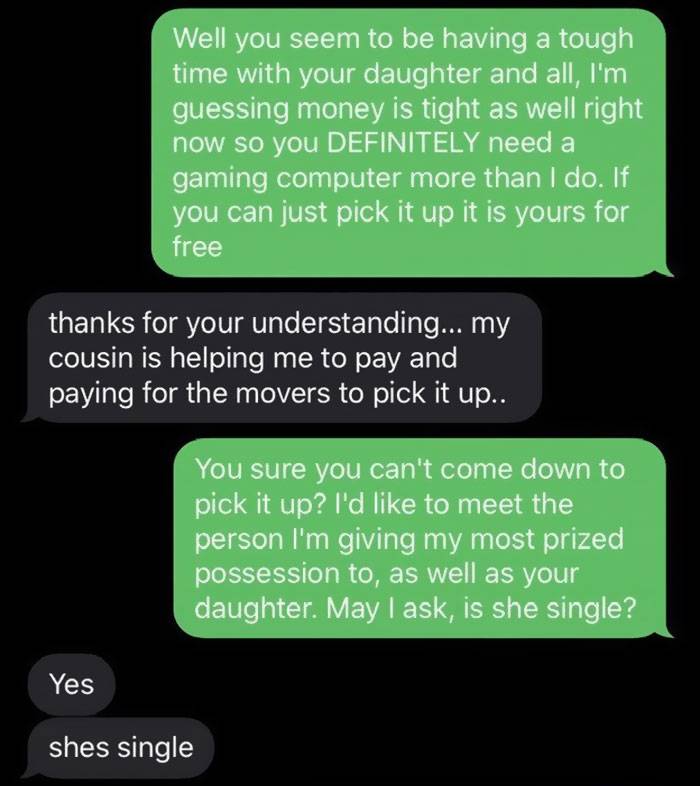 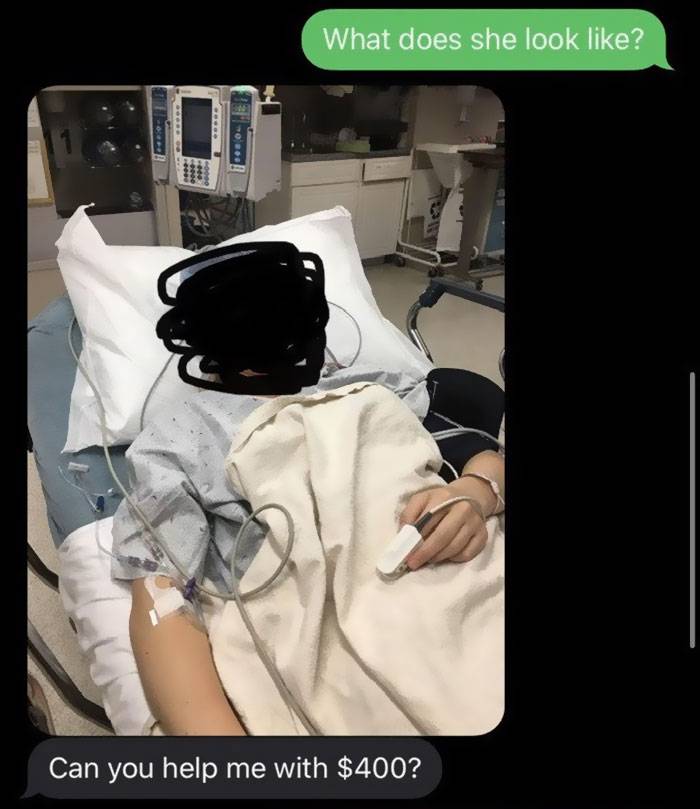 #6 The conversation was going full swing from both sides and it was hilarious! 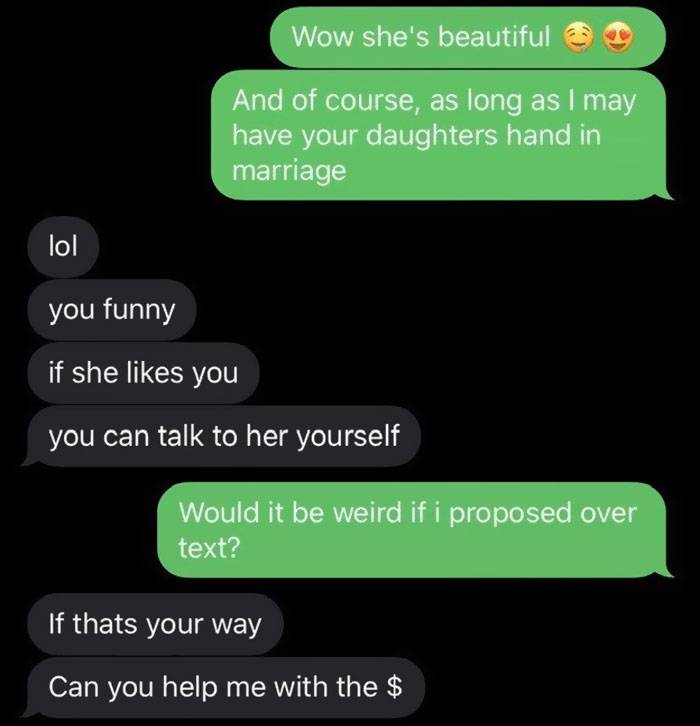 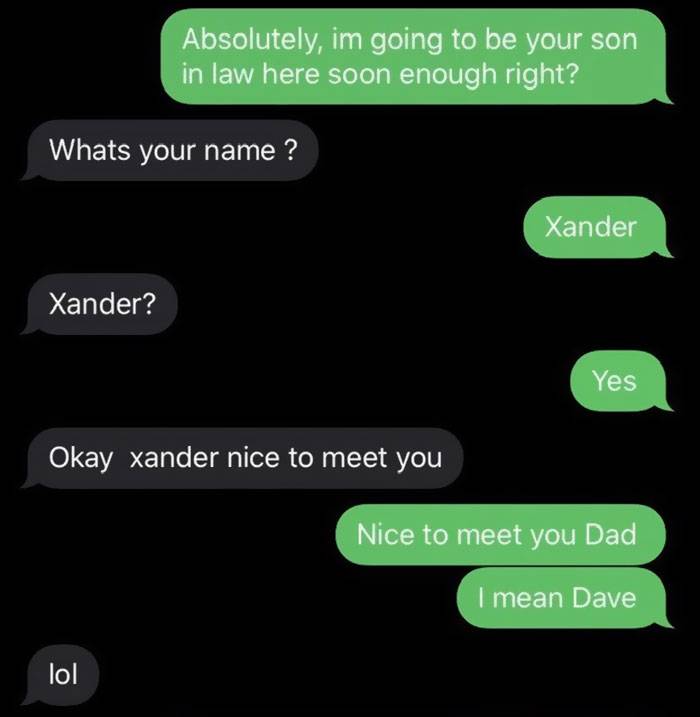 #8 The scammer sent a clown emoji as his last reply to Xander, so we assume that he was probably amused by the exchange they had, too. 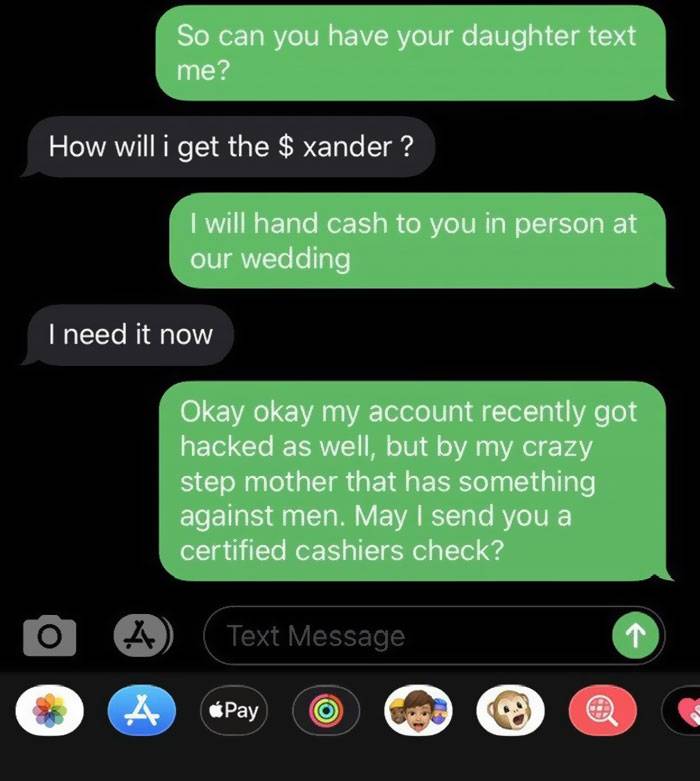 #9 This is how the Internet reacted to the troll and hilarious exchange between the two strangers. 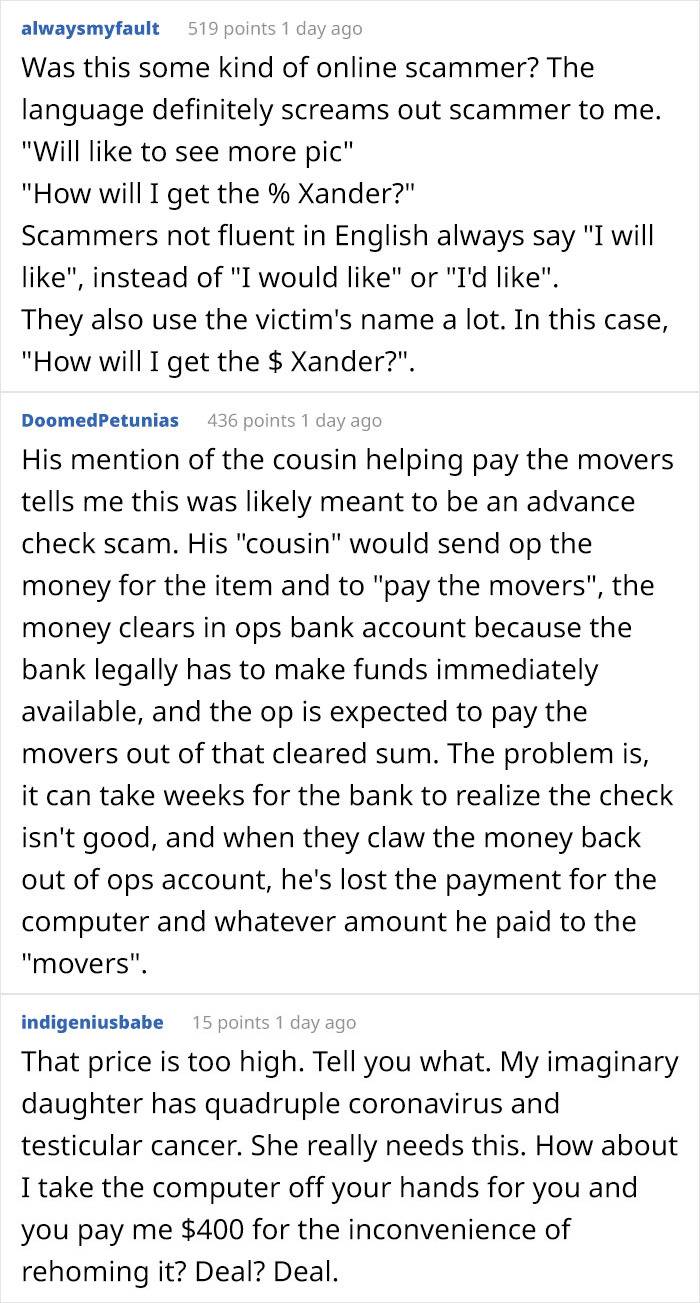 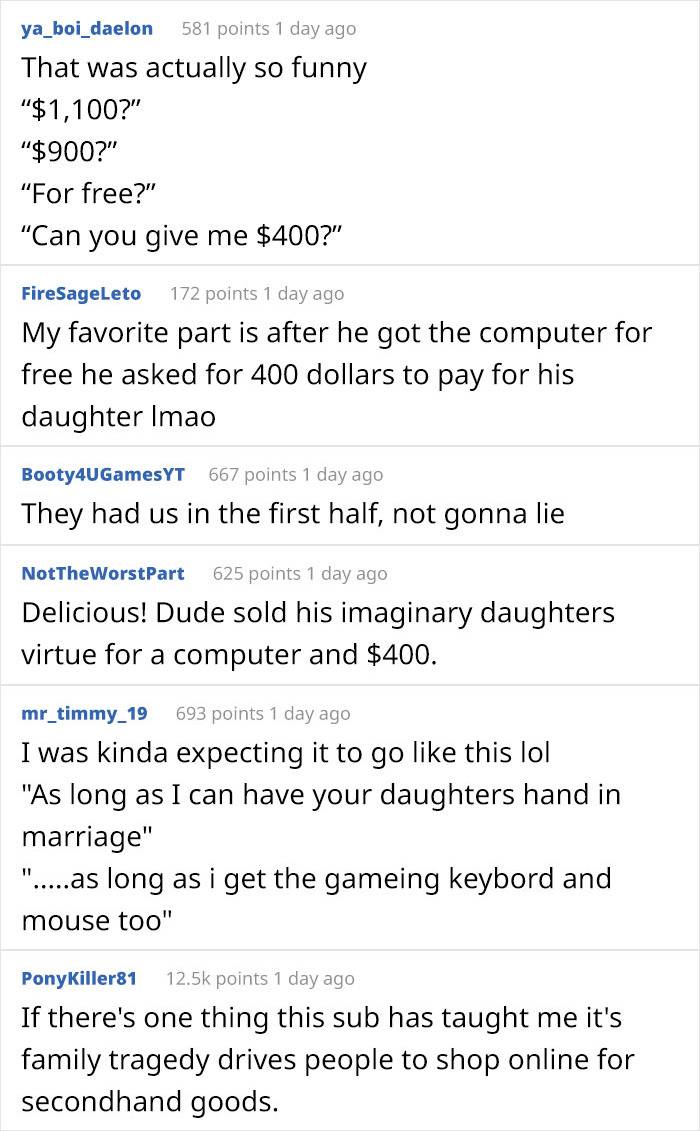