Posted by Zainab Pervez in Funny On 12th January 2021
ADVERTISEMENT

After the shocking incident of US Capitol riots, there's an influx of memes. Among these are the recent ‘How It Started Vs. How It’s Going’ memes of the arrested rioters and they are giving us a good laugh. 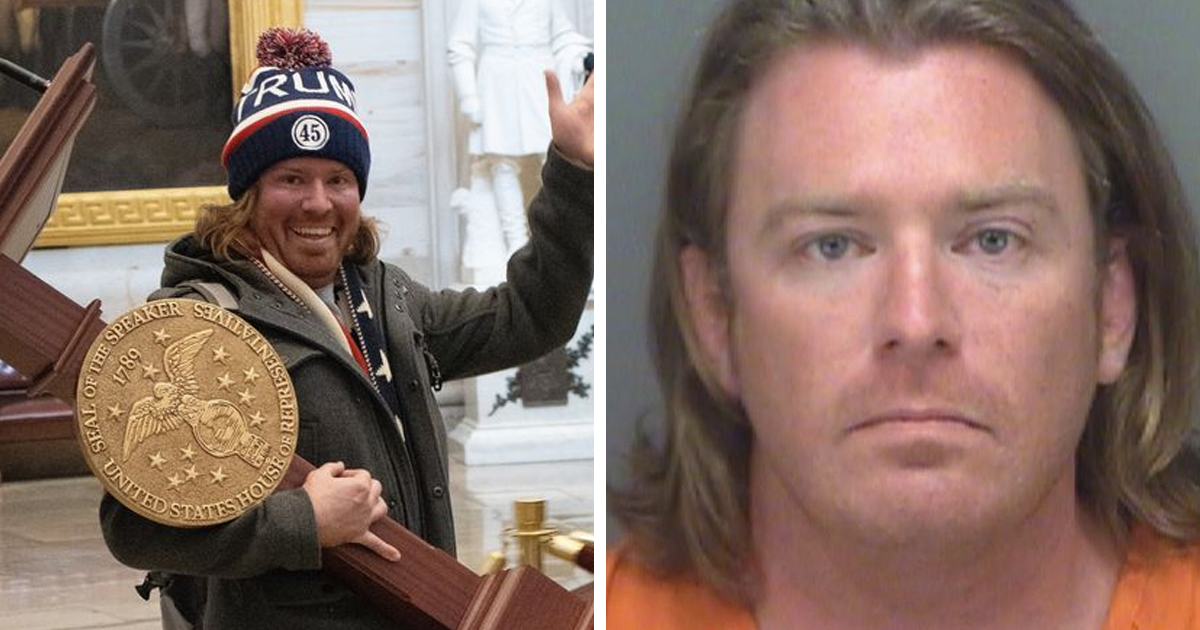 They aren't so confident now

The world was shocked after the act of 'domestic terrorism' happened in Capitol Hill when thousands of rioters attacked the U.S. Capitol building in support of Trump on January 6th. The rioters armed with “Make America Great Again” caps, military-style gear, flags, and, allegedly, zip-tie restraints breached barricades, smashed windows, and ransacked the Capitol building.

But now the rioters are being identified and arrested, there is a meme trend of “How it started Vs. How it’s going” on social media where people are sharing side-by-side images of Trump supporters during the Capitol ordeal versus their mugshots. 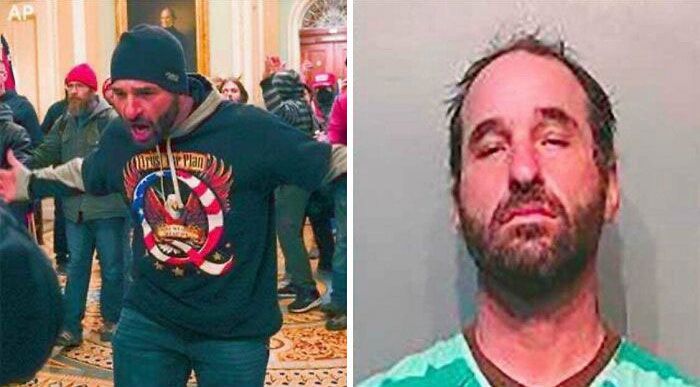 Where is the smugness gone? 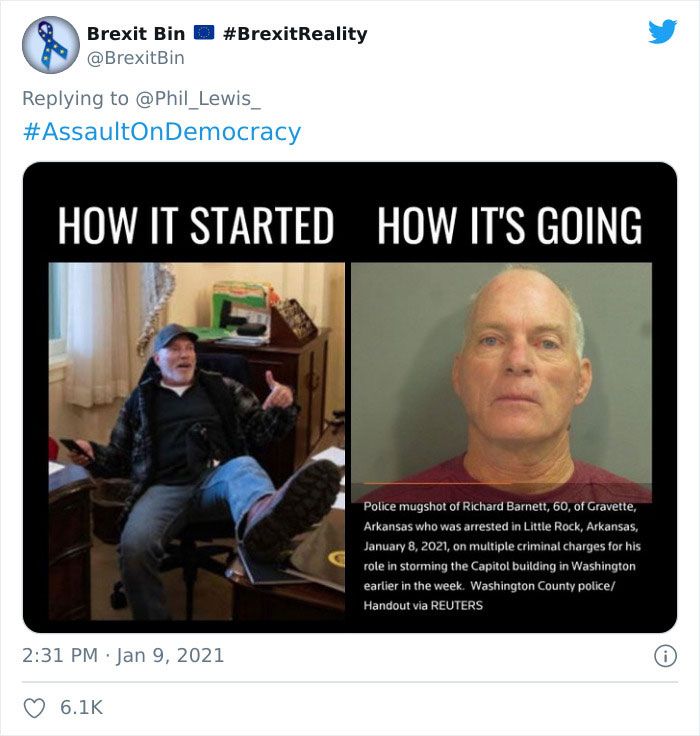 They don't look so 'cool' in a mugshot 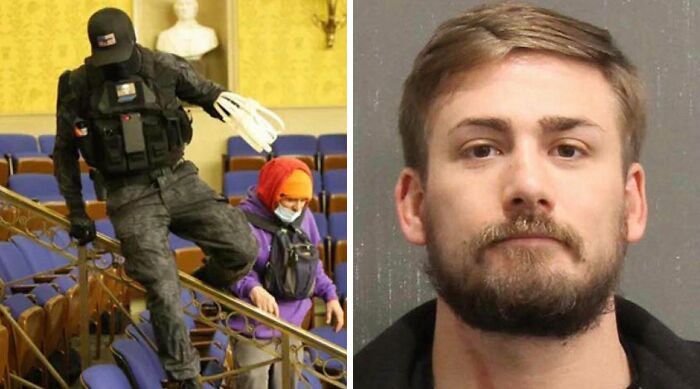 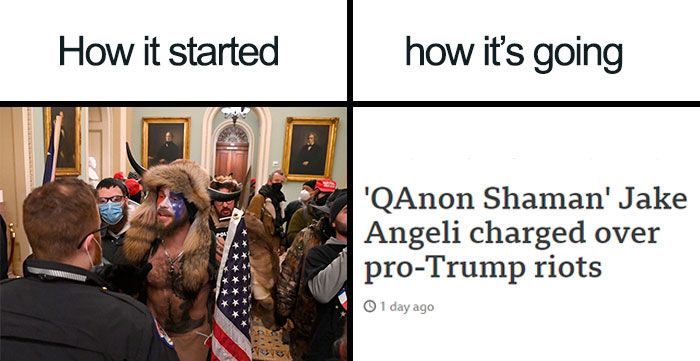 “Where did his smile go?” 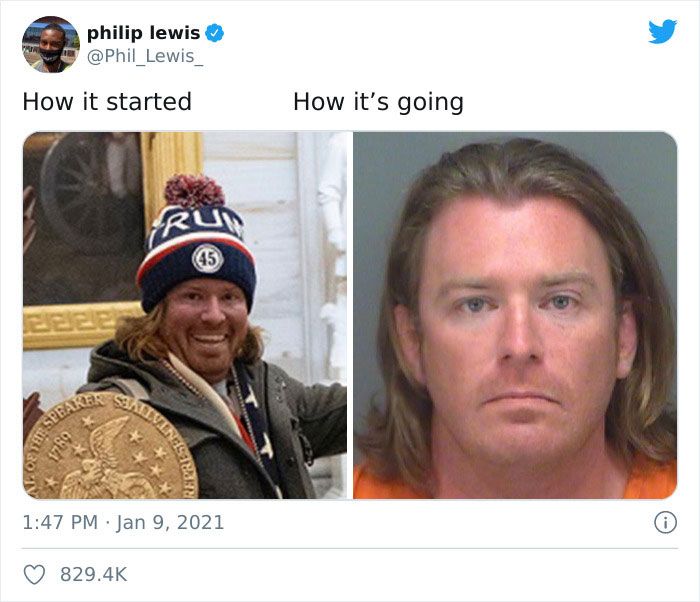 It looks like the other guy is riding on his back

The US Capitol Police is now having its staffers put in “24-hour shifts” to identify the suspects while browsing through evidence online and saving it before it can be deleted. 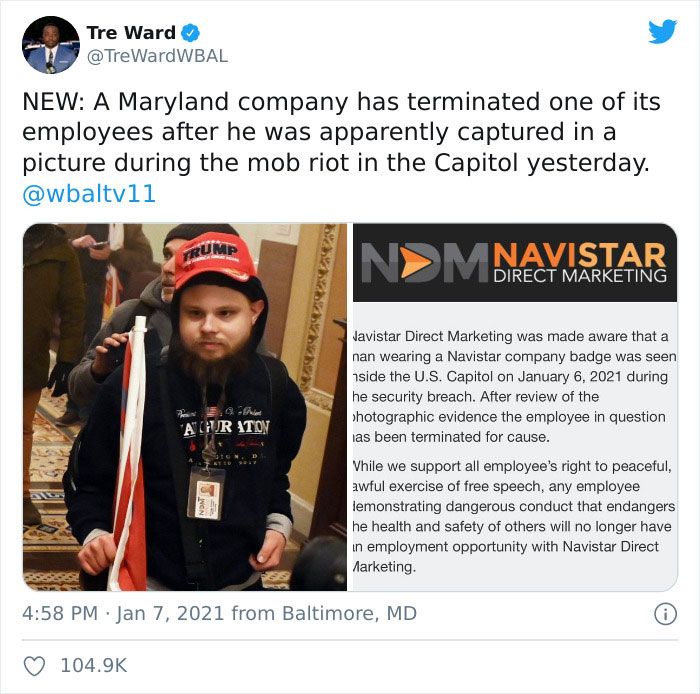 Not so patriot now, are we? 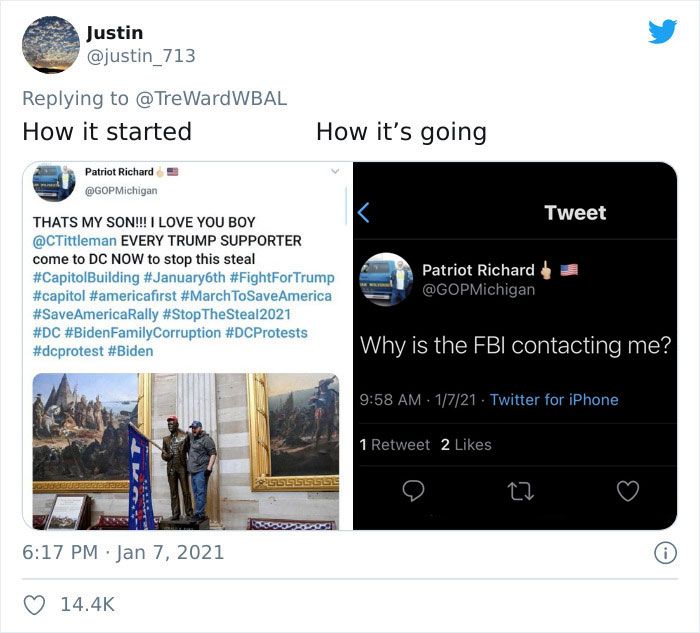 The Trump supporters who stormed the US Capitol, leading to five fatalities, will not remain unpunished. According to the US attorney for the District of Columbia, Michael Sherwin, “hundreds of people may ultimately face charges” related to the riots.

Others pointed out that rioters employed a ‘shave disguise’ method, which shows how 'genius' they are

There’s likely to be “a wide array of criminal charges, ranging from destruction of federal property to murder.” The police is also expecting to find evidence of coordination among the rioters, which is evident from their shave disguise.

People made fun of their method of disguise

Apparently they think people don't have eyes, or brains!

Most of them appear to be anti-maskers, which could be a better disguise

Simply putting on an obligatory face mask in times of pandemic would have helped not to be identified, but the rioters were too cool for that.

People are hoping for maximum punishment for this crime 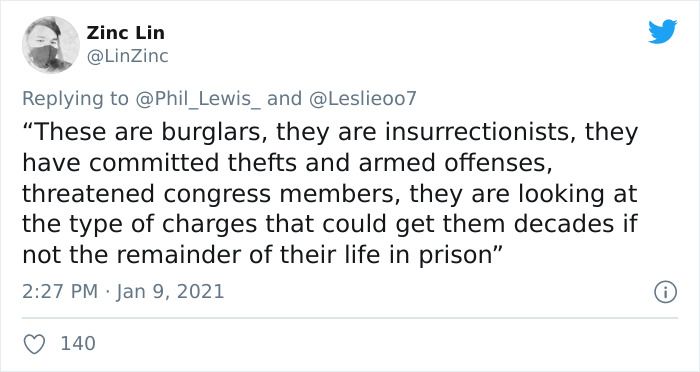 Trump won't be here to save them now

Philip Lewis, a senior front page editor at HuffPost says, “The president that you’re willing to ruin your lives for couldn’t care less about what happens to you.”

People are expressing their joy and satisfaction on seeing the rioters being captured through tweets and memes, and hoping that justice gets served to them.