This Retriever Is Obsessed With Giving Hugs To Everyone She Meets

Posted by Editorial Staff in Nature and Travel
ADVERTISEMENT

Whenever Cesar Fernandez-Chavez walks his dog Louboutina in Manhattan, it's never an ordinary walk. Within minutes of hitting the sidewalks, Louboutina, or Loubie for short, wants to stop, greet people and then hug them, wrapping her forelegs around their knees. She makes people feel happy with her sweet hugs and it also makes her feel happy to show her affection. 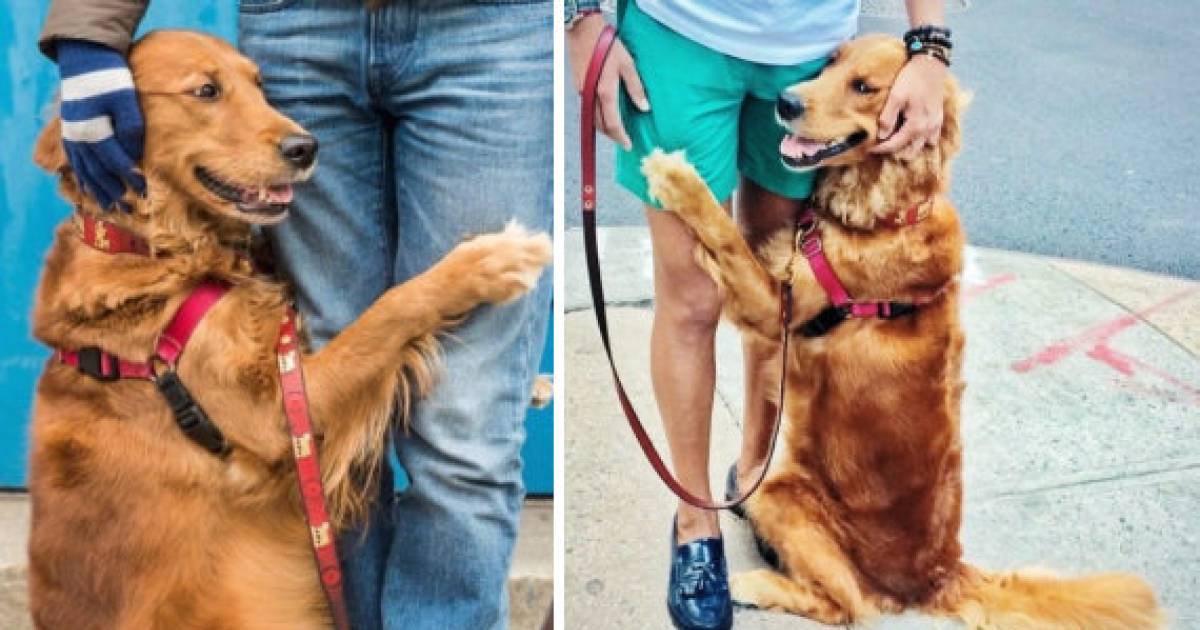 He says she just started doing this on her own. It all started when she began holding hands and now she can't stop hugging. And she loves to hug almost everyone she meets. 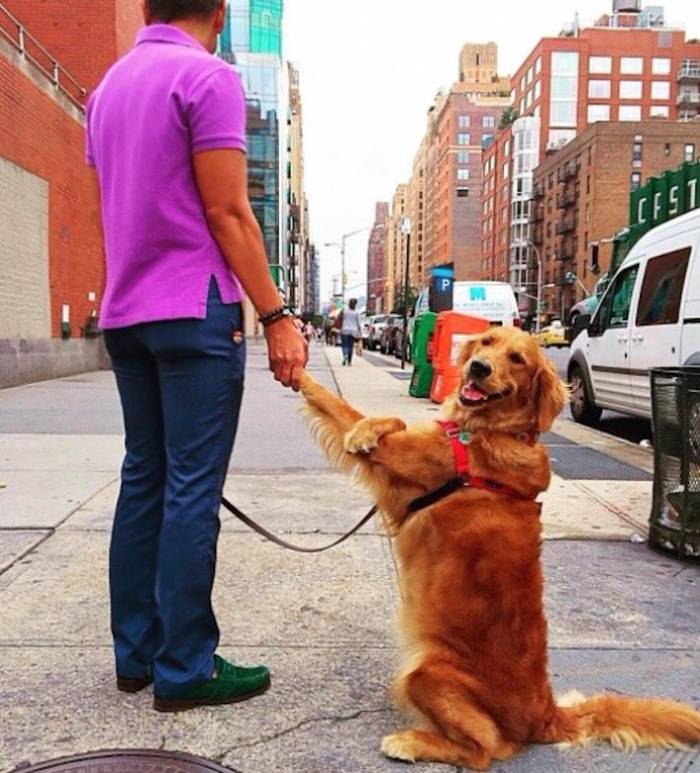 #2 She Started By Holding Hands First

Before Loubie started giving hugs, she wanted to hold hands. That tradition started around Valentine's Day in 2014, shortly after Fernandez-Chavez had ended a long-term relationship. “She started sitting up and grabbing my hands with both of her paws, and then crossing the other paw over her paw,” Fernandez-Chavez said. “I remember joking with my friends, ‘At least I have someone to hold hands with during Valentine’s.'” 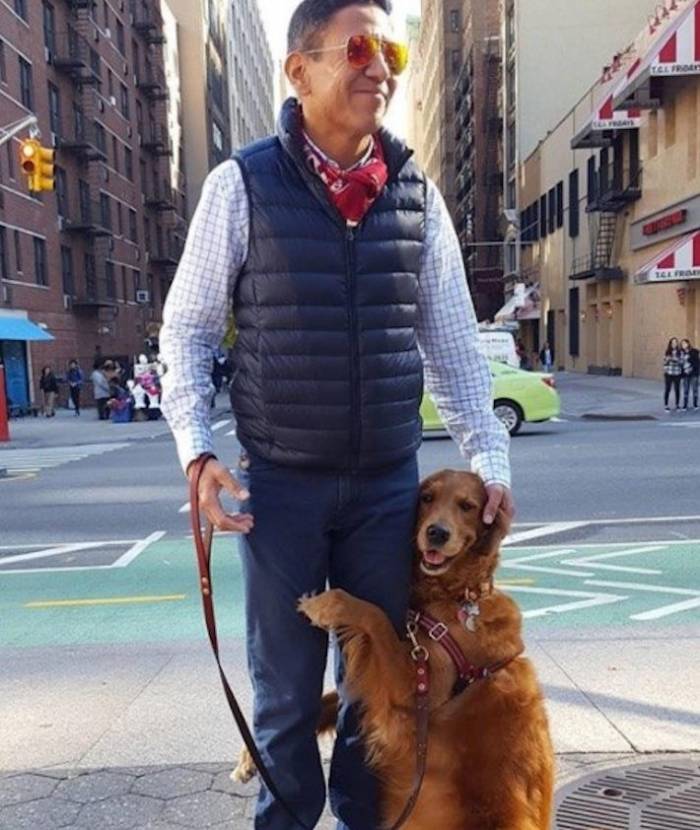 #3 She Then Tried Holding Hands With Strangers In NYC

Before long, Louboutina, or as she likes to be called, Loubie, was holding hands with everyone and even stopping on their daily walks to try and hold hands with strangers as they walked through the Chelsea neighborhood in New York City. 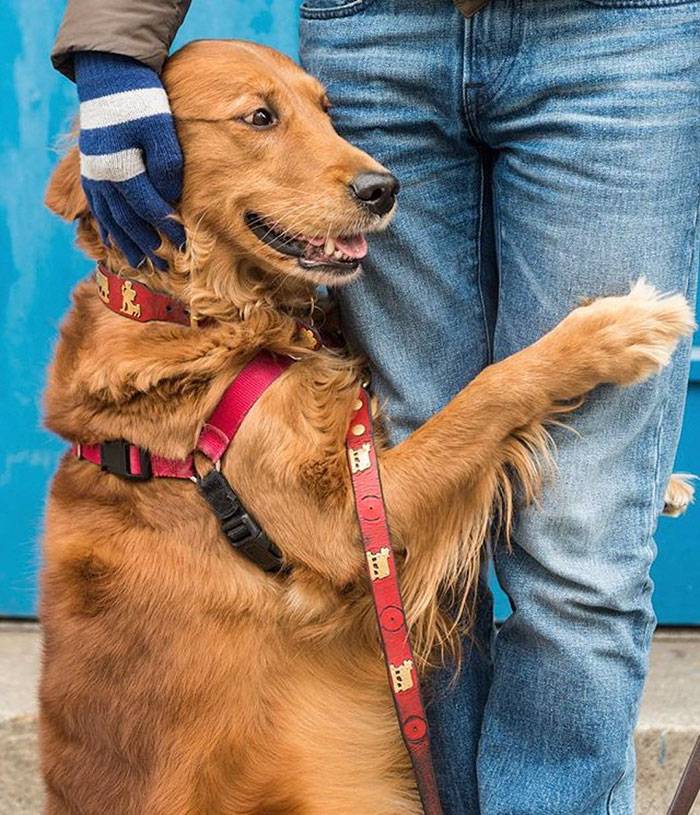 "From then on, every walk, she wanted to hold hands," Fernandez-Chavez says. "She would just sit up and cross her paw over the other, and look around like a lady. People passing by were like, 'Oh my god, she's so cute.'"

After getting several regular handshakes from neighbors, Loubie then began stopping random people and showing her affection in a different way by hugging them with both her paws wrapped around their legs. 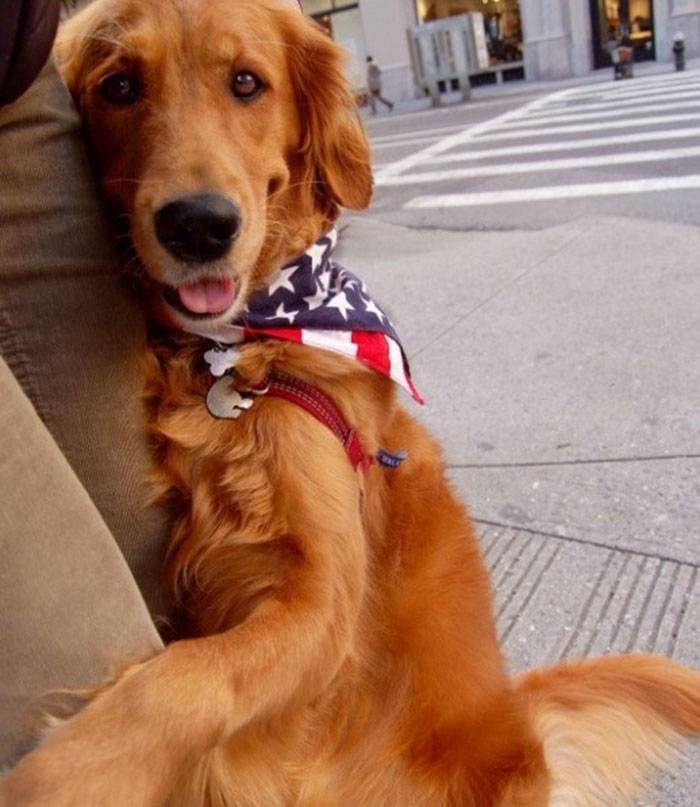 "Instead of asking me to do the holding hands thing, she just sat up, very close to my legs, and she'd wrap her legs around my knees," Fernandez-Chavez says. "I thought, 'This is weird. What's going on?' But I let her do it." That's when she began trying to get a free hug from people walking by.

She would hug just about anyone who would stop and let her do it. She would hug for so long, it seemed like she didn't want to let go of their legs. Often, once the person brushed her head or ears with their hand she would look up at them then stop as if she was acknowledging their appreciation for her hugs. 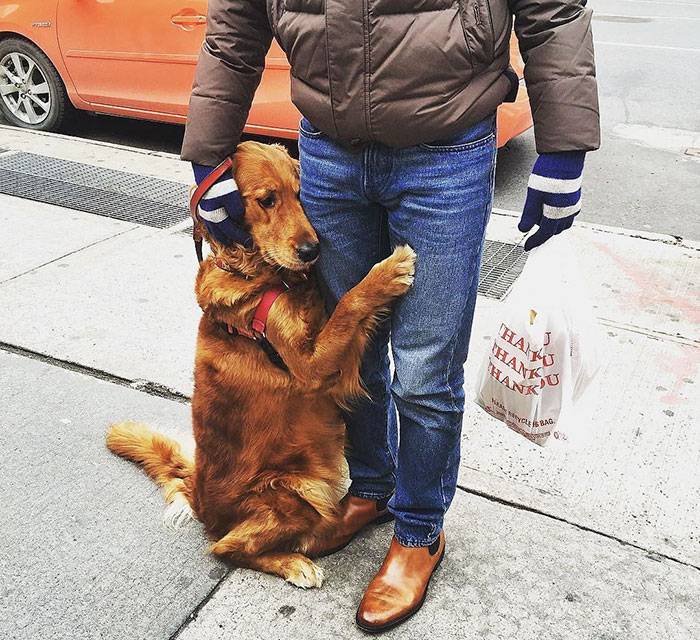 "We'd run into neighbors that she knew," Fernandez-Chavez said, "and instead of just leaning on them, she started hugging them, and then random people who would come to us." Before long their walks became longer and longer. 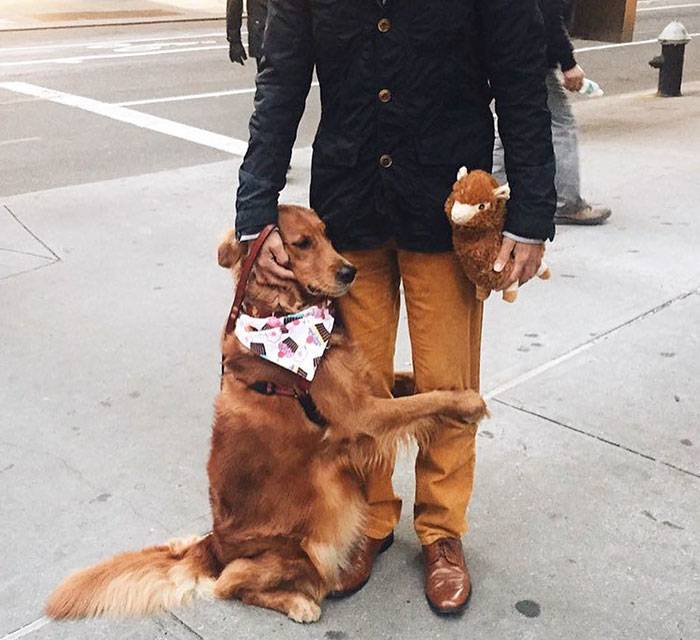 People couldn't get enough of Loubie and her hugs. "Pictures started coming up on the internet," Fernandez-Chavez said. "We would walk normally for 20 minutes but now we walk for 2 to 3 hours every afternoon and then again in the evening." People take her picture when she is hugging Fernandez-Chavez or a passerby and share them with friends, and she seems to love all the attention.

The Golden Retriever, who is named after a French shoe designer, already has more than 58k followers on her Instagram account. “A lot of people say she’s made their day… Like, if they had a bad day at work, maybe that’s just what they needed,” her owner says. he claims he started her Instagram account because so many people were sharing her pictures with him and then reposting them to their friends. 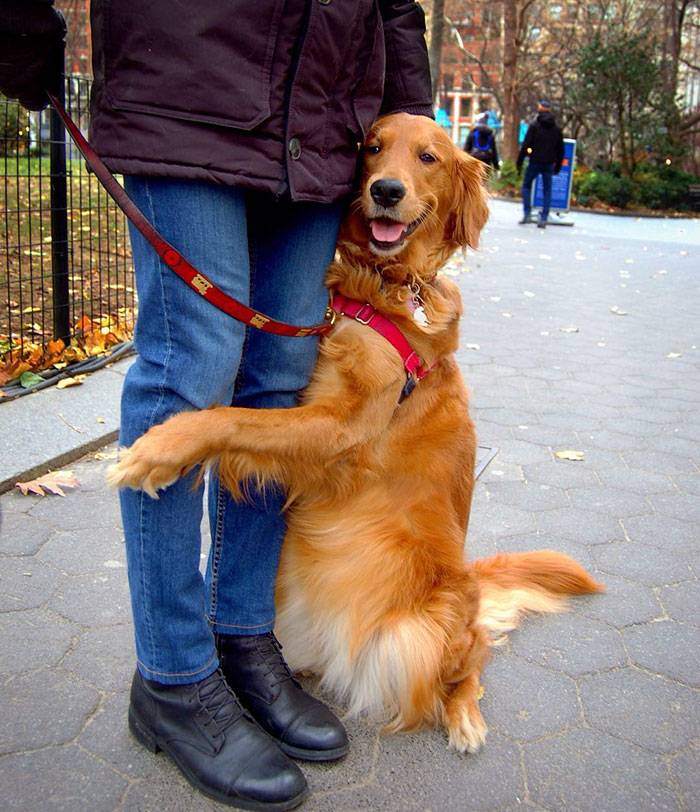 While Loubie is quite generous with her hugs, she doesn't just hug anyone — she only hugs people she makes a connection with, according to Fernandez-Chavez. "Sometimes people run up and ask for a hug, but I tell them, 'I don't think it's going to happen,' because she has to bond with that person first," he said. "But when she sits next to someone, then I say, 'You're probably going to get a hug.'" 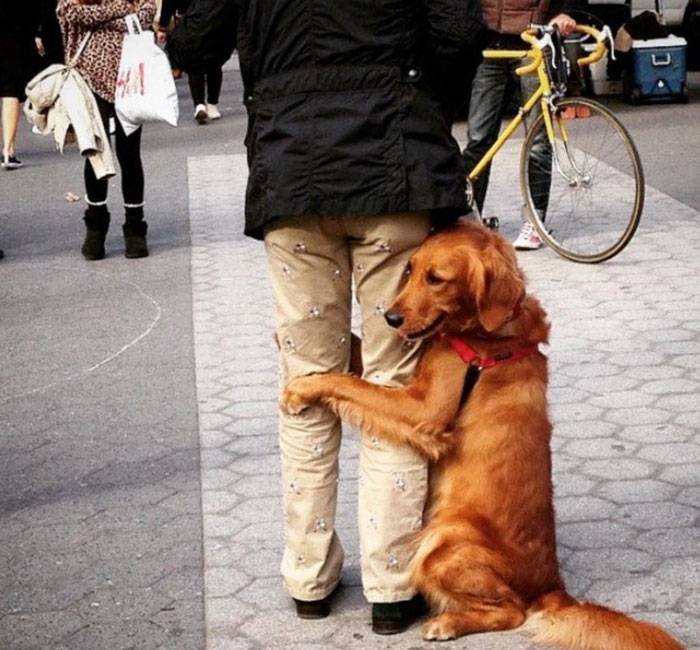 #10 The World Needs More Affection Like Lubie Has To Offer

"It's nice to see people walk away with a smile," Fernandez-Chavez says. "Especially with everything that is happening now, people say it's so good to see this on the street. She's bringing them joy. It's very rewarding." 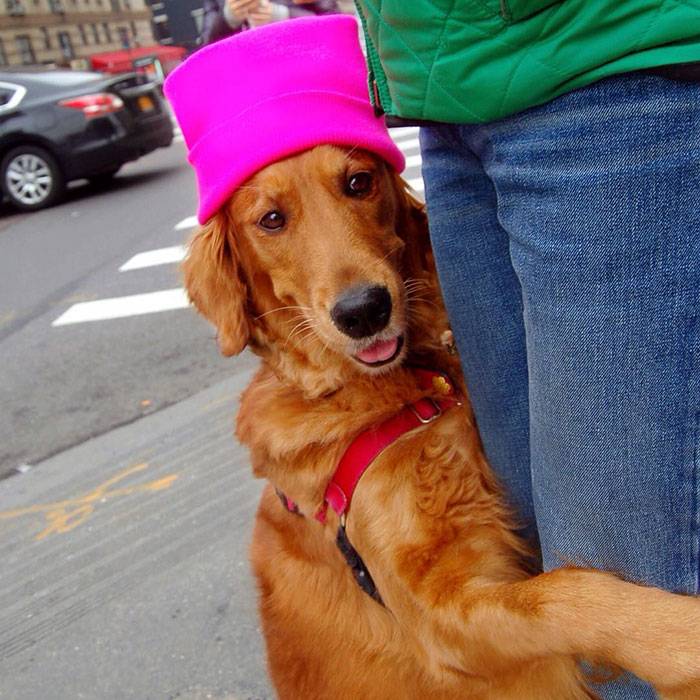