This Woman's Teddy Bear That Had Her Late Mother's Voice Recording Was Stolen By Thieves, Ryan Reynolds And Many Others Help Finding The Lost Item

This young woman got robbed of one of the precious items of her life and the way the Internet has joined hands together to help find her the item is not only commendable but it also restores our faith in humanity. Mara Soriano, a 28-year-old storyboard artist from Vancouver, Canada got robbed of a special bear which was a gift from her mother who had passed away from cancer and had a built-in voice note of her mom telling her how much she loves her. 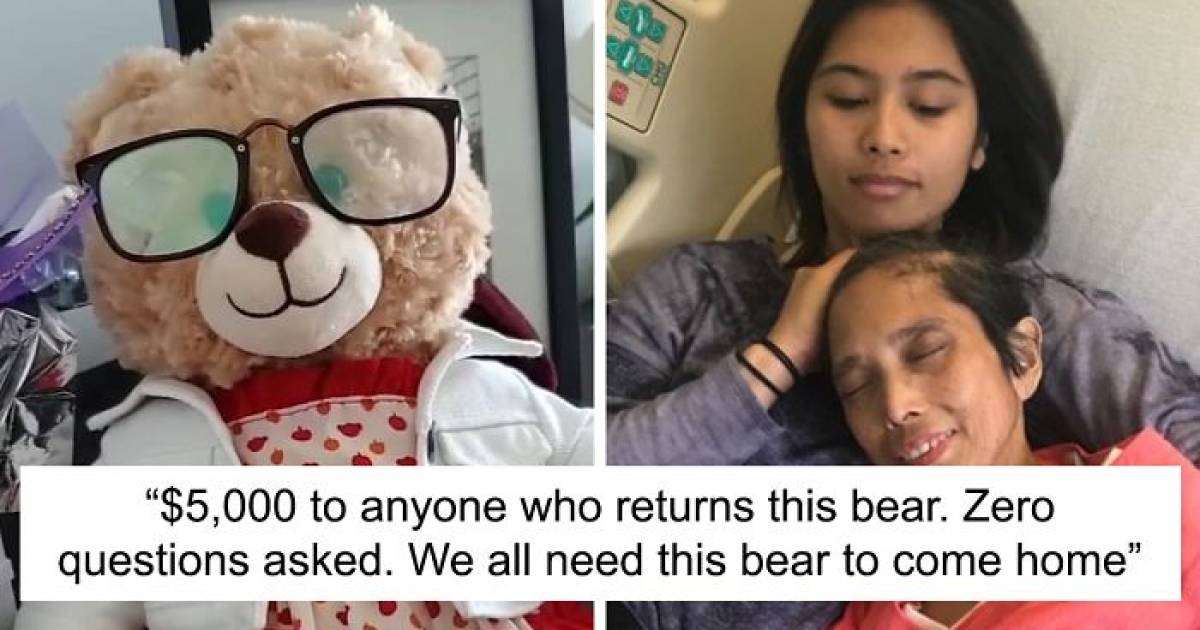 #1 Mara Soriano recently had her Build A Bear stolen, which was a gift from her mother who had passed away

If you have ever been robbed then you are probably aware of the ugly feeling that settles in after the incidence. Getting robbed is never a pleasant experience and usually leaves one heartbroken especially if they lose a valuable item or their hard-earned money. Mara Soriano, a 28-year-old storyboard artist from Vancouver, Canada was recently shifting apartments when she and her fiance were unloading the moving truck, Mara got a call from a friend who was on their way to help but unfortunately got into a cycling accident. 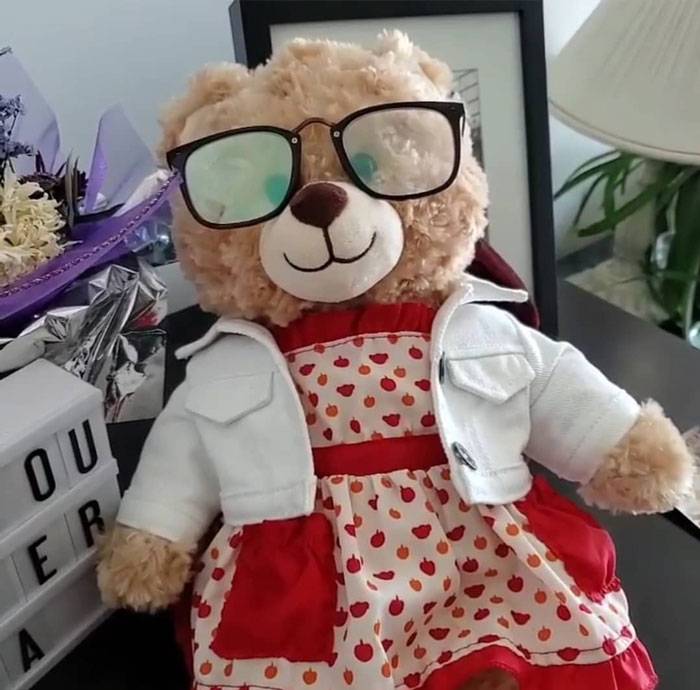 Hearing about her friend's accident, Mara immediately rushed to help her friend and at that moment even left her bags unattended. Unfortunately, those few moments were enough for someone to pass by and rob Mara's personal belongings. 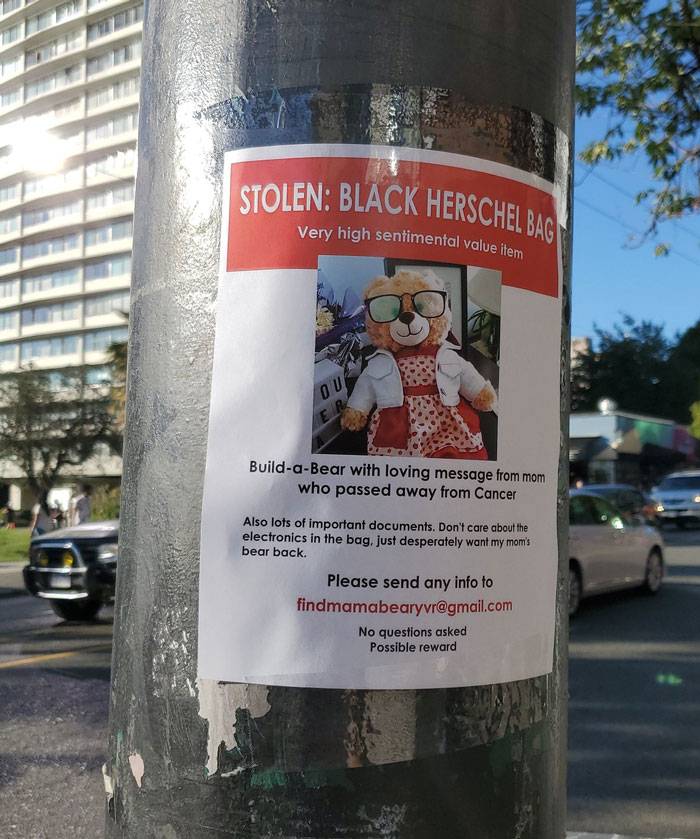 “My fiance and I were moving into a new apartment with the help of our two friends. We rented a uHaul truck to bring all of our belongings over, one of our friends decided to bike over to the new apartment and meet us there. As soon as we got to the loading bay however, we got a call that my friend was hit by a van! Of course, I started to panic, he was on his way to help us after all, so not only was I afraid that he was hurt, I also felt responsible,” explained Mara.

She continued: “I ran out of the uHaul and went to see my friend immediately, I dropped everything I had and just assumed my fiance would pick up the backpack full of important items. Unfortunately, the backpack was in front of the uHaul and my fiance and the other friend were in the back unloading, so he didn’t even realize that the bag was there to get. Thankfully, my friend was okay, but by the time we realized the bag was gone, it was already too late.”

#3 Mara turned to the internet for help, hoping that she could at least get her precious Mamabear back

The bag contained a number of things, including passports, SIM cards, a Canadian Citizenship certificate, an iPad full of videos unfortunately not on iCloud, and a Nintendo Switch. Most importantly, it contained two things that Mara’s late mother gave her before her passing—a Mickey Mouse wallet and a Build a Bear teddy bear.

Among these items, the bear was the most precious for Mara not only because it’s a memento that her mother gave the Christmas before passing away after a 9-year-long battle with cancer, but because this bear had a built-in module with her mother’s voice saying that she loves her, that she is proud of her, and she will always be with her.

Here's the video, I know it's not the best angle, but i'm working on putting the other two up. This local restaurant, Gurkha was extremely helpful and cooperative! SO GRATEFUL for their help!! Please send them my thanks next time you eat there!! pic.twitter.com/YGdpUwr4v0

UPDATE: Footage of the back alley, he put the backpack on his front. He was wearing a hat and kept his head down. This is him for sure!! pic.twitter.com/eAgMzLzR2D

#5 The thread was updated with the actual theft footage

UPDATE: ACTUAL FOOTAGE OF THE THEFT! When I dropped the bag, my fiance was still in the alley, not inside, so it would have been right beside the uHaul cabin. This happened just after he pulled into the loading bay. pic.twitter.com/6eoGzVVr2t

So, after the incident, Mara went on social media appealing to the internet for help in finding the stolen belongings. She has posted a picture of the teddy bear with the caption of where, when, and what was stolen. She also put up some video footage (video one and two) from the security cameras in the vicinity that have caught the thief on tape.

And the internet took it upon itself to be the detective and the support that Mara needed so much at this crucial time. News of the stolen teddy bear spread online like wildfire, with CBC’s Deborah Goble urging people in Vancouver to be on the lookout for a Herschel backpack with the abovementioned belongings in the West End. 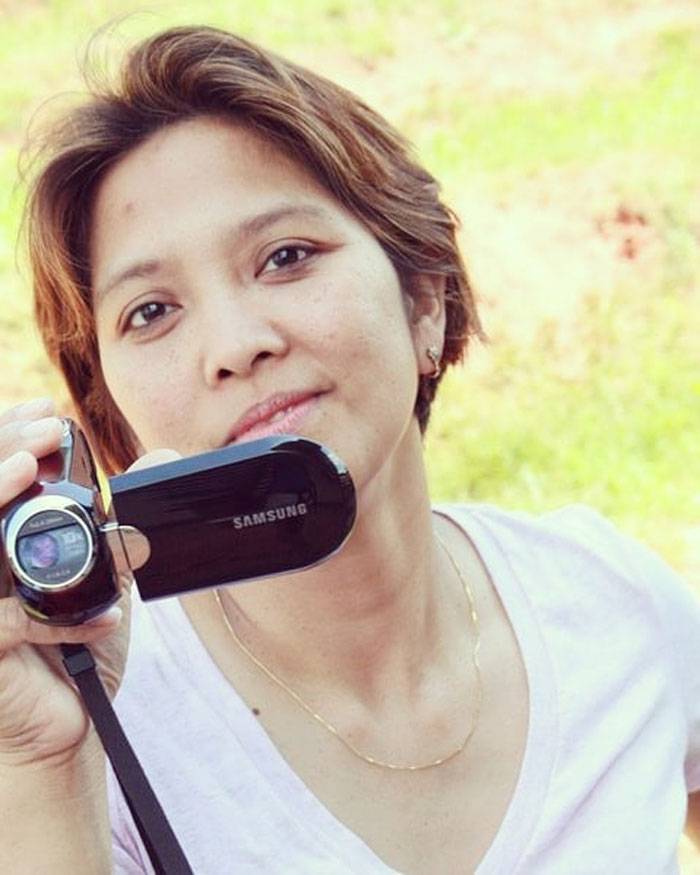 The news spread on social media like wildfire and everyone was on the lookout for the thief. The search took a new turn when Canadian actor Ryan Reynolds decided to play his part in search too and offered a 5,000 dollar reward to whoever finds and returns the bear. His tweet read: “$5,000 to anyone who returns this bear to Mara. Zero questions asked. I think we all need this bear to come home.” A number of others, including PJ Byrne and Zach Braff, have also joined the cause and spread the word in hopes of reuniting the bear with Mara.”

Mara was left in awe at the response that her plea for help got. Not only was it making headlines all over the continent, but many have made it their mission to find the bear, as explained Mara:

People from all over the world have expressed their sorrow with me, and people in Vancouver have made it their personal missions to find this bear with me! I’ve been so busy keeping up with media outlets and putting up posters that I haven’t had the time to keep my eyes constantly open for possible postings on Craigslist or Facebook Marketplace and I’ve had so many people who have volunteered to do that.” 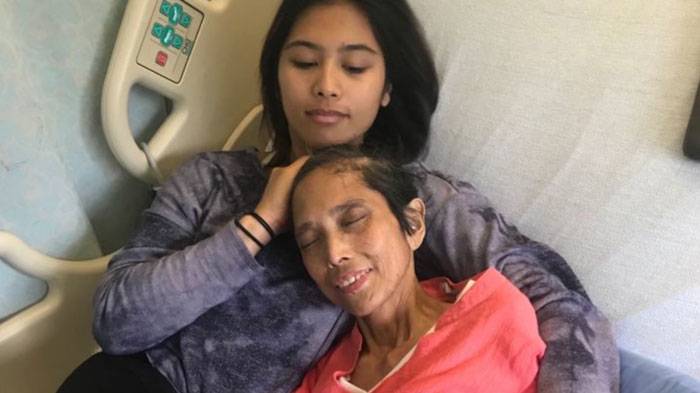 #8 Everyone joined hands to search for the lost Mamabear 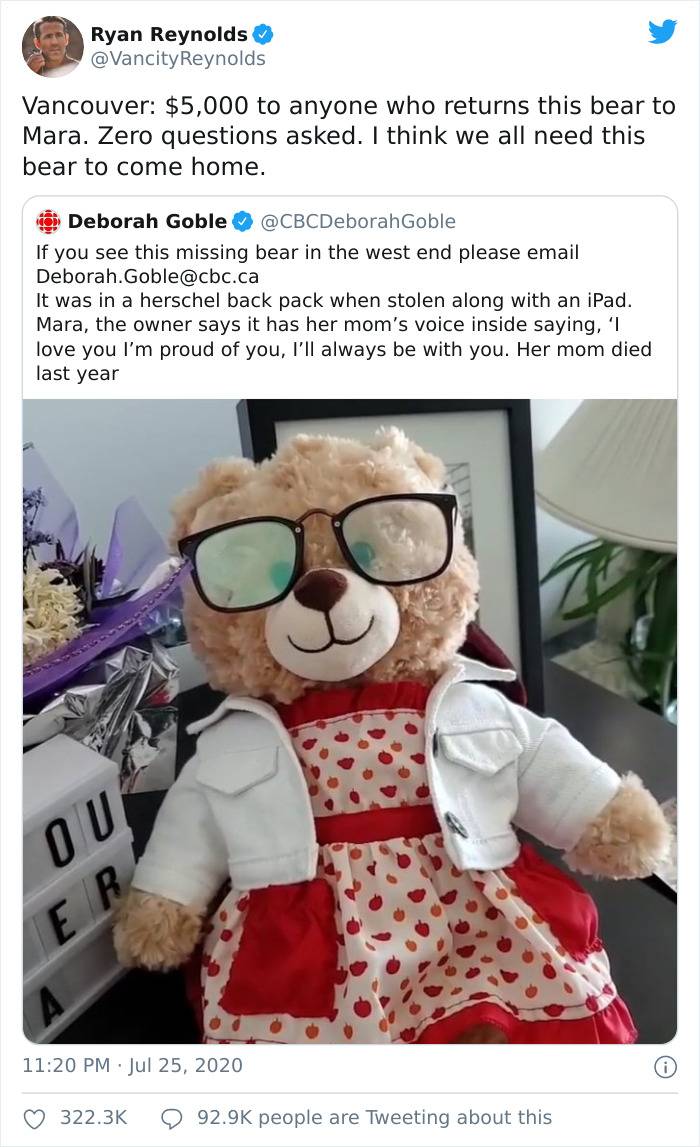 #9 Many others joined the cause by either retweeting, getting involved in the search or offering help directly 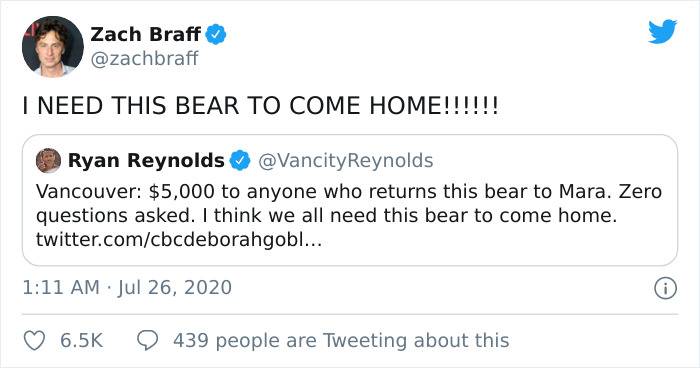 “So many people have offered to foot the bill for a new Build a Bear, someone was even so kind as to remaster the recording I have of my mom’s voice! It’s so wonderful and I am so humbled and grateful. I wish so badly I could tell my mom about how so many people came together so that I could be reunited with my Mamabear.

Talking to Bored Panda, Mara told that it has been rather chaotic since the search began. Besides all of the media outlets covering the story and adding to the many eyes that are on the lookout on the streets, Mara has also been hanging up “missing” posters and talking to local restaurants and shops to see if they can provide any info regarding any leads as to where the thief is.

“So far, we’ve been able to figure out the direction that he went, and the iPad even pinged last night, so we know the last known location of it! Unfortunately, it was in a particularly bad part of town which probably means the iPad was sold off to someone else, the original thief must no longer have it,” elaborated Mara. “This, however, means that maybe the bear might be in that area of town? Who knows, we’re definitely making an effort to keep searching, but so far, nothing yet.” 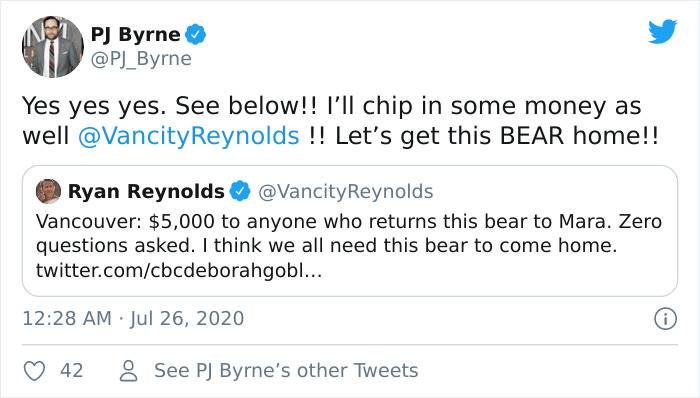 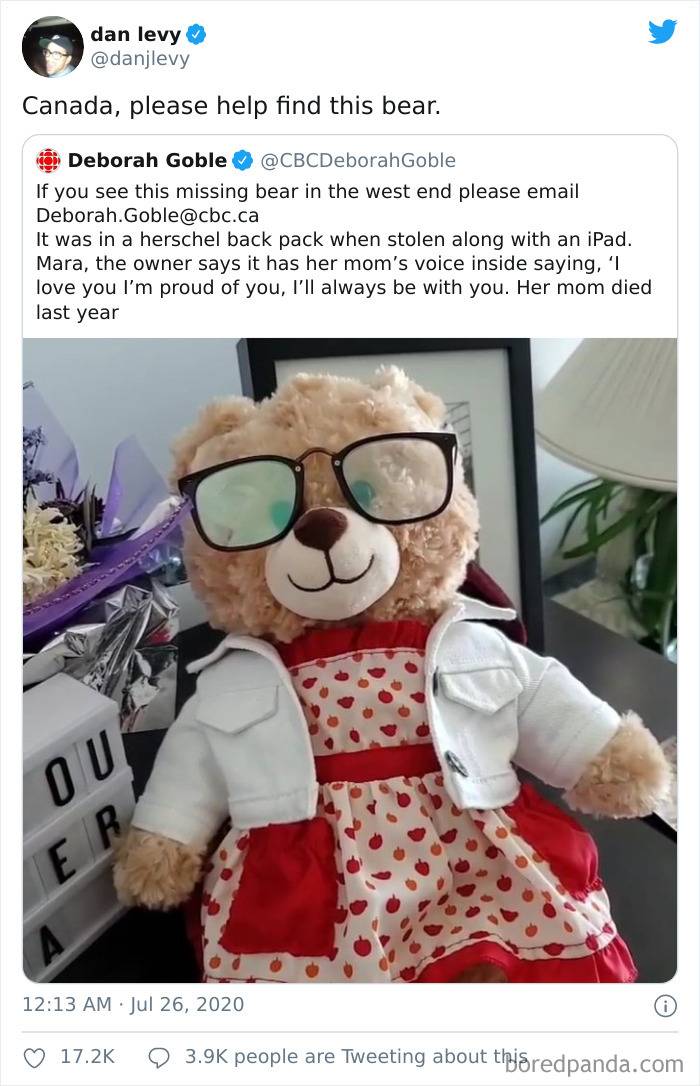 The search has been unfruitful so far but with the effort put in by the people Mara says there is hope, Mara: “If worse comes to worst, I’ve definitely been thinking of recreating the bear with the voice recording that I have. Unfortunately, it won’t have the same heart or the original voice recording in it, but now, not only would it remind me of my mother and how much she loved me, it would also remind me of how the world came together for a few days to do something good.”

Mara also expressed her deepest gratitude to all who reached out to help: “I know this was in part my fault, but people have been so kind that it is honestly making me feel a bit better and I am so grateful for it. I don’t know how I could have made it through this ordeal without the outpouring of love and support from everybody. Thank you from the bottom of my heart.” 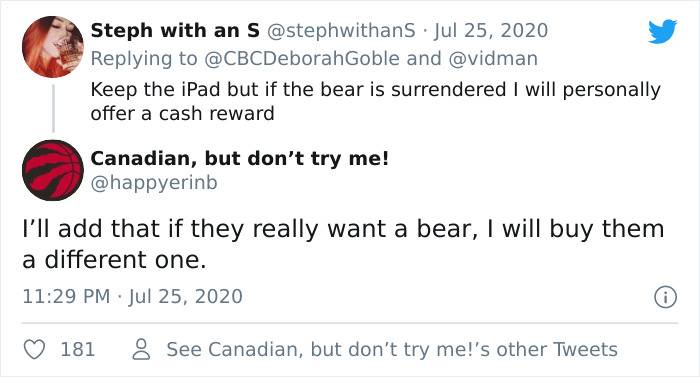 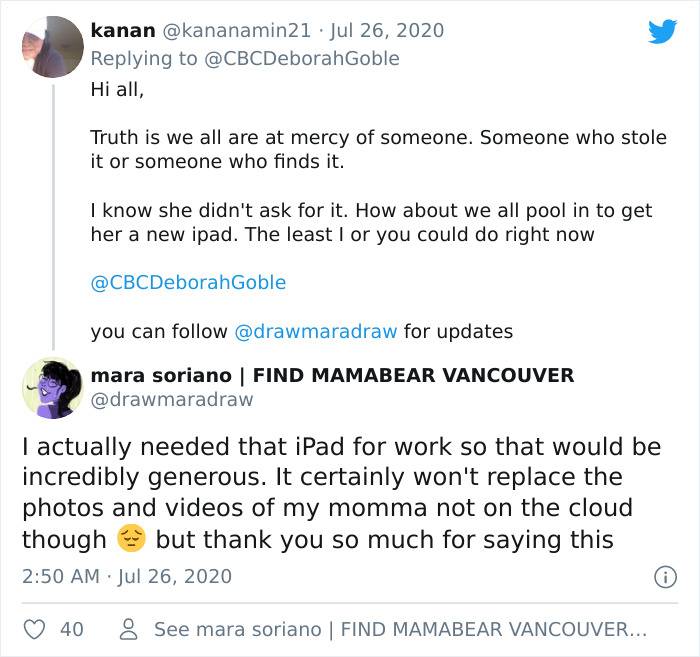 #14 This is how the Internet reacted to the news 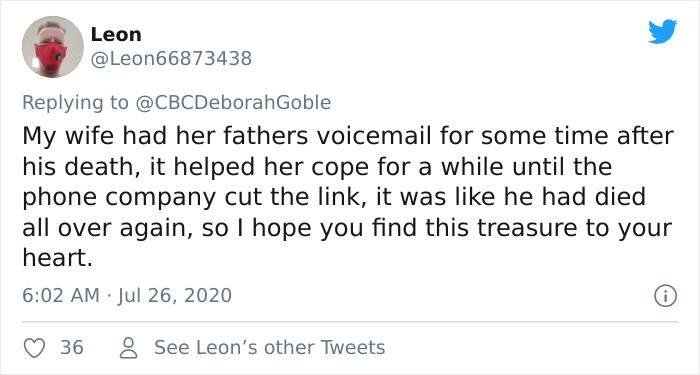 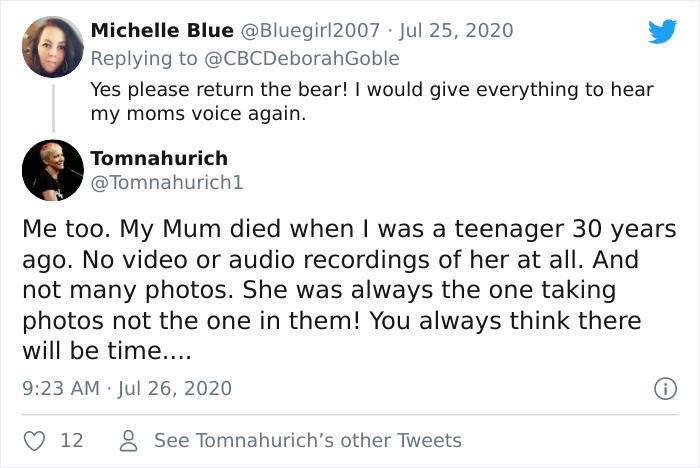 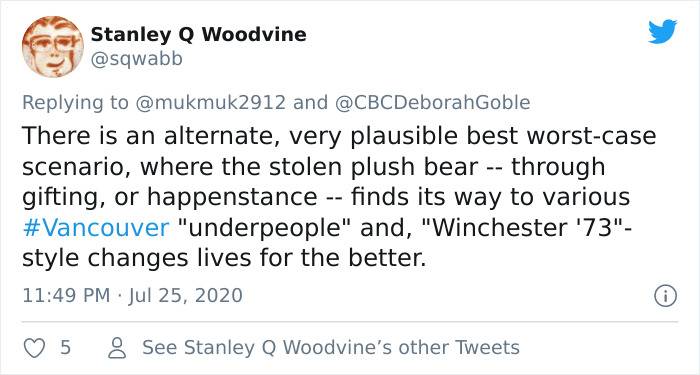 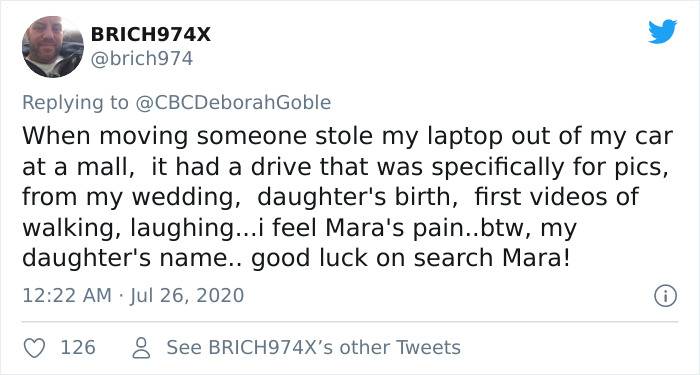 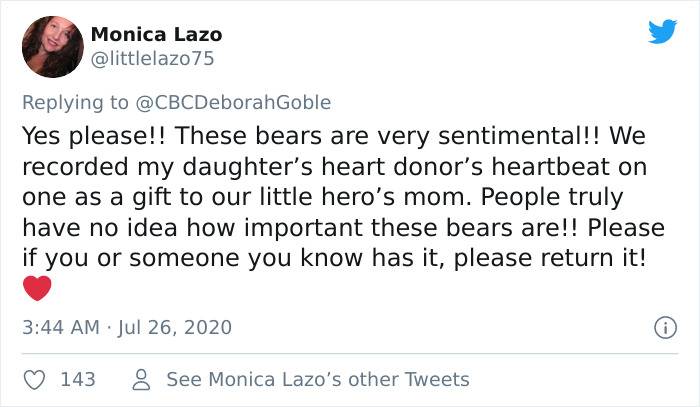 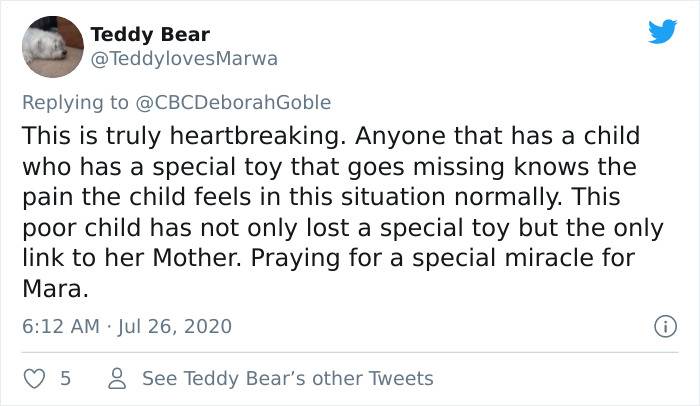