Posted by Abdul Rafay in News On 9th February 2021
ADVERTISEMENT

Two men gatecrashed a pro-vegan rally for a TikTok video in the CBD of Melbourne. In front of vegan campaigners, Nick and Bill were filmed eating a KFC Zinger Box. The video has been viewed over three million times and has divided viewers. Some people commented in favour of tik tokers while some severely criticized them. 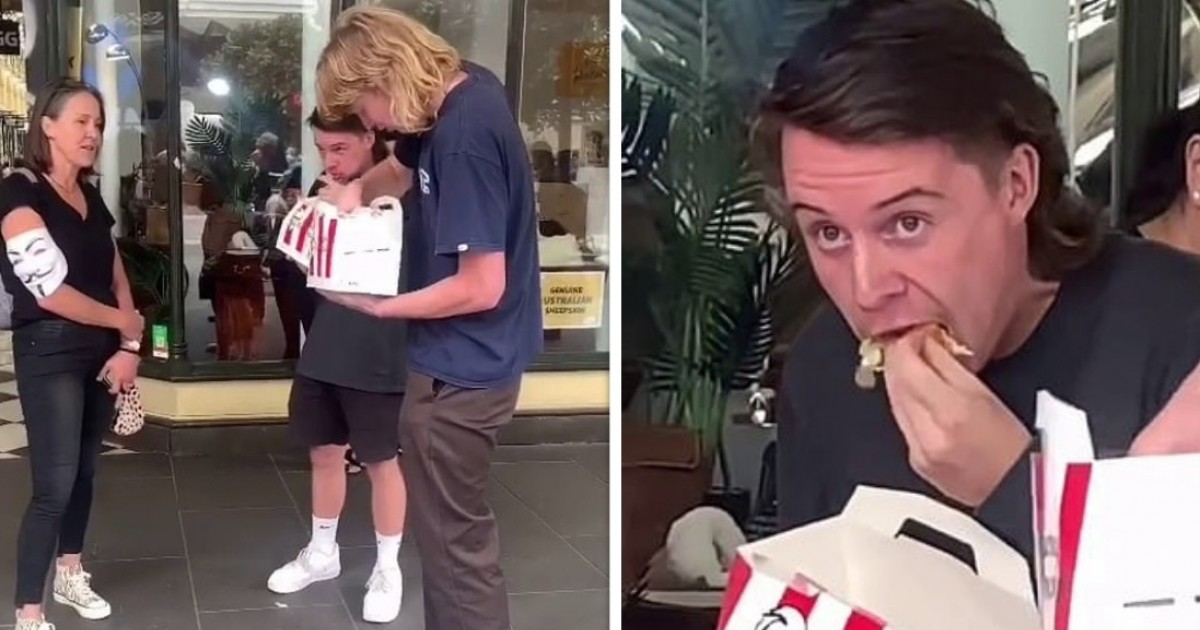 By eating a KFC Zinger Box in front of the plant-based activists for a TikTok video, two men gatecrashed a pro-vegan rally in Melbourne's CBD. Nick and Bill, who on the social media platform have more than 85,000 fans, were filmed standing side-by-side as they devoured deep-fried chicken. 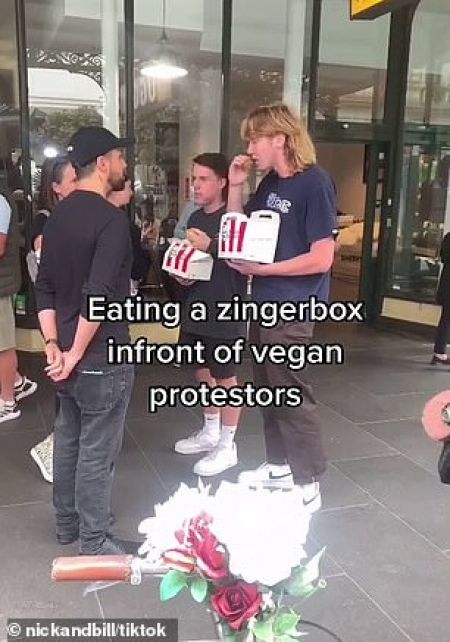 Text overlaid the video read: 'Eating a Zinger Box in front of vegan protesters'. The video started with one of the men being called a 'moron' by a vegan activist and asked if he thinks what they're up to is 'funny'. 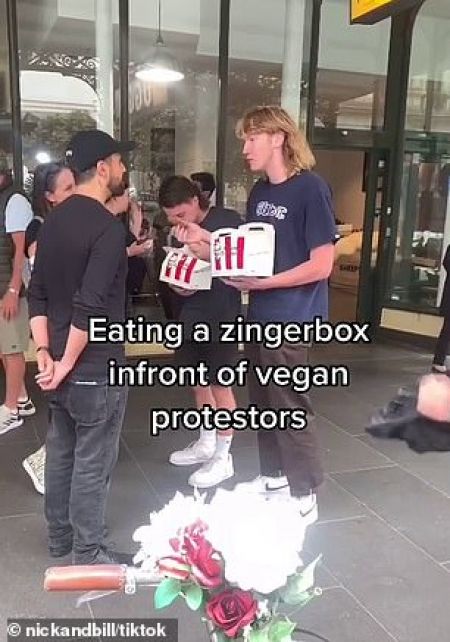 TikToker Bill, who has long blonde hair, then displayed a piece of chicken and asked: 'Mate, do you want a bite?'

The activist responded calmly: 'I answered your question, didn't I? I said no.'

Bill said 'better luck next time' and bit into the piece of meat. 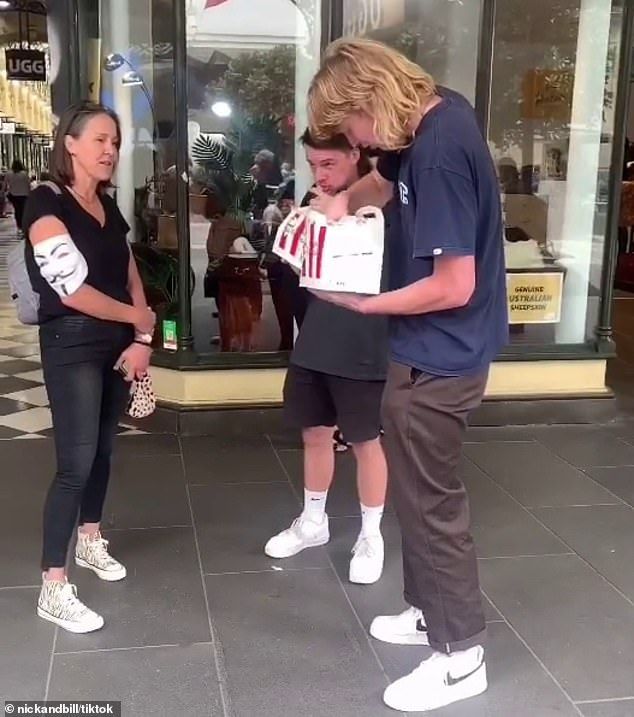 The activist then said he was glad that their event had been gatecrashed by the TikTok duo.

'I appreciate these guys being here, it's creating a spectacle for others,' he said.

Before telling the social media stars why she adopted a plant-based diet, a fellow protester agreed with his sentiment. 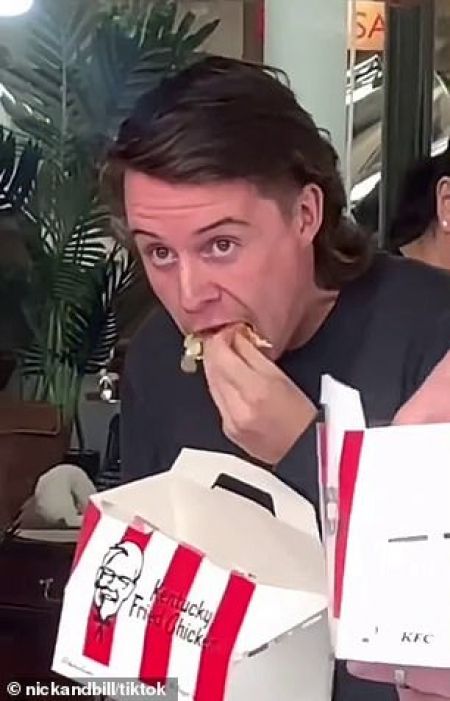 As the woman continued to speak about veganism, the two men stuffed their faces with burgers.

Along with the hashtags "anti-vegan" and "vegan teacher," Nick and Bill captioned the TikTok "not all superheroes have capes." 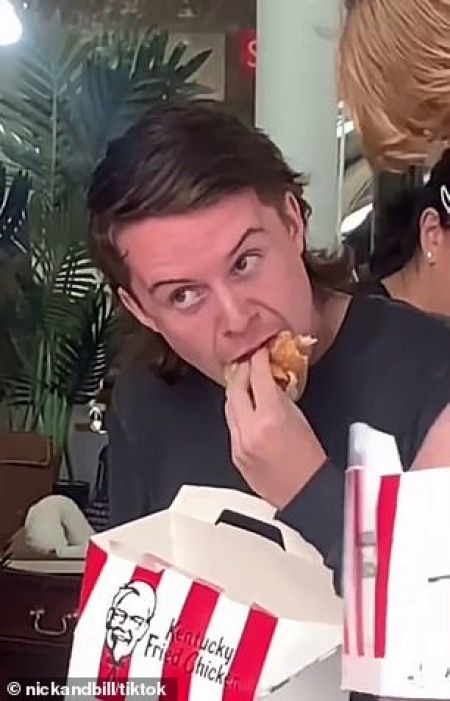 With many commenting that the TikTokers are free to question the vegan activists, it has sparked a new debate about the plant-based diet.

'They're pushing their veganism on the public, so what's wrong with what the boys are doing. Freedom people,' one person wrote.

'If they're pushing their ideas on us, we can push our ideas on them,' another commented.

A third said: 'Not all heroes wear capes, some hold Zinger Boxes'.

But the display was declared insulting by others.

'This isn't funny or cool, I'm not even vegan but it's about respecting others,' one wrote.

'I am not vegan and never will be but I will never disrespect someone just because we have different views about something,' another said.

'They're not disrupting anyone and they were being polite why did you go out of your way to buy food and eat it in their face and film it that's weird,' a third commented.

Not all super heroes have capes #vegan #antivegan #veganteacher